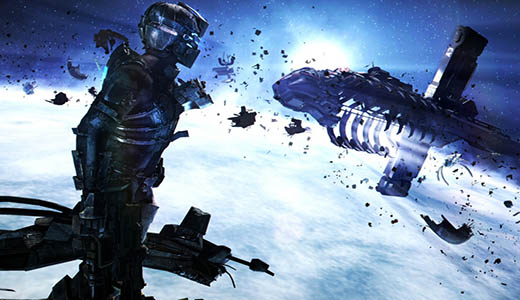 After the wide spread success of survival horror gems Dead Space 1 and 2, Isaac Clarke returns to action to fight off the Necromorph horde in Dead Space 3. But does this tweaked threequel manage to reach the lofty standards that the original two games set?

From the outset, something just isn’t quite right about Dead Space 3.

The game opens with a patched together monologue from one of the games characters, detailing the events of the past two games in the same way a TV show might briefly detail the events of a past episode. I’ve played and replayed both of the first games, so knew practically everything I was going to be told, but couldn’t help but feel like it’s a lot of information to cram into a short cutscene. 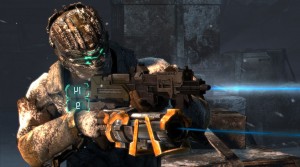 story shorter – Isaac Clarke has been driven to rock bottom by his knowledge of the alien markers that fueled the plot in the first two games – giant, monolithic structures that have the potential to offer humanity limitless clean energy, with the notable downside of turning everyone around them into hideous undead monsters.Isaac is roped into helping deal with yet another marker, this time on what the group who contact him believe to be the home world of the alien race.

And this is where the issue first reared it’s ugly head for – the group.

In Dead Space 1 and 2, Isaac was a generally solitary figure.

Dead Space saw him alone on a ship, grappling with his sanity in the bowels of a massive spaceship with no one around to help him and the odds stacked against him, making for some of the most generally scary and unnerving moments in a video game I’ve ever experienced. 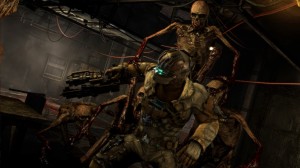 Dead Space 2 saw Isaac take to the Sprawl mega city, and the ravaging effects of the Necromorphs could be seen in all their terrifying glory, but Isaac was still on his own, primarily.

True horror comes from the fear of the unknown – what’s lurking around the corner, what’s about to leap out at you. Giving Isaac a posse which he’s essentially always in contact with, making decisions as part of a group to achieve a team objective, essentially fills the silence in the game, and it feels as though there’s nothing at stake. With this, the horror element drops away massively and the entire game feels weaker as a result. The new co-op mode, while fun, does little to detract from this feeling. This has become quite a popular complaint amongst fans of the series, and has really stolen focus from the fact that Dead Space 3 is still pretty good – it’s just a different type of game then what we’re used to. 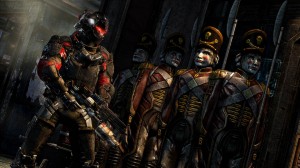 inclusion of these characters wouldn’t necessarily be a bad thing if the supporting characters didn’t all read like token additions to the cast of an action movie – the gruff, unreasonably grumpy soldier, the foreign scientist, the love interest, the grunt.

Often their dialogue will border into downright cheesy, which is a shame, because the over-arcing story elements that Dead Space 3 offers are actually pretty excellent, continuing down the path of fanatical religion that the first two games touched on, and the lengths humanity will go to to define itself as a race. These are drowned out by some pretty cliché and predictable plot points in the foreground, but it’s a solid enough story to make it through main campaign at least once. 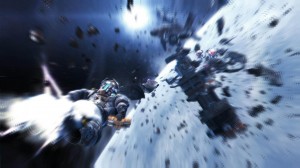 Luckily, everything else that makes Dead Space so good has returned – namely the incredible graphics and powerful use of music to add to the mood. And even though the game strays from it’s roots of claustrophobic and haunting indoor environments, which is arguably an ill advised move, the game consistently looks great, and does it’s best to keep a sense of suspense around the combat, even if full out fear like the last games offered isn’t really an option anymore.

Nothing about the games controls or interfaces will surprise you if you’ve played the first two games – they’re primarily identical in feel, and this is a pretty good thing for the most part.

Unfortunately, for some reason, EA has decided to turn this game into a shooter, with RPG and resource managing elements. 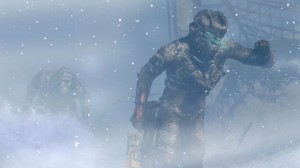 nothing inherently wrong with that – there’s no reason that wouldn’t be a fun game, it just goes against everything that made the first two games so uniquely great. Isaac Clarke is specifically designed to handle chunkily – he feels like an engineer, not a soldier, so that fighting off Necromorphs was always a tense and overwhelming experience. And the weapons were generally tools he’d found and repurposed, not actual constructs he’d built out of things he’d found.

Putting him in a shooter – having to rely on cover, dodge grenades and fight humans who can flank him – kind of just feels unfair. He’s not built for that, he’s not the Master Chief and certainly doesn’t play like him, so gameplay can get very frustrating at times. Like I said, this doesn’t make Dead Space 3 a bad game, it just severely limits it’s overall aesthetic towards being a survival horror. 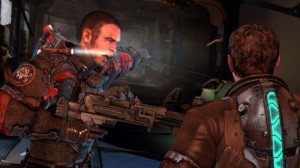 The other major talking points about DS3 has been the inclusion of micro-transations.

In Dead Space 3, resources pretty much control the options you have to play the game. As you work your way through the variety of landscapes, you collect tungsten, semi-conductors and all other varieties of engineering-sounding goods that can be used to upgrade and create weapons, as well as modifying your suit.

However, these resources are cripplingly rare, to the point where halfway through the game I was still only using an improved version of the gun you start with, because I lacked the resources to build anything better.

Add to the mix that EA has inbuilt the ability to allow you to go on Xbox Live or PSN and buy resource packs, and the entire thing really bugs me – I felt like I was being punished for not shelling out the extra $16 to get a full stock of building resources, and as a result wasn’t entitled to play the game at it’s full potential.

Don’t get me wrong – Dead Space 3 is, in it’s own right, a perfectly good game. It’s well put together, it’s beautiful and it’s generally pretty entertaining. I just can’t help but feel that fans of the series who were looking for the visceral survival horror that the first two games offered will end up feeling somewhat slighted by the shooter-RPG hybrid that EA has delivered on this outing.