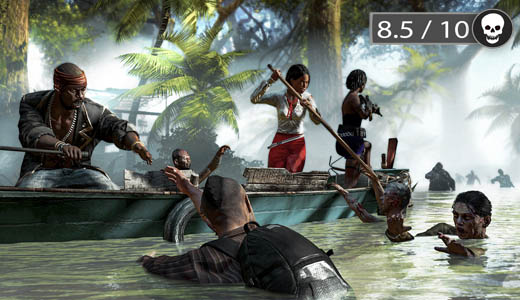 Two years ago Techland’s co-op first-person zombie slasher, Dead Island, surprised us all. Coming seemingly out of nowhere the game garnered a sizable amount of praise, in spite of arriving with more than its fair share of bugs.

Dead Island: Riptide is the direct follow-up to Dead Island, offering up some more zombie infestation in otherwise exotic holiday destinations. As with the first game Riptide is an open-world first-person zombie shooter/puncher/stabber/slicer/kicker and/or whatever else you can get your hands on. There’s also a pinch of RPG skill and stats leveling, as well.

Having escaped the zombie-infested island paradise of Banoi, including the brief excursion to the town of Moresby on the mainland, our four survivors find themselves the prisoners on the very ship that they though would be their salvation. Fascinated as to why they are immune to the zombie outbreak, the scientists on-board the ship drug and test our hapless survivors. Of course, when they awake the ship is – you guessed it – overrun by zombies.

And so it begins again. 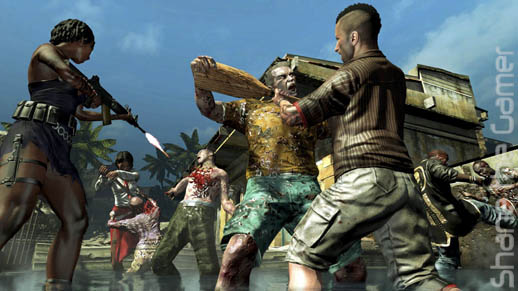 The on-ship sequence serves as an intro to the game’s make-shift weapon mechanic as you search for items to fight the zombies with. At the same time your immediate task is to find a way off the ship whilst helping the other crew members to try and save the stricken vessel. Not surprisingly, you fail at both and end up shipwrecked on another tropical island paradise: Palanai.

This time you can play as one of five characters, one more than last time. You can choose from American football player Logan Carter, rapper Sam B, hotel clerk come Chinese spy Xian Mei, Australian bodyguard, Purna or newcomer John Morgan- a former member of the Australian Defense Force. 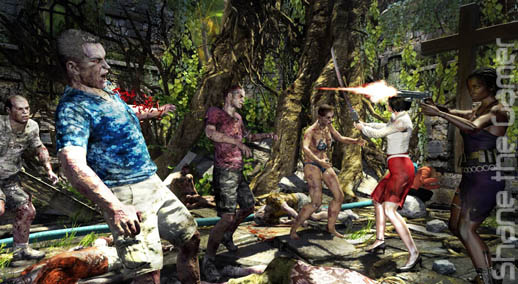 The game is intended to be played online with four players in co-op, but that rarely happens in practice. If you select the online option, your game is join-able by other players that are at the same point as you in the game. As with the first game, I’ve only actually ever managed to team up with one other player at a time. Whilst the game is fine to play solo, it is is written as if the lot of you are there, with your teammates appearing out of nowhere during cut scenes and interactions; with non-player characters referring to your absent colleagues as if they are standing next to you. It is odd and a bit annoying. The game is crying out for the same sort of co-operative AI buddies found in the Left 4 Dead games.

Whereas Banoi from the first game was an upmarket resort island, Palanai is more your rustic self-catering, camping and back-packers sort of vacation island. It still looks beautiful, serving as a poignant contrast to all the spilled zombie blood and guts. As with Banoi, Palanai isn’t all sunshine; with the weather dynamically changing, sometimes as little too quickly. 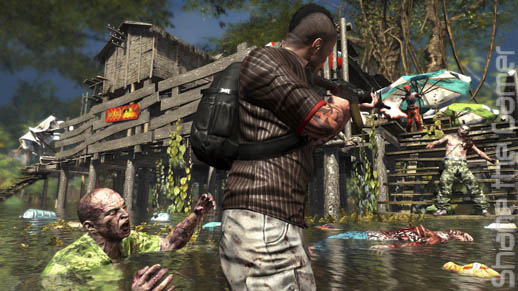 As with its predecessor, Dead Island: Riptide is set in an open-world environment. The game’s story is progressed by carrying out a series of quests that take you across the island and beyond. There are also plenty of side missions to stumble upon during your travels. They are all basically fetch quests whereby survivors want to you to collect items for them in exchange for help, items or access to new areas. They are, however, logical written and backed up by a reasonable plot. Traveling from A to B to fulfill requests never seems to get old, perhaps due to the richness of the island environment which has been beautifully realized in the game.

Exploration is encouraged with the provision of usable cars dotted around the island. I wasted a good half-hour just driving around running over zombies; a pretty safe way of collecting XP. It’s easy to get side-tracked and lose yourself in collecting upgrades and “testing” modified weapons on the island’s unsuspecting zombie population. 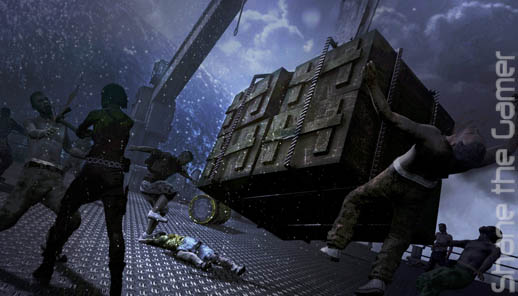 Wandering about the island exploring also yields its own rewards. Stumbling on a solitary campsite with a few hapless zombies consuming a corpse; it’s easy to imagine the chain of events that turned a few good friends upon each other to create the scene before you. But there’s no time for melancholy as you dispatch the undead and raid their former abode for snacks, salvage and ad-hoc weapons.

As with the first game, zombie killing and completing quests earns XP, which can be used to upgrade abilities from one of three skill trees. Skills are broken down into Fury, Combat and Survival. Fury skills enhance your special rage attacks (which become available when you’ve killed enough zombies to fill your rage meter), Combat skills enhance your weapon attacks and Survival skills grant you ability and stats boosts.  The more you use certain weapon types the more accomplished you get. You can level up in blunt, blade, hand-to-hand and firearms. All these customizations give the game a nice RPG flavour setting apart from your usual shooter. 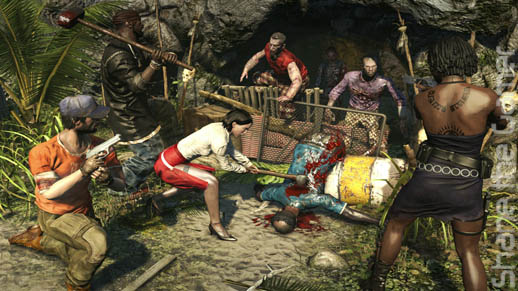 Whilst the combat remains the same; with a swift kick to push the zombies back followed by an attack with your weapon of choice, there are a couple of new moves. My favourite is the jump attack which allowed me to take out a zombie below me with a one-strike kill. It is a move that can be easily abused by jump-killing a zombie, running away from the shambling horde, back up to higher ground, and jump-killing another; rinse and repeat. The other move is the head stomp which can be used on a downed zombie, making it possible to kill a zombie with just your legs; very useful if your weapons are worn out.

It was easy in the first Dead Island to get overpowered by a horde of zombies, especially when playing solo. I felt that Riptide was a little more balanced, and less of a chore to play in some of the more zombie-intensive areas.  Masochistic gamers that like their games to be punishingly difficult will no doubt disagree with this being an improvement. 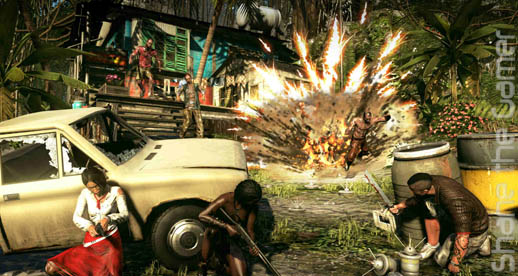 Techland have added a few new zombie types to shake thing up a little. All your old favourites return such as the 28 Days Later-style sprinting Infected and the explosive Suiciders. This outing they are joined by the hideous Ogre, which uses the broken ends of its handless arms to stab you. Disgusting. There are also the Drowners, which can be found lurking in the shallow waters of Palanai waiting to snatch you from your boat. That’s right, as well as driving around you can also take in the zombie infested rivers of this tropical island paradise by boat. With the aid of a nice boost-ability boats can be used to plough down zombies in the same fun way as the cars. There are a few other new zombies, but I’ll leave them for you to discover.

Before all the fun started first I had to contend with tweaking the game in order to get it to run properly (Reviewed on PC). As a dyed-in-the-wool, long-standing PC gamer, the ritual hacking, tweaking and video driver manipulation is second nature to me. It wasn’t long before I had Riptide running without issue and at a visual fidelity far superior than the developers, Techland, had ever intended. 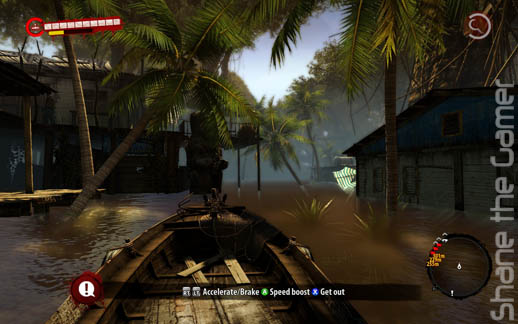 Whilst 90% of PC gamers could probably tweak the game, what about the rest? Another thing, the tweaks that I applied (all neatly packaged up in the must-have Riptide Helper (http://www.theplaywrite.com/tools-and-utilities/tweak-visual-settings-controls-and-performance-with-dead-island-riptide-helper/#more-1241) are basically the same as those required to get the two-year-old Dead Island to run stutter free and with decent anti-aliasing.

Regardless of the above, I enjoyed Dead Island: Riptide immensely. It is basically the same game as the first (which I also enjoyed), but Techland have given us a few more attacks and some extra zombie types to play with. The island is fun to explore, this time by car and by boat. Still, the need to tweak the game is very, very disappointing; especially as the post-tweaked game looks absolutely stunning. 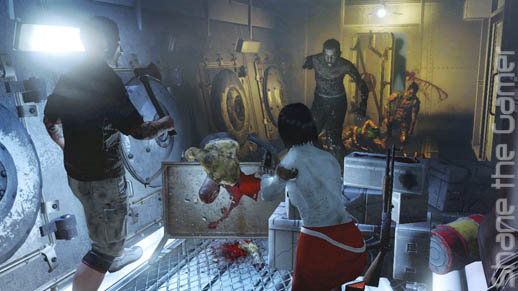 After a bit of patience and a few tweaks Dead Island: Riptide was of the better games I’ve played recently, much better than some of the triple-A tent-pole games out there at the moment. As easy as it would be for me to punish the game for being only 98% complete, I’m not going to. The score below represents the tweaked game running the Riptide Helper on a decent PC gaming rig. I see no reason to dissuade technically competent PC gamers from playing what is essentially a really good game!