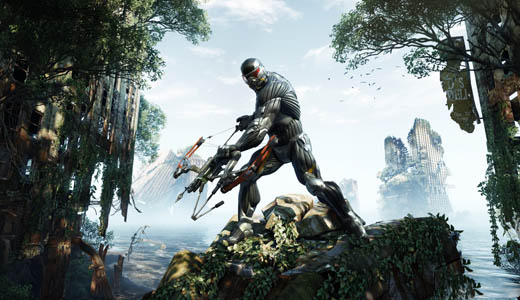 I’m just going to come out and say it, Crysis 3 is, in my humble opinion, the best in the series. This may draw criticism from PC aficionados from which Crysis 1 set the technical benchmark for all future games.

And they would be right.

The original Crysis was a graphical powerhouse which to this day still stresses out reasonable performance PC’s on high settings. But that doesn’t mean the series hasn’t evolved creatively, or even technically since 2007. 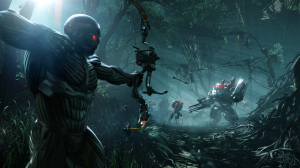 Some would argue that Crysis 2 eschewed the relatively open nature of Crysis 1 for a more linear experience in order to accommodate the more confining console ports. But it didn’t necessarily make the game worse for it, just different – and this is perhaps what made the transition for ardent Crysis fans that much more jarring.

Crysis 3 is fair compromise between the two in terms of its environments.

However levels, though perhaps slightly more constrained than Crysis 1, have been build cleverly enough to actually make ‘multiple paths’ to an objective actually mean something. 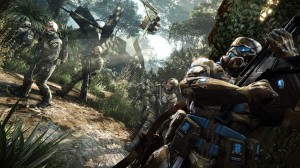 The story, although fairly trashy sci-fi vernacular, places the player in the ultra high-tech Nanosuit of Prophet, who featured heavily as a mentor in the original Crysis and became largely a symbiotic apparition of the Nanosuit in subsequent games.

So 20 years since the events of Crysis 2, and the CELL have created large domes over major cities, in this case, New York. Within the confines of the New York dome a veritable overgrown urban wasteland remains, providing scant evidence of a once thriving metropolis.

With the aid of a Michael Sykes (or Psycho, from warhead), stripped of his Nanosuit you venture on a quest through NY to bring down a tyrannical, hi-tech military corporation known as CELL who are harvesting the energy of a super alien know as “alpha ceph” to basically maintain global domination.

And that’s pretty much it. 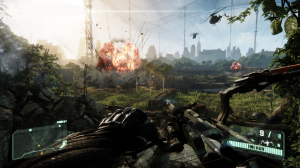 Of course, as the story progresses the question of how much of Prophets human form (Laurence) remains inside the suit is raised, and the need to stifle a re-emergent alien presence is also on Prophets agenda.

As per previous games, the Nanosuit you inhabit provides the abilities of cloaking, armor, strength, and night vision, all consuming precious energy when engaged. These abilities, become the centerpiece for your gameplay style whether it be stealth or weapons blazing. 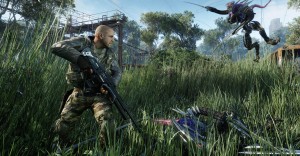 You can sneak through the foliage and surprise unwitting enemies with a brutal melee or charge placement, or you can dole up on armor and tear through everything like an unhinged maniac. Up to you.

Your suit visor when equipped has the ability to tag enemies, and other points of interest for permanent display on your HUD. It also has the ability to mark and hack equipment from a distance such as mines, turrets or weapons caches.

Weapons can be modified on the fly with various rail (scope), barrel and muzzle attachments, which is handy for optimizing for specific combat scenarios. 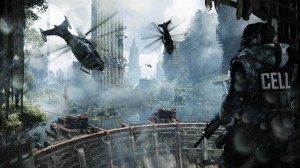 biggest permanent fixture to your weapon arsenal is the predator bow. This further encourages stealth, and with a variety of arrow tips to select from is fun and useful to use in most combat scenarios, provided twitch reactions aren’t required.

Prophets symbiotic relationship with Ceph technology now gives him the ability to wield Ceph weaponry for the first time in the series. These gargantuan, high-powered weapons often mark a direct tipping point in an otherwise overwhelming battle.

However, enemies in Crysis 3 seem to have lost a lot of their battle resilience in place of sheer numbers.

It won’t take much to take down your typical Ceph grunt, and even larger enemies don’t pose an enormous threat on their own. 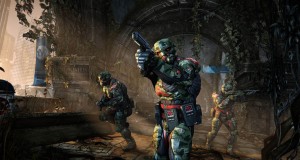 It’s their pack mentality this time around combined with their adept agility that provide the challenge, however little there is.

The Campaign is short. This isn’t necessarily a bad thing, as there are many ways and paths  you can play through the game encouraging multiple play-throughs. But if you generally don’t revisit campaigns more than once, you may feel a little short-changed.

As expected, the game looks great for the most part.

Crytek has done an admiral job of tailoring the exhaustive Cry engine to suit tired console hardware. It’s an anachronistic endeavor for Crytek in some ways, and it can show from time to time. In certain cases the engine feels like it is buckling under the weight causing a bit of frame rate judder – making it every bit apparent that next gen console tech couldn’t come soon enough. 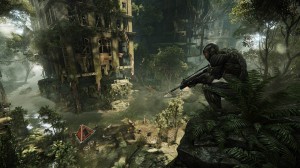 impressive nonetheless, and technical stress only marginally distracts from gameplay.

Multiplayer in Crysis 3 feels largely familiar to Crysis 2, and those who participated in the open Beta pre-launch will know exactly what to expect.

There are 12 maps, all well designed and a library of familiar game modes reframed for the Crysis universe.

The new addition here is Hunter Mode, which pits a permanently cloaked team wielding only a predator bow against a team of CELL operatives with standard weapons.

Round over, roles reverse. It’s reasonably fun, but at this stage most players tend to flock to the more rote game modes. 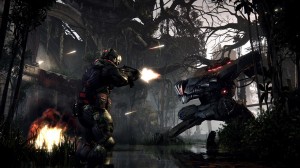 As you’ve experienced in many FPS multiplayers, experience points lead to ranking up which lead to unlockable customization gear.

You can also collect dog tags from the corpses of your kills which act as currency toward killstreak rewards. This is incentive for luring campers out of hiding, and helps immensely with gameplay balancing.

There is a noticeable knock to graphical fidelity in multiplayer, and the heavy handed AI blur across the screen can sometimes make it difficult to identify distant enemies, particularly at low ranks when limited range scopes are only available in your loadouts.

Also, and it may seem a small thing, but finally assists are recognizing the amount of damage you contribute to an enemies death and rewarding you accordingly. 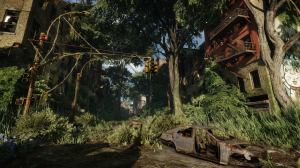 do you feel quite so cheated when after you’ve emptied your clip in to your foe bringing him to the verge of death, a teammate sneezes on him to get rewarded the kill. Dunno why this hasn’t been done till now.

Crytek has borrowed heavily from the Call of Duty multiplayer gamut, with the addition of Nanosuit powers and unique weapons. It’s definitely a fun time-sink after you’ve completed the short campaign and will keep players entertained for a good while.

Overall, Crysis 3 is a great game if marred slightly by technical shortcomings on consoles.

With a brief but fun campaign and a solid and engaging multiplayer, it’s definitely worth your attention.