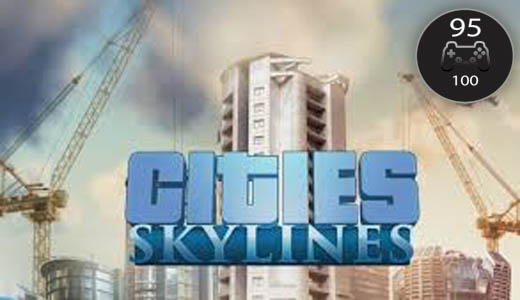 After years of disappointment, frustrated town planner and Shane the Gamer’s Australian editor, Darren Price finds out if this is the city builder that we have been waiting for.

Now I love a good city builder, going all the way back to the original SimCity on my Amiga. SimCity publisher EA and developer Maxis have been tinkering with their formula for decades giving us some hits in SimCity 4, some misses in SimCity Societies and a bit of a disaster in their 2013 SimCity. 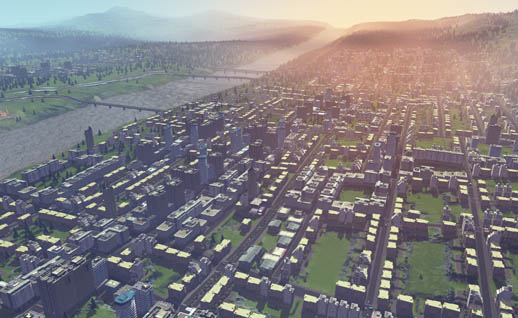 To be fair, despite the launch issues, I still enjoy playing SimCity. It’s more of a SimTown, and it is a bit lightweight, but it’s fun and the regional game adds a bit extra depth.

Meanwhile, Focus Home Interactive have been flogging us yearly versions of Cities XL using the same code that resulted in the demise of original developer Monte Cristo. 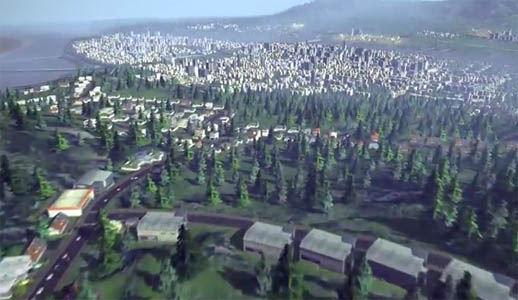 Focus’ Cities games, whilst lacking the polish of SimCity and suffering from some performance issues, is technically far more in-depth than anything EA/Maxis have turned out for years.

So, up to now budding town planners have had to make do with either a small, but perfectly formed lightweight affair in SimCity or the more complex, but fragile, Cities XL. 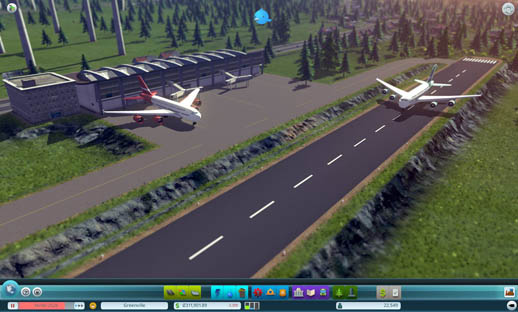 The Finnish developers of Cities: Skylines, Colossal Order, obviously shared the frustrations of many city-building fans and set out to do something about it.

Taking the visual style of SimCity with its impressive model-like tilt-shift camera view and the complexities of Cities XL they have mixed it up to create what I would say is probably the most comprehensive and down-right beautiful city-building game I’ve ever played. 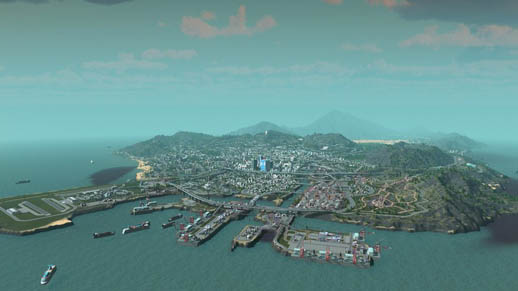 It’s all there: roads, zoning, public transport and electricity, even water supply and sewer pipes.

And the city sizes are huge.

The game starts with a huge square area with a freeway, and possibly a train line (depending on the area), connecting your potential city to the outside world. 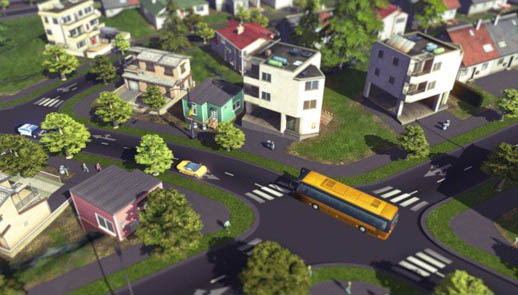 It’s all very familiar stuff and you build your first road, construct utilities (water, sewerage and electricity) and start your zoning.

Not breaking convention, the game uses the same green for residential, blue for commercial and yellow for industrial zones as you’d find elsewhere.

Starting with a few houses, it’ll not be long before new residents demand shops and industry. From there they will need schools, police stations, fire stations and medical facilities. 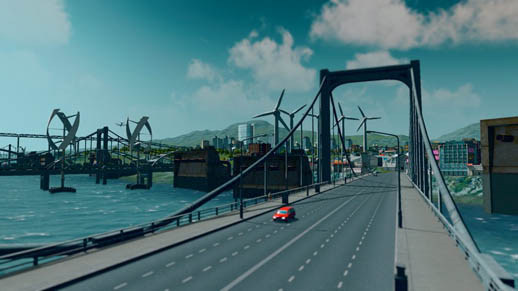 The city develops very slowly. You can speed the simulation up to x3, but if you are not careful things can get out of hand very quickly.

It’s very easy to get ahead of yourself. Later in the game, when I was managing a much larger area, I appreciated the more sedate speed.

It afforded me the time to investigate traffic problems and other urban planning hiccups that I’d inadvertently introduced without having to take a break for some micromanagement. 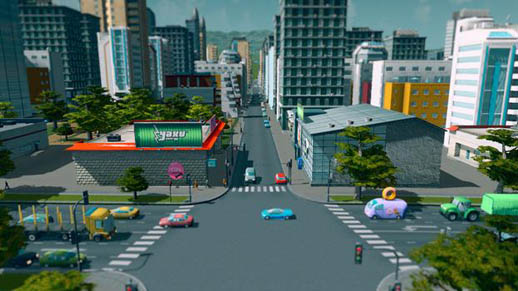 City facilities unlock at sensible intervals as your city matures and the population increases. The pacing is spot on allowing new players to master one set of mechanics before moving on to the next.

This is a great way to introduce what is a complex game without overwhelming players.

With the increased population new zones like offices and high density residential and commercial open up as well as the ability to have industry specialisations. Of course, there’s also a list of city ordinance and budget controls to tweak as well. 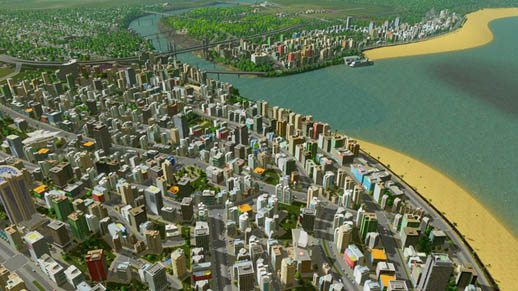 The status if your city is conveyed via a social networking ticker at the top of the screen.

For more in-depth, at-a-glance information you can access an impressive series of overlays showing heat maps that cover everything from pollution to wealth.

Clicking on any individual element like a building or person will reveal more information. All this can be used to tune your city to perfection. 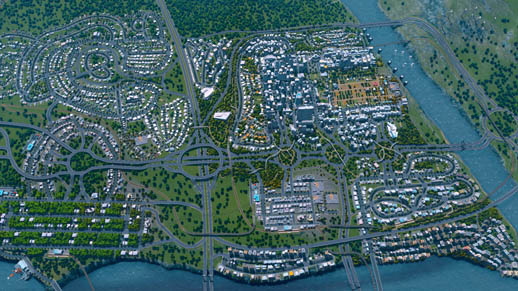 Unlike SimCity, which I always felt was faking most of the simulation, there seems to be some complex logic going on under the hood in this game.

You can see the results of your efforts in sorting out problems, like electricity or water shortages, as they wash across the streetscape. Similarly, with traffic, fixing one intersection may cause issues with another.

At one point my good intensions caused several kilometres of tailback on the main freeway into the city. 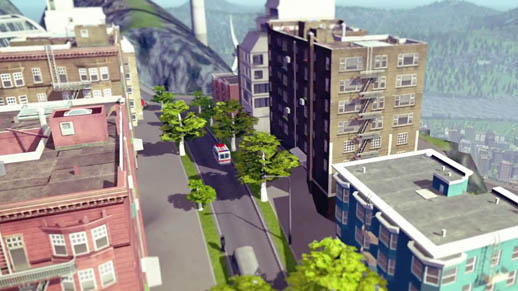 As seems to be the norm with city-builders, Cities: Skylines features a nondescript jazzy/muzak soundtrack that is both grating and somewhat calming at the same time.

Whilst I threatened to turn it off continuously, I never did; so absorbed was I in the goings on in my city.

Whilst on the whole the game is pretty much perfect, I did have a few frustrations. 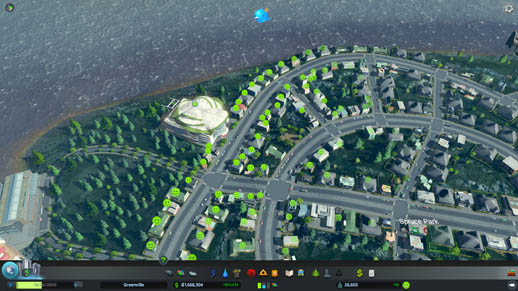 The way the congestion overlay switches itself off when I go to construct roads wasn’t very helpful. I had some problems with Public transport routes not always working for me, with the incomplete “line” still being present (and spamming me with nags) even after destroying the infrastructure.

But on the whole, considering the huge scale of the game the lack of bugs at launch is a major achievement. 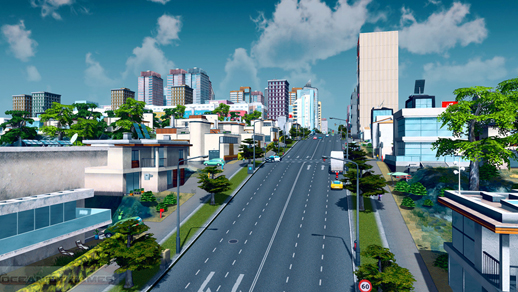 I’m not sure if it was just me being more careful that usual, but the game seemed a tad easier than some of its brethren.

I got the feeling that, whilst it does offer quite a lot of depth, it is designed to be more of a city sandbox than an eye-watering urban planning simulator.

You could argue that there’s not much to do as there’s no missions and no disasters. 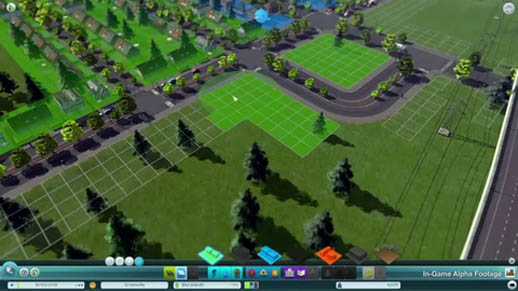 But the game doesn’t need to force a sense of the dramatic, instead it lets you get on with it. The only goal is to build the biggest, most prosperous city that you can. And it does that very well.

The game is like having your own little city model kit.

The city is so beautifully packed with detail you could spend hours just watching buildings getting built and people going about their business. 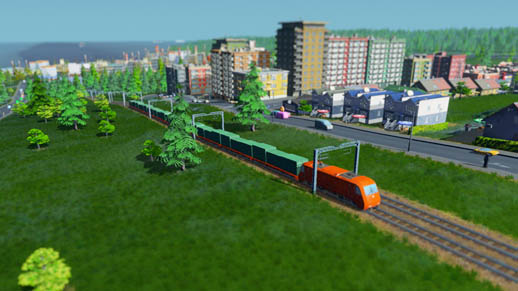 It was the moment I purchase the adjacent regions and quadrupled my already huge area of real estate that the penny dropped and I realised the developer’s staggering technical achievement. The cities in this game are absolutely massive.

In buying a region and gaining access to port facilities my traffic problems really hotted up as cargo-laden trucks delivered goods to my previously resource-starved industry areas.

This one connection made it necessary to revaluate my entire road network. 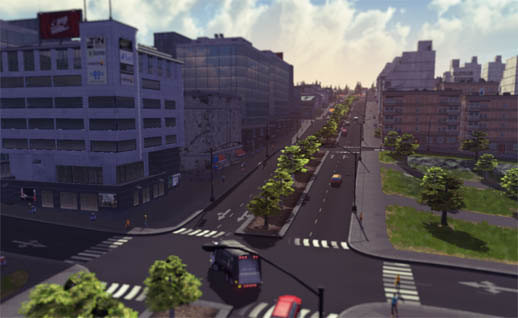 The scale of the game’s transport simulation is mind boggling.

Watching traffic patterns change dynamically, following buses and trucks you can see that the game really is modelling the daily lives of the people living in your city.

The game looks so good and runs so well that I can only assume that the developers have done some sort of deal with the devil. 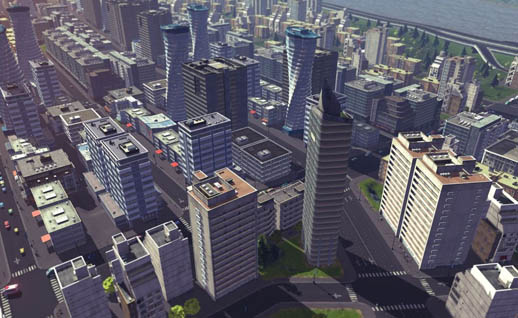 I tried my absolute best to cripple the Unity engine powering the game. I added thousands of swaying trees to a city probably ten times the size of SimCity’s and it never skipped a frame. Even cranking the speed up to x3 the game just ate it up.

The code optimisation is incredible.

To have so much going on from planes flying overhead to dogs playing in the park and not have to take a performance hit beggars belief. Extraordinary. 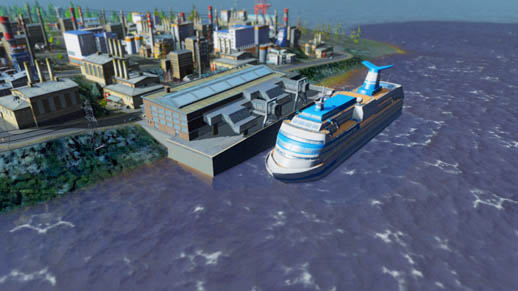 Playing the game was an absolutely captivating experience and one that I can’t recommend enough.

It’s amazing that a game like this, produced by a comparatively small studio, can best SimCity developers, Maxis, as their own game and in such a startling fashion.

They must be the absolute envy of everyone what worked on SimCity. As for Cities XL, well, it’s game over for them. 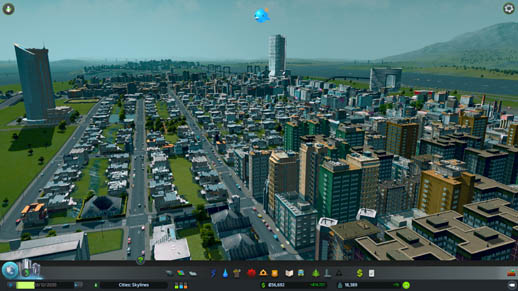 Cities: Skylines is gorgeous, hugely entertaining and a feat of technical marvel.

If you enjoy city-builders you are going to love it. This is the game that you have been waiting for. Once it gets its claws in you you’ll be playing it until the early hours.