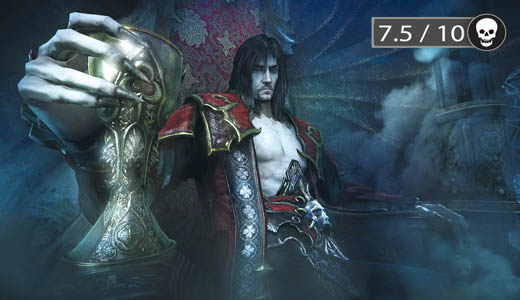 MercurySteam brings yet another addition to an old and already broad series with Castlevania: Lords of Shadow 2. While I’ve never played any of the others, this one still managed to grab me, even with my short attention span.

It’s an action adventure game that feels a lot like God of War with a bit of Devil May Cry thrown in. It’s an interesting mix, despite the feelings of déja vu.

The story is based around Dracula with MercurySteam giving us their take on the very ancient and extensively done story. This particular interpretation has family feuding, daddy issues, nasty demons, spiritual calamity and the impending return of Satan; with you playing as Dracula, trying to fix, beat up and stop it all.  This was enough to be entertaining. 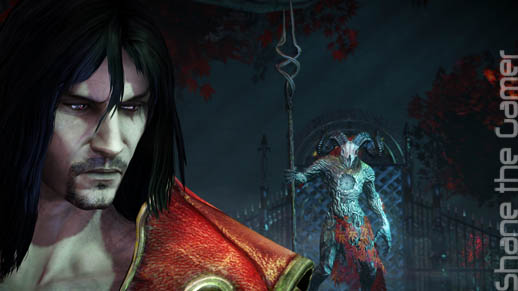 Dracula is a very serious and irate character. He gets slain by his son and grandson only to awaken centuries later and is now on a mission to stop Satan’s return. If he fails, he will likely be made into a plaything thing at the devils mercy- of which Satan has none. So he has plenty of reason to have woken up on the wrong side of the bed…or coffin.

Combat is of average standard. You unlock three basic weapons types, all of which have upgrade trees. Two have their own magic abilities. Using either the weapon or the ability depletes mana. 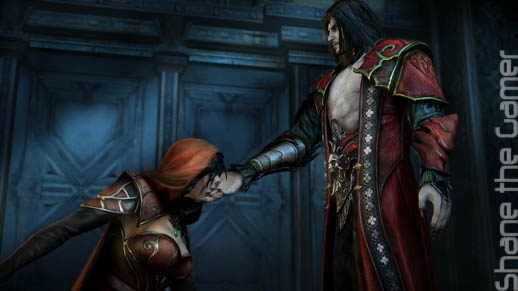 I limited my usage of these weapons as their magic abilities are needed to solve puzzles and access areas. With the occasional big boss fight they become a necessity, as finding yourself fresh out of mana simply wouldn’t do.

The battle system has a God of War feel to it.

While you can’t get away with button mashing as much, if you smack the enemy around enough you can begin a QTE involving a timely button hit. 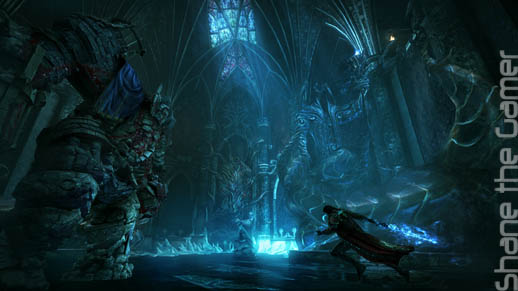 Succeeding this starts a scene where Dracula brutally kills and quite literally sucks the life out of the victim which increases your health.

You have to block or dodge often enough, this requiring your full attention and there are few mini bosses littered throughout the game that require a bit more foot work.

There are a few trinkets and items that can be picked up along the way to make battle a bit more exciting and fun and you can slow down time, get help to find hidden chests, get a short combat boost or even summon a dragon type attack to deal some serious fire damage all around you. 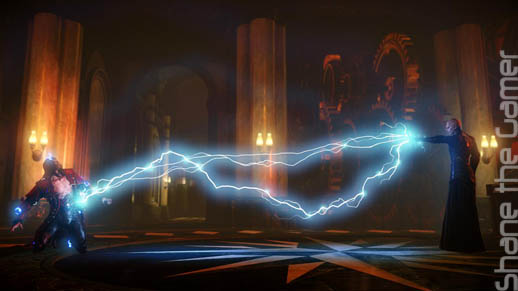 The artefacts you collect can be found in breakable objects strewn throughout the Levels. This had me smashing everything in sight. I guess I did only find this out by accident as I just love destroying things. So I was very happy to find something breakable that also offered reward.

There are a few stealth sections or areas where you need to use various abilities to sneak, distract and confuse the enemy. One ability sends a swarm of bats to hassle your foe briefly incapacitating them which allows for a bit of a run around. Some parts involve sneaking up behind enemies and possessing them, then using them to unlock doors and get past security. 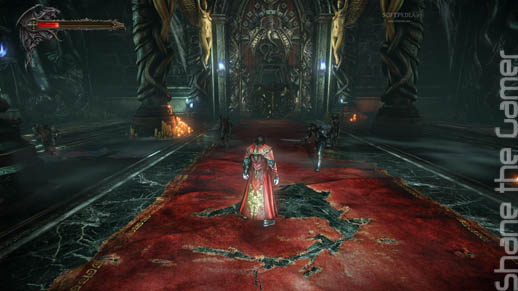 At special dark spots you can even turn into a rat to sneak around or get through tight spots to solve puzzles and elude the enemy.

While this is sounding a bit like Dishonoured, these sections don’t exactly dominate the game. I did find a vampire turning into a rat a bit odd but then again I never expected to see them sparkle either (not to say sparkling vampires is ok).

Despite this I found these sections well implemented and enjoyable. 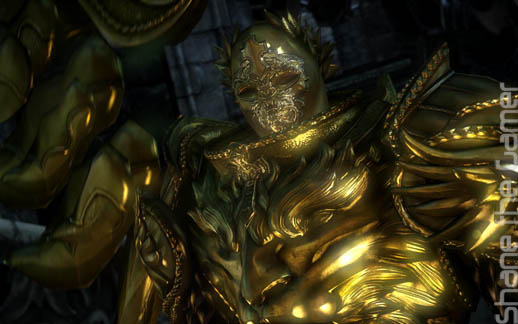 To increase health and mana for each magical weapon you need to collect 5 special crystals for each one.

They are found in floating cubes scattered throughout the levels, usually requiring puzzle solving, special abilities and exploration to locate and unlock. This is addictive enough to keep you searching every corner of the game.

I was happy to find the game points out the right direction, so I could intentionally go the wrong direction to find those hidden treasures. When I’ve played games of similar nature I go around ‘exploring’ only to find out I wasn’t exactly venturing off the beaten track at all. 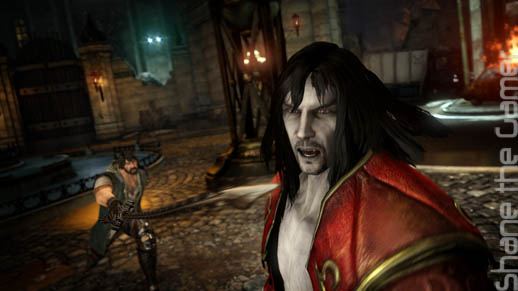 However if this is you, this game, apart from showing the right path, gives you the opportunity to revisit, fully explore and unlock things you might not have had access to prior.

The game is set in the modern day within a rather debauched city.

This is made obvious after a lengthy intro explaining how this all came about and how you fit in. You do however have bizarre moments where you jump back into your castle the way it was a couple centuries back. You’re never sure if this is one big hallucination, a dream or just an alternate world. As you progress you gain the ability, at special portals, to jump back ‘n’ forth between the two. This allows for more variety to your environment and helps keep things interesting though slightly disorientating. 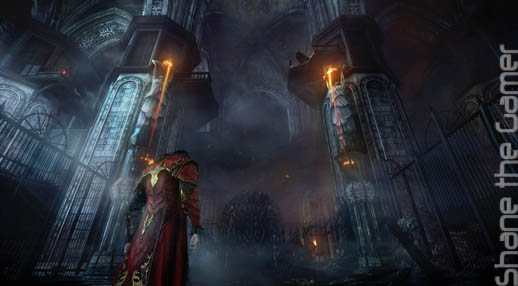 Initially I found the game managed to spoon feed me to the point of annoyance.

After turning off hints, (as having it on is the default setting), there are definitely occasions where a small hint might avoid a lot of frustration. To be fair, once I had figured out what I was supposed to be doing next, I was quite proud. All in all they didn’t really manage to balance this very well at all. Hints are supposed to be a help not a hindrance.

The environments themselves are dark and gloomy, as one might expect with a vampire game. The architecture of some buildings are quite pleasing to the eye. I did sit and admire its gothic beauty. Textures on the other hand aren’t exactly great. 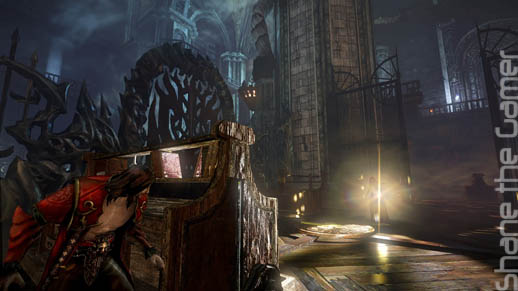 In some sections if you told me this was a PS2 game, I might just have believed you. Collectively the visuals are manageable and don’t distract to the point of taking away from the game.

The game may seem to ‘have it all’, it just doesn’t venture out and break new ground within the action adventure genre.

The bad boy being the hero…or, well…lead roll rather, has been done. The same feeling is there for many other aspects of gameplay. In saying so, there are many hours of entertainment to be had. I don’t think I could pass up the opportunity to play as Dracula, Prince of Darkness. 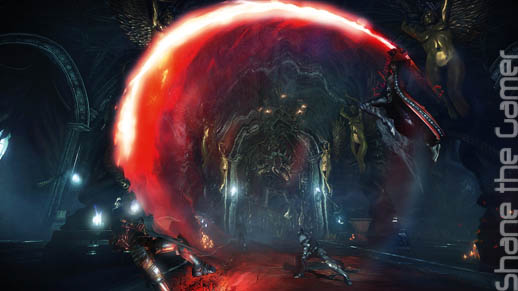 Any fan of the genre should be able to pick up this game enjoy it. With a moody vampire guy, dark and dreary atmosphere, God of War gameplay and cause to bleed on everything thing, Castlevania: Lords of Shadow 2 has enough diversity and enjoyable gameplay elements to keep you playing.