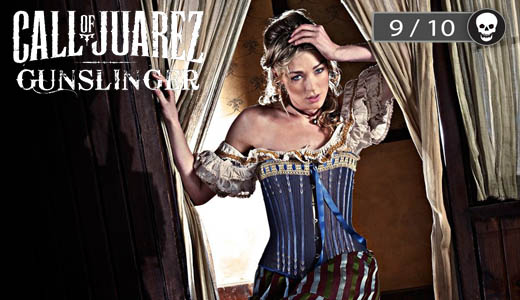 1910. Abilene, Kansas. A cart narrowly misses a lone man on horseback. What was once the Wild West has now been tamed. After tying up his horse, aged former gunslinger and bounty hunter, Silas Greaves pushes open the doors of Bulls Head saloon.

As he enters Silas is immediately recognized by a young man, Dwight, who is familiar with the gunslinger’s exploits as published in pages of one of the notoriously exaggerated pulp novels. Sitting himself down with the bar’s patrons Silas recalls his past adventures to a fascinated, if somewhat skeptical, audience.

Call of Juarez: Gunslinger is the fourth game in the series of Western first-person shooters. The previous Call of Juarez games have all enjoyed a reasonable amount of success. However, the last game, Call of Juarez: The Cartel, was met with mixed reviews mainly due to the setting being switched from the Old West to the modern day. 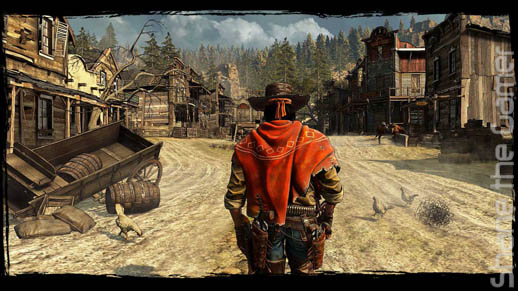 Unlike the previous entries, Gunslinger is a download only game, available on Xbox Live, PlayStation Network and via Steam for the PC. Compared to the other games in the series, we get a slightly shorter game with no multiplayer, but at a very pocket-friendly $20 price tag.

The game is played via flashbacks as Silas Greaves recounts his story, taking us back to the last days of the Old West. What follows is a tale that may or may not be true, of the old bounty hunter’s run-ins with some of the Wild West’s most famous and infamous citizens. During the game Silas rubs shoulders with the likes of Billy The Kid, Pat Garret and the Dalton Brothers. 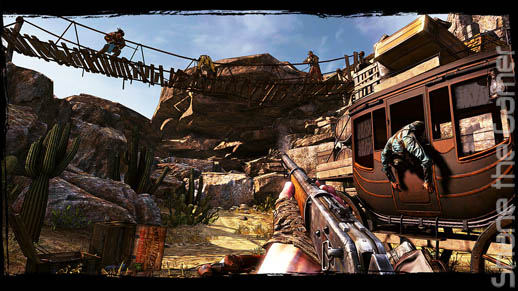 In keeping with the pulp style of an adventure dime novel, the game’s visual have a distinctive, illustrated look about them. At the start of each level, as Silas’s narration sets the scene, the game environment pops into frame, as if each element is being drawn in as it is described. Throughout the game the over-the-top story is present in this marvelous and refreshingly unique, almost comic-book, style.

The game doesn’t just excel in the visual department either; with every step you can hear the creak of Silas’s leather boots. Also, the realistic crack of a well-aimed gunshot is followed by the gross, but somewhat satisfying, sound of the blood popping from the bullet entry-point.  Gunslinger is, without a doubt, the most polished game of the series. 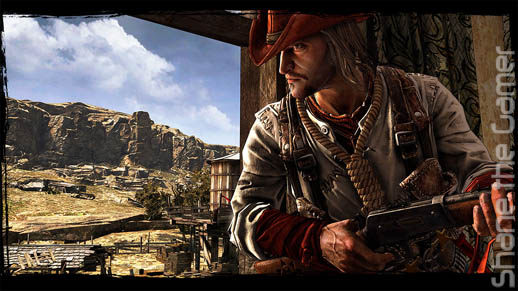 The game starts with Silas in the company of one Billy The Kid, on an exploit that sees him caught and captured along with the famous outlaw. During his escape, aided by Billy The Kid, Silus realizes that he has been set up, The Kid using him as a distraction for his own escape.

As the game progresses, you get the distinct impression that you what you are playing is actually no more than a tall tale told by an old man after free drinks in a saloon. It is an amusing way of imparting the story and rather explains the improbable antics associated with games of this sort. 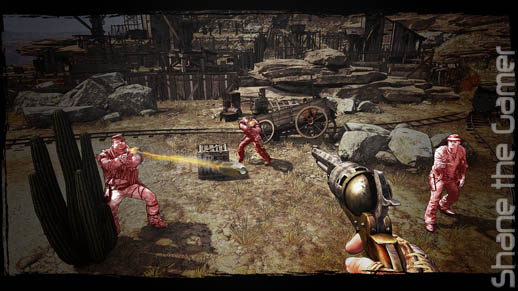 Silas narrates throughout the game, providing an amusing insight into a character that seems to be not quite as competent as he would have you believe. Silas often backtracks, retelling his story; with you playing out these alternative scenarios. Some of these‘what if’s’ are simply Silas musing on what could’ve happened, other seem just mistakes due to the old man’s ailing memory and the rest are just downright lies. The result is an exciting, action-packed and quite possibly embellished tale as the bounty hunter, Silas Greaves,shoots his way through the legendary Wild West.

Players familiar with the Call of Juarez series, especially the first game, will feel right at home with Gunslinger. Silas, being a hero (or not) of the Old West can, when the concentration bar is full, use this ability to slow time and highlight opponent allowing him to quickly take down multiple targets. Another useful ability is Silas’s “Sense of Death”, which automatically kicks in when targeted with a potential fatal shot and allows you to dodge the bullet with Silas’s name on it. 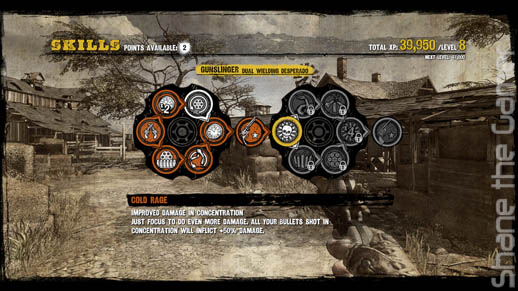 Silas has three weapon slots which can be equipped with a pistol, a rifle, two-dual-wield pistols (when unlocked) and some sticks of dynamite. Ammo and replacement weapons can be picked up in the field, either from fallen enemies or ammo crates.

The game’s levels all follow a similar episodic format, with Silas recounting how he pursued and confronted his bounty. I found the environments to be slightly less linear, especially in the town areas, than in the previous games; so much so that I needed to use the handy waypoint button a few times. It’s worth noting just how detailed the levels are; they are chock-full of destructible lamps, explosive kegs, bottles and pumpkins. At the end of each section the boss is revealed which usually results in a showdown. 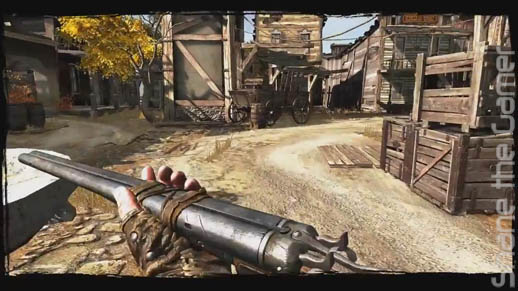 Gunslinger’s duels are tense, heart in mouth stuff as you face off with your opponent in a classic Western showdown. You carefully adjust the position of your hand over your pistol with the left sick (or mouse) to increase you draw speed whilst ensuring that the targeting reticule stays over the target with the right stick (or keyboard). The moment your opponent goes for his gun you must draw and shoot to take him down before he fires. Too slow and you’ll dodging and firing in a furious exchange of bullets until one of you goes down. Of course this being the Wild West, you don’t have to play fair and can instead just fire first resulting in a bonus forfeiting dishonourable victory. 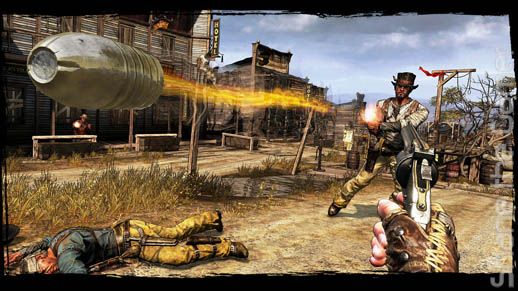 As you’d expect with any shooter worth its salt, Gunslinger features an upgradable skill tree. Kills equal XP and XP levels Silas up. For every level gained one skill point is awarded.  Skill points can be spend on abilities from three different, and very self-explanatory, classes: “Duel Wielding Desperado”, “Ranger Long Distance Sharpshooter”and “Trapper Close Combat”.   It is a system that is very similar to developer Techland’s other franchise, Dead Island, and allows players to customize Silas’s abilities to suit their own play style.

Scattered throughout the game are a large number of secrets to find. These collectables, which unlock “Nuggets of Truth”, reveal the true stories of the people, places and events that Silas comes across during the course of the game. 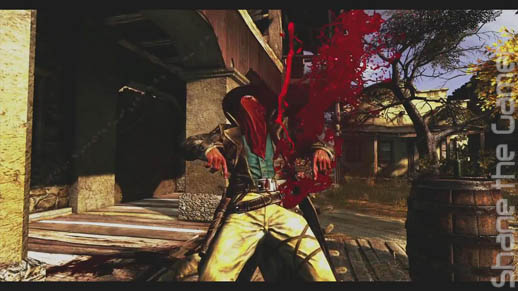 The story campaign is great fun and it’s a shame that you can’t continue the game online with friends. But, whilst the absence of a multiplayer mode is disappointing, Gunslinger does have couple of extra tricks up its sleeve with the Arcade mode and a Duel mode; adding extra value to what is already a great package.

The Arcade mode continues the same gameplay style as the story campaign, but this time the emphasis is more on scoring points, chaining combos and obtaining speed bonuses. The game ships with ten levels full of miscreants and ne’er-do-wells that require clearing out. Instead of playing as Silas, you choose from three classes. You can pick from the duel pistol wielding gunslinger, the rifle and dynamite equipped trapper or the ranger with his long-range rifle. 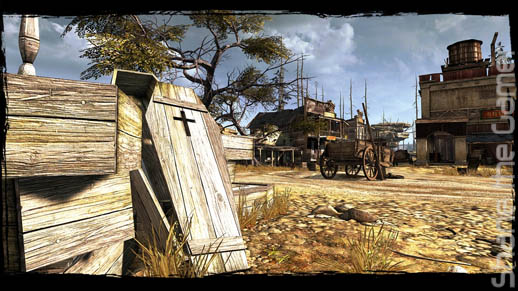 The game also features the Duel challenge mode, which is basically a series of showdowns pitting Silas up against some of the nefarious individuals that he meets in the story campaign. You get five lives and the aim is to take out as many opponents as you can.

Call of Juarez: Gunslinger is more than just a return to form for the series, it’s an extremely well rounded instalment and, with its budget price, incredible value for money.  I’ve found all the previous Call of Juarez games nice to look at and fun to play, even The Cartel wasn’t that bad, but they’ve always fallen just short of superb. With Gunslinger the series has finally matured and found itself, giving us a stylish and fun entry that is the most polished yet. 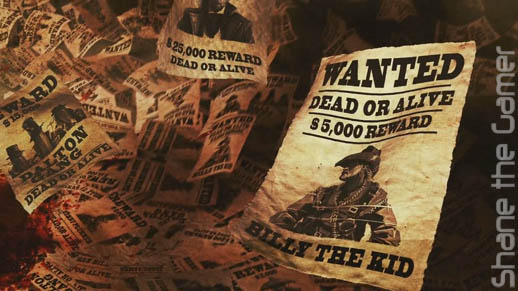 If you’ve never played a Call of Juarez game, or if you’ve been put off by recent efforts, I’d recommend you pick up Call of Juarez: Gunslinger. And for only 1200 Microsoft Points Xbox Live, $21.95 on the PlayStation Network or $19.95 on PC, you can’t go wrong.