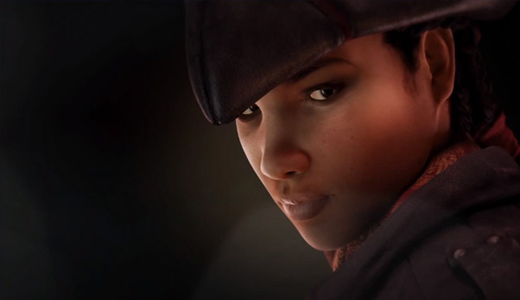 A couple of years ago I took a day trip from Auckland to Sydney, courtesy of Ubisoft, to check out Assassin’s Creed II with the game’s creative director, Patrice Désilets.

As great as it was, I wouldn’t recommend a trans-Tasman day trip to anyone.

My recent move to the lucky country meant that attending the press-only hands-on for Assassin’s Creed III was a lot less hassle, with only a train trip between the house and the venue on Sydney’s beautiful waterfront.

Tearing myself away from the fantastic view of the Harbour Bridge and Opera House (I still feel like a tourist in this fair city), I listened as Assassin’s Creed 3 associate producer, Julien Laferrière, and mission director, Philippe Bergeron introduced their game. 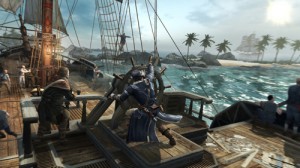 For Assassin’s Creed III the story shifts from the Middle Ages and the Renaissance period to The New World,colonial America, at the time of the revolutionary war with the British. With the new location comes a new leading man, the conflicted half-Mohawk, half-English Conner Kenway.

The session kicked-off with both Julian and Philippe introducing the new lead character and location whilst playing a segment of the game showcasing the Frontier setting. With Philippe at the controls Conner jumped from tree-to-tree until he reached Davonport Manor, his base of operation at this point in the game. Julien explained the existence of a curious character called Peg Leg sitting outside the house. Peg Leg will sate the desired of the collecting fans out there with missions that’ll have player hunting around for all sort of stuff. 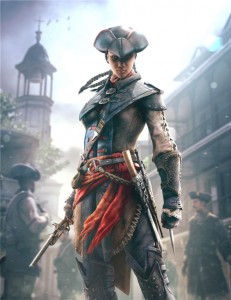 of Independence as a backdrop for Assassin’s Creed III, is probably the safest commercial move that Ubisoft have made since the series’ inception. Their core American audience will witness the birth of their nation, whilst British player will get to see their country-men take a good beating. This time period also brings the series within an area of history that many players will be familiar with, with many famous historical figures rubbing shoulders with Conner throughout the game.

After the intro we were lead over to the waiting PS3s for a bit of a hands-on with the game itself. Sequence 6 of the game was unlocked and ready for me to play. This was the same point in Conner’s story that Phillippe showed off earlier.  Davonport Manor, Conner’s home, is on the edge of the Frontier, with Boston to the north and a tall ship moored at the bottom of the garden.

The first thing I did was to take Conner’s ship out for a spin. I was pretty interested in just how the sea battle missions fit into the whole Assassin’s Creed gameplay aesthetic. I’ve never been a fan of the Assassin’s Creed mini-games, but I did enjoy the ship-to-ship battles in Empire Total War. 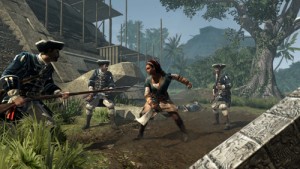 Walking up to the tall ship parked at the bottom of his yard and speaking to the harbour master gained access to a map from which a sea mission I could select a sea mission. I could choose from a story mission, one of the more generic Privateer missions or fast travel to Boston.

I chose a Privateer mission, in which Conner’s must escort a merchant ship taking care of any British ships that get in the way. The third-person view from the deck of the ship had Conner at the helm physically tugging on the wheel as I moved the thumbstick.  The controls were easy to grasp, with the ships speed controlled by raising full sails, half-sails or stopping. Turn into, or out of the wind also affected the ships speed.

The ship was equipped with a battery of cannons on each side and a turret gun, which could directly target ships. Whilst the turret gun could easily find its target, aligning the ship’s cannons was a lot more involved. Thankfully, realism and historical accuracy took a bit of a backseat.  Conner’s virtually indestructible ship was able to turn on a penny whilst the British ships, being seemingly made out of balsa wood, were prone to exploding just a little too easily. Despite all this I found that sea battle very entertaining and I’m sure they will provide a bit of light gaming fun away from the usual heady Assassin’s Creed story missions. 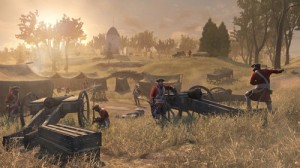 British fleet and seeing the merchant ship on his way it was time to try out Conner’s climbing abilities in the wilderness of the Frontier. The first thing that it reminded me of was the wilderness in Red Dead Redemption, but only for a moment. I’d only recently been playing Assasin’s Creed Revelations, so I almost instinctively climbed a tree and found myself running along the branches. All I can say is that the tree climbing a leaping is a smooth as it looks in the videos.

From the Frontier, I moved on to Boston. Whilst the setting is beautifully recreated, with loads of NPCs and animals roaming the streets, it looks a little too familiar. The Colonial American town didn’t feel as exotic medieval Jerusalem, Renaissance Rome or Constantinople in the previous Assassin’s Creed games. 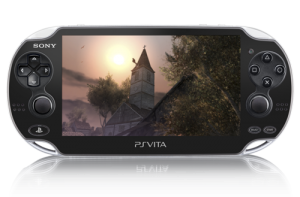 Boston gave me the perfect opportunity to cause a little mayhem. For the hands-on, Conner had a tomahawk with a dagger in his left hand as his main weapons. It was pretty efficient as weapon combo, and proved handy when my feisty actions got the pretty much the entire garrison of Redcoats after me. The Redcoat didn’t mess about, and I soon found myself standing in a ring of muskets getting shot to bits. I was powerless to do anything until they reloaded. But, when they did pause to reload and I got the kill chain going, Conner’s combat moves proving to be fluid and very enjoyable. So enjoyable that I went right up to another Recoat and did it all again.

Ubisoft also had a few PlayStation Vitas running Assassin’s Creed III: Liberation. For the first time the portable instalment of the Assassin’s Creed allows players will get to control a female assassin. The action is set in 18th Century New Orleans, with players controlling Aveline de Grandpré. The story is completely separate to Desmond’s adventures in the main Assassin’s Creed series and part of a range of products produced my the series mysterious Abstergo Entertainment, part of Abstergo Industries. A game within a game, as it were. 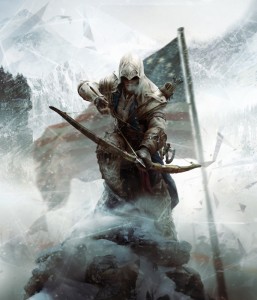 The graphics on the Vita are a miniaturised version on par with those that  you’d expect from the PS3 version. I checked out the training level , in which I was sent out to search for glyphs in the swamp. I found Aveline’s climbing skills to be very similar to Conner’s in ACIII as she leaped from tree to tree. The Vita version then took me through long range assassination using a blowpipe. From what I saw of it, Assassin’s Creed III: Liberation looked and felt great; providing gamers with yet another reason to buy Sony’s little games console.

Assassin’s Creed III was a joy to play. I know I only got to play a very small part of what the game has to offer, but every time I see this game I can’t help but marvel at what they have achieved. The Assassin’s Creed series is a gaming masterpiece and ACII will be a strong addition to the franchise. I for one am really looking forward to getting my hands on the game when it comes out at the end of the month.