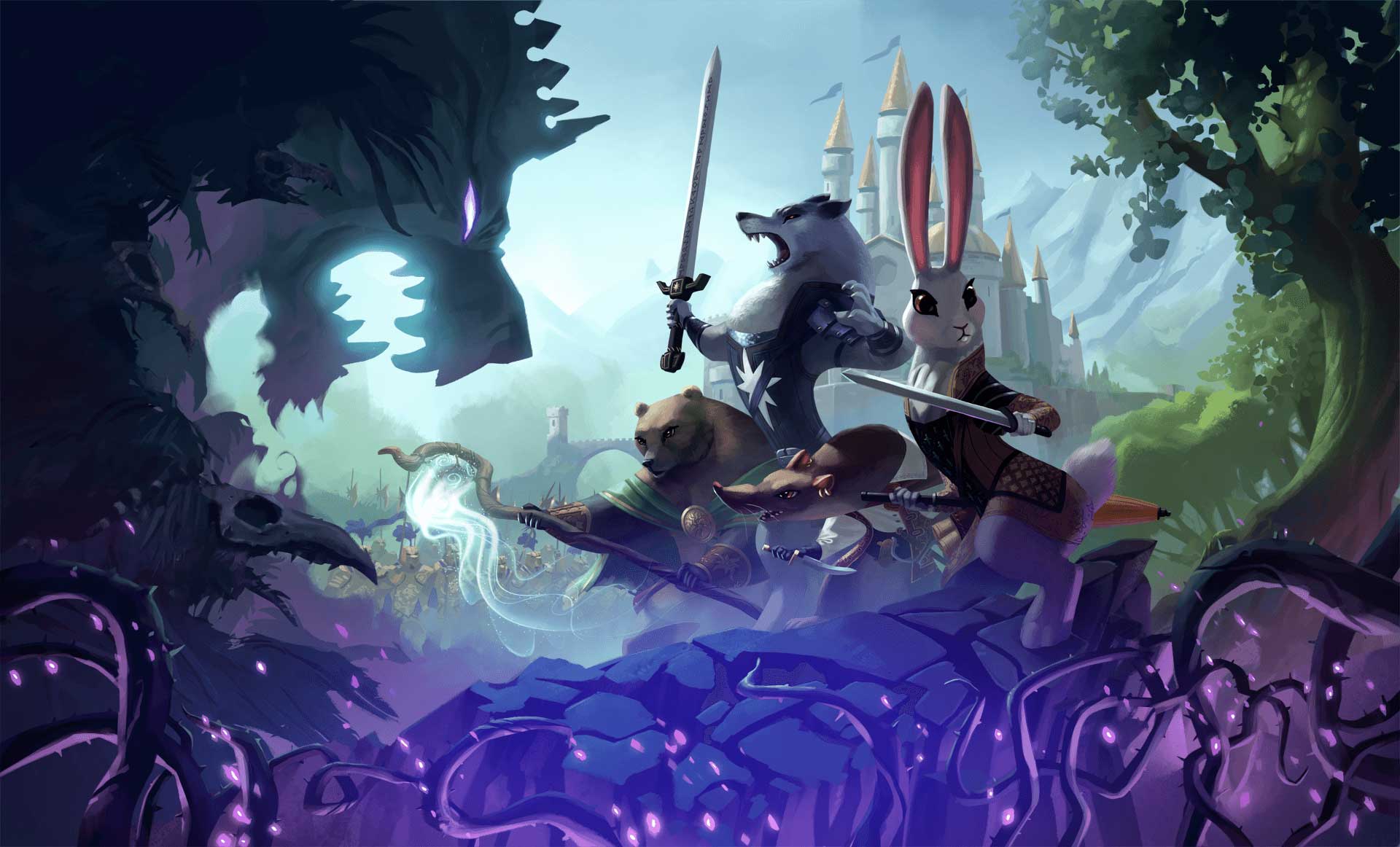 Australian developer League of Geeks have blurred the lines between board game and video game with their debut title Armello. The unique blend of video game, board game and card game aspects provides for a distinct yet and entertaining experience.

The fantasy kingdom of Armello is in chaos with the king slowly being corrupted and dying by a dark force known as the Rot. With a royal title up for grabs, four ambitious heroes set out to claim this title for themselves.

The world of Armello has a fairy tale fantasy tone manifested in everything from the gorgeous visual style to the characters which are essentially animals with a bit of a twist. 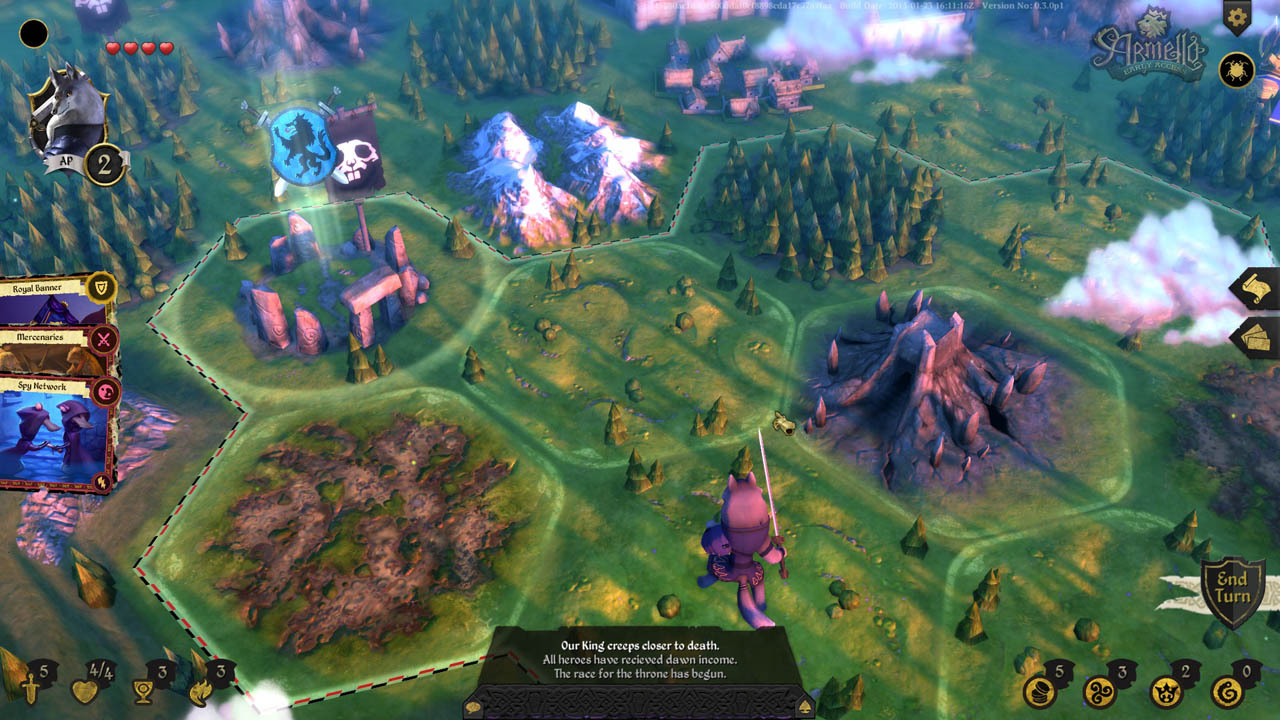 Games play out very much like a board game and generally take about an hour to complete. Players initially choose one of eight characters to use. Each character possess a unique ability, look and stats. Unfortunately though not all characters are equal with some possessing more desirable stats than others.

From here you are thrown into one corner of the board and take turns with other players to complete the game. The board is filled with randomly generated terrain ranging from mountains to settlements. While this does create some variability between each game, visually the games look the same. 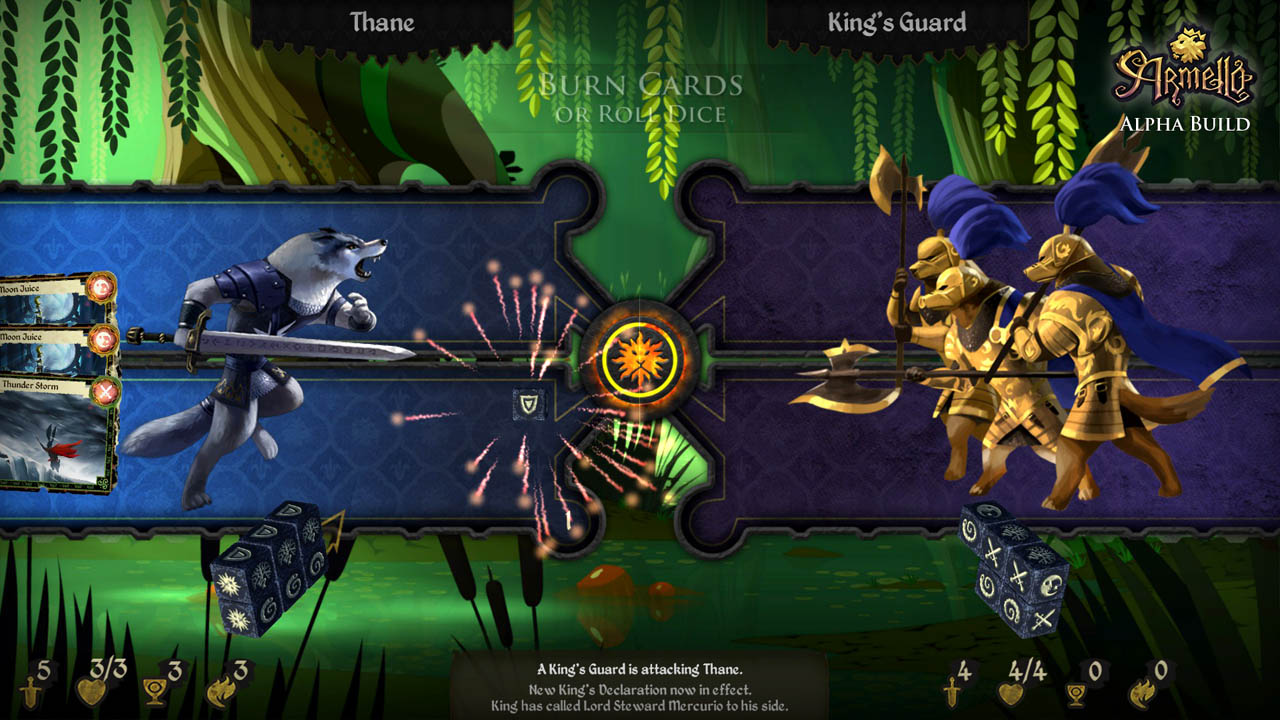 There are two basic ways to win in the game: have the highest prestige when the king naturally dies by the Rot or kill the king yourself. The most fun part of each match happens towards the end of the game as players all scramble into the centre to try and get that final blow on the king. If you are the prestige leader though, you can choose to try and defend the king from the other players, something which proves stressful given how chaotic things get.

While the overall goal is to kill the king, you will spend the majority of the game training yourself up for the task. This is done via way of completing quests which reward you with rare items, prestige and increased stats. To complete a quest you simply have to get to a particular location on the map. To get there however you will have to overcome any players or evil NPCs you come across.

While the quests themselves aren’t interesting, completing them does feel rewarding, especially when it leads to you finally lifting that much sort after crown. 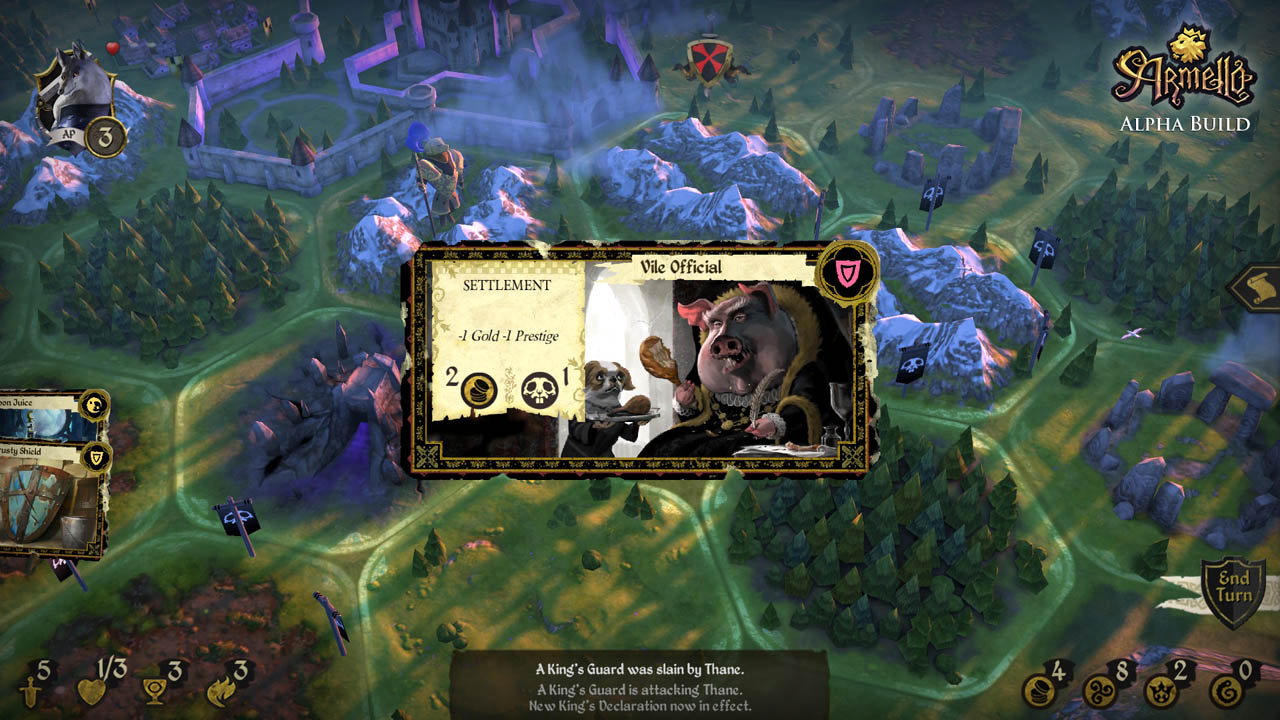 One of the best parts of the gameplay is the cool card based system it utilises.

Cards you pick up generally involve equipment you can equip, spells you can cast or traps you can set. The cards add a more strategic element to the game and generally makes things more unpredictable and fun. For every card you use, you are able to pick up another card the next turn. This encourages players to try and use as many cards as they can. Getting stuck with cards you cannot use though does prove frustrating at times.

Between turns the game can get a bit boring. For every second you are doing something, there is about four that you are not, as you wait for your three opponents and NPCs to complete their turn. I frequently found myself utilising this time doing other things such as browsing the internet or even writing this review. 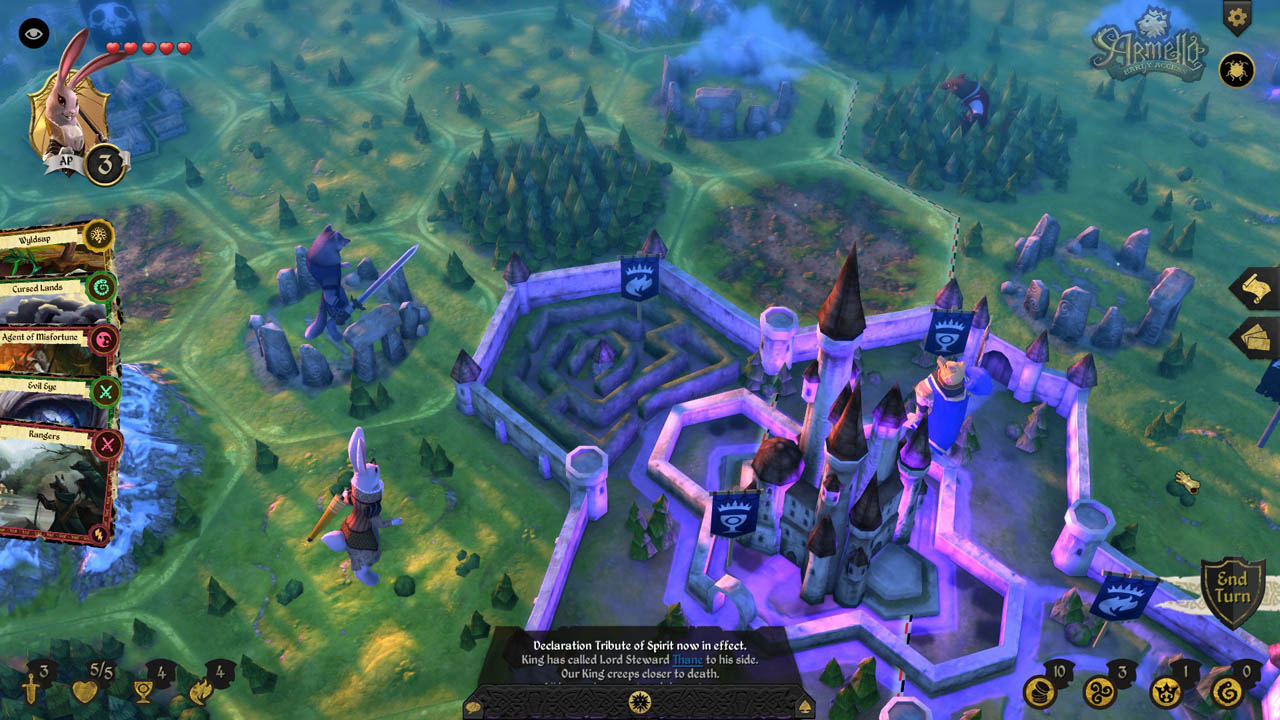 Battles take place using a creative dice system which is based part on luck and part on characters stats and items. The first makes the battles exciting and unpredictable and the latter ensures that strategy and training is still critical.

The six sided dice contains different symbols on each side which correlate to either a hit, a block or a miss. No matter how much stronger one player is than the other, there is no way to be sure who will win and how much damage would be taken making each battle thrilling, especially when you are the one taking part in it.

Armello’s major shortfall is that it lacks variety, something inherent to most board games. While what happens in each game can vary, the game itself stays the same. After a few games, it does start to get a bit repetitive. Something to change the game the game up a bit in both visual style and objectives feels very much needed. 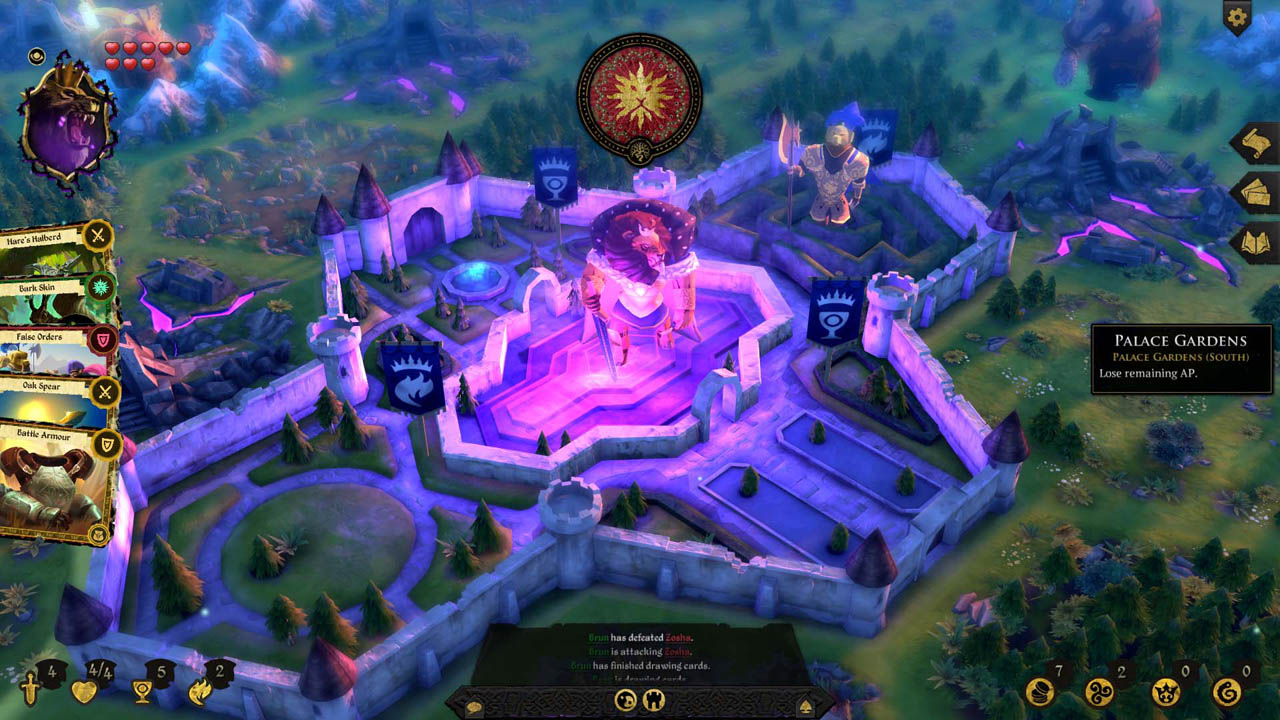 Armello can either be played either online with other people or offline with NPCs. Each of these has their own shortcomings. Playing offline, the AI is generally a bit too easy and also there isn’t as much satisfaction when you finally get that victory. When playing online however, it can take quite a long time to find a game, any connection issue will see you evicted from the match and people tend to rage quit when they begin to lose too badly.

A couple of online games I played did bug out. One of which had been going on for about an hour with the final outcome to be decided that turn before an NPC got stuck and never took its turn. Needless to say much frustration was gained at having wasted all that time only for a bug to prevent me from a possible victory.

Armello does succeed in creating a unique experience for those wanting something a bit different. While many parts of the gameplay is great, the game does lack variability in some key areas making matches feel somewhat repetitive.