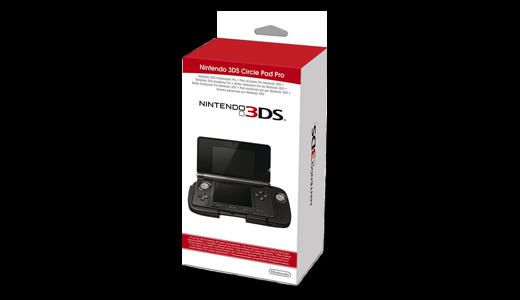 Undeniably, Nintendo’s 3D DS handheld console was the champion of all portable gaming devices in 2011. 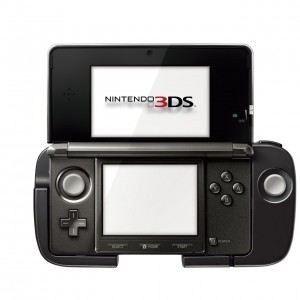 Uh hell, they’ve always been the Masters of portable gaming from waaaaay back in the ‘80s with the Game and Watch devices (which interestingly enough were the same clamshell design as the DS/3DS).

3D without glasses and as with all Nintendo consoles, backwards compatible.

So how do you improve the seemingly un-improvable?

Simple – add another game control mechanic.The Circle Pad Pro hosts your console by clipping into the bottom of the device and equips another analogue stick to the right.

Sure this gives your Right Thumb a purpose in life, but it also makes FPS titles (like the upcoming Resident Evil: Revelations) a damn site more playable.

The added shoulder buttons (L and R) on the Circle Pad Pro give that extra ability for rapid fire and quick reflexes when needed.

Whilst boasting traditional console style controls it also adds in other dimensions whereby you can enact combos and cause affects that you might not have been able to do otherwise… as an example, fighting titles.

The clip on Circle Pad does require battery power to work (1x AAA). 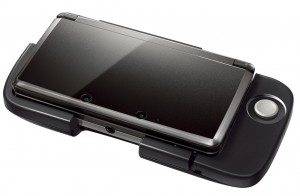 It makes sense for it to not feed off the 3DS’ power as it would probably lessen the lifetime of continuous play overall, but it would’ve been better if the add on was also rechargeable.

This would of course save you from having to carry a spare battery with you when on the go. That said, the replaceable AAA Battery will give you around 480 hours of non-stop 3DS-ing.

My brief hands-on with the CPP (Circle Pad Pro) was a pleasing experience. At first look it appears that the unit is going to be large and slightly clunky in your hands, but it is quite the opposite!

It feels natural and even more comfy than your average gaming controller.

Almost being giveaway at the price tag of $35.00, if you have a 3DS, seriously, you’ll need this.