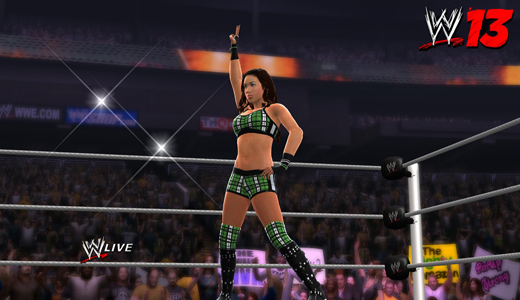 I’m going to open this review with a bold, but 100% accurate statement: no-one alive cares or knows more about the WWE video gaming franchise as I do.

This isn’t a boast, I’m not overwhelmingly proud of that fact, but that’s just the way it is. So when I tell you that WWE’13 is easily, easily, the best wrestling game ever made, that’s the bottom line, because the expert said so.

Myself and a small, dedicated group of my friends have been playing the WWE video games for the last five iterations of the franchise. 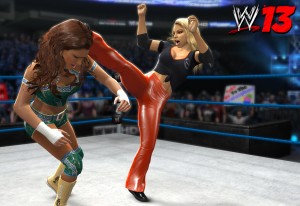 the stage where not only does it take quite a lot to impress us, but we’re also almost certainly going to notice even the most minor and meaningless flaws your average gamer probably wouldn’t.

Because we tend to put way too much importance on the matches we have in game, a long-running joke has been that eventually the WWE will release a game that will fix all the various niggling problems we’ve had with the series. And I really hate to jinx it, having only put about thirty hours into a game I’m likely to spend hundreds on, but I think WWE’13 might be the game we’ve been waiting for. Let’s break it down.

If you’ve ever played a WWE game of any kind, you’ll probably be fairly familiar with how the game works.

You take control of a collection of WWE superstars, past and present, and compete in matches against the computer, your friend, or randoms online. The entire aim of the game is to make it feel as much like a WWE TV show as possible, so you have access to a wide range of moves, counters, leaps, weapons and everything else that makes the WWE so damn watchable. 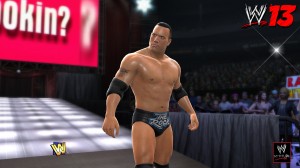 The control scheme hasn’t changed much since last year – each of the face buttons control a different basic move (strike, Irish whip, finisher, grab) while the right analogue stick allows you to vary up your type of grapple on the fly.

Pull off these moves successfully, build up your characters momentum and execute a  devastating finishing move. The control scheme is still really tight and fairly easy to pick up, and is the first example of what seems to be the WWE’13 mindset – if it ain’t broke, don’t fix it, just make it even better.

This year’s focus is on the Attitude Era, undoubtedly the best time in professional wrestling history, featuring all the greats and some of the best story lines the WWE/WWF has ever had. Not only does this mean that you get to relive all these fantastic iconic moments (including, but not limited to, the Montreal Screwjob and Mankind getting thrown off the cell), but it means that WWE’13 effectively covers about fifteen years of history – and manages to to do it well.

Not only does it 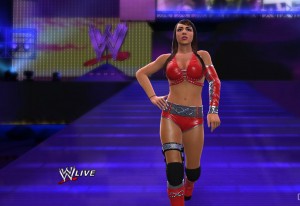 contain the biggest roster of any WWE game I’ve ever seen, but it also features about every professional wrestling title that’s ever existed and all other manner of ridiculously specific unlockable content that proves this game was put together by a team of very knowledgeable wrestling fans.

If the best of the WWE on to offer isn’t quite good enough for you, WWE’13 also contains the tightest, slickest and largest Creation Suite the game has ever seen.

Create-A-Superstar makes a triumphant return, bringing in some great new ways to alter your own unique, homemade grappler (although this game loses points for, yet again, not allowing me to give my own wrestler Edge’s pay-per-view entrance jacket). On top of that, we’ve got all of last year’s staples – create an arena, a move set, a finisher, your own story lines to play – all refined to near-perfection. 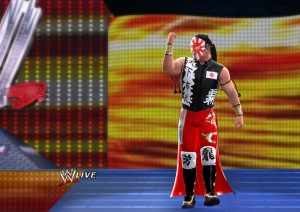 Although WWE’13 perhaps hasn’t bought as much brand new mechanics to the table as in previous years, what they have added in is amazing, none more so than the fantastic, but poorly named, OMG! moments.

OMG! moments are designed to reflect the rare, pay-per-view class moments of the WWE, that make your jaw drop with their superb awesomeness.

When your character has a finisher icon stored, you can let any one of these amazing moments unfold – be it power bombing someone through the announce table, reversing a diving move with a sweet mid-air finisher or tackling them through the barricade. This is the kind of stuff wrestling fans live for, and having this much attention paid to it in the game is a great decision.

The design team has gone through great pains to make sure that the visual experience is as close to watching a TV match as possible  – no heads-up displays, camera cuts and replays mid-match, an announce team calling every move you make. 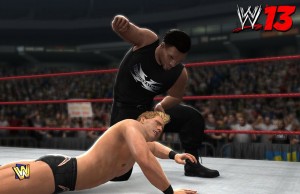 and arenas look damn good too –  noticeable step-up from last year – and in-ring movements and actions are considerably more fluid and realistic than they’ve ever been. On top of that, a bunch of new moves have been added, and some of the more dated-looking ones have been updated, making this the most complete wrestling package yet.

The only issue I encountered while playing this otherwise damn-near perfect wrestling game was with the audio, especially in one specific instance.

One of the key focuses for the game this year was to try and recreate the vocal excitement from the live, stadium crowds the WWE is shot in front of.

For the most part this is excellent, the crowd responds with boos and cheers accordingly and gets riled up when someone is about to do a finisher. 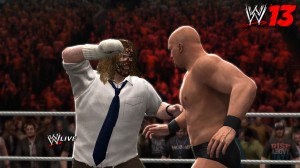 However, I noticed that at some points during the attitude era storyline cinematics the volume ratios were a little bit skewed, and the cheers of the crowd completely overwhelmed the characters in the ring and the announce team calling the action, to the point where they actually couldn’t be heard. I imagine this will be an easy enough problem to patch, so shouldn’t be an issue for long.

The reality of professional wrestling video games is this: it’s not for everyone.

However, for the audience it’s intended for – dedicated WWE fans – this game is pretty close to everything you could ever want.

So if you are a wrestling fan, get out there now and buy this game. It’s awesome.

If you’re not, this is a really great way to get into it.

Give it a shot, and your world will never, evvvvvvvvvvvvveer be the same again.

Two words for ya: Buy it.