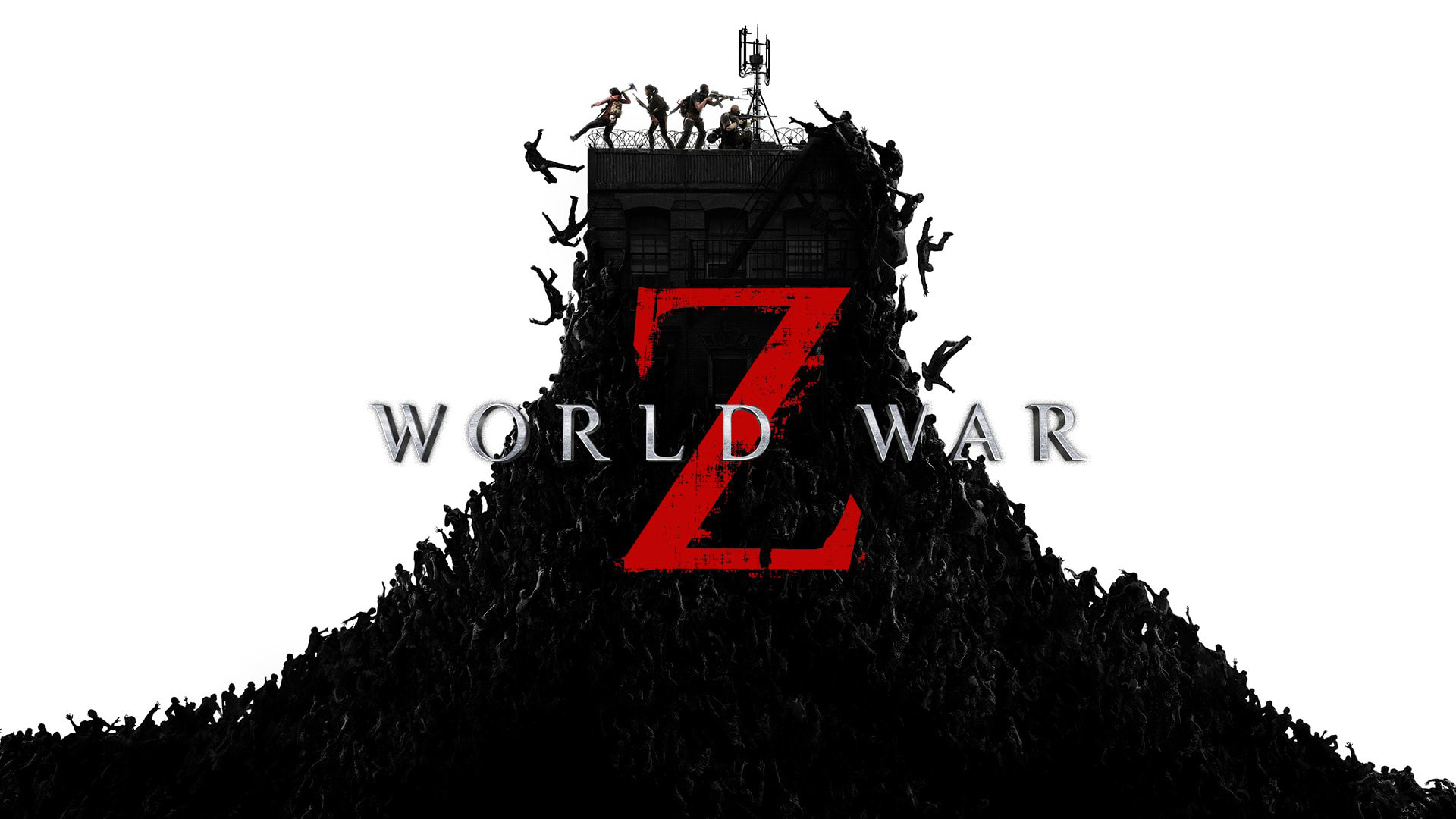 World War Z is a good movie, despite the clear differences from the book.

The 2013 Brad Pitt starring zombie movie is even better than you remember it. With a sequel still a while of, releasing a tie-in game based on the movie is a bit surprising.

I’ve not been following the development of Sabre Interactive’s licensed World War Z game and, to be honest, I wasn’t holding out much hope for it. Despite the film’s success back in the day, World War Z isn’t a triple-A licence. 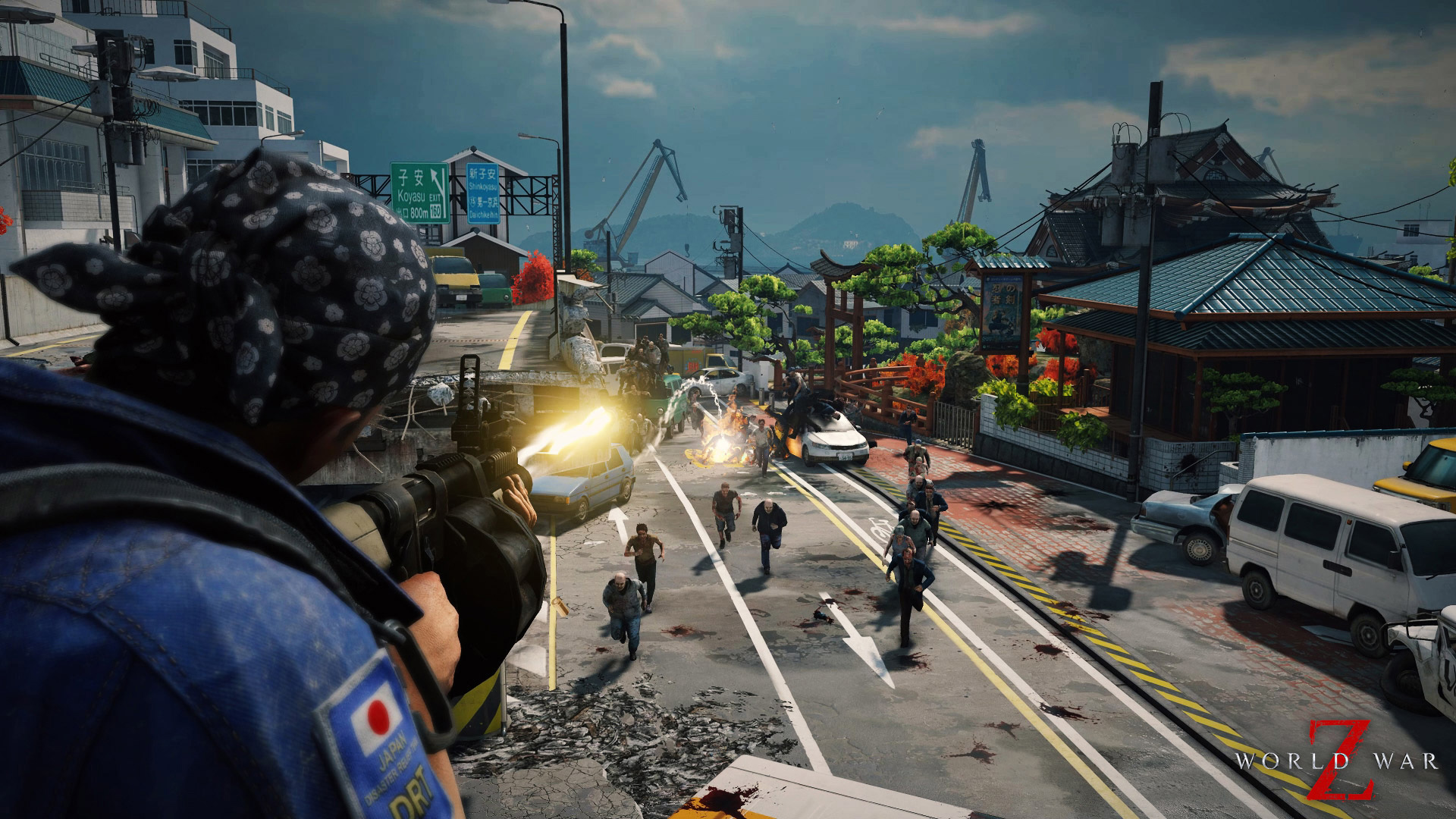 Only the other day I was lamenting on the simplicity of the Left 4 Dead games. On how easy it was to drop in and drop out of a game, how each chapter was a blast to play and just how much fun it was. It’s not hard to view World War Z as the spiritual successor to Gearbox’s co-op zombie shooters.

The co-op campaign is based around four episodes set in New York, Jerusalem, Moscow and Tokyo. With the exception of Tokyo’s two, each Episode has three chapters. Whilst the do follow a rudimentary storyline, like the Left 4 Dead games before it, they are designed to be, and can be, played in any order as complete levels.

The campaign is best played online, with players dropping in and out of your game as they wish, replacing the AI versions of your three companions. If you are just after a quick go and don’t want to offend someone by prematurely dropping out you can play off-line, relying entirely on your AI team members. 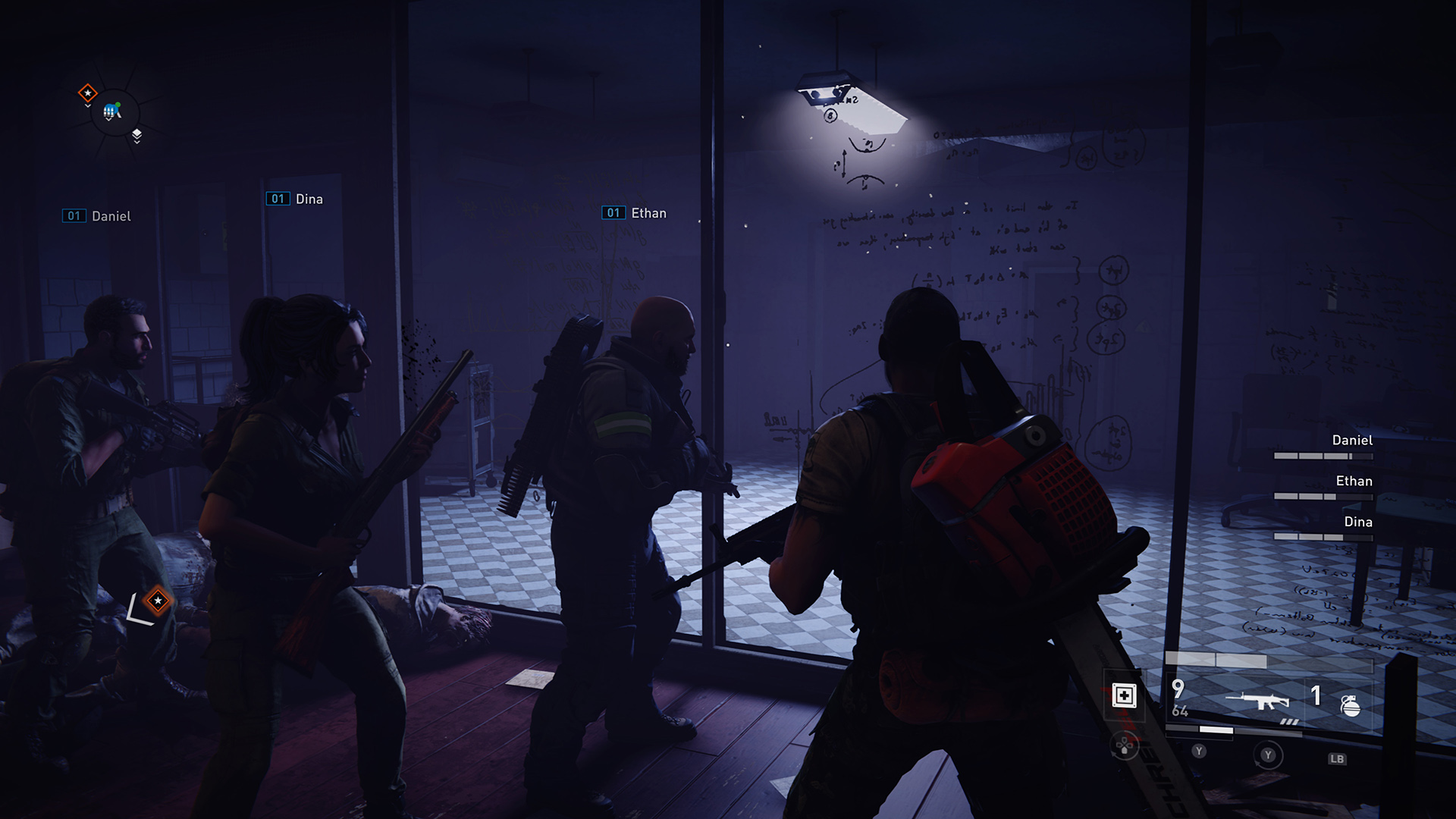 Putting a modern gaming spin on the classic Left 4 Dead formula that is its inspiration, World War Z features an upgradable class and weapon mechanic. There are six customisable classes: Gunslinger, Hellraiser, Medic, Fixer, Slasher and Exterminator; each doing exactly what is written on the tin. As you play you earn credits with can be spent on attribute and weapon upgrades.

The third-person view is very reminiscent of Ubisoft’s The Division games, as are some the locations. The visuals are good, just as you’d expect, but nothing more.

The zombies, like in the film are your modern, running 24 Days Later variety, rather than the traditional shuffling George A. Romero type. There’s also loads of them. Possibly the most zombies on screen at one time in any game (Days Gone may have more). The zombies do that frightening clambering tower thing from the movie to reach higher ground. A well-placed grenade will, however, see to that. 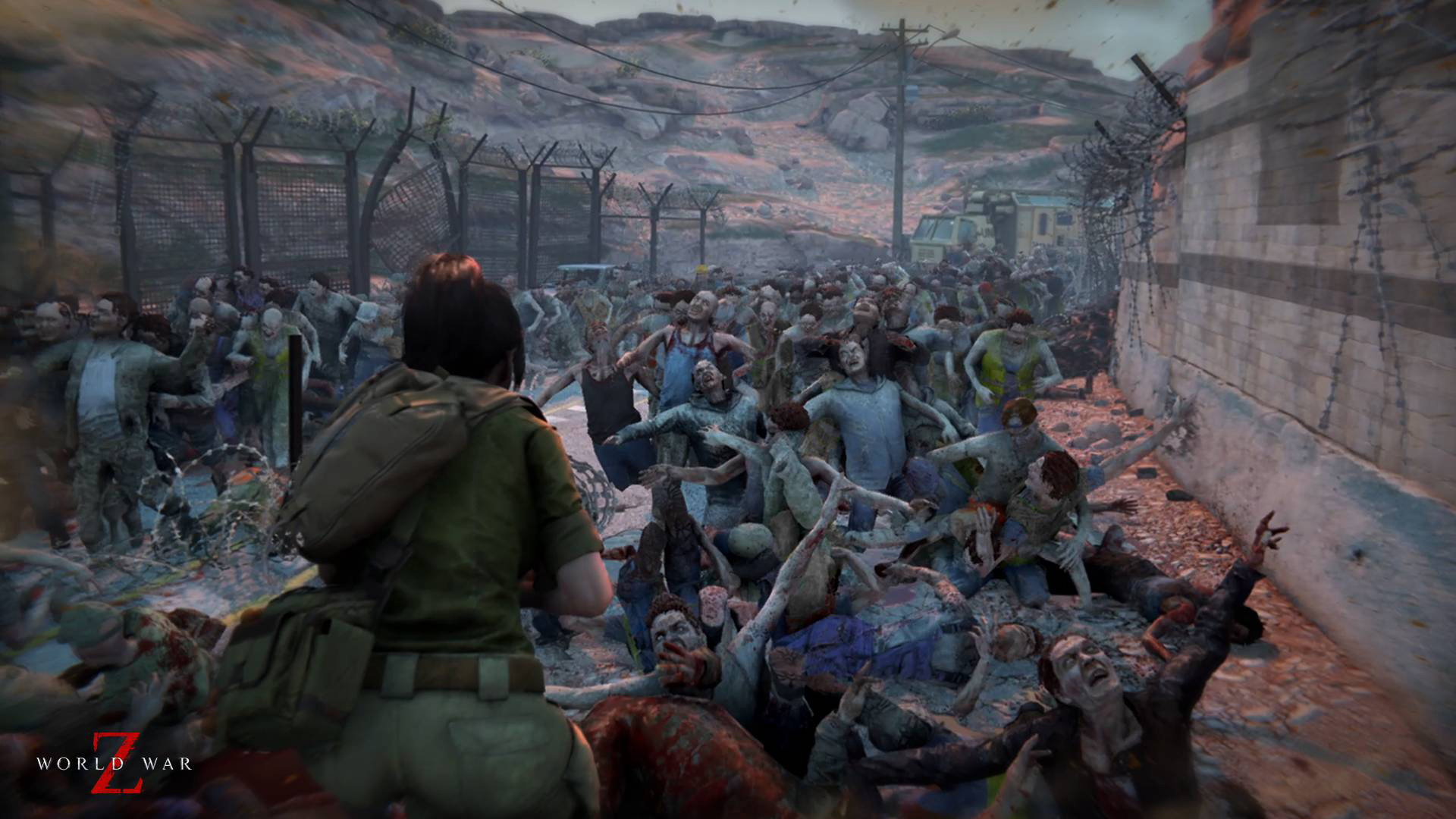 There’s also a number of special zombies, that seem be common of the genre. Screamer draw the horde to your location, whilst the huge armoured bulls will pound you into the ground. Lurkers jump out of dark corners encapsulating you. Hazmat suited gasbags fill the area will toxic fumes that also obscure visibility.

Characters must stock up with a rifle, sidearm and an optional heavy weapon. There’s also medikits and grenades available. These are scattered around, rather than only in safe areas as with Left 4 Dead. The game features standoff areas which sometimes have auto-turrets and electrified floors to strategically position to slow the advancing horde.

The co-op campaign Levels, basically have players fighting there way though the zombies from A to B, to escape to safety. Along the way, there are objects to pick up. Switches that need flicking and VIPs that need escorting. There’s even a nice nod to Call of Duty Zombies, with entrances that need barricading. 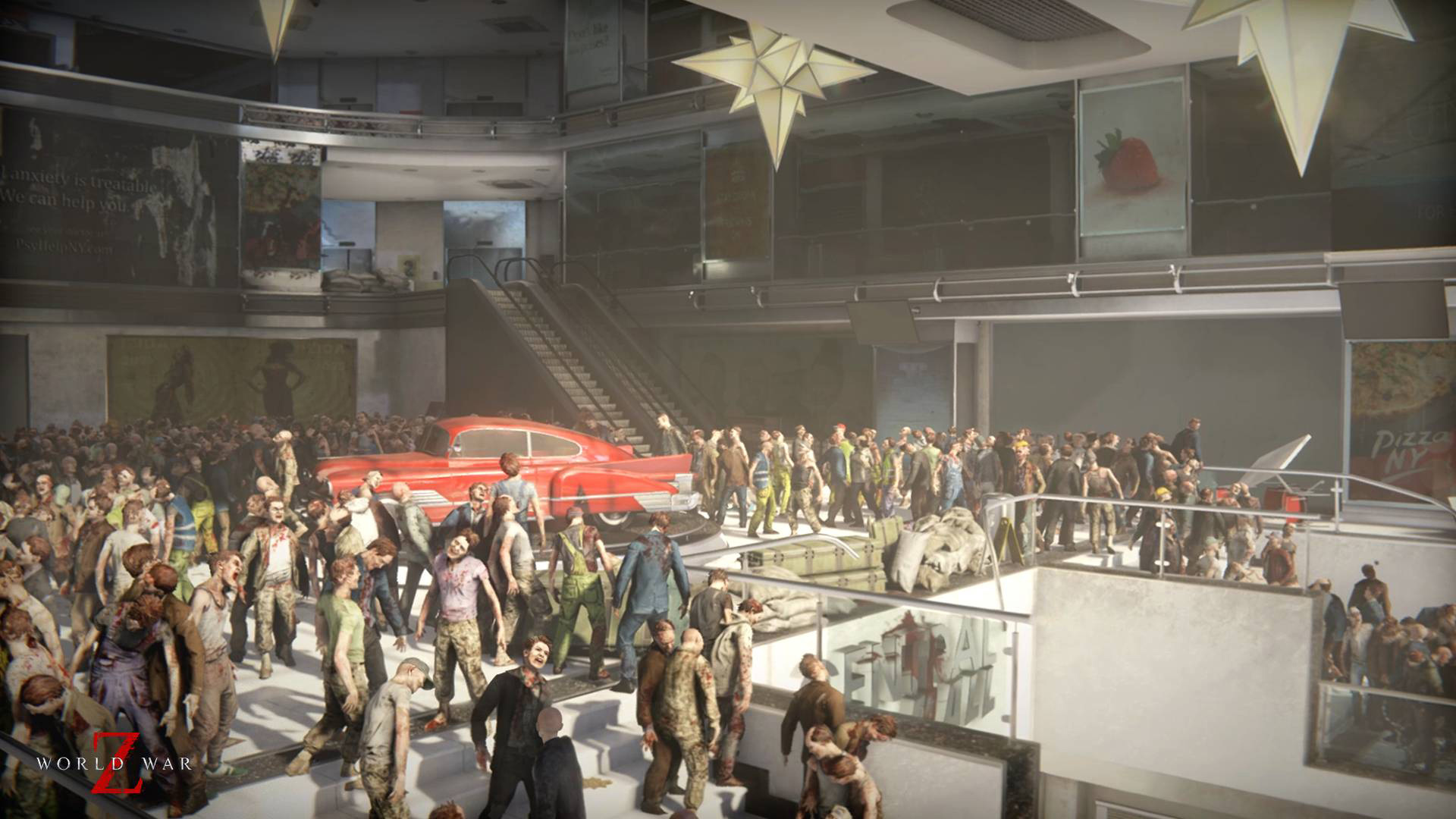 The campaign, aside, World War Z also has a proper competitive multiplayer mode, offering some familiar match types, but with added undead. Classic multiplayer game types such as domination, king of the hill and deathmatch, also with savage raid – which has players collecting resources scattered around the map and vaccine hunt – where plays must try to keep hold of a vaccine for team points. Not only do players have to contend with other players, the levels are littered with zombie who don’t care what team they are attacking.

World War Z is a game that shouldn’t be any good, but actually is really good. If the game had been released with the film, I doubt that the developers would have been under as much pressure to release a good product. The fresh film licence would have likely generated the sales.

Instead, Sabre Interactive have had to work for their money, giving us a game that stands on its own, yet very much draws on the overwhelming hordes of zombies as portrayed in the film.