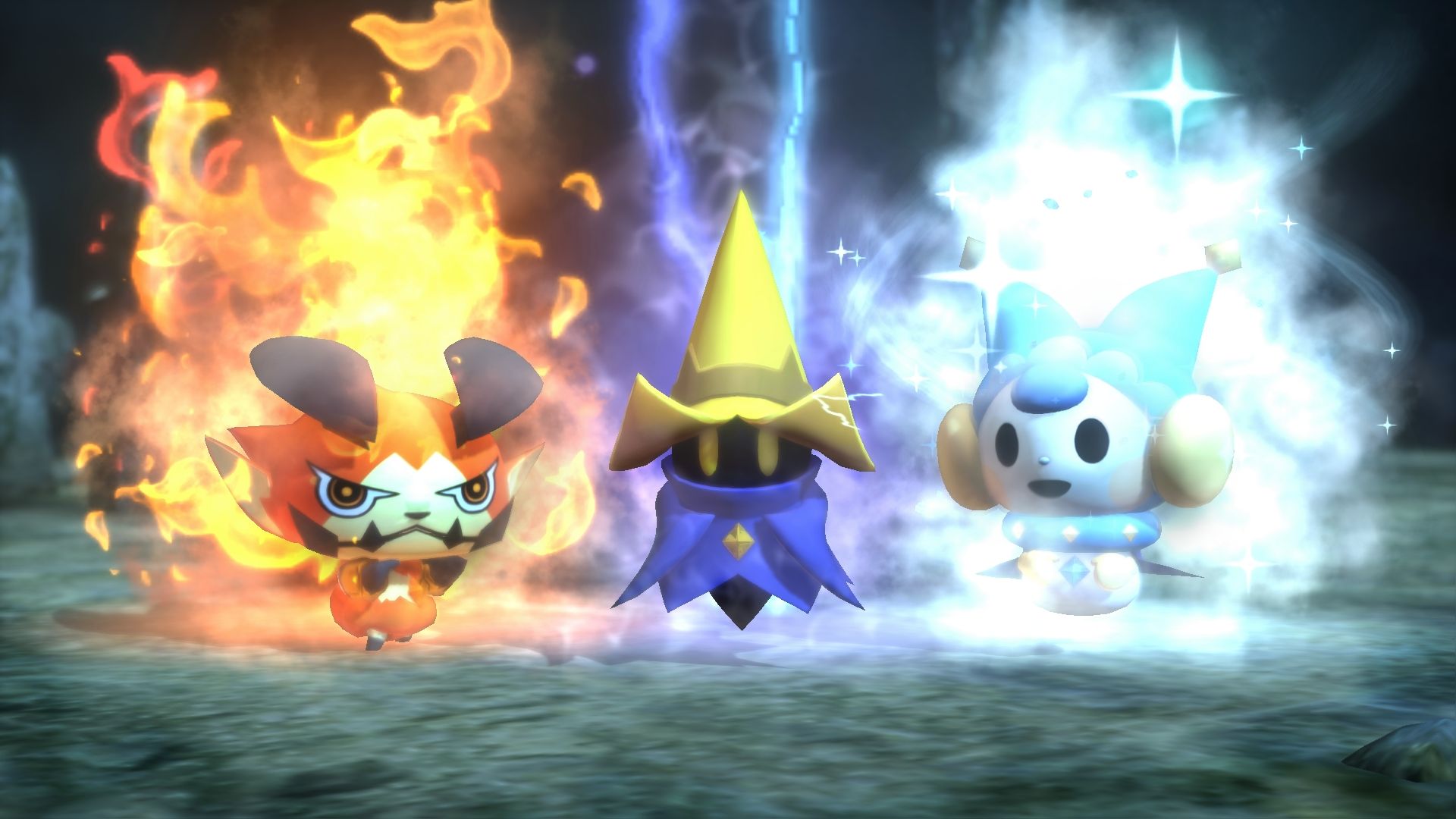 Unlike Final Fantasy XV, and possibly to counteract it, World of Final Fantasy sticks closer to the traditional Final Fantasy games. The world just feels like a Final Fantasy world, complete with the wondrous magical environments, variety of superbly designed gorgeous creatures and tactical orientated battles.

In World of Final Fantasy we are introduced to the enchanting land of Grymoire, a strange place filled with a race of adorable small people known as Lilikins. However, all is not well as the land is plagued with fearsome creatures known as mirages.

The story centres around two twin siblings, Lann and Ryenn. Like all siblings, they can be both annoying and amusing. Despite being twins, Lann and Ryenn couldn’t have any more different personalities, Ryenn being the serious one and Lann just wanting to have fun. This opens the door to some amusing interactions, with the characters acting like the siblings they are. 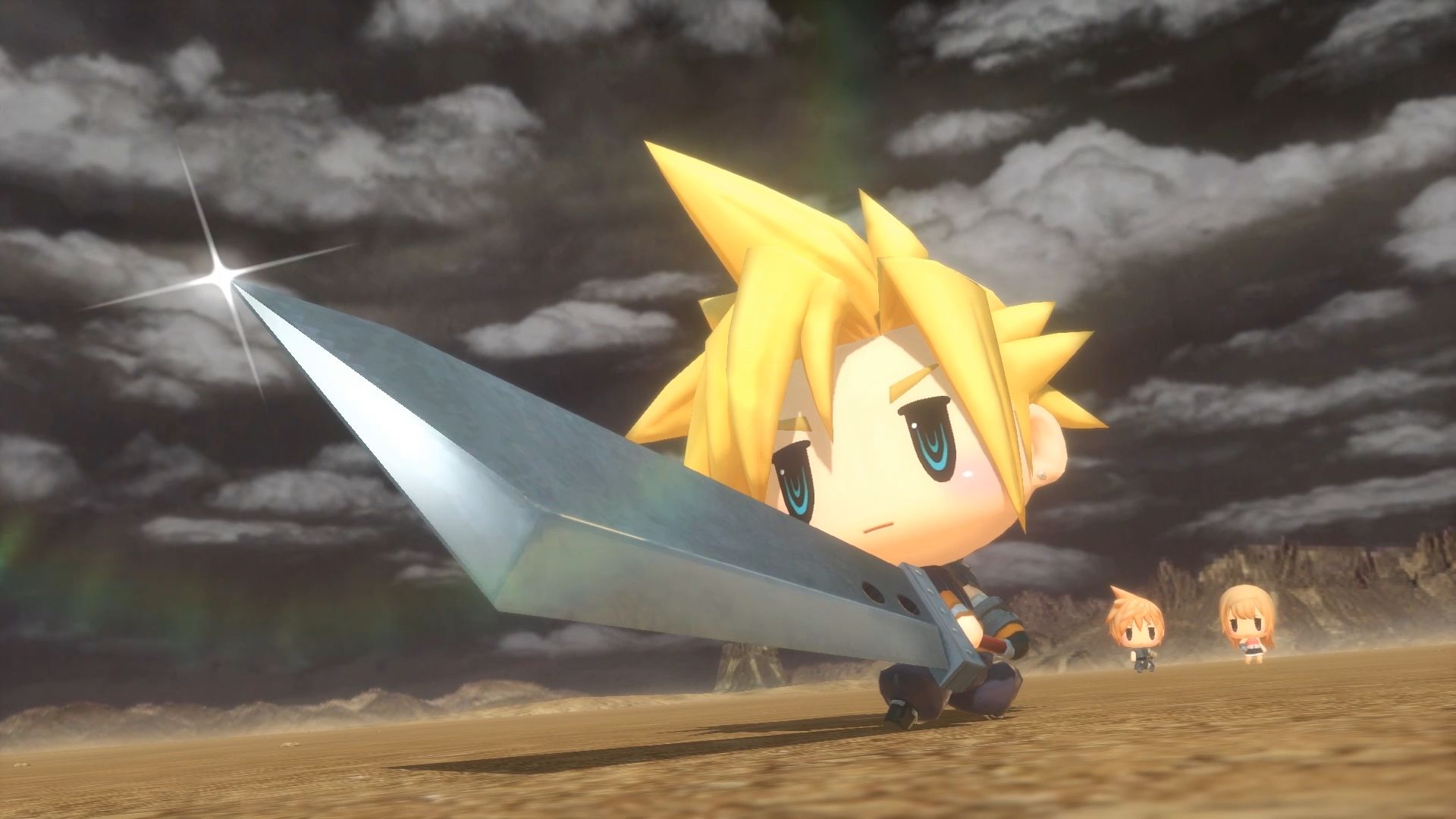 The story begins with them being awakened after an unknown amount of time in an almost timeless world. With no memory of who they are, it is revealed to them that they were once quite powerful Mirage Keepers, basically Pokemon Masters. With the world in a sorry state, they must return to land of Grymoire to recapture all their lost mirages and hopefully regain their memories.

The story progresses from here, following these two entertaining characters as they discover their own forgotten past on their quest to save Grymoire from a darkness that threatens to engulf it.

The mirages are strange and sometimes whacky creatures that you can collect, train, evolve and use in battle, a lot like Pokemon.The creatures are beautifully designed and,more often than not, utterly adorable. I honestly can’t remember coming across a creature I didn’t like my biggest problem was picking which ones to use as they were all just too cute. 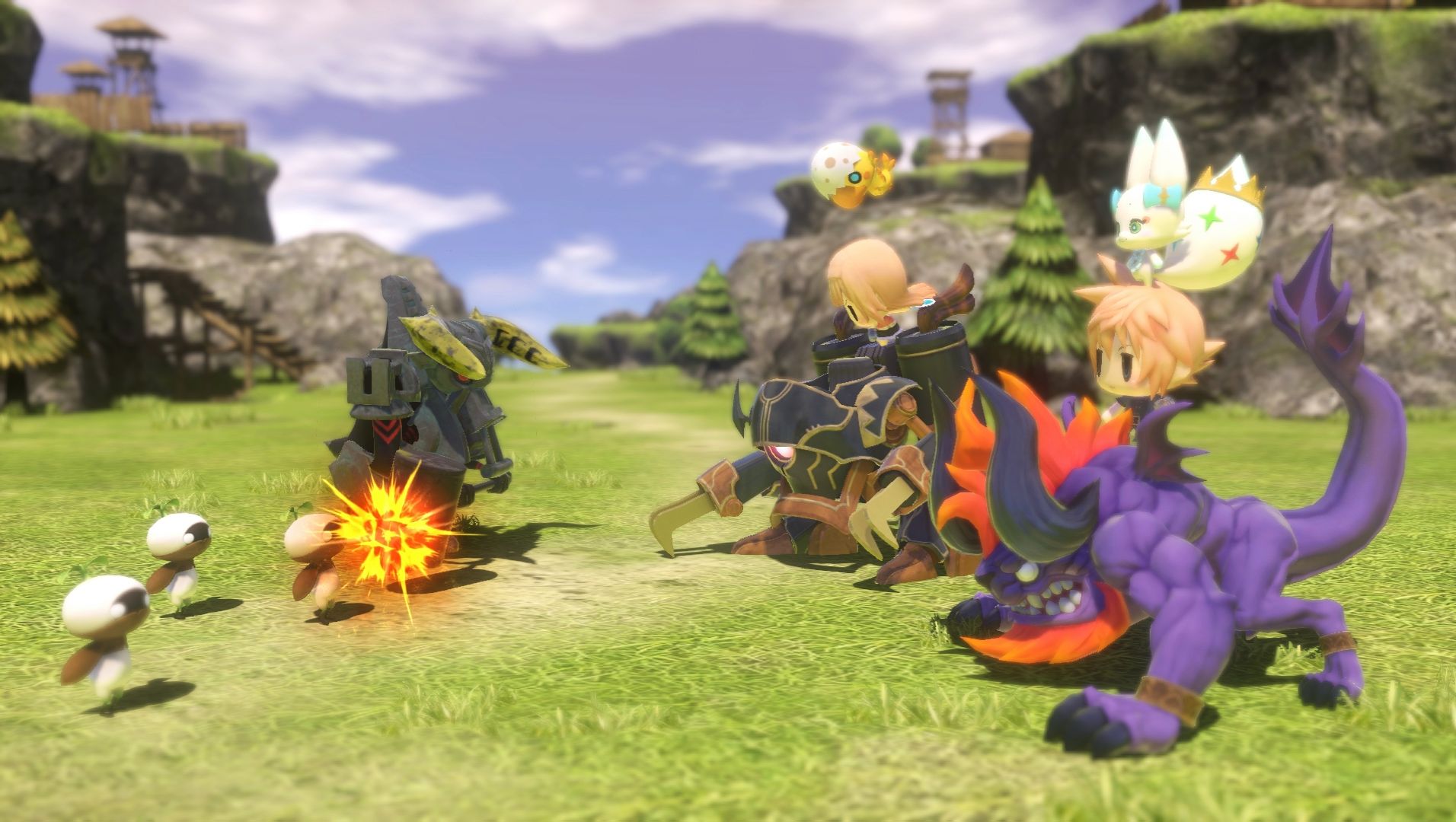 It isn’t just the mirages that you stack, Lann and Ryenn must also be in there. Luckily, they are able to transform between different sizes enabling you flexibility in where you place them. Once a stack has been decided upon the order of battle is determined by the combined speed of a stack. This is indicated by a bar that moves all the active combatants along it until it’s their turn.

The game gives you an option of how you want to play from here. You can either have it pause once it is your turn so you can think through your attack options. You can alternatively make it more fast paced by making time continue to run meaning you need to make split second decisions about your next move. While I’m not traditionally a fan of hybrid systems, this is one of the better systems I’ve come across as it allows you to choose where it sits in this awkward middle area between turn based and real time.

World of Final Fantasy brings back some of the older classic features the franchise is known for. The mirages upgrade via a simplified version of a sphere grid from Final Fantasy X which I found enjoyable to use. Many of the beautifully designed creatures hail from various other Final Fantasy titles. There are many well-known and beloved characters that make an appearance for veterans of the series to get nostalgic over. 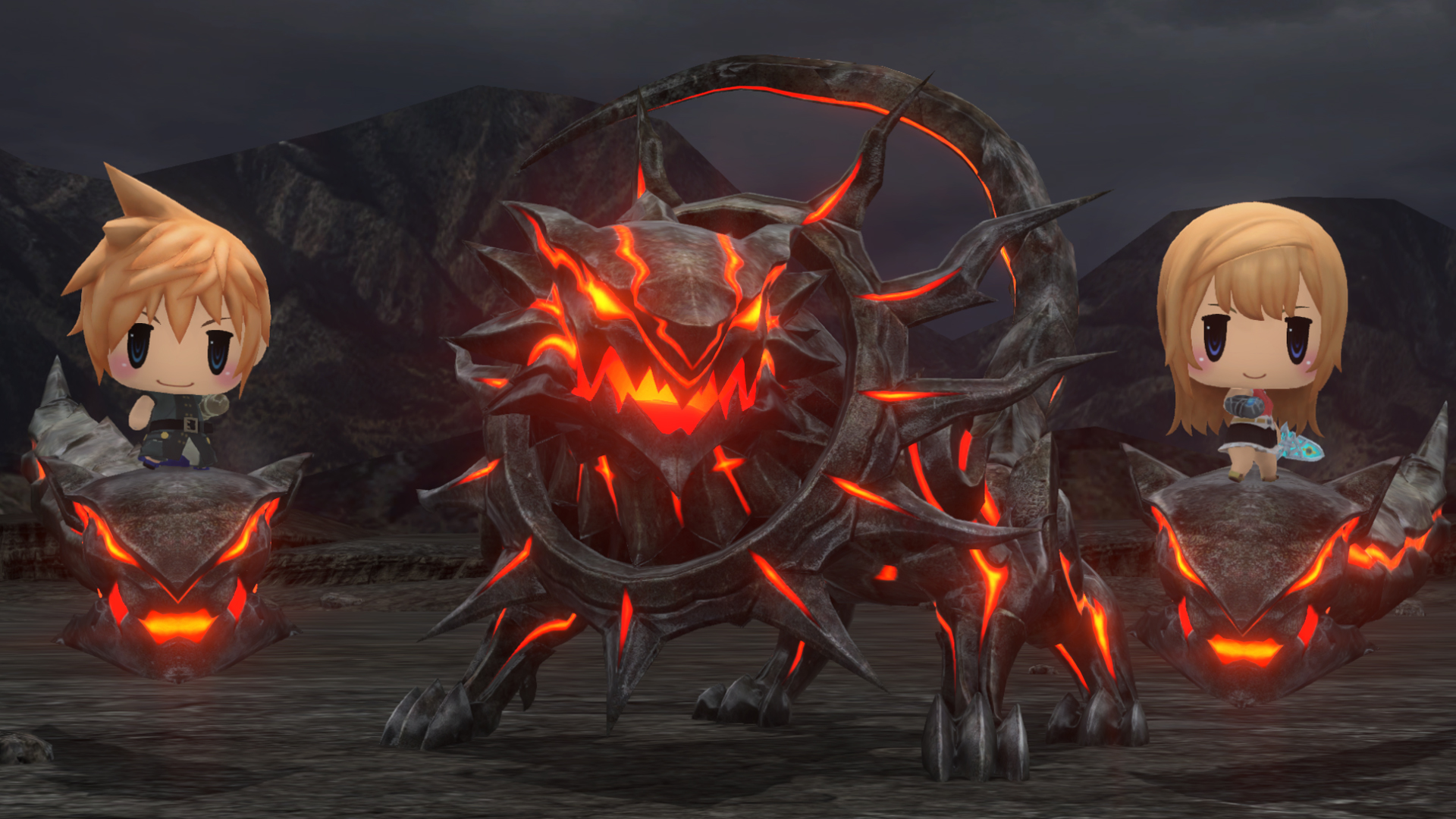 One old classic feature that I wished stayed in the past is the Save Crystals. It can be very inconvenient trying to find the nearest save crustal before you can quit the game. Especially as running around levels initiates random battles thus adding a bit of frustration to the mix when you simply want to save the game. While not all classic elements are welcome, the majority really do a fantastic job of providing a Final Fantasy game that stems closely from its origins.

The universe is quite charming and while levels are quite linear in nature I never found them dull to traverse. Each area has a unique aesthetic and sound that provides a well-rounded environment to explore. The cartoonish style of the game allows for less detail but it still manages to provide a well decorated environment. It’s rather colourful art direction is welcomed and compliments the overall charm of the game. 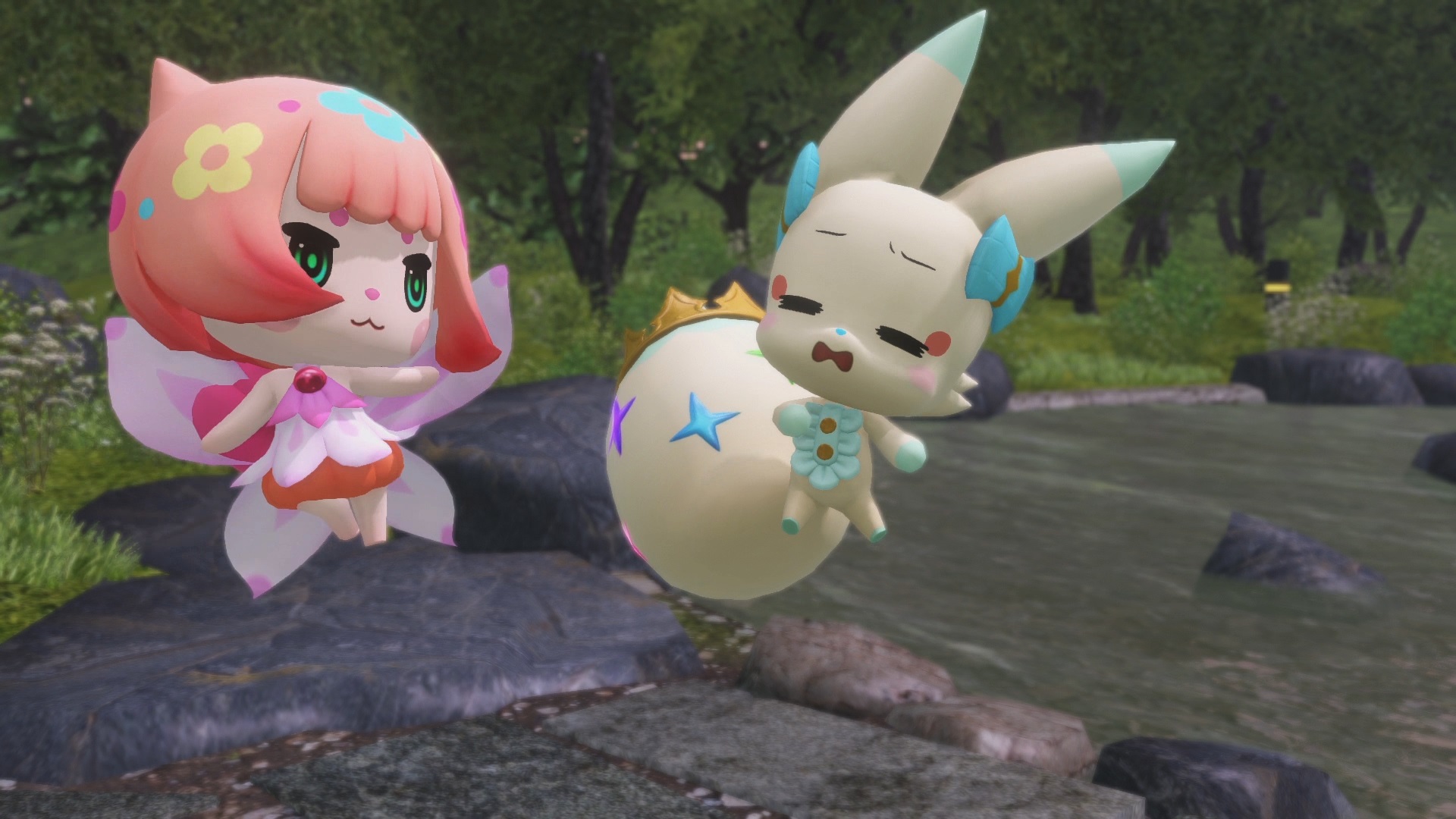 World of Final Fantasy is a delightful vibrant game that incorporates bits and pieces from previous Final Fantasy games to give fans of the franchise something to reminisce over and for newcomers, a still fabulous array of characters to discover and interact with.

It has a battle system that allows for all levels of player to adjust and modify to their liking with cute and interesting creatures to collect for many unique combinations and continually diverse combat experience. The story is engaging and the two main characters, though annoying at times, do keep you amused. I would happily recommend this game to both fans and newcomers alike.