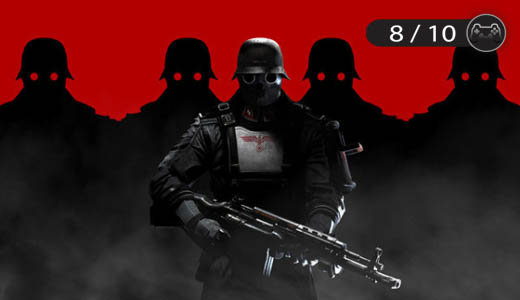 If the ill-fated Duke Nukem reboot a couple of years ago taught us anything, it’s that sometimes gaming classics from the past are best left there. Given what a colossal disaster that outing was, I went into the reboot of my beloved Wolfenstein with a sense of dread.

Worrying what they were going to do to my beloved Nazi-shooting fantasy.

Luckily, my fears were completely unfounded – Wolfenstein: The New Order delivers a more than competent FPS experience, tied together with an excellent plot, some excellent set pieces and a fantastic overall experience. 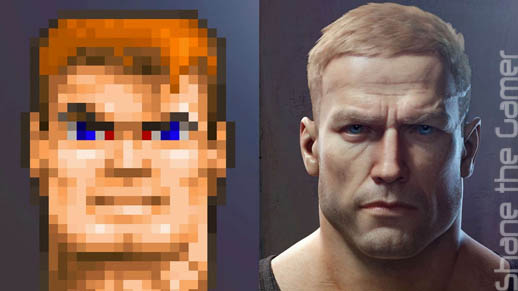 The year is 1946, and we’re living in an alternate history where the Nazi’s have gained control of some very powerful technology and have put together an unstoppable war machine.

Times look grim for the good guys, so William “B.J.” Blazkowicz and his ragtag group of allies engage in a high stakes assault against a Nazi stronghold, home to the nefarious and sadistic Nazi mastermind General Wilhelm “Deathshead” Strasse.

The intent of the mission is to stop Deathshead and put a stop of the flow of futuristic Nazi technology the Axis have been using to win the war. But things don’t go quite as planned – with B.J and his team getting captured and tortured by the sadistic Nazi, and B.J ending up spending the next 14 years paralyzed in a Polish mental institution, watching the world go to hell and unable to do anything about it. 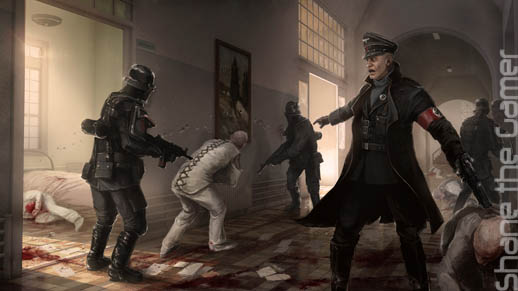 Eventually, the mental home comes under siege from the Nazi’s and B.J roars back to life, with the single-minded of intent of putting an end to the Nazi regime, getting some well-deserved revenge of Deathshead, and getting back to the good ol’ U.S of A for a barbeque.

Wolfenstien doesn’t set out to reinvent the wheel with its first person shooter gameplay, but it delivers an excellent experience nonetheless, simply through offering a fun, over-the-top dual-wielding system, a collection of joy and simple guns to play with it and a decent and effective cover method.

The dystopian future the game is set in, in which the Nazi’s have access to technology hundreds of years more advanced than anything on the Allies side, means that you’ve always got something interesting to shoot at, be it a giant, four-legged robot, a cyborg dog, or a heavily armored super soldier carrying a gattling gun around. 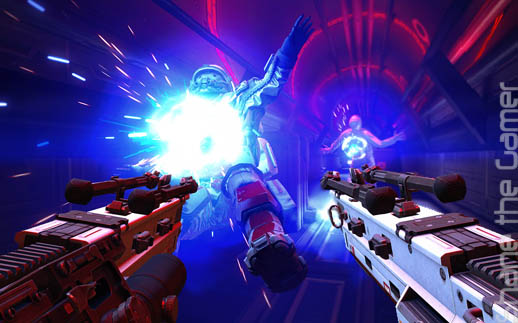 What really sets Wolfenstien apart is the excellent stealth option most missions give you to tackle your objectives with.

B.J is more than proficient at blasting away enemies with an automatic shotgun in each hand, but he’s also pretty comfortable sneaking around for place to place, slitting throats silently and darting past waves of enemies.

This gives you to the freedom to vary up your gameplay however you please, which means that the campaign never gets dull or repetitive, across the course of it’s 10 – 12 hour outing. 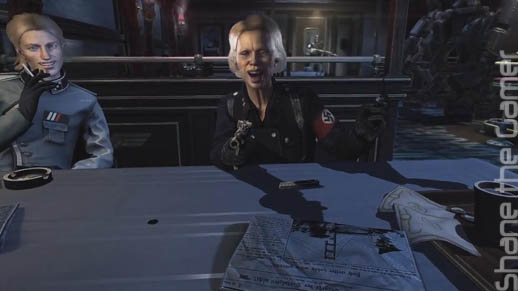 Along the way you can play to your style more, and unlock certain perks to better suit the way you’re choosing to tackle – performing more stealth kills will allow you to carry more knives, killing commanders with grenades will let you carry more bombs, etc etc.

And what an outing it is.

Far from being relegated to the grimy, concrete interior of Castle Wolfenstein, BJ’s journey takes him through a series of interesting and fascinating locales – from Nazi occupied cities across Europe, to prison camps, to a pretty fantastic undersea Level.

Each of these bits in punctuated by some fantastic, massive events – battles, explosions, chase sequences – so that the pace of the game never dips. 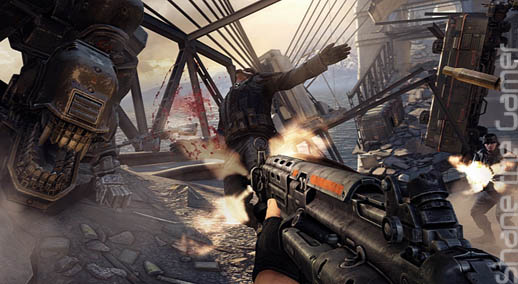 BJ’s own internal narration is thoughtful and elegant too, especially for a man who spends his game killing, and paints a clear picture of a tired soldier just trying to survive and make his way home.

Not everything lands flawlessly – some of the segments with the laser cutter tool can get a bit tiresome – but you can’t fault Wolfenstein on the whole. 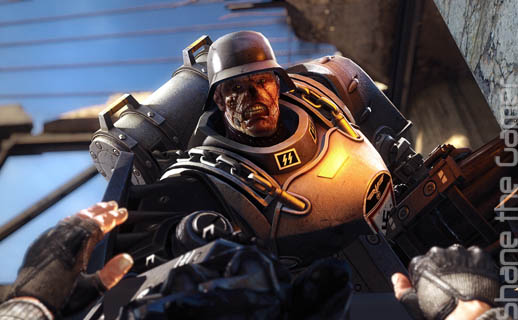 Not only is it a lot of fun in a very old school way, but unlike some modern FPS’s, it’s actually got a bit of a challenge to it.

Never to the point of being difficult, but it’s a nice change of pace to not be coddled by a shooter moniker and actually giving something you can sink your teeth into a bit.