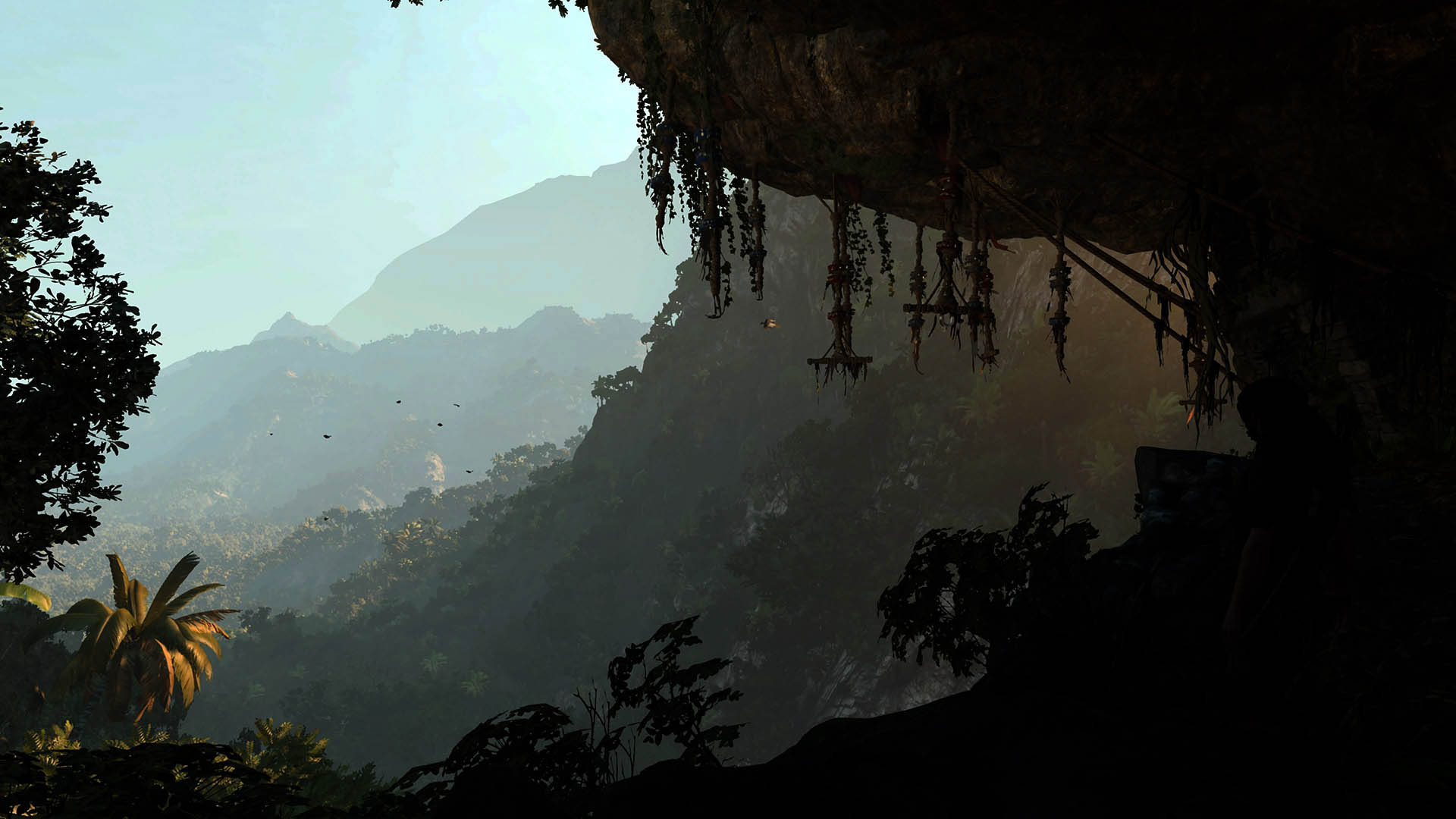 Lara Croft is back in in the third chapter of the reimagining of the classic series. For this game, things are apparently taking a dark turn for the novice tomb raider.

The story continues to follow Lara’s quest to disrupt the intentions of Trinity, the shadowy organisation responsible for her father’s death. This time out Lara starts of in Mexico, searching for a Mayan dagger. It’s her obsession for the artefact that sets in motion events that may just lead to the end of the world. It’s then off to Peru to find a silver box that may, or may not put things right again. Of course, Trinity are one step ahead wanting to use the powerful artefacts for a bit a mischief.

If you liked the gameplay of both the 2013 Tomb Raider reboot and the 2015 sequel, Rise of the Tomb Raider you are in for a treat. Whilst I found the combat in Shadow of the Tomb Raider almost identical to its predecessors, both the stealth and climbing mechanic have been overhauled, somewhat. 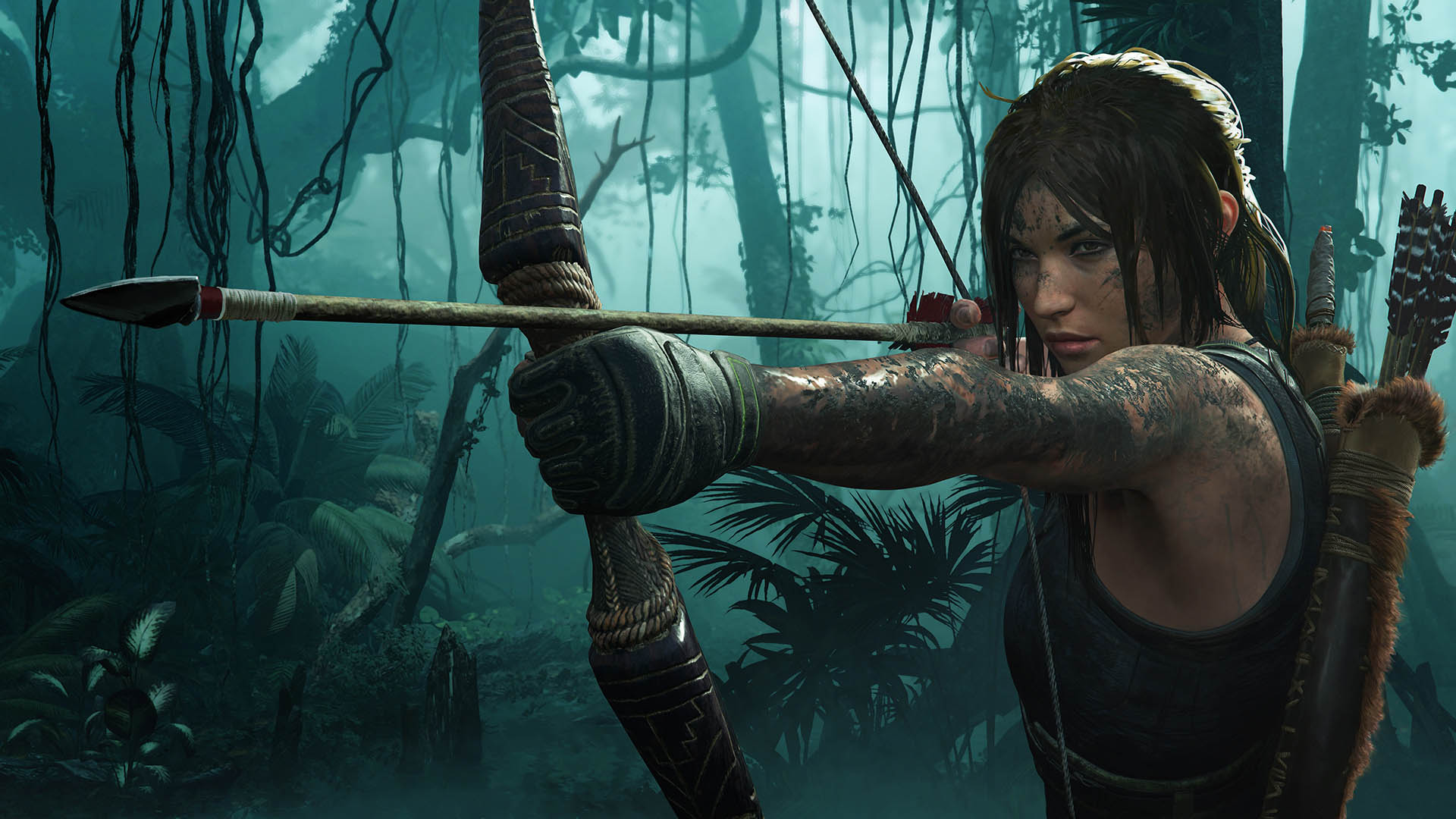 Whereas the original Tomb Raider games were all run, jump and gun when it came to bad guys, these new Tomb Raider games require Lara to tread a bit more carefully, picking the enemy off one-by-one. The bad guys often patrol in numbers and with vastly superior firepower. For this entry in the saga, Lara can cover herself in mud to not only hide from guards equipped with thermal cameras, but also against vegetation-covered walls. As well as just sneaking up behind them, enemies can also be dispatched by dragging them into the foliage whilst hiding against walls and in bushes. Lara can also string up enemies from trees and pull them into water.

Traversing the huge environments has never been more fun or as challenging. Armed with her pickaxe, Ms. Croft can not only scale rocky cliff-faces, she can also, when suitably equipped, now climb up and under rock outcrops, hanging like, well… a spider.

There’s little doubt that the developers, Crystal Dynamics have been looking at the work of their competitors for inspiration, and that’s not necessarily a bad thing. The stealth borrows a lot from Assassin’s Creed, and so do the new fear arrows (crafted from poisonous critters). One hit from a fear arrow and the enemy goes into a mad killing frenzy before dying. Sound familiar? 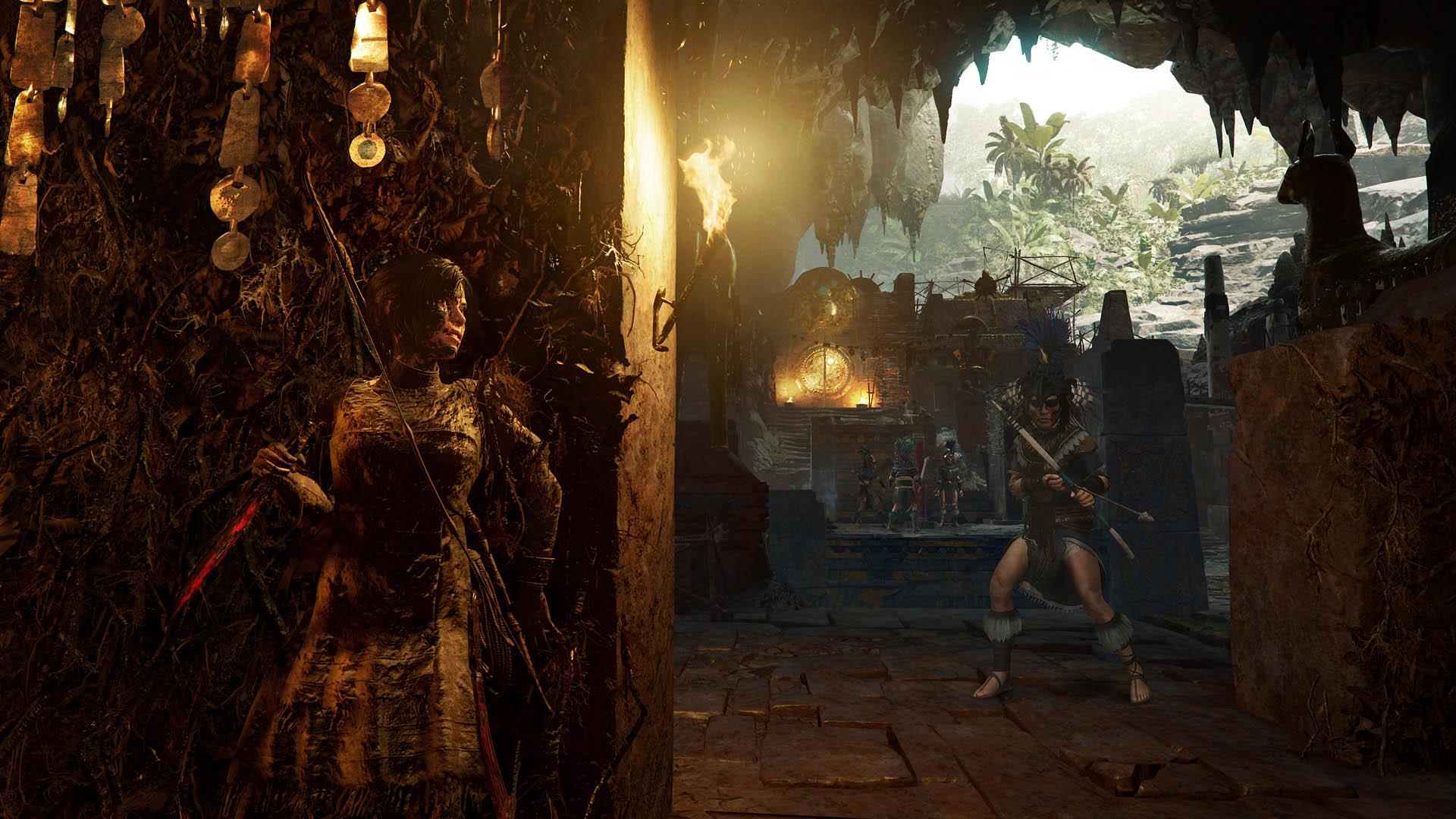 Even though the combat borrows a bit from other titles, when it comes to the puzzles, Shadow of the Tomb Raider has gone back to its roots. One of the criticisms that I had of the last two games were the relatively easy puzzles. I found that there was very little challenge in solving the puzzles of both the main quest line and the optional challenge tombs.

Whereas Rise of the Tomb Raider was a step in the right direction, the puzzles, this time, rival some of those brain- teasers for the original Tomb Raider series. Of course, better Level design means that you are unlikely to be spending hours trying solve a puzzle like you did in the OG Tomb Raider. For the most part, the puzzles in Shadow of the Tomb Raider are quite ingenious. Secrets are revealed and doors are unlocked using wind, fire and water using ancient and often perilously decaying mechanisms.

Both the main quest line and the optional challenge tombs (of which there are not nearly enough) all feature some of the best Level design, when it comes to puzzles and exploration, in the series so far.

Gameplay-wise, Shadow of the Tomb Raider is generally superior to its predecessors. That’s not to say the game isn’t without its faults. 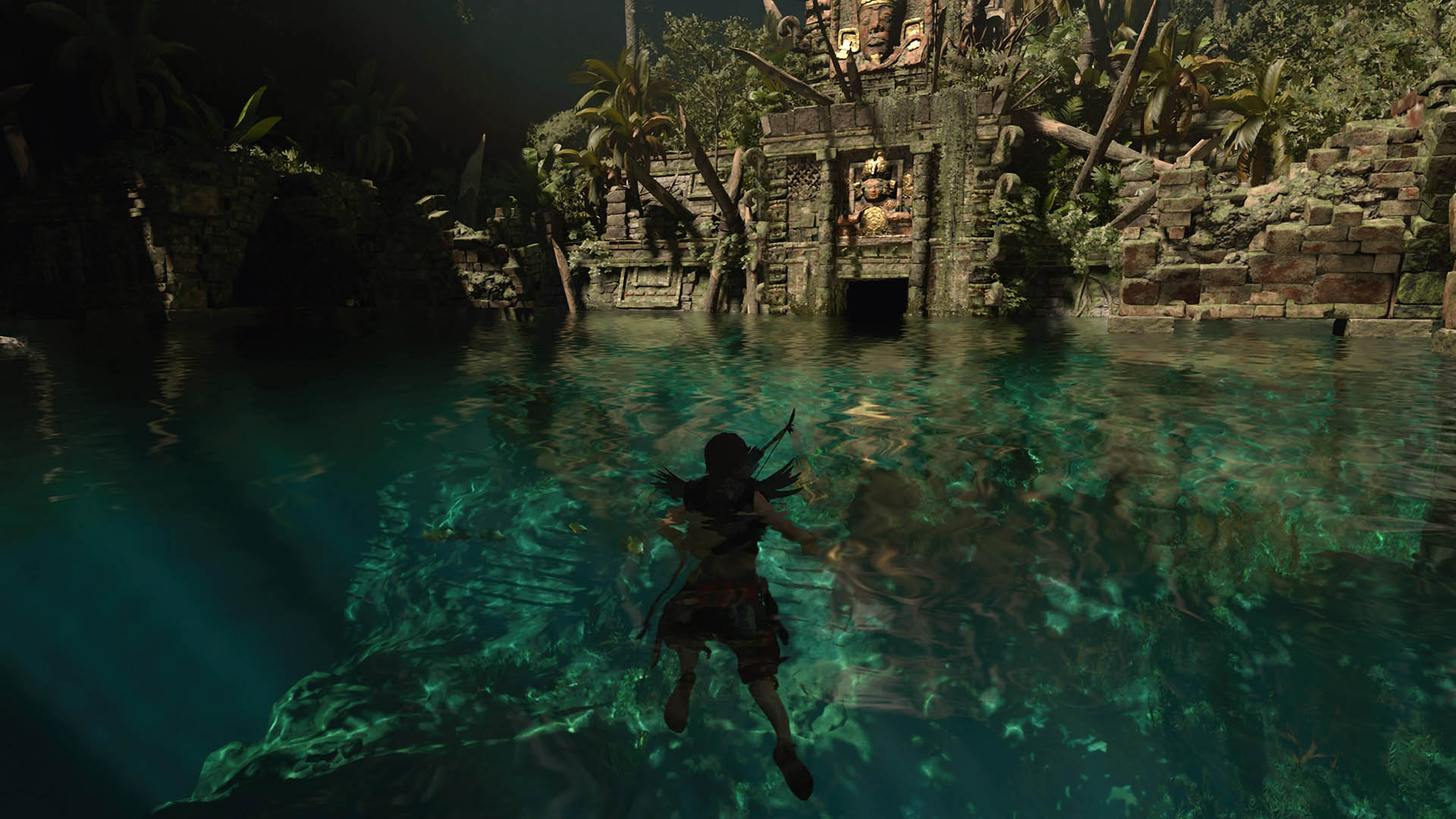 For the most part, the plot works well. Even Camilla Luddington, the voice of Lara, seems to have better settled into the role – only occasionally overdoing the received pronunciation that masks the British-American actress’ Mid-Atlantic accent.

It’s when Lara gets to the Peruvian city of Paititi that the game, for me anyway, hit a narrative roadblock.

Whereas Rise of the Tomb Raider had a hidden tribe of people living in Siberia speaking perfect English with an American accent, this time we have the occupants of a Peruvian lost city, again, speaking English, although to its credit, with a “foreign” accent. You can change the language to Peruvian(?) with the “voice-over immersion” option, but that’s also weird as Lara still speaks to the indigenous people in English. During this segment Lara also dons an outlandish (i.e. awful) costume, which with the addition of an (equally awful) mask, she uses as a disguise – fooling the locals, even with her clipped English Home Counties accent.

The developers seem to strive to give Lara a deeper meaning than just being an archaeologist that likes raiding tombs. It really doesn’t work. Rationalising a videogame character in this manner is virtually impossible. In real world terms Lara Croft is a psychotic murderess, which of course she is not, she’s a character in a video game.

Thankfully, with Paititi behind her, the story picks up, once more. 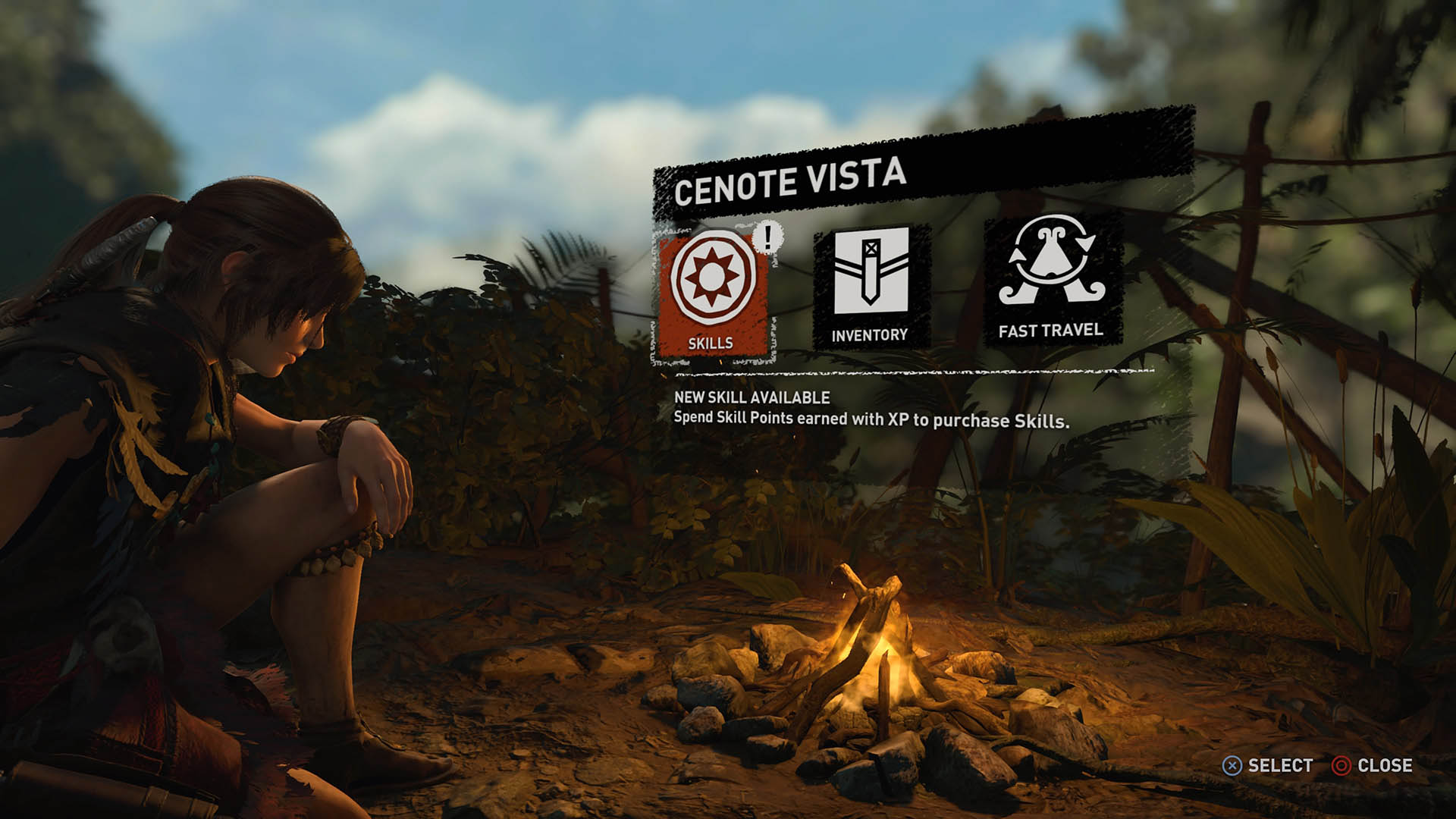 As with the previous games, Lara is accompanied by her Kiwi-born friend, Jonah. unfortunately, he only really serves as Lara’s moral compass (when the plot suits – the rest of the time he is all about the murdering, as well) and as the muscle. Jonah is always there to lift obstacles and open up the next area when the game wants you to move on.

As is now becoming the norm, Shadow of the Tomb Raider includes a photo-mode. I’m not sure if I’m just being spoilt by the graphical advances of the last year or so, but the photo-mode seem to emphasise the nagging feeling that the visuals of the game on the PlayStation 4 Pro, whilst nice to look at, were perhaps up to the standard of many of the game’s contemporaries. Freezing the game for a photo-op, nine times out of ten, revealed a Lara Croft posed awkwardly with a shockingly vacant expression on her face.

Lara’s trip down uncanny valley aside, the game’s environments and the detail in the various tomb and underground chambers are superb. The visuals in the set pieces, which I’m not going to talk about at all, rival those of a Hollywood blockbuster. 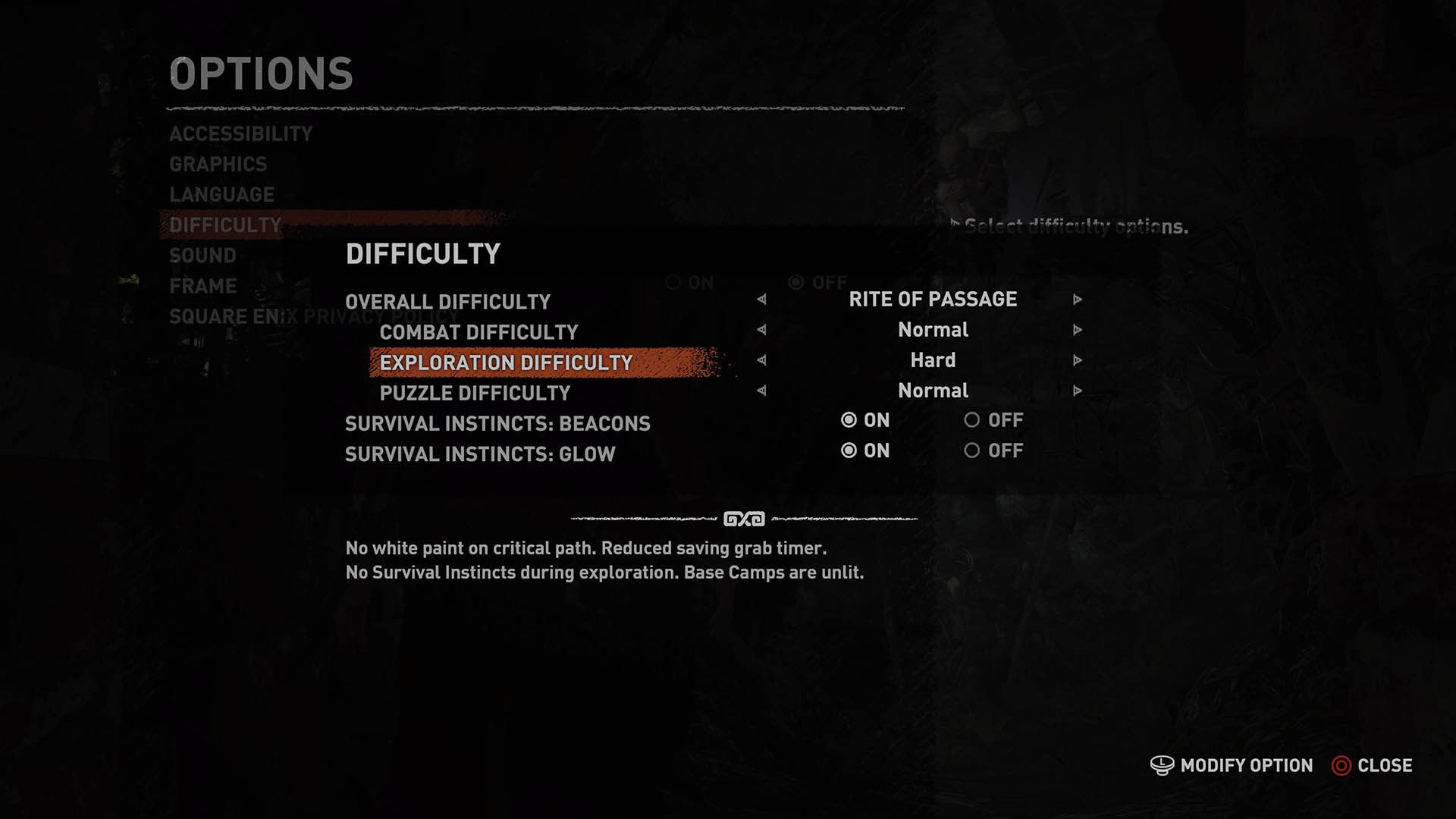 Thankfully, the PC version of the game offers a vast visual improvement over the PS4. Better lighting, higher resolution textures and I’d even say better facial animations make the PC a more definitive version of the game. That being said, running the game on a pair of GeForce GTX1080ti GPUs the visuals are not hugely different from three-year-old Rise of the Tomb Raider. This will change for owners of the upcoming Turing-based GeForce RTX GPUs, as Shadow of the Tomb Raider supports the cards’ ground-breaking real-time raytracing capabilities

New for Shadow of the Tomb Raider are a set of customisable Difficulty settings. Players that are tired of the less than subtle points that designers commonly put into their games to help guide players will be very pleased. Visual cues such as the white paint to highlight climbable items can be adjusted in intensity or removed altogether. The beacons and glowing items using Lara’s survival instincts can also be switched off. Puzzle hints can be reduced and Lara’s health abilities adjusted. There are six variable that can be adjusted to customise the game Difficulty according to taste and ability.

As Lara progresses she earns experience points which unlock skill points. As before, the camp fires dotted about the game can be used to spend skill points to improve Lara’s abilities. At these locations players can also upgrade Lara’s weapons using scrape picked up during the game. 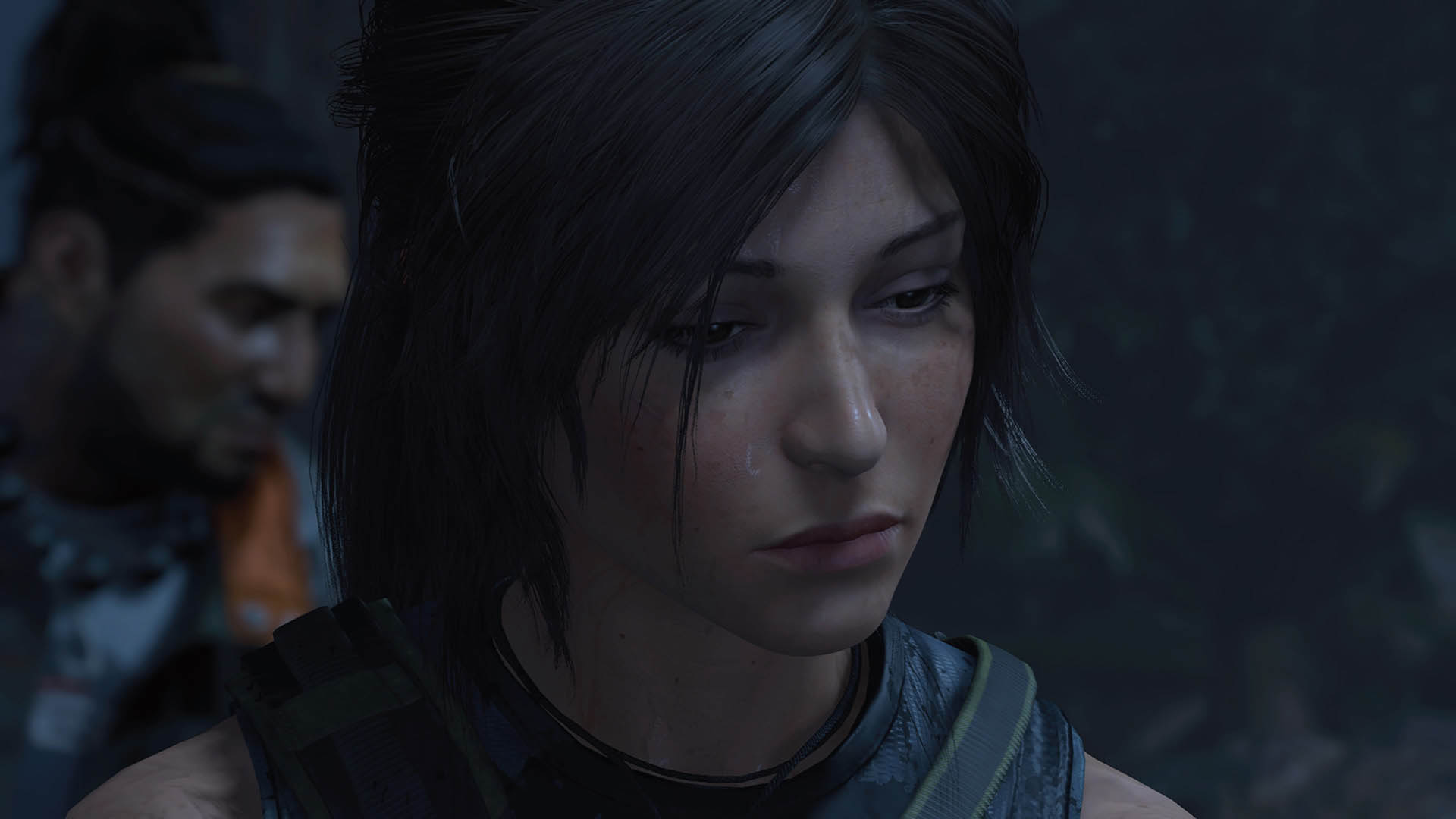 Shadow of the Tomb Raider is a great game, but suffers a bit in execution. It’s a bit uneven.

The puzzles are better, but it lacks the polish of the last two games. The plot is bearable, at least compared to Rise of the Tomb Raider, but the developers really need to do up their narrative game to be in the same ball park as Naughty Dog and their Uncharted games.

That being said, I enjoyed the game immensely. It could, however, be a lot better. I hope that Square Enix take a step back before embarking on the inevitable fourth chapter. 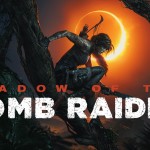