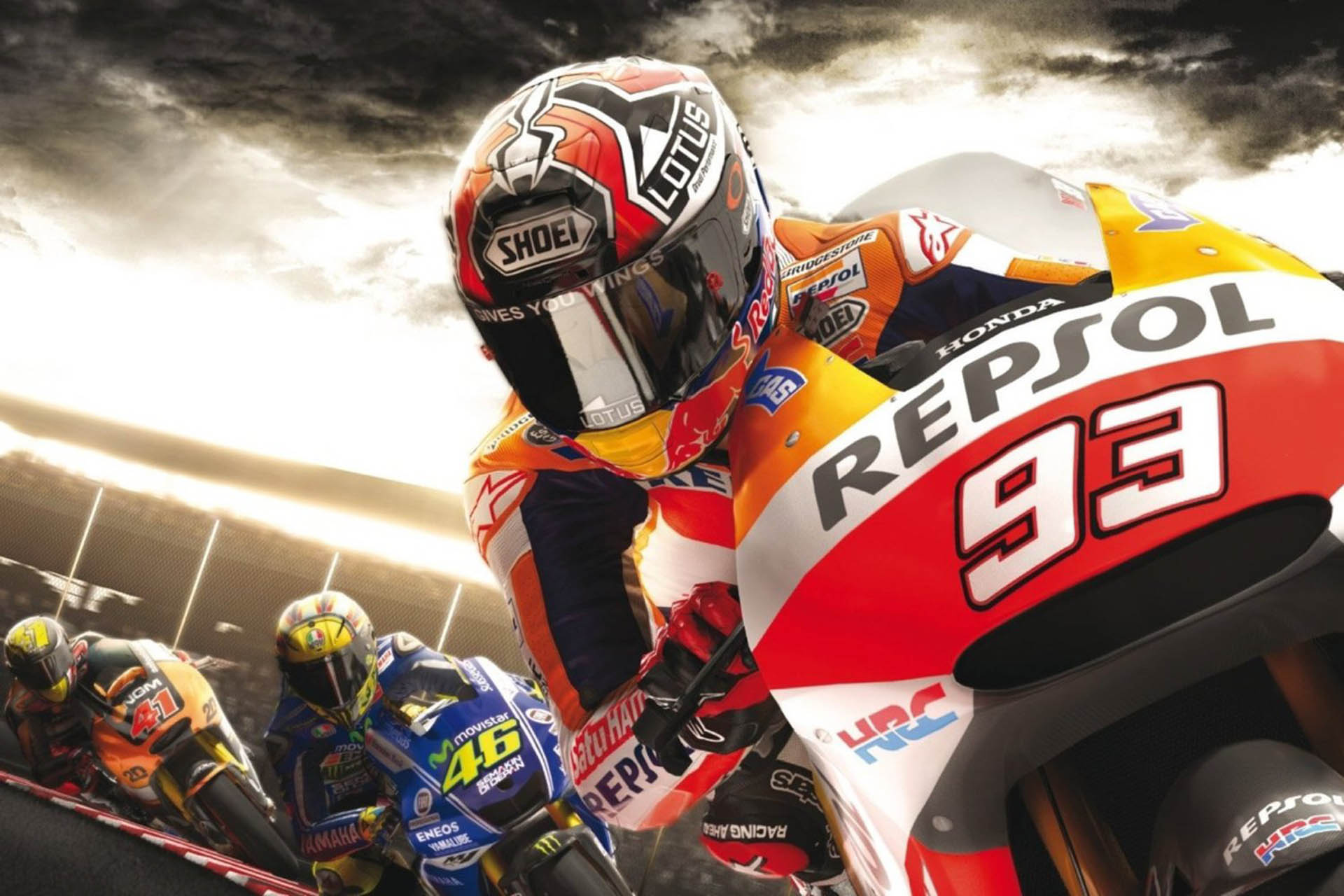 Following on from their excellent, if blandly presented Ride released in March, Milestone are back with MotoGP 15, adding a bit of glitz and glamour to the proceedings.

For this entry, the developer really seems to have really embraced new-gen technology to give us a two-wheeled racer seemingly running full throttle at 60fps. This affords MotoGP 15 with a level of precision unlike any other console motorcycle game available. It also manages to translate the break-neck speeds experienced on the track over to your TV screen. 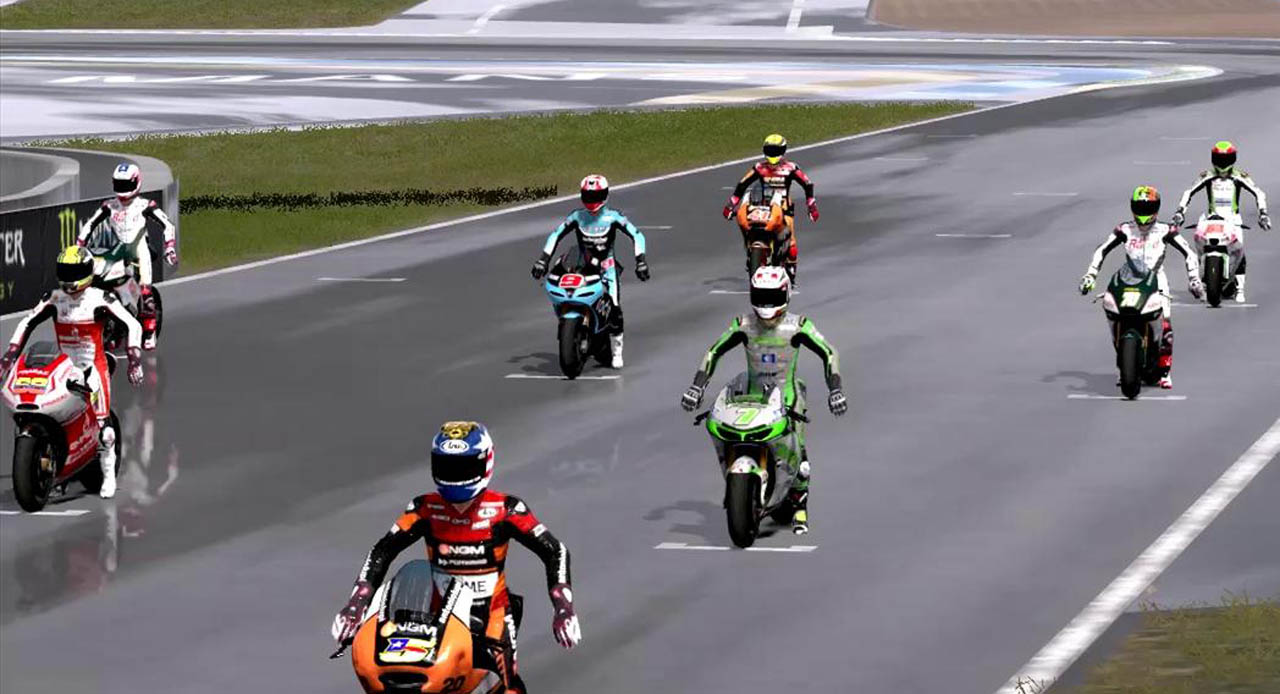 The game features bikes ranging from classic two-stroke pocket rockets to arse-clenching 1000cc superbikes, all spread across a variety of different Championship classes. As well as taking part in this year’s and last year’s MotoGP, players can also choose to enter Championships or individual grand prix sessions across Moto 2, Moto 3 and historic MotoGP 2-stroke competitions.

You can find all your usual bread and butter race modes in MotoGP 15, allowing players to quickly get into a race, a Championship or their own MotoGP Career. There’s also time attacks and special events based on real-life situations from the MotoGP 2014 season to keep players busy.

Two-stroke fans can enjoy some additional challenges based on historic and fictional scenarios. Those that enjoy their gaming to be a little bit more social will be delighted with the game’s 12-player online and two-player split screen multiplayer modes.

Before you head online I suggest plenty of practice. 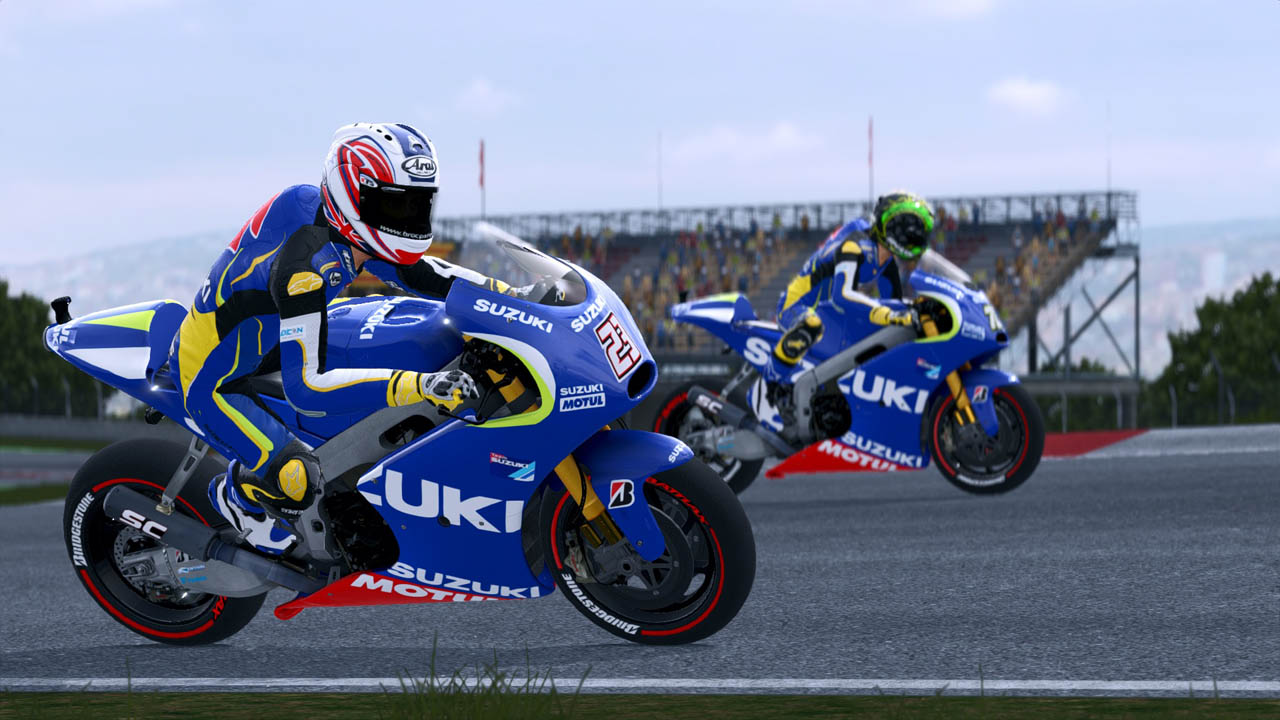 Racing on four wheels just doesn’t compare to the thrill of hurtling along a circuit on two wheels. Leaning a bike around bends and accelerating away is exhilarating. MotoGP 15 is fast and the controls very sensitive. This is exactly how a motorcycle game should be. But, unfortunately, for most of us at least, we are likely going to spend an extraordinary amount of time sliding along the tarmac.

Moto GP 15 is an unforgiving piece of work that certainly had me cursing like a trooper. And whilst the game is equipped with all the usual riding aids like assisted braking and steering, the moment you switch these off the difficulty level goes vertical. 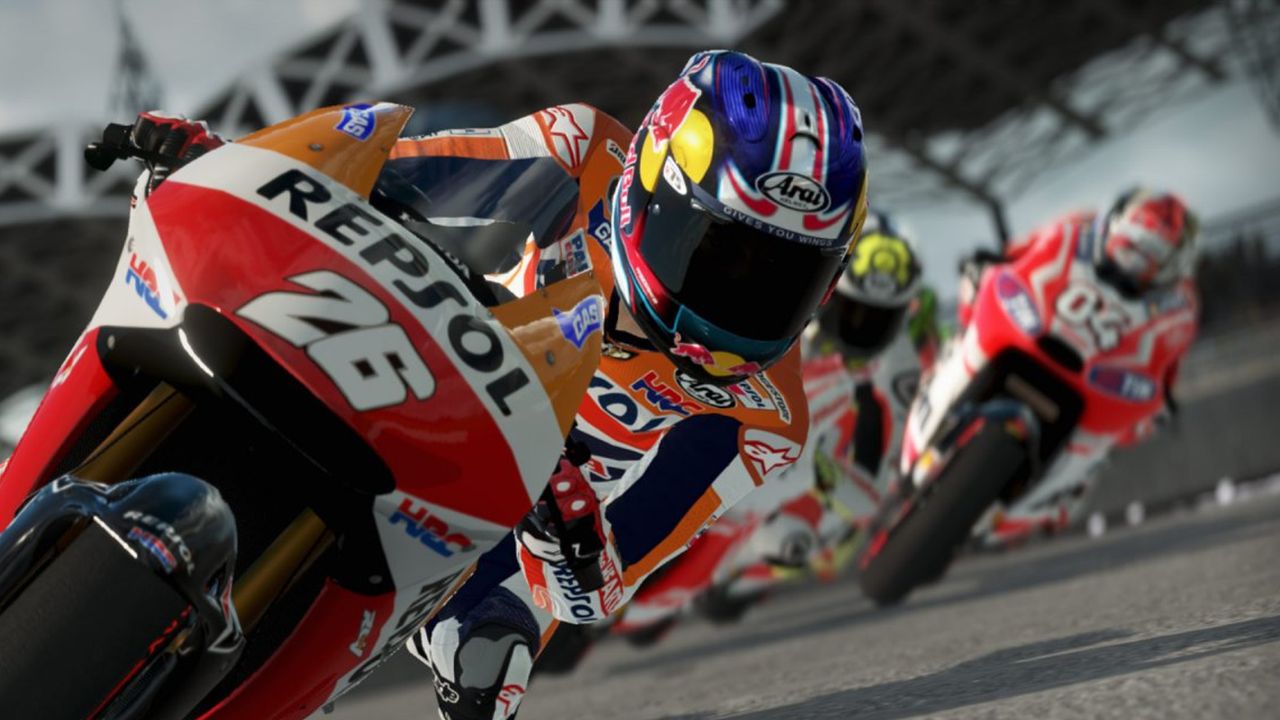 To get the most out of MotoGP 15 players are going to need to be either really into their superbike racing or have a lot of patience.

Like the more casual and player-friendly Ride, MotoGP 15 is best played with all the training aids switched off from the beginning to meet the game’s learning curve head-on rather than letting the aids lead you into a false sense of security.

Keep your racing line on, but switch off the steering and braking assists, and even switch on independent control of the front and rear brakes.You can easily do this by simply switching to Pro Physics in the racing aids section of the options menu. 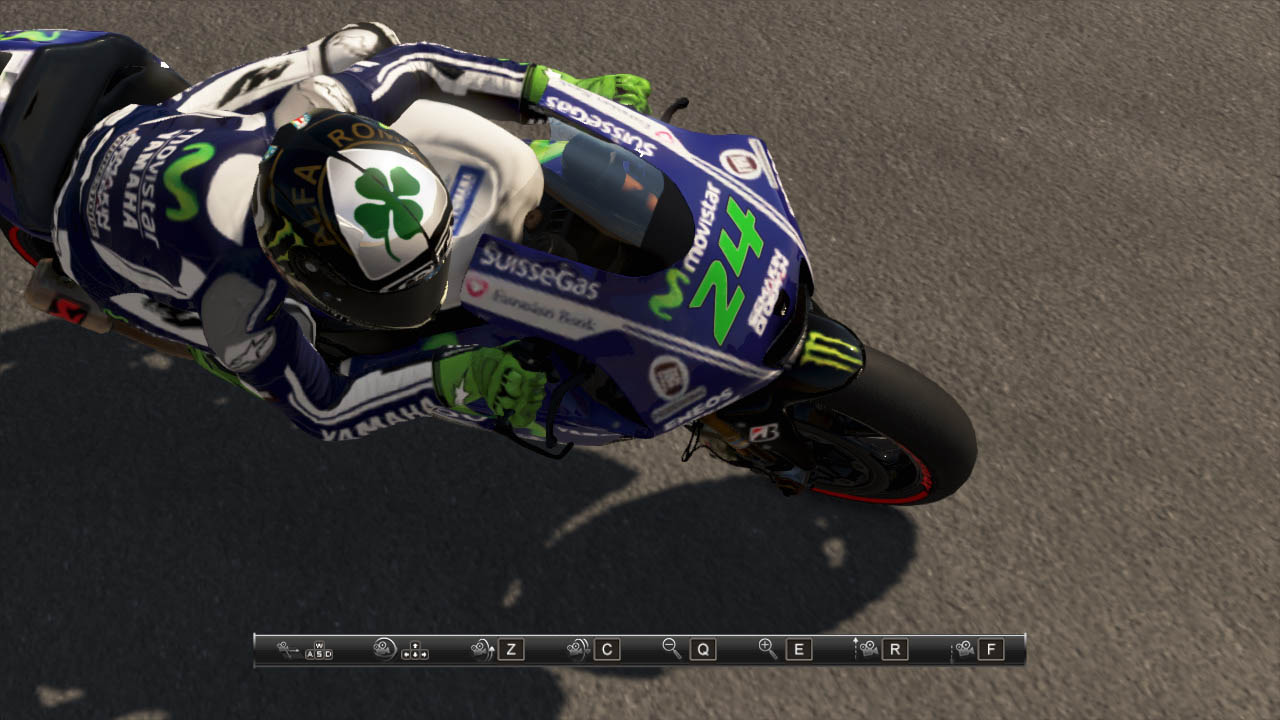 Manual control of tucking-in will allow for that essential bit of extra speed that comes by minimising drag. Also, some use of the game’s genius semi-auto gearing allows bit of speed fine tuning into and out of corners. If you decide to keep your training wheels on, you are in for one hell of a learning curve later on.

As with most modern motor sport games, it’s no good trying to go full throttle around a track.

Sure, on the straight you’ll be going great guns, but to win you must get into the rhythm and flow of the cornering. And it takes discipline. In control of such power it is all too easy to go full steam towards a corner with no hope of stopping. Motorcycle brakes are rubbish compared to a car and if you overshoot a corner you will lose valuable time. 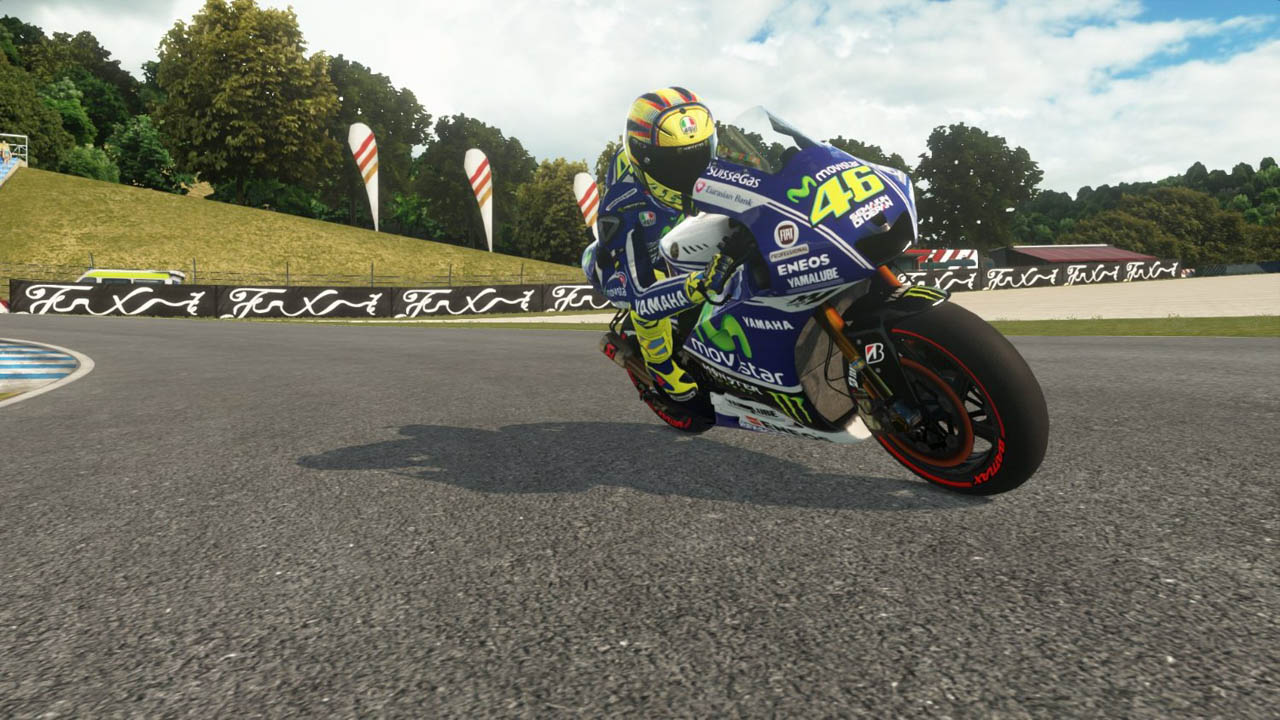 Having played a few motorcycle racers before, I thought I’d be fine going straight into a full-on 1000cc MotoGP Championship. It was only after a few frustrating laps that I realised that this was not the case.

Whilst the tutorial does a good job of introducing new players to the control scheme, only practise is going to get you around the track. The game does offer that common racing game cop-out that allows you to rewind the race, but most of the time I found my riding error occurred long before the limit of the rewind function.

Starting again, this time swapping the performance superbikes for slower and of smaller capacity bikes, I was finally able to keep upright for a whole race. 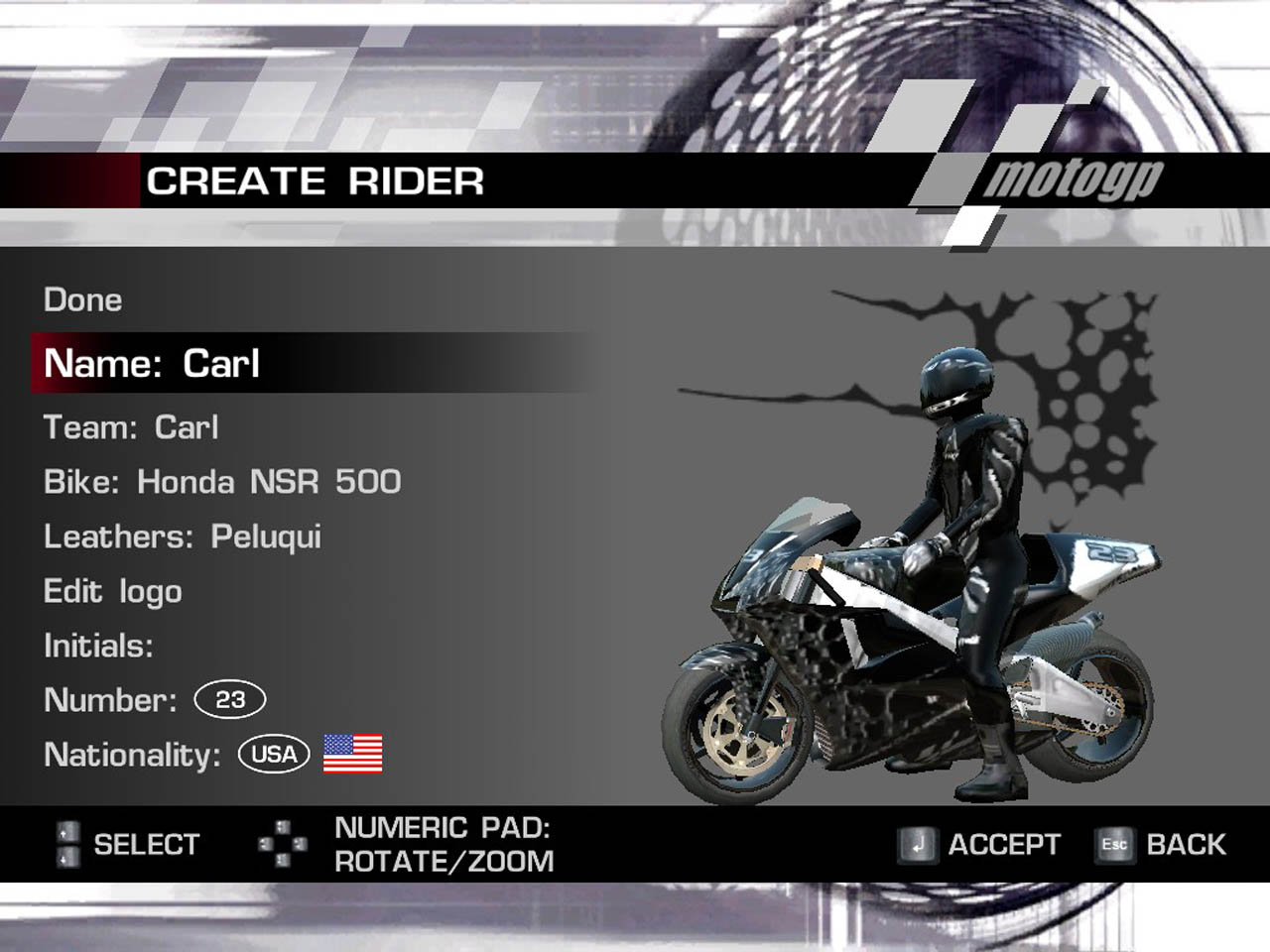 The simulation aspect of the game is fully featured, with tyre wear, bike damage and weather that varies race-to-race. Accelerate too fast and you’ll wheelie, grab too much of that front brake and you’ll do an impressive, if usually catastrophic, stoppie.

With the Pro Physics setting the game give players full control of the bike allow you to shift the rider’s weight forward and backward as well as tucking in for better aerodynamics. The game’s brilliant semi-auto gearing means that players can, if they choose, time their change of gear themselves gaining further control of the machines speed and acceleration. This and independent control of the front and rear brakes leaves it up to the player as to how much risk to take on corners to gain some time. 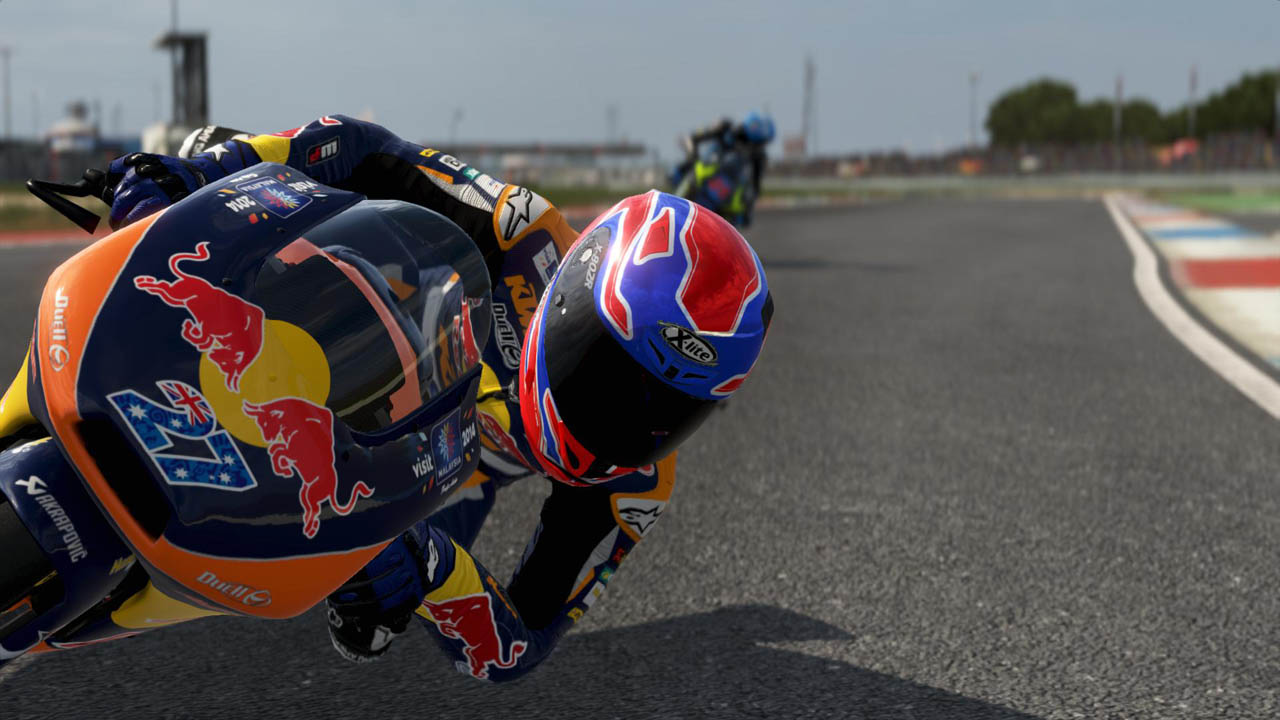 Individual races, Championships and Time Attacks are all well and good, but for me the most fun was had in the Career mode. Here I could customise my rider, get sponsor deals and earn upgrades for my bike. Also, starting with a modest bike enabled me to really get to grips with the game. Taking the time to do practice laps and have my engineer adjust the bike according to my feedback was a much gentler introduction to the game than just jumping on a superbike and hoping for the best.

MotoGP 15 is a hard taskmaster. It’s a game that doesn’t pull its punches. But mastering the game’s tough learning curve reveals an exciting racer that offers a sense of achievement way beyond what you get from a lead-footed racing car game. 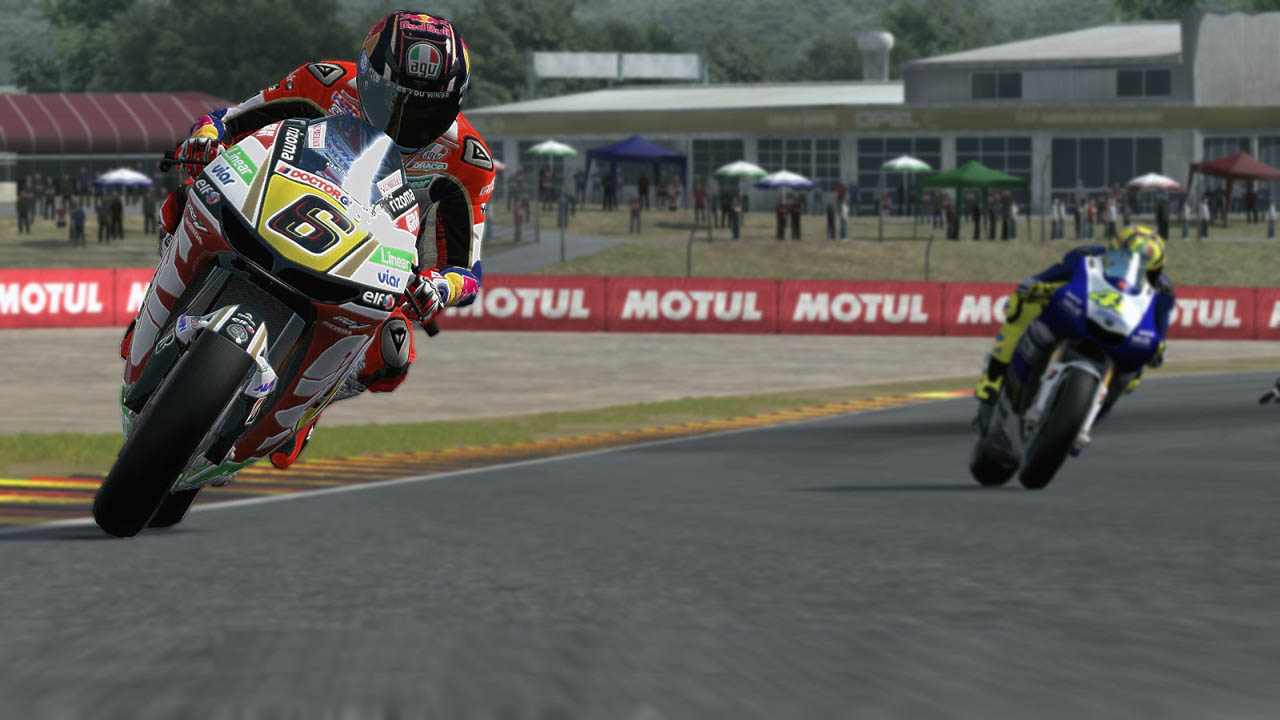 Milestone have been knocking out MotoGP games for years now and have pretty much got it down to a fine art.

The problem is that with their last motorcycle racing game, Ride, the developer was able to spread their wings a bit, away for the constraints of a licensed Championship, giving us more bikes, more customisation options and some more interesting circuits.

It seems that Milestone had a bit of fun with Ride, leaving MotoGP 15, in comparison, a very dry affair. By, quite rightly, catering to the MotoGP fans who expect authenticity, the game doesn’t have the same fun factor for casual players. 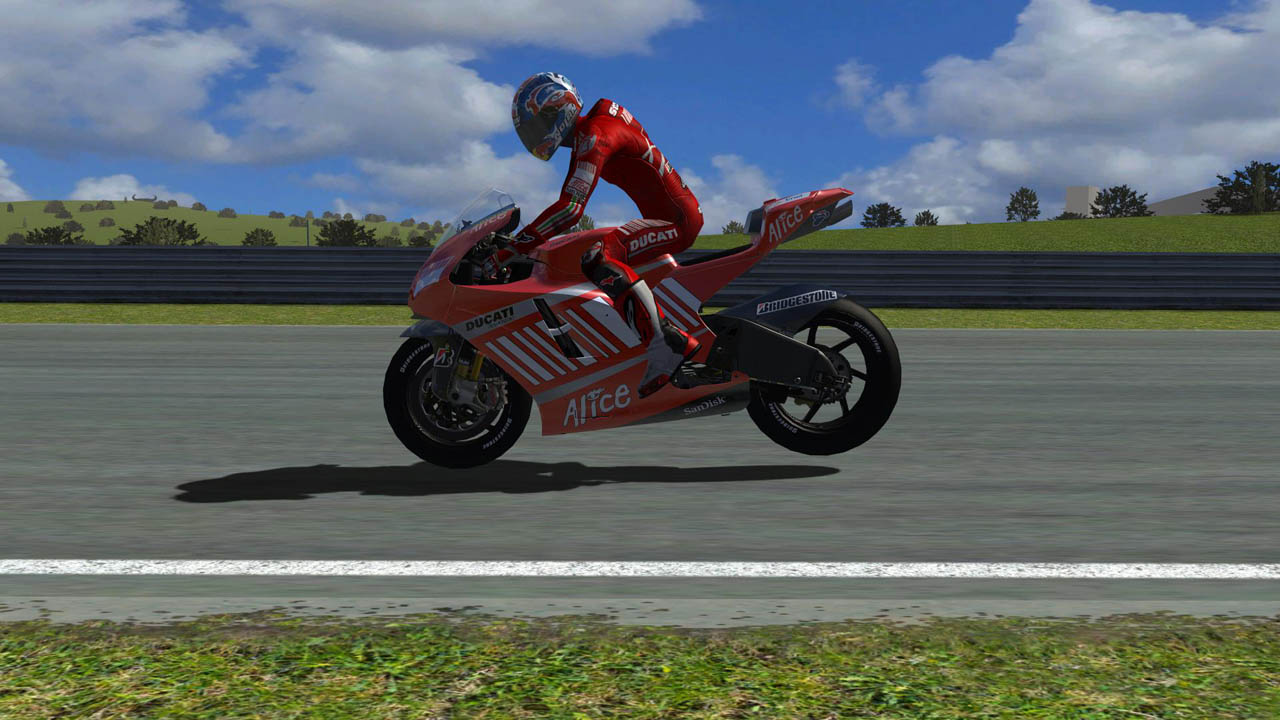 The visuals and presentation, whilst very good sometimes lack a bit of polish; a similar issue that I had with Milestone’s Ride. Whilst Moto GP 15 has plenty of game modes, it isn’t quite as accessible as Ride, being more of a game for the fan than players wanting a casual dalliance with motorcycle riding.

If you are a hugely into MotoGP, then this is the game for you. If not, get Ride instead.