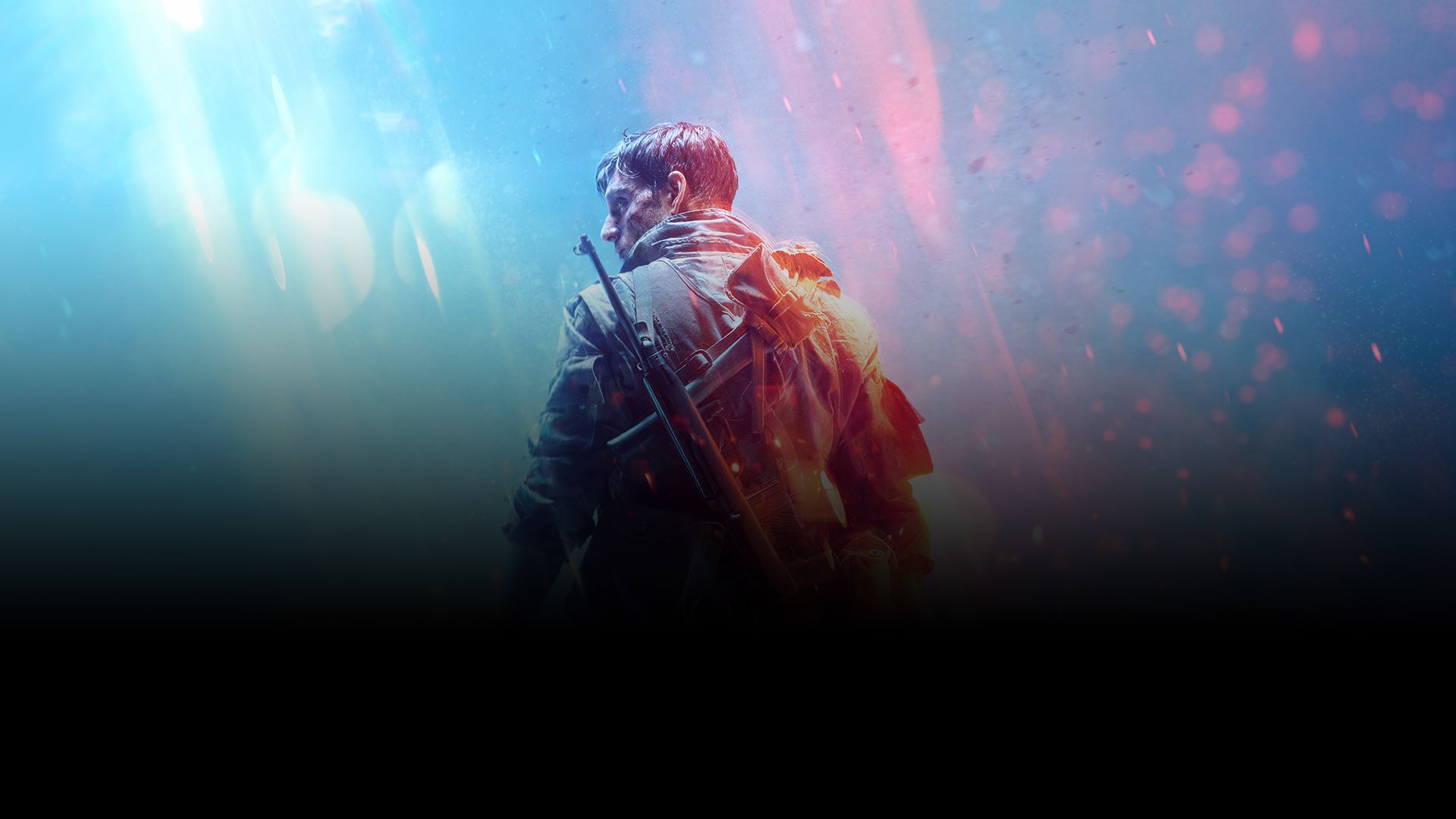 After fighting in the trenches, deserts and ruined villages of World War I in Battlefield I, two years later DICE have followed up with their big return to World War Two, Battlefield V. Now, though I’m not sure whether that’s Battlefield Five or Battlefield V (for Victory?), what I do know is that it is a bombastic return to the chaos of Battlefield games, though a return only half-delivered and half-complete, with large chunks of the full Battlefield experience still to be delivered as the games-as-a-service model fundamentally changes the way games are released.

Despite Call of Duty: Black Ops 4 ditching the single-player campaign, Battlefield V continues the set-up from Battlefield 1 in delivering short one to two hour vignettes from various conflicts around WW2, with a focus on those battles not traditionally seen in Western media and in the plethora of other WW2 first person shooters. At launch, there are three of these campaign missions (down from six in Battlefield 1), though an additional chapter, where you play as a Nazi tank captain, is coming after launch in December. These stories showcase some great writing and interesting characters. Graphically, they’re stunning too, with a mix of close in linear corridor-style areas and more wide open environments. Narratively, however, they don’t pack the same sort of punch as in Battlefield 1, which was unusually bold in challenging the glorification of war that these games typically promote. 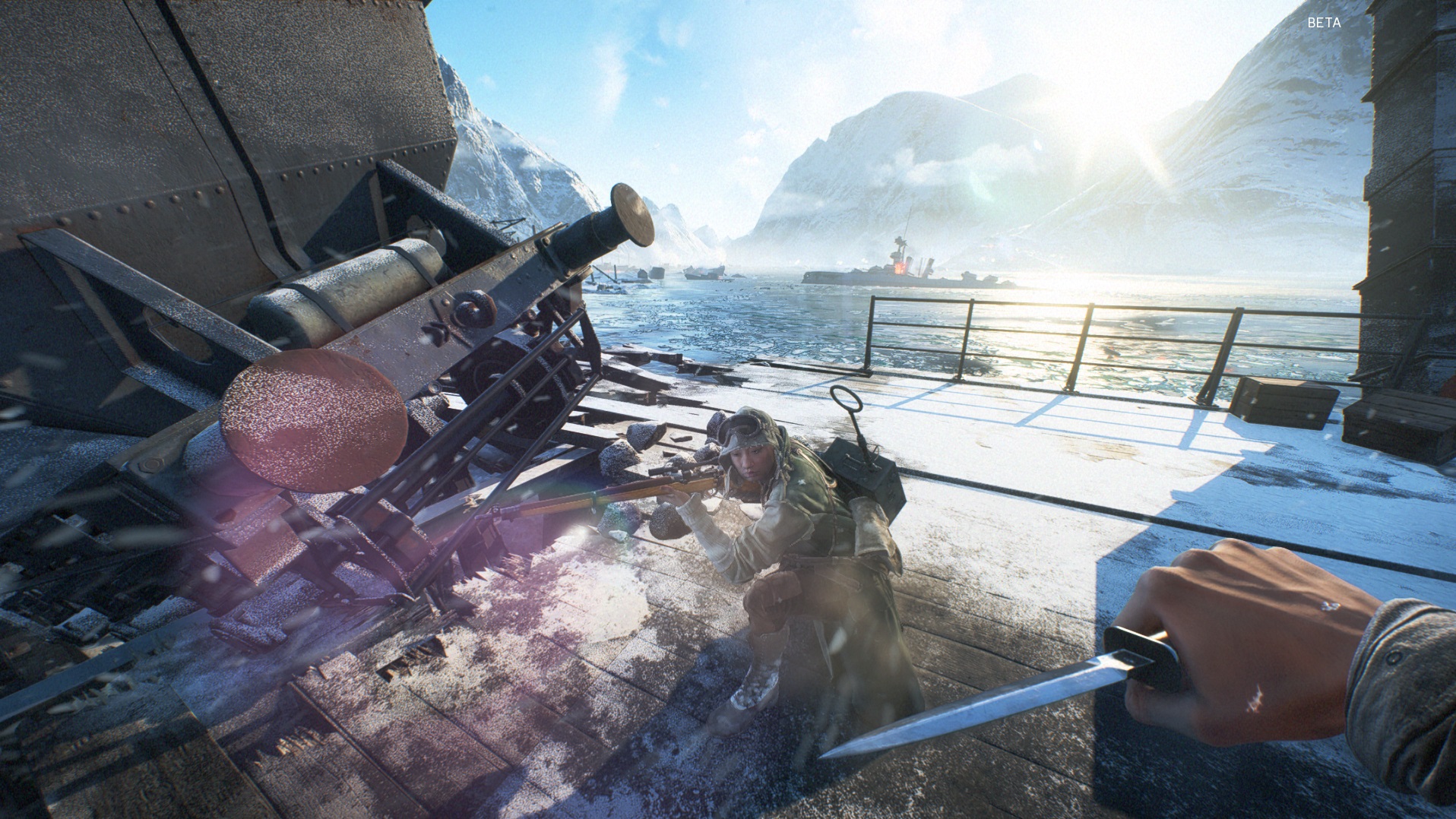 In terms of Level design they are,  unfortunately, let down due to an overreliance on stealth. Stealth missions aren’t what you usually associate with the Battlefield franchise, and for good reason. While the missions aren’t hard, they are definitely designed for sneaking around, which is totally contrary to how you’ll end up experiencing multiplayer and where the game’s mechanics and subsystems shine. Ultimately, they are a short entree to the main game that manages to tell interesting stories, but they don’t feel substantial, or even necessary in and of themselves.

The main course, as always with Battlefield, is the multiplayer, and Battlefield V is multiplayer Games-as-a-Service at its biggest and boldest. The game that we’re playing now, with the content, balance issues, maps and even whole modes won’t be the full game. This game is “incomplete” as it stands now, with a full roadmap of content planned by developers DICE. For example, there are only a slim selections of maps in the game at present, with more to come as free downloadable content. Whole areas of the interface are “coming soon”, and though the game was delayed a month, development on it clearly isn’t yet done, but instead content will be coming free to the game over the next year. 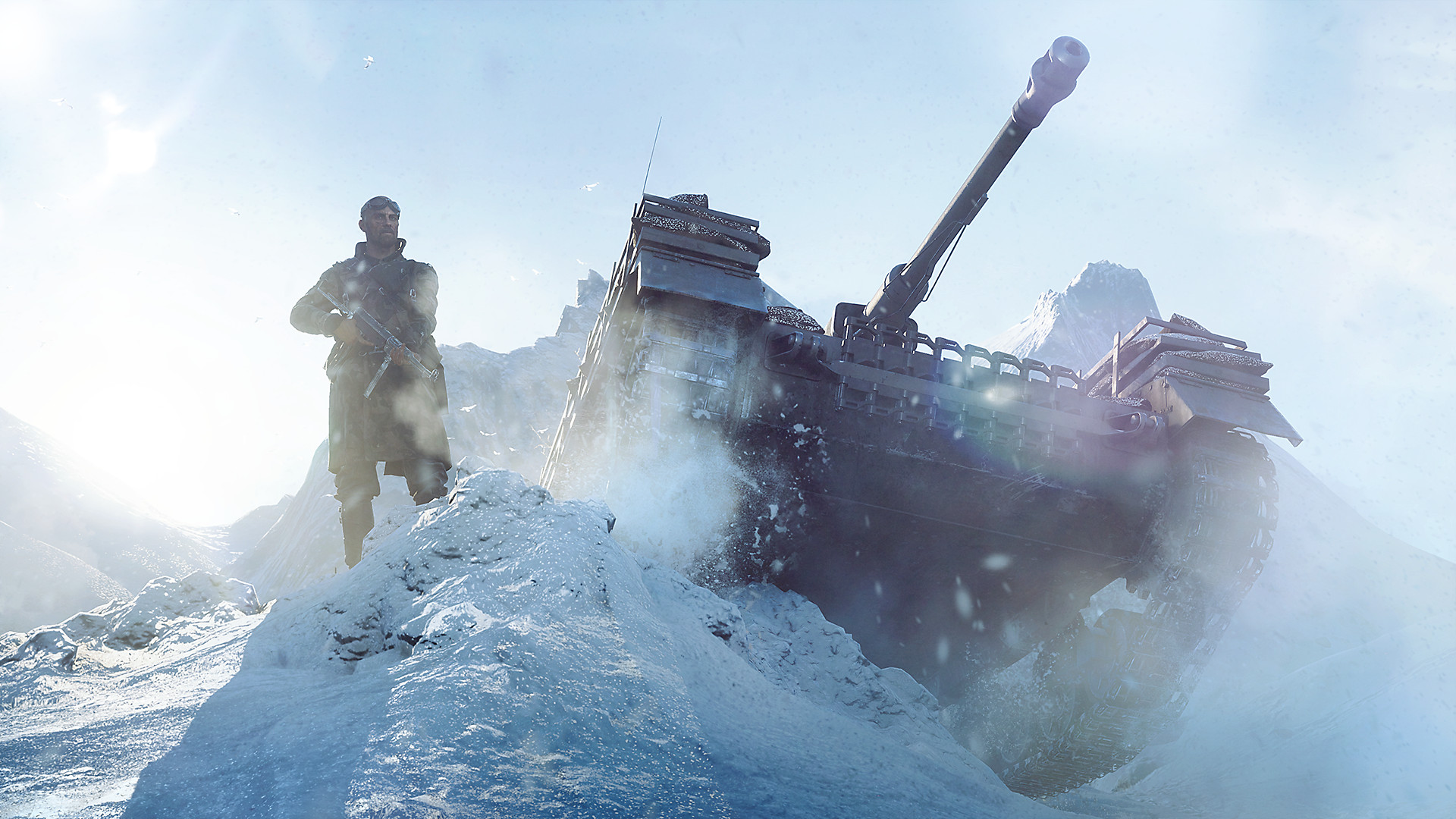 EA has finally learnt from Star Wars Battlefield and Battlefield 1, where paid map packs unnecessarily split the player base and in Battlefield 1’s case, lead to EA releasing the season pass free for the last few months of the game’s life. This also ties in nicely with the addition of Battlefield V to Origin Premier, EA’s subscription service, where you don’t pay just once for the game, but a relatively low cost for however long you’d like.

Beyond the standard additions of maps, modes and balance and bug fixes, there’s an entire Battle Royale mode coming next year, but we don’t even know many details about it yet. It’s a bit of a strange situation, but at least there is plenty enough content in the here and now without the Battle Royale, and there is assurance that any expansions won’t be released as paid DLC. 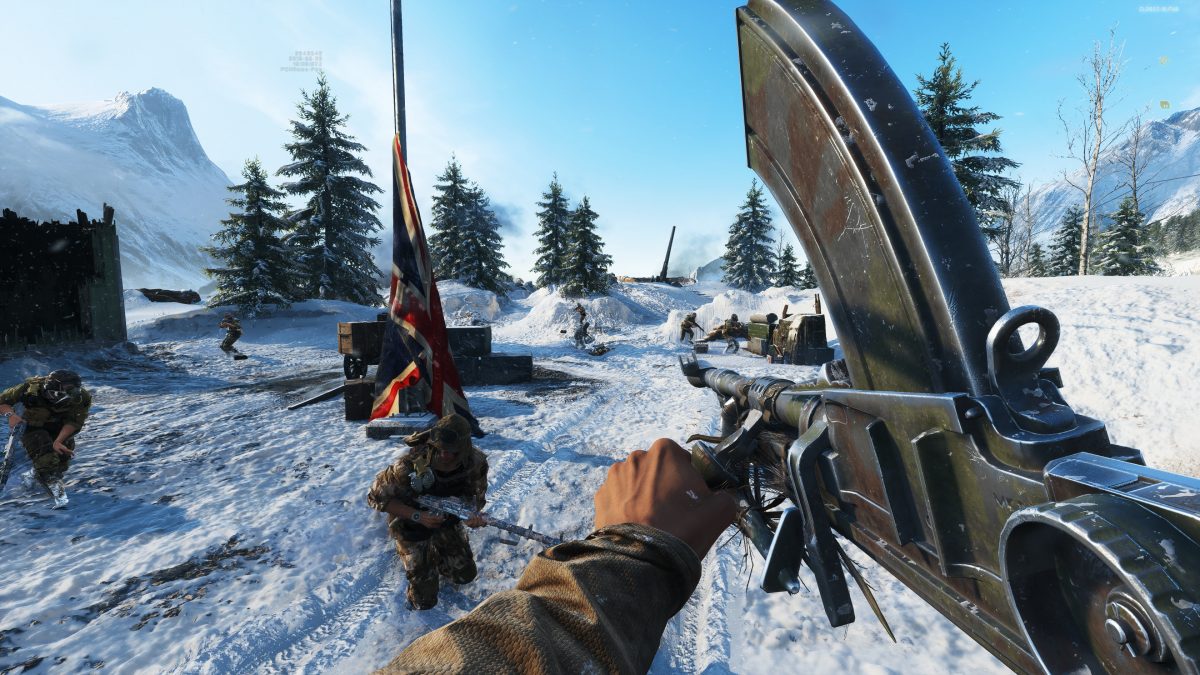 Overall, Battlefield V looks fantastic – the Frostbite engine which powers Battlefield V has already proven itself in games as different as FIFA, the Star Wars Battlefront games and even in Mass Effect: Andromeda, which could undoubtedly be beautiful despite its other shortcomings. And that Battlefield V targets 60FPS on consoles, with complicated weather effects and building destructibility is a testament to the scalability and flexibility of the engine. Now, on base consoles you are likely to experience slowdown, especially in busy scenes. Unfortunately this does make it more difficult to play, especially when the enhanced consoles aren’t having the same issues. Xbox One X support is solid though and the game looks amazing on a 4K screen.

After playing FPSs on the PC for awhile it took me some time to readjust to controller input, just in time for Microsoft to announce and release keyboard and mouse support for the game. There’s no word about support in Battlefield V, but I can only hope all FPS games will soon gain this option – even if it relegates keyboard and mouse users to separate matchmaking. 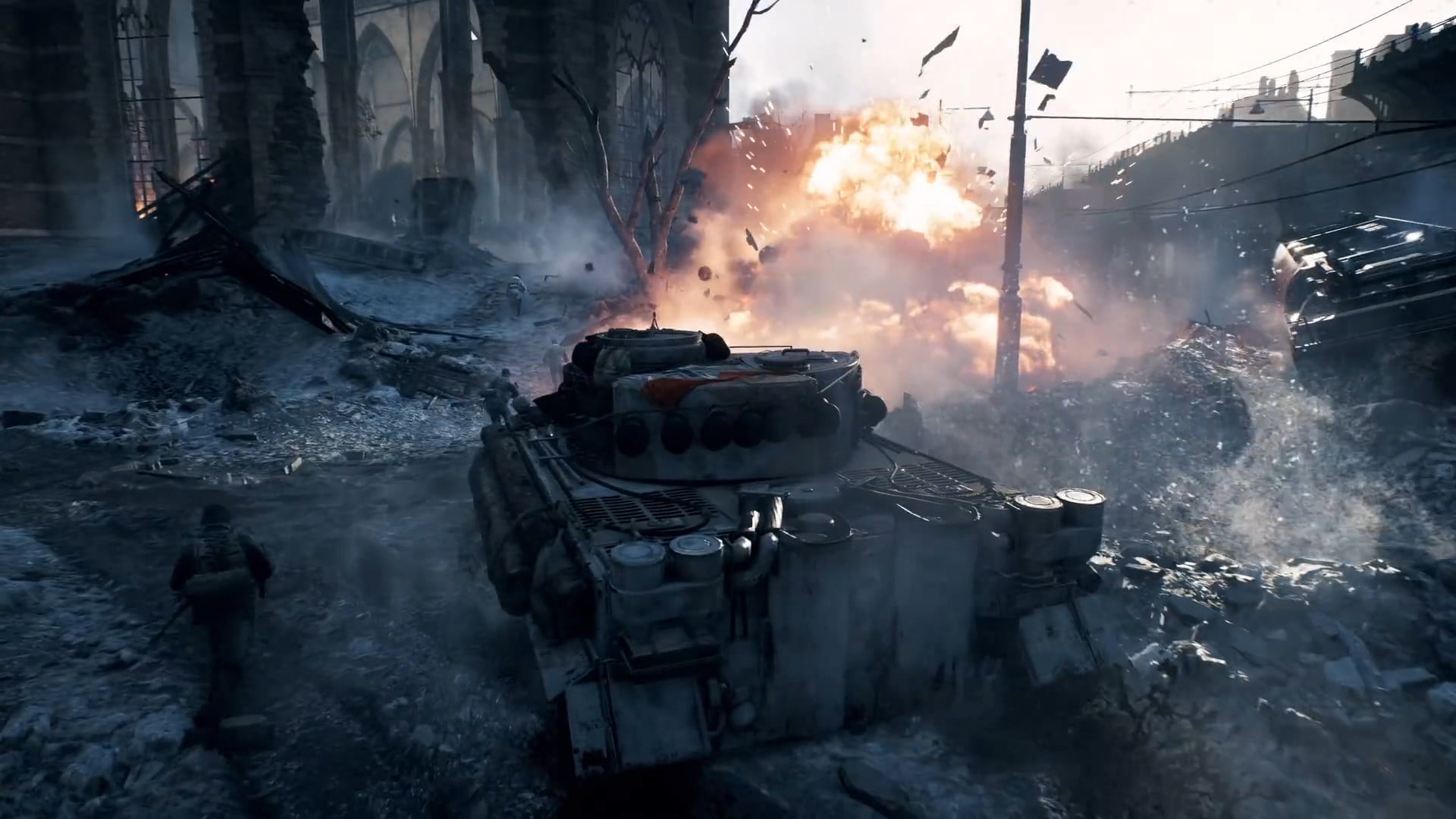 But in terms of how the multiplayer itself feels, Battlefield V will feel very familiar to anyone who has picked up Battlefield 1. Recoil is realistic – just spraying and praying won’t get you very far at all. Teamwork and team play is key – lone wolfing won’t get you far either in Battlefield V. Squad leaders now have more options available to them, and if you don’t feel your squad leader is up to the task then you can at times “mutiny” and strip the squad leader of their position. There has been some concern since Battlefield V about the relatively short time to kill, and developers DICE are looking at ways to address that issue, a task I feel will have to be carefully balanced between helping teams survive without encouraging too much lone wolf style gameplay.

Battlefield V is the perfect logical successor to Battlefield 1. It feels like a close cousin of its WWI predecessor, with stories, mechanics and gunplay that is remarkably similar, but just one more notch refined. Graphically its stunning, and on PC it is one of the very first titles to support ray-tracing on NVIDIA’s RTX line of high-end GPUs, which delivers fantastic image quality not seen in a shipping commercial AAA game.

And while it doesn’t reinvent the wheel otherwise, no-one should feel any compulsion to stay on Battlefield 1. Battlefield V takes what was best from that game, and with the help of a total commitment to the games-as-a-service model will only deliver more as the year goes on. I’m curious to try the Battle Royale mode, and will welcome the addition of more single-player campaign stories to the relatively meagre selection that comes with the game today.

Battlefield Victory would, it seems, be the correct name after all.