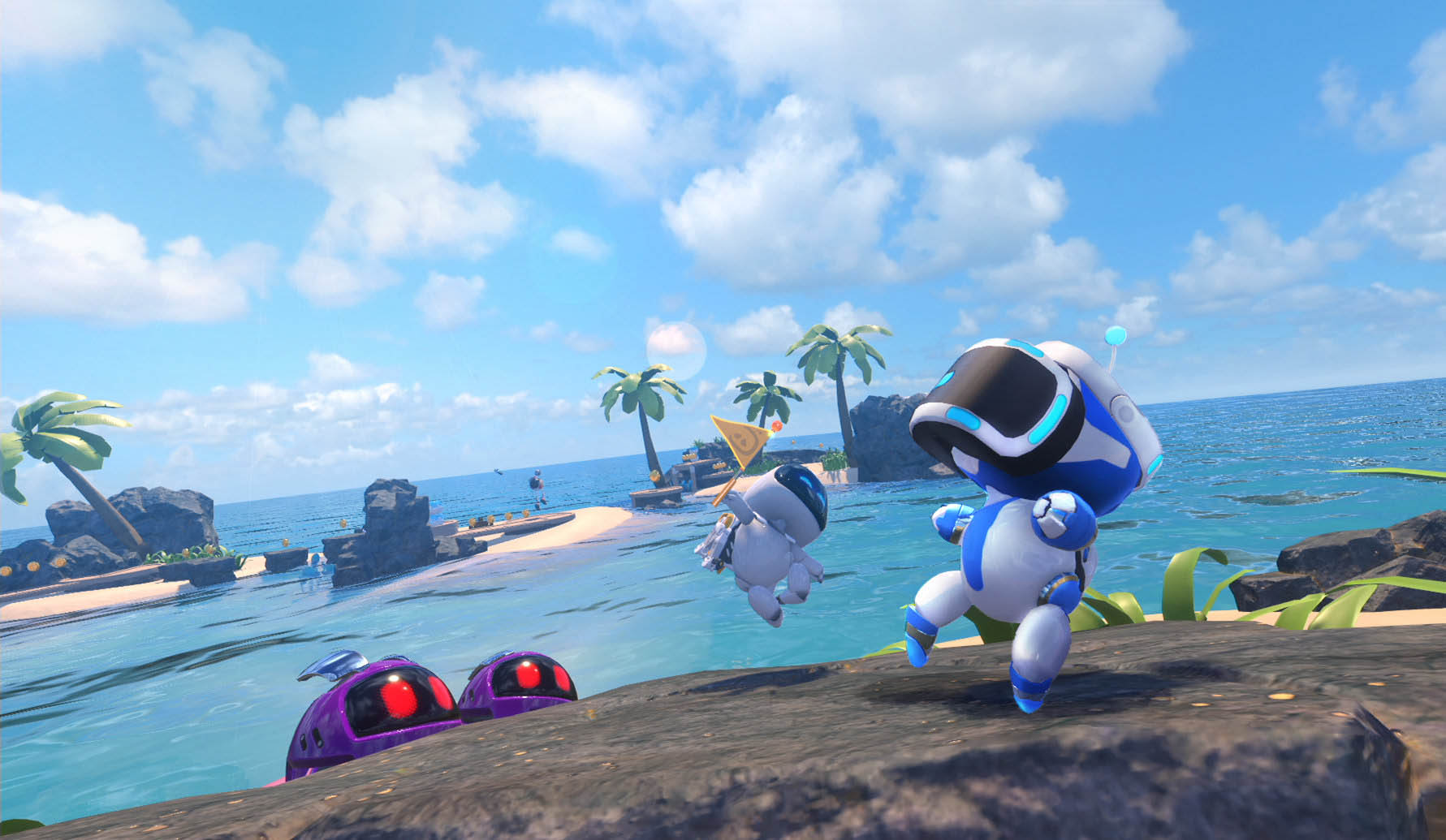 Astro Bot Rescue Mission is one of Sony’s first fully fledged campaign titles built from the ground up for Sony’s VR platform by Japan Studios (of The Last Guardian fame). And it’s just great.

Astro Bot’s genesis was from the Playroom VR “mingame” collection – developed and provided as a free download from the PS Store. Proving to be a neat showpiece for VR, there was apparently a huge appeal from fans to have a full game developed from this 15 minute sampler, of which Japan Studios took heed. 2 Years later – here we are. 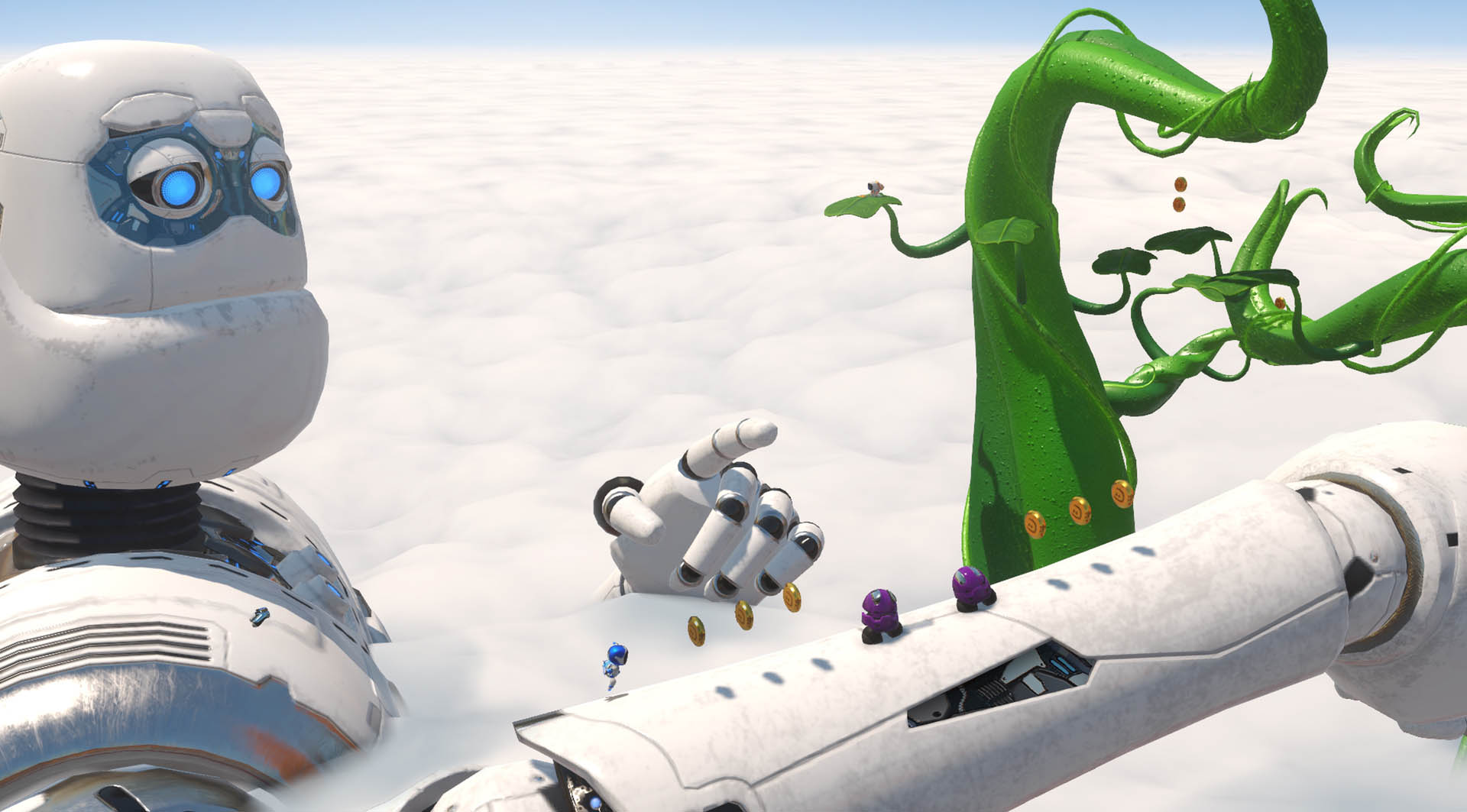 On paper, the game sounds like a nostalgic retread of point to point linear platformers that permeated the 90’s gaming landscape. And on paper, that’s essentially what it is. But what VR brings to the table here breathes life back into an otherwise trite and innocuous genre, and then injects it with pure dopamine.

The story is, well, who cares. You control Astro, a diminutive robot on a quest to vanquish the cutesy robot scum of the Universe, to rescue his buds from captivity, and to repair his ship. It’s a thread designed purely to keep the game bouncing gleefully from one vibrant location to another. It’s a constant assault of charm!

There are 5 worlds, each with 4 Levels and one enormous end of world Boss. The worlds are incredibly beautiful and varied, often including simple, but unique gameplay mechanics to keep the platforming interesting and fresh. These worlds include construction sites, lush forests, dimly lit caves, underwater areas – to name a few 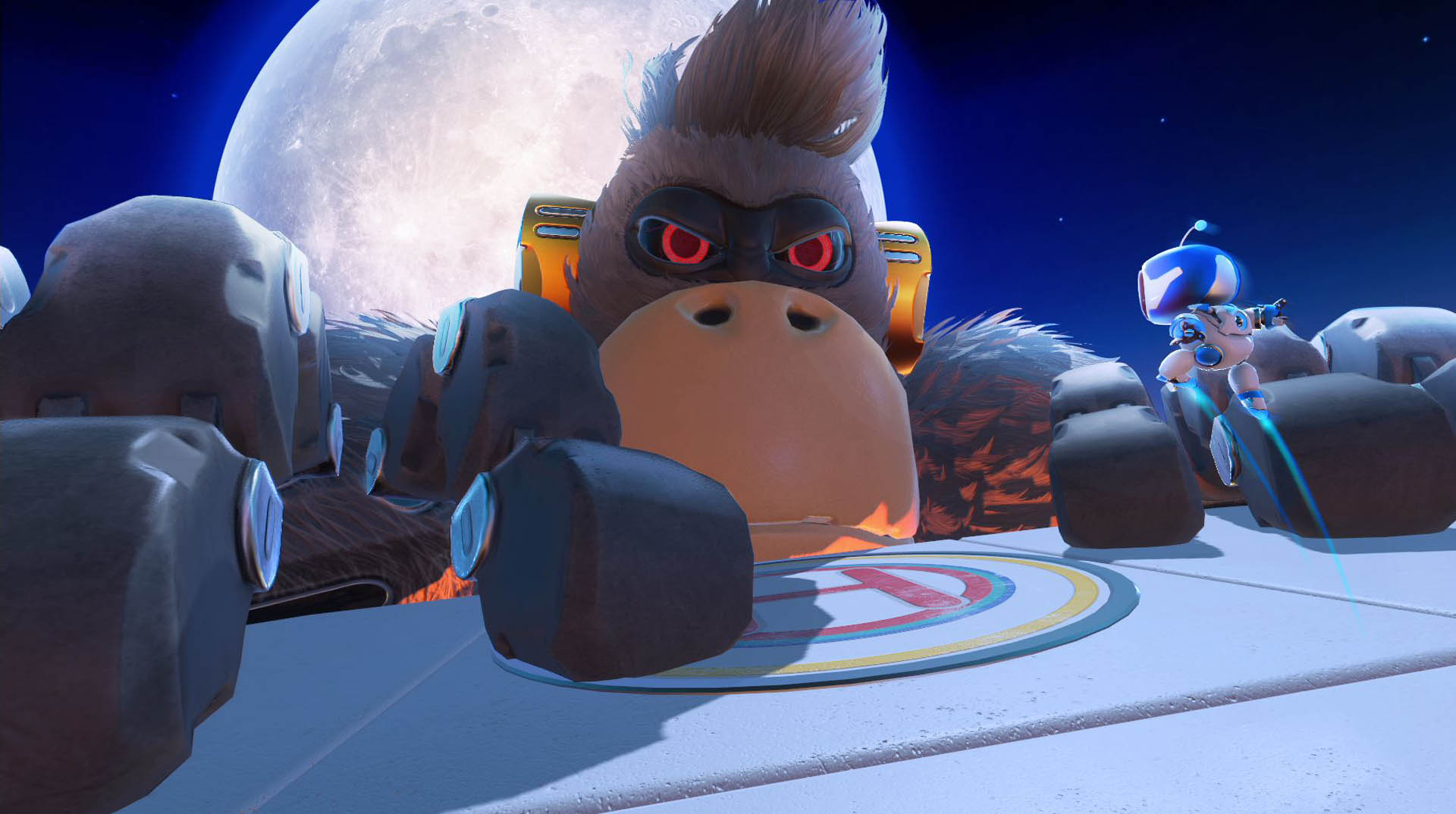 Your perspective is through the eyes of another robot character, that hovers at a fixed height tracking Astro through the world as he makes his way forward. You can look around nooks, crannies and corners, peer down at hidden locations, and peer up at bridges and girder pathways for Astro to explore. It feels like you are always in the center of an elaborate Meccano construction as you try and determine how to best puppet Astro around.

As a satisfying genre trope, Astro collects spinning coins, while defeating enemies and breaking objects also gives you coins. These can be used for purchasing unlockables (achieved through a “claw machine” chance minigame). It’s not much of a motivator, nor particularly exciting compared to the main game, but offers some more variety and it’s definitely more interesting than a items catalogue.

Astro Bot screams high production value. Not only is everything impeccably polished and pretty, but the animations, sound, physics, water and particle effects are all very accomplished in a game that wouldn’t necessarily have drawn that level of scrutiny from its players. Japan Studios have really teased things right into the corners, which has become a running theme for Sony’s first party studios in recent history. They have an obvious mastery of the technology and are able to glean from it a level of fidelity that’s rare elsewhere on the platform. 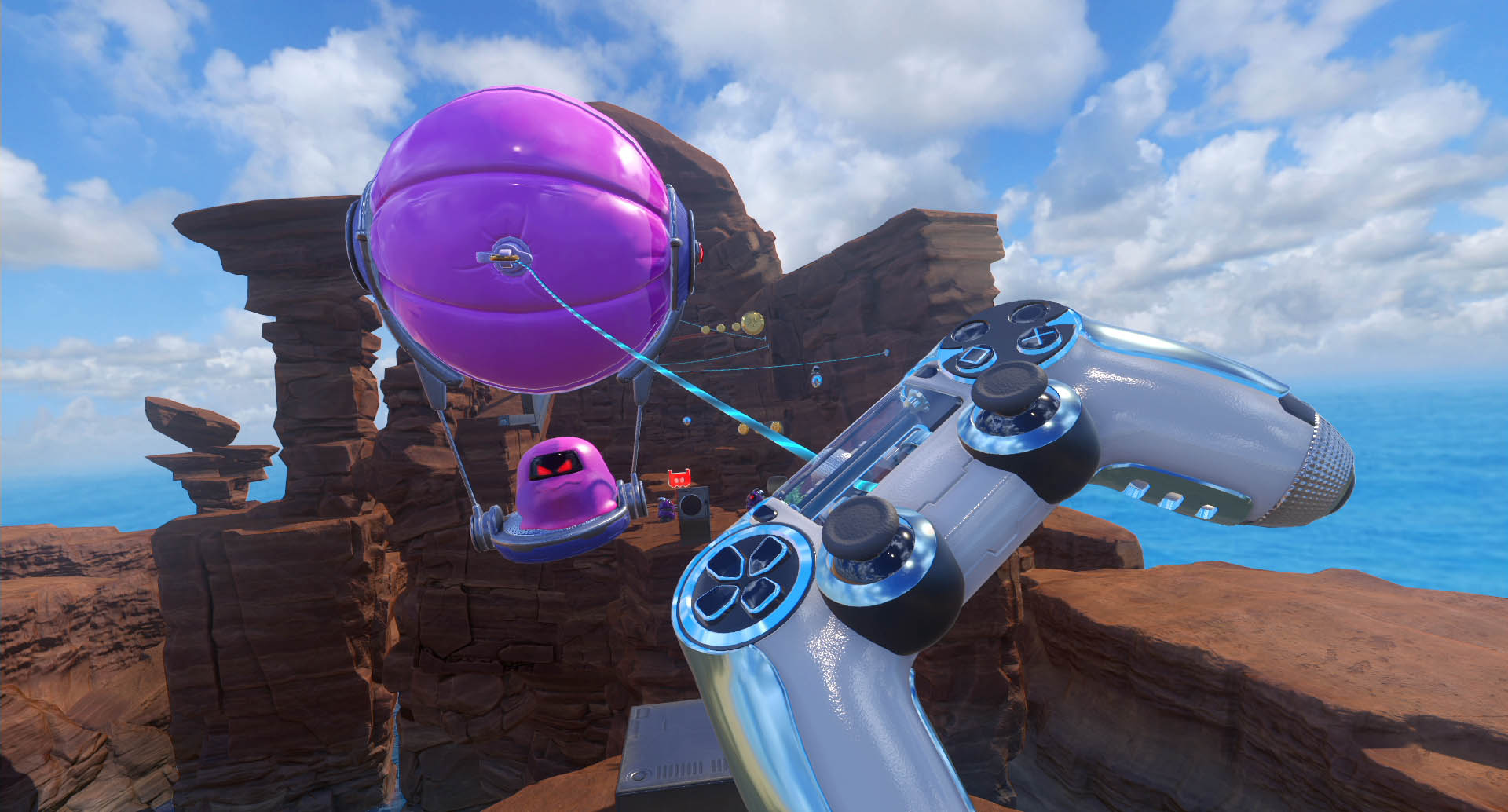 All this level of detail and care only adds to the immersion in VR.

Astro Bot is a dualshock only game. But the dualshock is used in ever clever ways, enabling players to interact with the world not just through their control of Astro, but with the world itself. Certain Levels require gadget attachments which augment the digitally rendered in-game version of the controller. These include a grappling hook for creating tightropes and pulling down barriers, a water cannon for growing plants and dowsing flames, and even shuriken for firing into walls to aid in Astros platforming. These actions are performed by the often neglected “touch” pad on the controller and are all very fun to perform, adding some required dexterity to the controls.

The player must also interact directly with objects at certain points, such as “headbutting” obstructions as the camera tracks forward, or headbutting projectiles back at enemies. A couple of instances will have the player using the headset microphone in interesting ways – however gimmicky, it’s a neat touch. 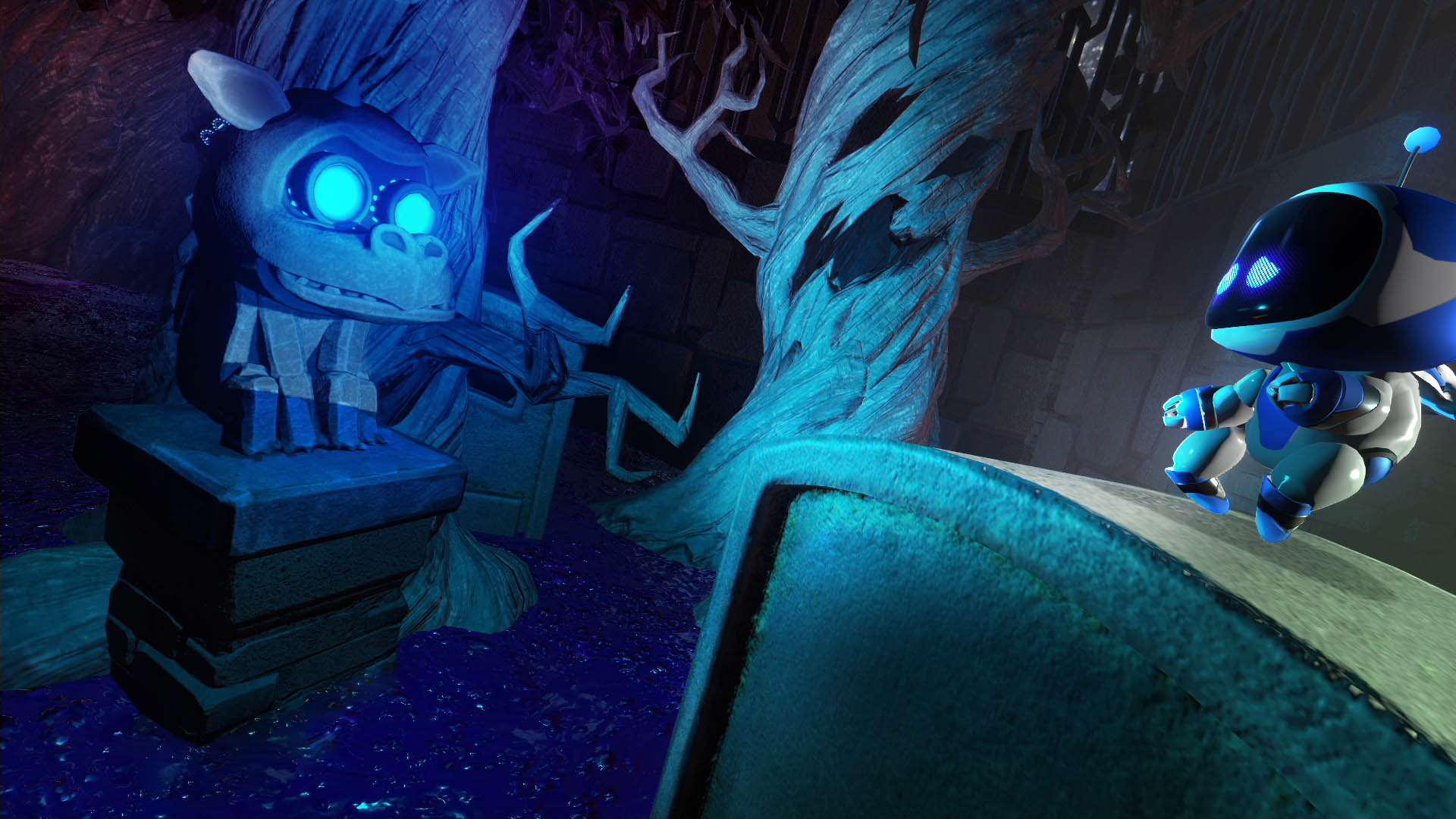 The music contains fun, plucky riffs you would expect from a modern Sonic or Mario title, and although they do repeat, perfectly compliment the charm of the aesthetics throughout. 360 audio is also put perfectly to use, with the “help me” chirps of your fellow bots awaiting rescue indicating their location from all around, and other diegetic sounds filling out the environments with enormous personality.

Combat in the game is barely that, with 3 attack types relegated to specific enemies that are mostly variants of the same basic skin. But that’s perfect for this type of game, where combat is more an extension of the platforming mechanic, requiring timing and precision rather than brute force. Most enemies can be killed with one hit. It’s cute, it’s charming and at times, kinda funny.

Then there are the Bosses. On a flat screen, these would seem pedestrian but unassumingly fun. In VR, they are enormous and epic in scale, dwarfing both the player an Astro himself. This sense of scale gives the pattern-based attacks a tense anticipation. They are some of the game’s highlights for sure. 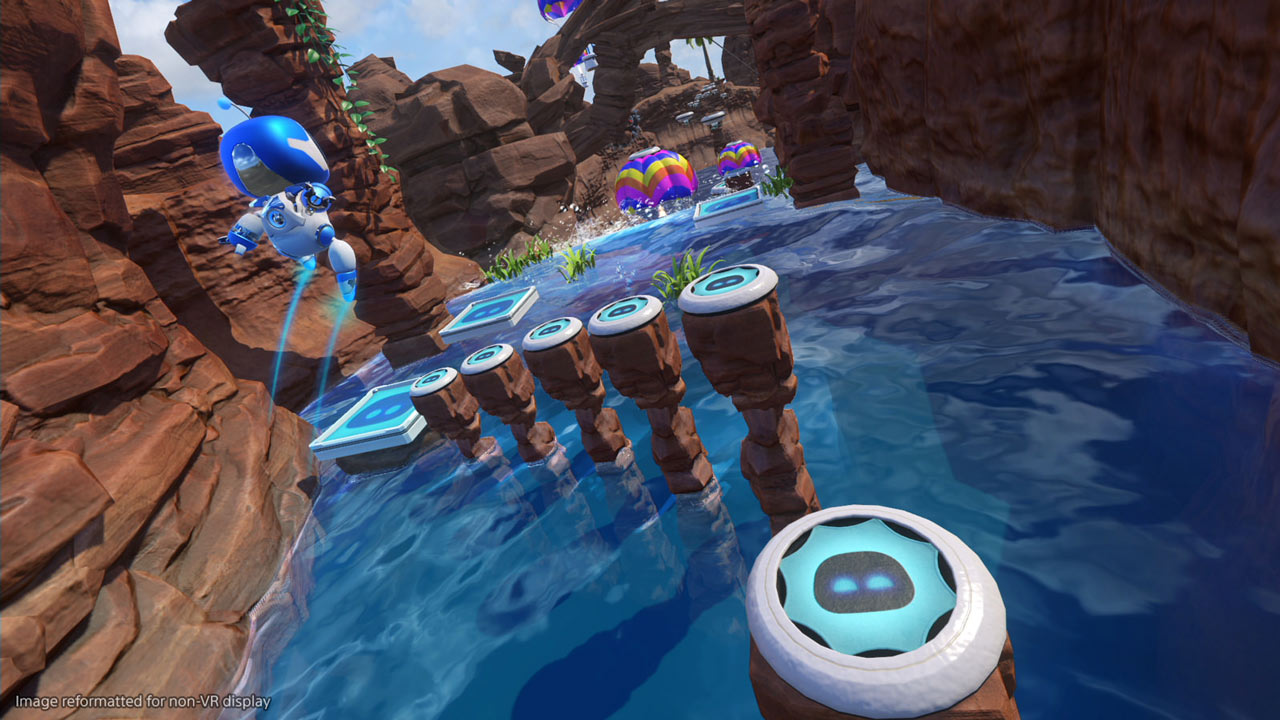 Astro Bot’s campaign clocks in at around 8-10 hours if you’re not just zipping through the Levels, but if you manage to find a hidden chameleon camouflaged into the environment of each Level, an independent challenge Level is unlocked afterwards for you to attempt.

If Firewall Zero Hour is PSVR’s answer to multiplayer – Astro Bot Rescue Mission is its answer to single player. This game is so fun and accessible it will likely sell PSVR units, it’s just that good.

Also – Astro does “The Carlton” as a victory dance. Get it, play it, and you can thank me later. 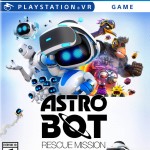