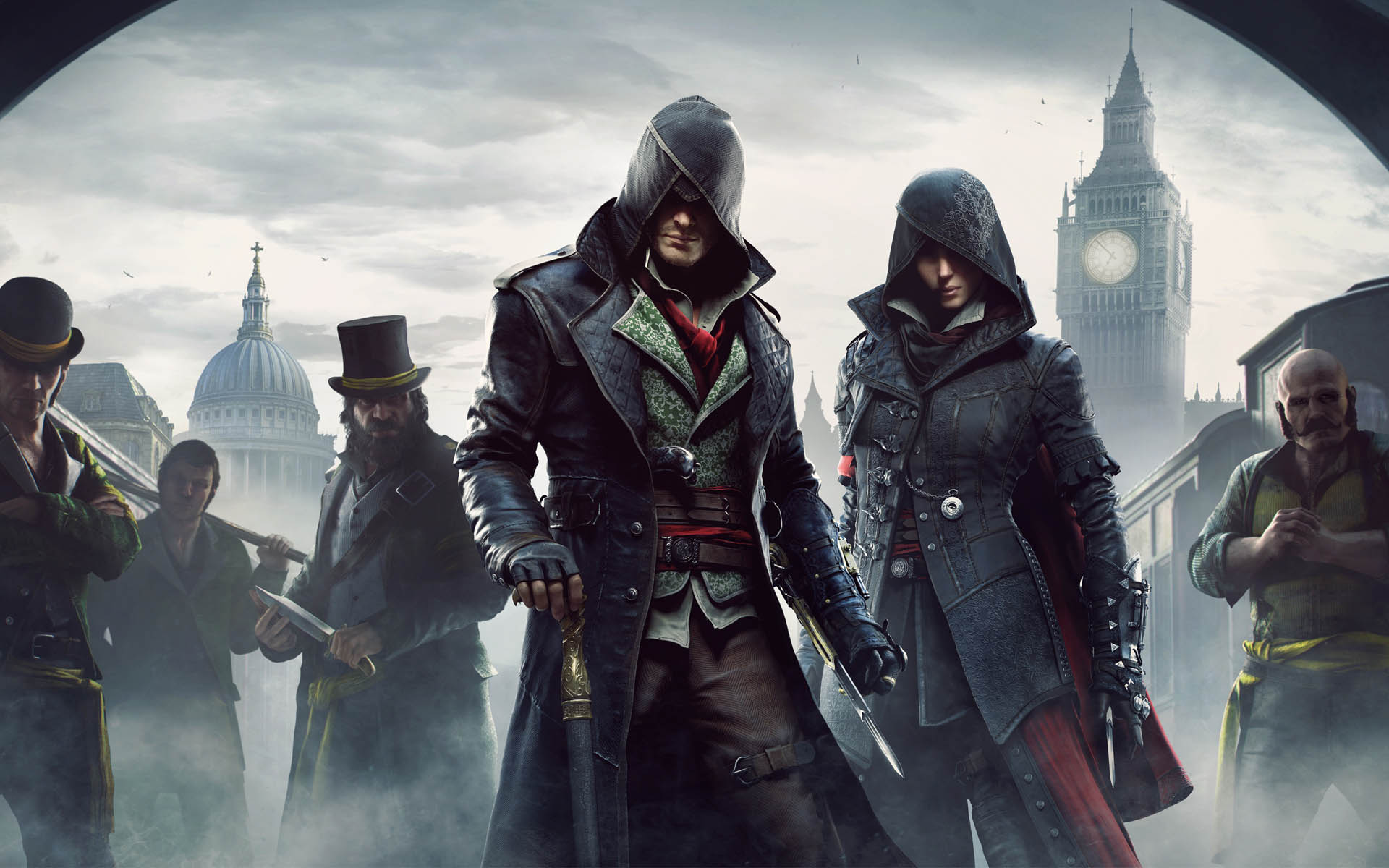 Assassin’s Creed Syndicate propels Ubisoft’s flagship franchise from last year’s revolutionary Paris setting, across The Channel to London, England at the dawn of the Industrial Revolution. After the game’s initial release on new-gen consoles, it’s now out on PC. Shane the Gamer’s Darren Price checks it out.

Last year was a tough year for Ubisoft. Broken at launch, Assassin’s Creed Unity upset many fans. To be fair, the series was a victim of its own success, the pirate-themed, Assassin’s Creed IV: Black Flag being a such a tough act to follow and its protagonist far too much fun for the comparatively dour Arno to successfully replace.

I was too busy with Assassin’s Creed Rogue, last year, to experience the launch issues faced by Unity. By the time I’d got to the game, it had been pretty much fixed. Save for some awkward changes to the game’s locomotion, changes that persist in Syndicate, I found Assassin’s Creed Unity very entertaining.

But on to the most recent Assassin’s Creed Syndicate and, more specifically, the recently released PC version. 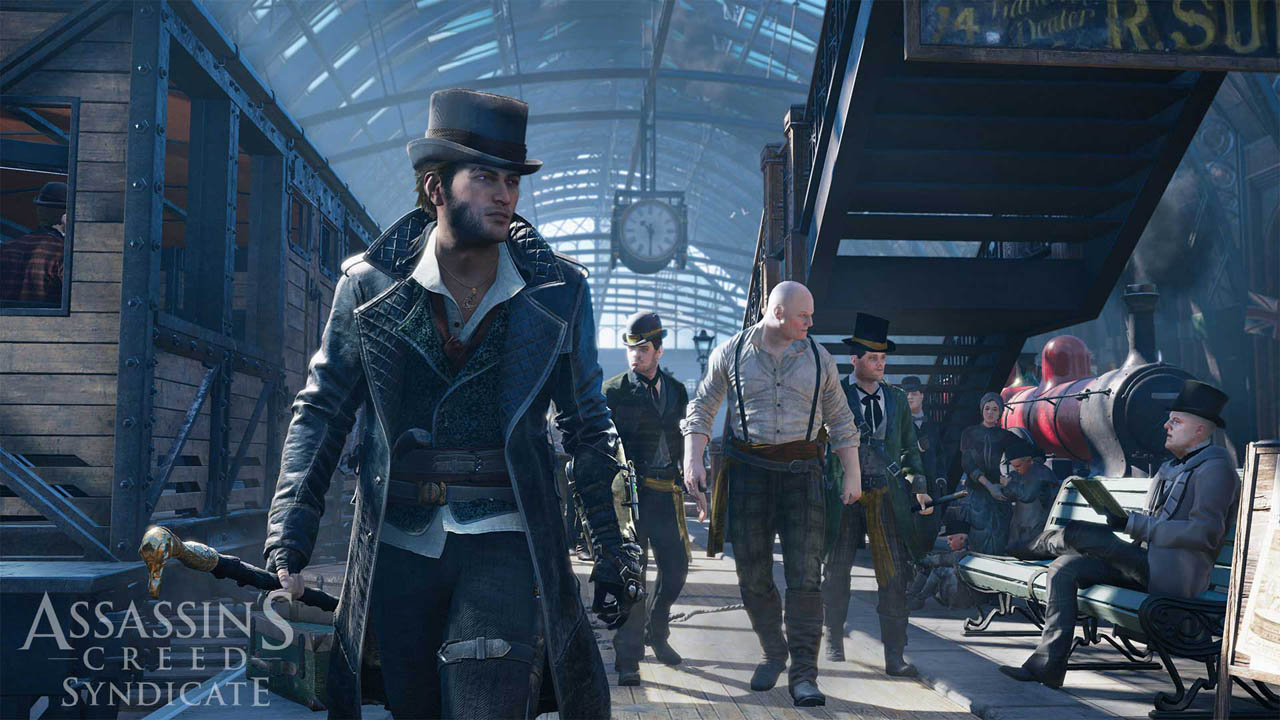 I’m reviewing Assassin’s Creed Syndicate on a monster PC set-up. As with most PCs, it’s a bit of a coin toss as to whether recently released games will play well on it without a bit of tweaking. The review PC is an i7-based machine with a CPU running at 3.6Ghz, 32 GB of memory and two nVIDIA GTX980s powering three 1920×1080 monitors.To Ubisoft’s credit, the PC version of Assassin’s Creed Syndicate not only ran without a hitch, it was also very happy to use all three screens.

The setting of London, England, at the dawn of the industrial revolution marks the series’ first comparatively modern-day setting. Whilst we have come a long way since the Victorian England of one hundred years ago, this is no medieval setting, with manual labour and horse-power giving way to technological marvels like the stream locomotive.

Access to new technology has opened up new avenues for the Templars to use to exploit the arcane secrets of the pieces of Eden- ancientartefacts that have the ability to grant the welder unfathomable power.

Ticking the diversity boxes, Ubisoft allows players to take control of twin Assassin’s Jacob and Evie Fry as they attempt to remove the Templar scourge from old London town borough by borough.

Jacob’s cock-sure attitude makes him one of the least appealing protagonists in the series. Even Evie, who seems to have a more sensible head on her, lacks some of the charisma required of a leading lady. 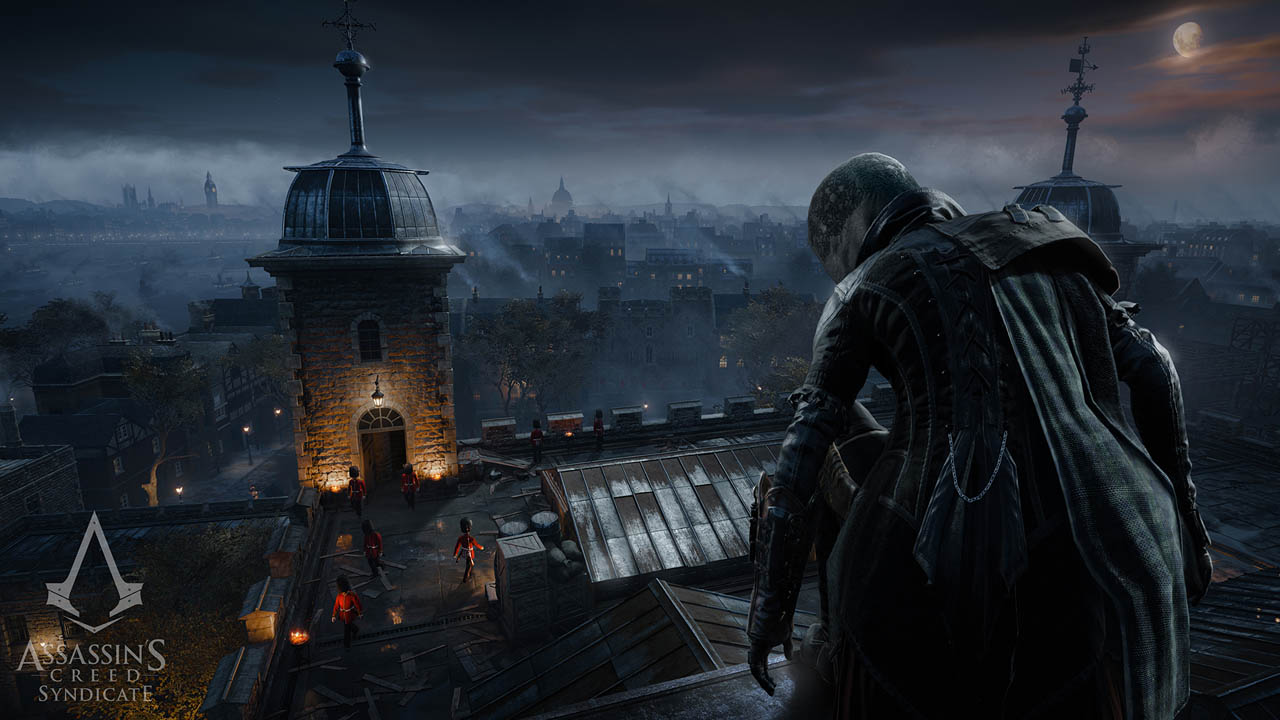 The twins base of operations is a train that is continuously in motion. Its stops at stations, for reasons unknown, but continues, unabated, as it wormsits way around London. It also seems, curiously, to be the only train running on London’s vast rail network.

As the series puts the historical settings behind it, I can’t help but feel that it is losing its edge. Also, instead of a coherent experience we a getting a melting pot of ideas that could do with a lot more editorial guidance than the end result suggests that it got during development.

Just as they did with Paris, Victorian London has been expertly recreated for the game. Landmarks such as St. Paul’s Cathedral and the tower housing Big Ben at Palace of Westminster are immediately recognisable.The game’s graphical fidelity and the meticulous attention to detail that has gone into recreating London is impressive, but I didn’t really find it as exciting as my previous adventures in Renaissance Italy, Constantinople or in the New World. Perhaps, it’s because London is too familiar to me to feel as exotic as the other Assassin’s Creed settings. 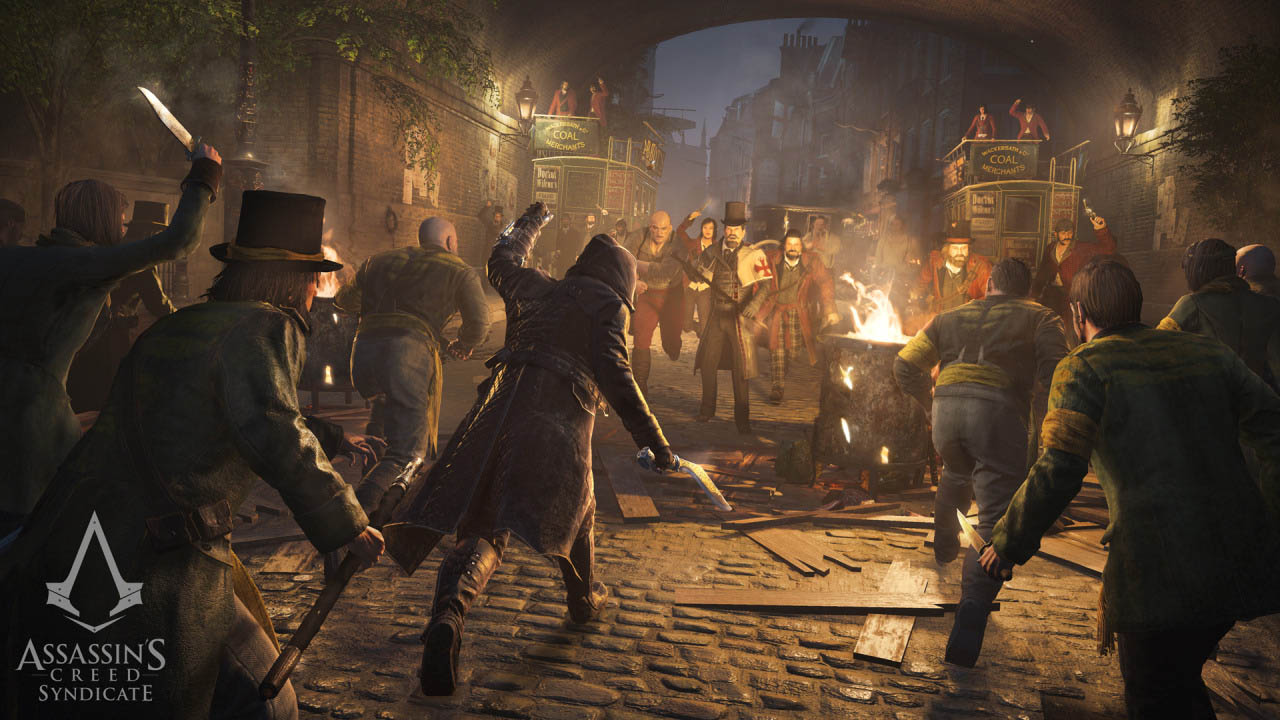 Still, there is a breath-taking amount to detail in this digital representation of London. From the ornate streetlamps to the re-purposed cannon lining the streets as bollards, the city feels so real.

The lack of horses in Unity’s revolutionary Paris always puzzled me. Ubisoft’s 19th Century London is, as you’d expect, full of cart horses, carriages and horse-drawn omnibuses. The city is absolutely bustling, especially on the PC, with the populous visible right off into the distance, just going about their business.

The parkour element of the Assassin’s Creed games ceased to be a major gameplay element for me years ago. I found last year’s Paris a bit dull and often no more than an obstruction getting in the way of the mission objectives. Thankfully, Jacob and Evie both have a Batman-style grapple for quickly getting to the rooftops and for traversing from building to building. This makes the assassins’ rooftop antics much more interesting and exciting, as well as making getting from A to B a lot quicker. 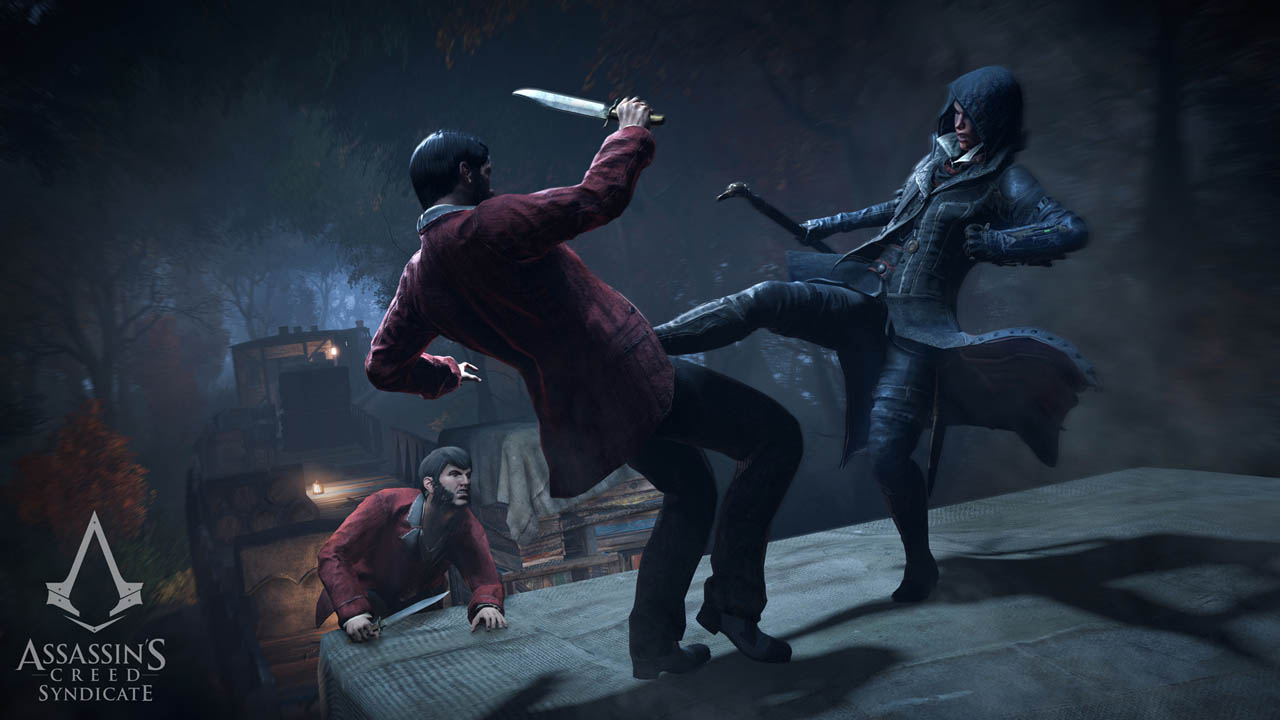 Curiously, for this entry, it’s actually less about the centuries-old Assassin’s verses the Templars and more about the Rooks verses the Blighters, two gangs waging a, sort of, proxy war on behalf of the former. It’s a bit odd to tell you the truth, further diluting a mythology that seems to be losing its edge with each game.

The PC version of Assassin’s Creed Syndicateis most definitely the definitive version of the game. Whilst I did have a couple of crashes to desktop during my review playthough, I lost nothing. The ease at which the game was able to cope with three monitors was pleasant surprise.

With 5880 x 1080 (bezel corrected) nVIDIA Surround, I’d say that I was running the game at 60 fps with some gorgeous looking visuals. At 1920 x 1080 I was getting the same, but able to add TXAA4 to the FXAA anti-aliasing solution and realistic PCSS shadows. With these settings you are getting graphics that you’d almost swear were a window into Victorian England.

Whilst Assassin’s Creed Syndicate is a bit of repeat of previous titles in series, the game’s visual fidelity – especially on PC, polish and classy presentation most definitely make the game shine. The protagonists still exist in the shadow of Black Flag’s Edward Kenway, but that shouldn’t be surprising.

Still, the story works and is a definite improvement on last year’s Unity.  But it’s really the richly detailed re-creation of the City of London that is the true star of the game, which is absolutely breath-taking on PC.