Super Meat Boy: Rival Rush is a one versus one nonstop fast paced no holds barred finger blistering every card for themselves showdown where only the swiftest and smartest survive. It will include cards for all your favorite Meat Boy characters, like Dr. Fetus, Bandage Girl, and of course, Meat Boy himself. There’s some new characters too…

Super Meat Boy: Rival Rush will make its debut at PAX West from August 31st – September 3rd, 2018. Located in the Washington State Convention Center, a demo area will be available where players can learn Rival Rush, and full decks will be available for purchase at the show for $10 USD. As an added bonus, PAX attendees who stop by the booth will be given a free limited edition card as a token of Team Meat’s gratitude. 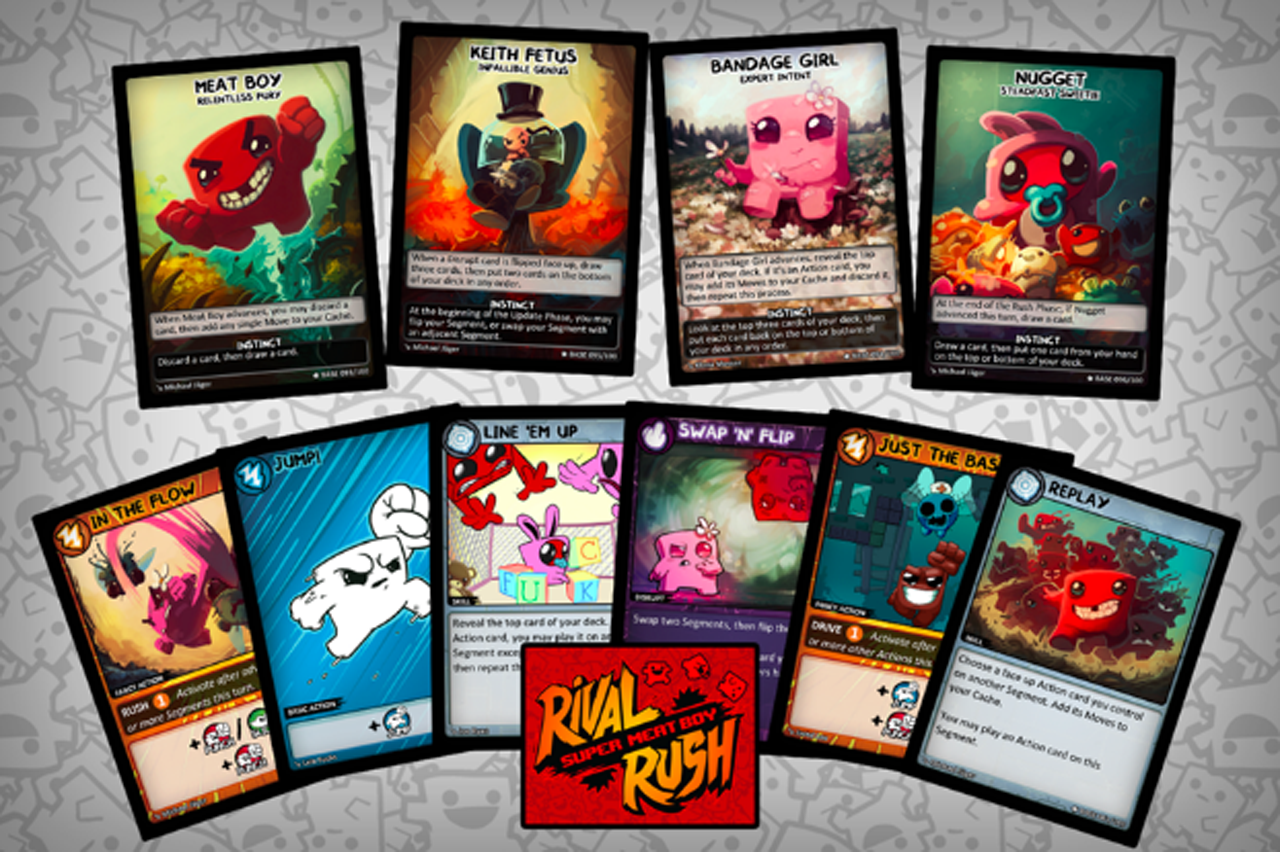 “Kyle was over at my house for my birthday and we jokingly said ‘We should do a Meat Boy CCG for PAX’” said Team Meat co-founder and director Tommy Refenes. “It was a good laugh until we whipped out the index cards and actually built a Meat Boy CCG. Happy Birthday to us all!”

“There’s a special place in our hearts for CCGs, so it’s been an absolute RUSH to put the Meat Boy Cinematic Universe into a card game,” said Super Meat Boy: Rival Rush lead designer Kyle Pulver. “Rival Rush is our chance to really put Meat Boy in your hands without getting blood everywhere.”

Meat Boy took the world by storm in 2008 when it was conceived as a free Flash game by developers Edmund McMillen and Jonathan McEntee. This devilishly difficult love letter to arcade platformers went so viral that over 8 million people played it. Due its popularity, Team Meat founders Edmund McMillen and Tommy Refenes collaborated on a commercial successor that became the 2010 megahit Super Meat Boy, which went on to sell over a million copies in its first 15 months. Nearly eight years later, Super Meat Boy is still capturing the populace’s imagination as its Switch port’s launch sales nearly matched that of its 2010 debut on Xbox 360. The franchise’s latest project is Super Meat Boy Forever, which is due in 2018 on Nintendo Switch, PlayStation 4, Xbox One, and PC.