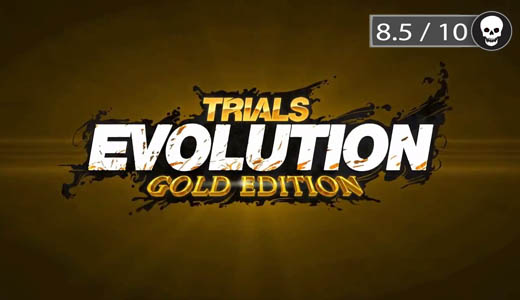 Trials Evolution: Gold Edition brings the 2012 Xbox Live Arcade Trials Evolution along with the previous entry, Trials HD, to PC. Developed by RedLynx, these 2.5D platform racing games bring much of what is missing from many AAA titles today, a simple and fun challenging experience.

The game excels at what it is; but some aspects still fall short of what it could be.

You control a motorcycle rider viewed side on, in two dimensions, as he travels through a three dimensional environment; basically like a side-scroller. Your very difficult, but enjoyable, task here is to get to the finish line as quick as possible while trying not to crash. Crossing the finish line will reward you with a medal based on your performance and earn you a nice scene involving your rider blowing up, falling from significant height or otherwise experiencing a situation that would almost certainly be painful. 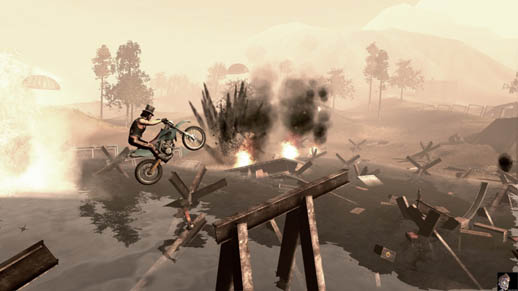 These scenes provide for some great entertainment to help relieve any built up frustration you have gain trying to complete the course. The medals are rewarded on the basis of goals reached in both time and faults (aka crashes). Sets of tracks are unlocked based on the number of medals, with a gold worth more than silver etc.

The courses are filled with jumps and obstacles that you must skilfully make your way pass. Despite only requiring four buttons to control your bike, trying to successfully land jumps, cross gaps and climb steep inclines in the latter half of the game proves extremely difficult. I often found myself getting very frustrated, more at myself then the game, when I got stuck at a certain obstacles. This frustration only made me want to play the game more and provided a great sense of accomplishment when I finally was able to complete the level. 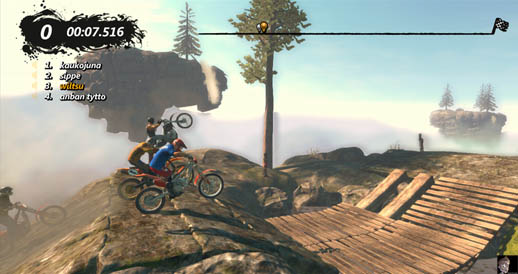 Most courses only take less than one or two minutes from start to finish, however you can find yourself spending over 15 minutes on some of the more difficult levels trying to achieve gold. Located frequently throughout the level are checkpoints where you are able to return after crashing. Doing so however will cost you both time and faults, making achieving that coveted gold medal ever more unlikely. Never taking my eye off the golden prize, I found myself choosing to restart the whole race more often than not. A major problem I found was the game not telling me what time and number of faults I needed for what medal until I finished the race.

There are total of five motorbikes that can be unlocked throughout the game. Generally each new motorbike has better performance but is much more difficult to use. You are able to change the look of your motorbike by use of your garage. Also here you are able to change the appearance of your rider to something that more suits you, say a guy wearing a top hat in ancient armour. This feature definitely added to the overall game however the selection available could be expanded. 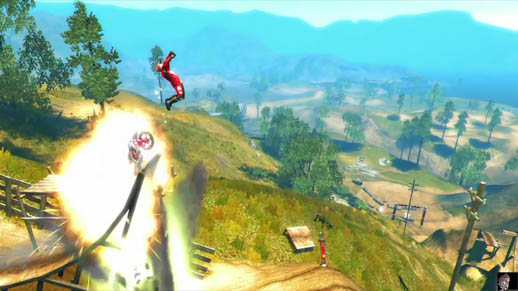 Another component of single player is a game mode called Track Central. Here you are able to create and share tracks for yourself and others to play.I enjoyed trying other people’s creations a lot more than creating my own. I found the track editor very tedious and inaccessible to use and overall not worth it. If you are a person who generally enjoys spending lots of time making your own levels, you may still enjoy this component.

Outside of the single player game there is multiplayer for you to try and enjoy. The multiplayer, when you can actually find other people to play with, does not provide a very rich experience. It consists of what you would expect, trying to beat the other person to the finish line. I was often only able to find one other person to verse which greatly reduced the level of excitement I had during the race. The multiplayer does however provide you with a sense of relief as you realise you’re not the only one who finds this game very difficult. 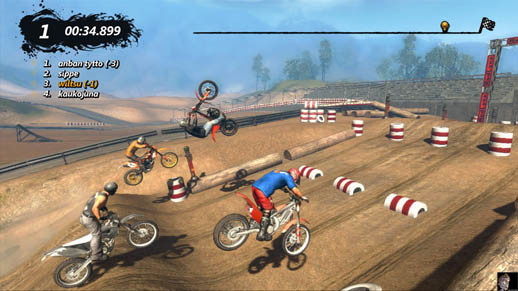 The graphics in this game, while they may not compare to recent AAA titles, exceed the level that would be required for this sort of title. I often found myself temporarily distracted by the surrounding environment as I looked in amazement at the level of detail they’ve put in. The setting changes greatly between tracks which further prevents the game from feeling stale during the ever so fun but repetitious gameplay. While you traverse the course there are often things happening in the surrounding environment, from helicopters in the background blowing things up to gravity changing in the level. These provide for much entertainment and add to the overall sense of fun that is present in the game.

The sound does a wonderful job of setting the mood throughout the levels and menus. You will notice this as soon as the opening soundtrack plays when you start the game. The motorbike engine sounds awesome and feels very reactive to how you are riding.

Trials Evolution: Gold Edition is not one for everyone, but if you are looking for a simple and challenging game, this is for you. It is both simplistic and fun while still maintaining a level of depth.  While there are many things that could be improved, the game is more than worth the price tag put on it. I would recommend this title to anyone who is looking for something a bit different or for fans of the genre.