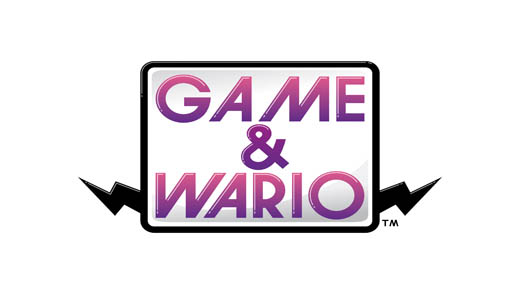 Wario and his zany friends are back in Game & Wario, a brand new, colourful collection of crazy games exclusively for Wii U. The game utilizes the unique setup of the Wii U GamePad controller and the TV screen in ways for a Wario experience like no other.

Wario has dabbled in software development since the WarioWare series – and just loves to find new ways to play games with the latest consoles. In Game & Wario, he’s trying his hand at a certain new home console system with a Touch Screen in the centre of its controller… This results in a zany set of games that can all be played using just a Wii U GamePad and a TV screen, whether playing alone or with friends and family.

In Single Player, there are twelve games to enjoy that turn your GamePad into a variety of different objects for different gameplay challenges: use it as a camera, a bow that looses arrows into the TV image, or as a method to steer a skier to the disco, amongst others. 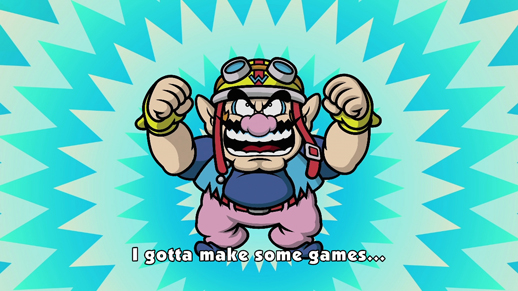 CAMERA being one of them where you’re tasked with snapping photos of escaped criminals with your GamePad. The TV shows a busy street in Diamond City and holding up the GamePad allows you to take a closer look at the scene. Frame those crooks perfectly in your photos to catch them, and earn a high score.

GAMER sees you take on the role of 9-Volt, a kid who’s been sent to bed with his favourite handheld gaming system, but is desperate to get a high score… However his mum is prowling around trying to catch him in the act of staying up past his bedtime. While playing microgames on the GamePad, you’ll need to keep an eye on the TV screen which shows 9-Volt’s bedroom, because you’ll have to pretend to be fast asleep whenever his mum pounces. Try to hide-and-play for as long as possible for a high score – just don’t get caught or it’s game over!

You can also try your luck with Chick-N-Win, the chicken-shaped contraption that lays surprise-filled capsules, and get one of over 200 weird and wonderful toys to play with; each one showcasing something fun or eccentric you can do with your GamePad.

Game & Wario also unveils a new twist on playing with others on Wii U: using only the GamePad you can share the fun with friends or family in four different games in the Multiplayer Mode. 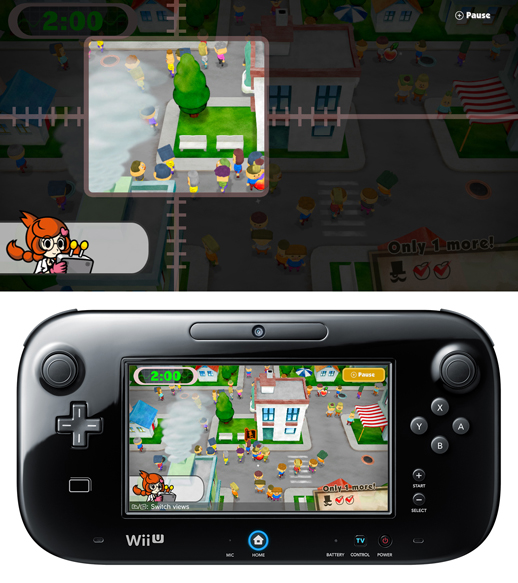 With DISCO, you’ll be battling against a friend toe-to-toe in a dance-off, where the players are setting the pace and moves on the GamePad for points. Each player holds one end of the GamePad and tries to outwit his opponent with fancy fingerwork, rhythmically tapping the touch screen in three places to place moves his opponent needs to replicate. Each misstep earns the player’s opponent points – you’ll need the highest score to win – so make sure you can keep in rhythm.

FRUIT allows up to five players play together in different roles: one player becomes a dastardly fruit thief, using the GamePad to work in secret as the others play agents and watch the TV screen, using their powers of observation to find the thief in a crowd and spot when the fruits disappear. The agents have their work cut out for them with bustling streets, passing traffic and smoky chimneys obscuring the view. At the end of the game, each of the agents pass around the GamePad to point out who they think is the thief; but only the most eagle-eyed may win as the line-up of would-be fruit thieves look rather similar.

In ARTWORK, up to five players compete in a sketching showdown to see who can draw and guess drawings the fastest for a high score. Each player takes turns to sketch prompted words as fast as possible on the GamePad, with the other players guessing what the word might be. It’s a frantic test of communication with friends and family as points are earned both for correct guesses and for drawing fast, as one man’s squiggle is another man’s solution.

This game type is also integrated into Miiverse as ‘Miiverse ARTWORK’, where you can select one of four prompts to draw in 60 seconds, after which your mini masterpiece, or hilarious doodle, is posted to Miiverse to be appreciated by all. You can even submit your own words to be prompts for others to draw, which may even trend in the Gallery section of Miiverse Artwork as popular words other players are enjoying sketching.

Game & Wario launches exclusively on Wii U across Australia and New Zealand on the 29th June 2013, encompassing a fun-filled package of sixteen games and hundreds of toys all showcasing the myriad uses of the Wii U GamePad – Unleash Wario’s unique wares on your family and friends for a winter jam-packed with mischief.