The Evil Within – Review 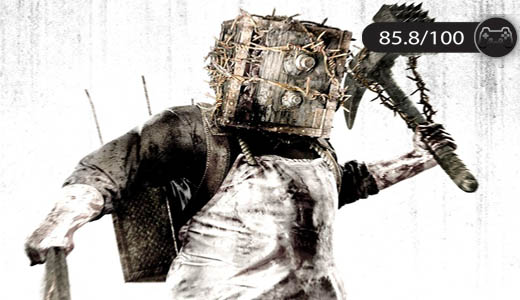 “It smells like blood”. Those words, spoken near the beginning of the game truly sets the tone for what you are about to endure. Blood lust, gore and death. Alot of death.

Beacon Mental Hospital has become the site of a brutal slaughter of staff and patience with only a couple of surivors.

Local police tend to the call and Detective Sebastian Castellanos arrives there shortly after, only to find empty patrol cars and an eerily quiet foyer of the Institution.

It’s not long before blood trails which lead to bodies are found and viewing the security footage unveils something darker, evil and supernatural. 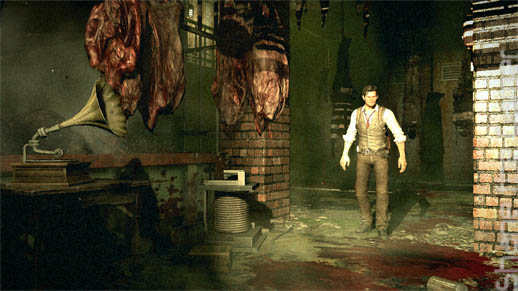 Then, quite literally the world as you know it begins to change.

After a short adrenalin fuelled but futile escape, Castellanos finds himself tied upside down in a dark room of hanging bodies.

A hulking mutant proceeds with his butchery of the carcases as you plan your escape.

As always, escape is futile as you are chased and cut by this chainsaw weilding brute into a giant mincer room… It’s full on and your very life hangs with every step or slide. You can hide, you can run, but you can’t escape The Evil Within. 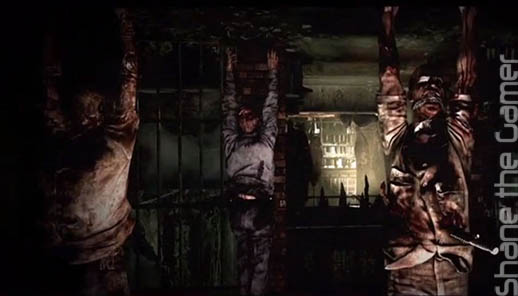 And this is only the Intro into the game.

After the somewhat flawed escape attempt from the hospital in an ambulance, you release yourself from the wrecked vehicle finding yourself in a wooded area which leads to an old run down township..

As you saunter around collecting items an killing off the undead whilst looking for the survivors, a patient, a doctor and your rookie Police partner Julie’Kid’ Kidman you discover that the land is riddled with various traps. 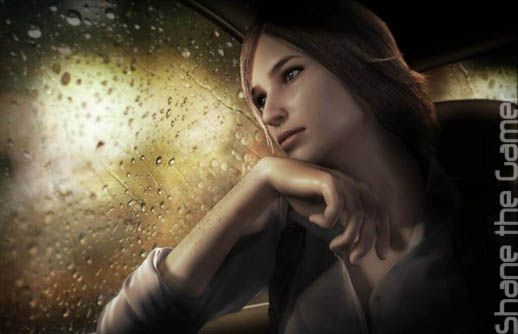 From Dynamite linked trip wires to bear traps and more, both can be disarmed if you are careful enough not to set them off. That said the bear traps are the worst, as your environment is dark and at times (especially when sprinting away from a horde of undead that are pursuing you) you will easily step onto one and it takes time to free yourself.

I found myself questioning why there were survivors. Were they apart of the plot? Are they somehow tied in to what was going on? When you reach the doctor he is in dire need of his patient; Leslie… But getting to Leslie sees you need keys, which are sewn into a corpse.

Levels and environments are not what they seem. Is one place another? Are you delusional and have you not moved at all. Is this al the beginning or the end?

This is one title that will not only give you a good scare, but will also have you totally at the edge of your seat.

There is a small RPG element in the sense that you can carry a small inventory. 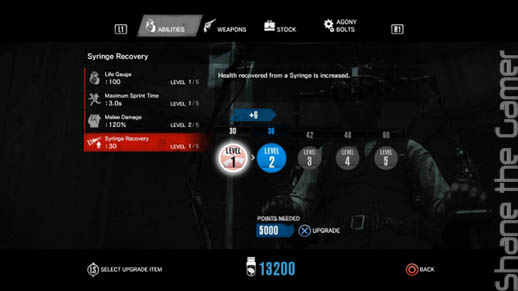 This is your primary weapon (police pistol) and syringes that you might pick up (these are the much needed and rarely found health), med kits, journals, grenades and scrap parts so you can cobble together your own weapons.

You will also acquire other weapons such as a cross bow with vairious darts and a shotgun. It’s within this inventory menu where you swap out weapons. None of which are dual wielding though.

You may also use objects found within the environment. Bottles can be thrown to distract the enemy so that you can sneak up behind them and enact a stealth kill or just sneak away and axes or other melee weapons. 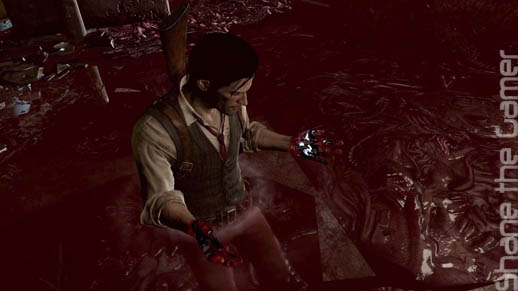 Collecting matches enables you to burn the bodies of those that you slaughter, this permanently finishes them off. These are limited however.

You also have a torch or lantern and if you are out of bullets, which is a common occurrence, try and find a flaming torch, as this is very effective in melee.

Green Gel or bottles of pills are used as a form of currency in the Upgrade Menu where you can upgrade your abilities, such as stamina or health bar, through to leveling up your weapons. Even your Inventory can be upgraded to enable to carry more loot. There is no jump, but there is a sprint which is reliant on your stamina and a large focus on stealth and trying to remain undetected throughout the entire game. 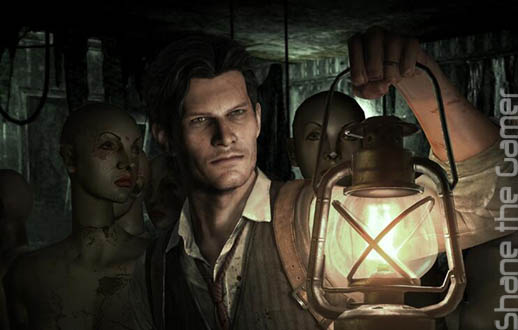 Game saves are enacted through mirrors.

You are transported through a mirror back into the Beacon Mental Hospital.

A nurse is there waiting for you and leads you to an Electric chair. 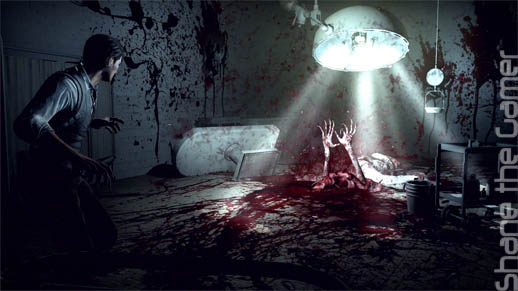 Strapped in and unable to move with the electro head piece firmly in place, each upgrade you do gives you a good healthy zap.

It makes you wonder whether the game you are playing is all a delusion and you are actually still within the confines of the hospital itself.

So, how did this mayhem start?

It’s all the work of one dark and evil entity called Ruvik. You first see him on the security cameras before all hell breaks loose, literally. 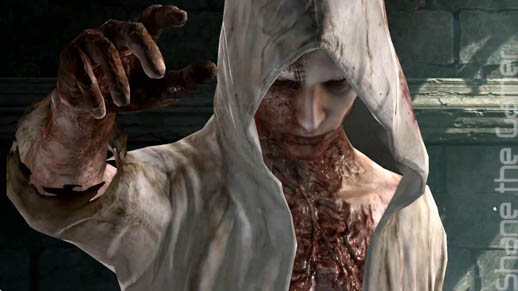 From the city to the dilapidated village through to blood stained factory like buildings, your path eventually leads back to the Hospital to face off with Ruvik.

The undead that you face, for the most part are well constructed but do clone with the special Boss here and there, including the Boxhead – which you may have seen on the gameplay trailer already.

Graphically there is so much detail. Bethesda didn’t skimp on anything here. However on the Xbox One, I did notice that while the environments had an insane amount of detail to them, some character animation looked a little choppy here and there.

There is a hazy film grain overlapping the game screen and this retains an eerie and foreboding feeling. 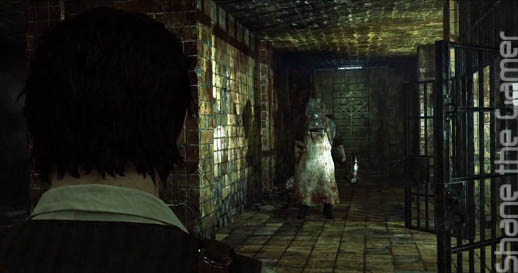 After many, many hours of playing through The Evil Within I am pretty sure that I died more times than ever due to the frustrating ingame camera.

When you can, try and avoid melee combat, unless you are holding a meaty weapon (like an axe or similar). Having a bout of fisticuffs against one of the tortured undead will most likely leave you worse for wear. There’s no shame in running for your life.

It seemed that the camera was unable to keep up with melee combat and alot of the time objects within the environment kept getting in the way of the view so I was unable to see what, if anything I was hitting.

Then there’s the enemies you can’t see… 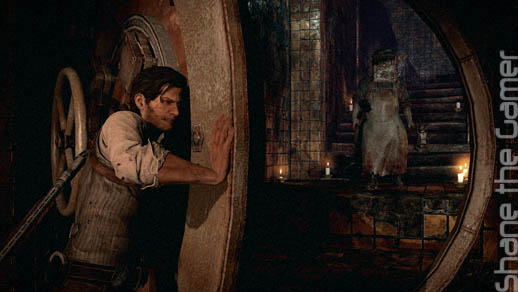 Frustrating yes, but a small, oh so small issue in a game that is as amazing as this one.

A good lengthy play and one that certainly has replayable value to it. The Hardest game setting is not available until you have conquered the game first time around.

If Silent Hill and Resident Evil were to ever have an illegitimate offspring, that grew up to be a rebellious teenager – that perfectly describes The Evil Within. A masterful game by the legendary horror video game master; Shinji Mikami

You need this game. Just have a spare pair of undies handy.