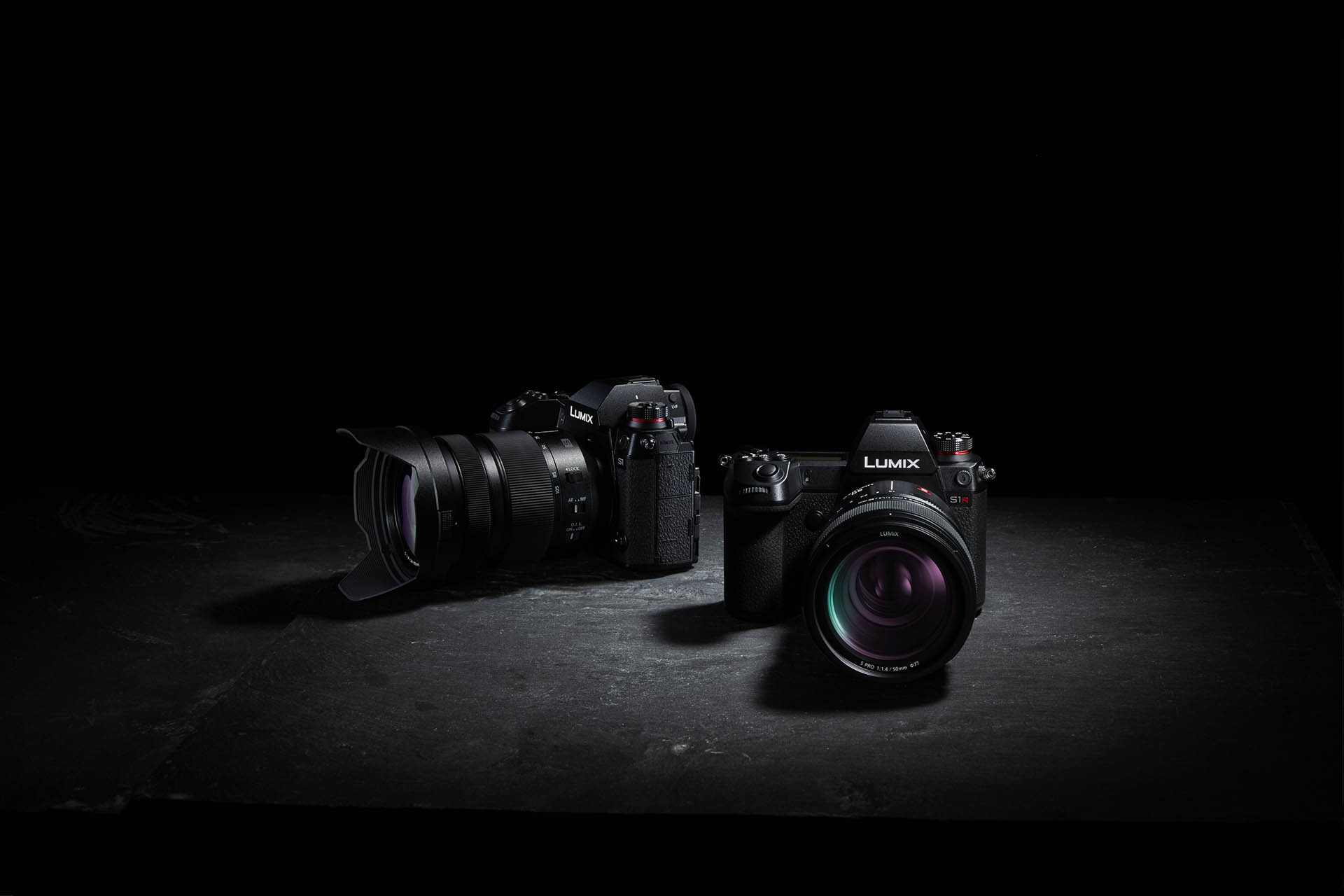 Panasonic is proud to introduce the full specifications of its long-awaited first full-frame Digital Single Lens Mirrorless cameras, the LUMIX S1R and S1, with a 35mm full-frame CMOS sensor.

The LUMIX S Series aims for unprecedented image quality with high resolution, rich gradation and superior color reproduction. A high-speed, high-precision AF system based on advanced control technology over the lens, the sensor, and the new Venus Engine enable the user to capture the target in sharp focus without fail. It also boasts industry-leading video recording performance (4K 60p / 50p), intuitive control, a rugged design for heavy field use, durability, and expandability.

The new cameras are based on the L-Mount standard, which boasts a well-balanced, large inner diameter and compact dimensions for a flange focus to realize optimum size and performance as a mirrorless camera system.

The LUMIX S1R has 47.3-megapixel full-frame CMOS sensor (36mm x 24mm), which gives it the industry’s highest level of resolution in the full-frame mirrorless cameras, to pursue the ultimate power of expression. In addition to the precise reproduction capability in detail, this sensor achieves a high S/N ratio by taking advantage of its high light-condensing efficiency despite the large number of pixels. 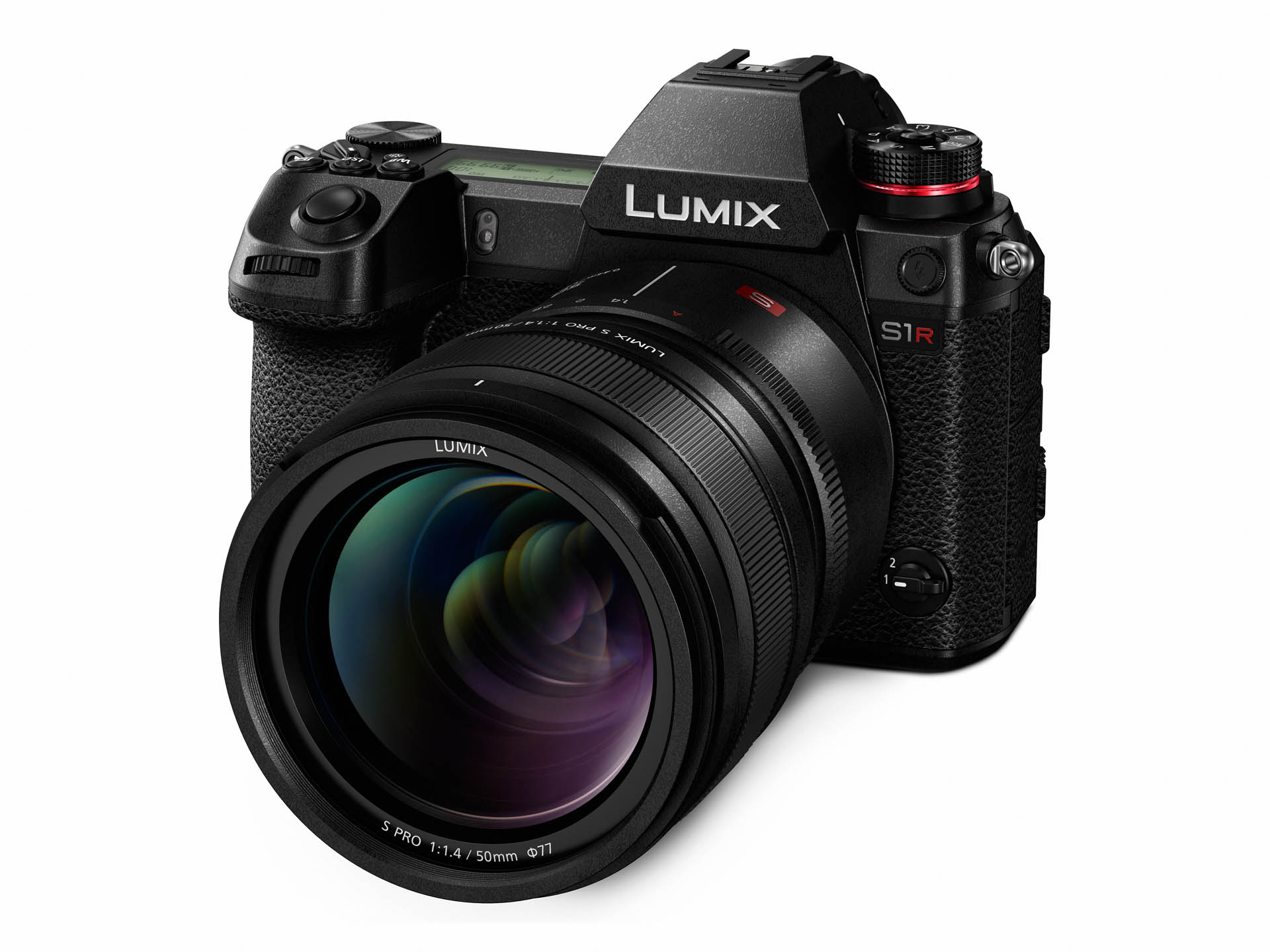 The LUMIX S1 comes with a 24.2-megapixel full-frame CMOS sensor (35.6mm x 23.8mm) that provides a wide dynamic range and excellent performance at high sensitivity in addition to a natural yet sharp image description. The LUMIX S1 supports professional use in videography by taking advantage of the stunning expression performance that a full-frame camera can offer. It records smooth 4K 60p / 50p video and enables full-pixel readout of signals in 4K 30p/25p to save truly beautiful footage. Furthermore, the LUMIX S1 will comply with 4:2:2 10-bit 4K 30p/25p internal video recording and 4K 60p/50p HDMI output as well as V-Log, with a software upgrade key (to be sold separately) following soon in 2019.

Panasonic New Zealand, Product Manager, Andrew Reid, says: “At Panasonic we’re committed to pioneering new innovations under the vision of “Changing Photography”, which is why we’re excited to be launching the new full-frame mirrorless LUMIX S1R and S1 cameras in New Zealand.”

The LUMIX S1R incorporates a new 47.3-megapixel CMOS sensor without LPF (Low Pass Filter) to realize high resolution and descriptive performance. This sensor adopts an aspherical lens for the on-chip micro lens to enhance light condensation. Together with the optimum design to concentrate more incoming light onto the photodiode, it achieves both high resolution and highly efficient light condensation performance.

The LUMIX S1 employs a 24.2-megapixel CMOS sensor. The new Venus Engine, which is exclusively tuned for the full-frame camera, and its Multipixel Luminance Generation and Intelligent Detail Processing realize natural, high-resolution expression while suppressing color moiré. Three-dimensional Color Control improves the color reproduction of both bright and shadow areas. This results in natural, true-to-life images from low to high sensitivity. Taking advantage of sufficient light condensation, the LUMIX S1 boasts a wide dynamic range and reproduces sharp images with exceptional clarity. Noise is minimized even when shot at maximum ISO 51200 high sensitivity. It is an ideal camera to use especially in low-light situations.

An AR coating applied on the sensor of both LUMIX S1R / S1 minimizes ghost and flare even in backlighting. Combination with the high-quality LUMIX S Series lenses based on the L-Mount further enhances the potential of the camera.

Plus, the LUMIX S1R / S1 integrates the Body I.S. (Image Stabilizer) for powerful handshake correction. Panasonic developed an algorithm that precisely calculates shake information acquired not only from a gyrosensor, but also from the image sensor and accelerometer sensor. This enables more accurate shake detection and compensation, making it possible to use a 5.5-stop slower shutter speed.

Taking full advantage of its high-resolution sensor, the LUMIX S1R / S1 provides a High-Resolution mode that faithfully reproduces precise details to be saved as beautiful, highly realistic RAW images. Eight consecutive images are automatically shot while shifting the sensor using the Body I.S. (Image Stabilizer) mechanism and synthesized into a 187-megapixel equivalent (16,736 x 11,168-pixel) image for LUMIX S1R and 96-megapixel equivalent (12,000 x 8,000-pixel) image for LUMIX S1 by the new Venus Engine, which boasts high-speed signal processing. This mode is suitable for taking natural landscapes or fine arts with delicate details. This magnificently high resolution photo is ideal for landscape photography of stationary subjects using a tripod. However, it can also be used in situations where moving subjects are included in the scene, by switching the sub mode.

The high-precision shutter unit offers the highest shutter speed at a maximum 1/8000 second to capture spur-of-the-moment, fast moving subjects and to use a high-speed lens with a fully open aperture even outdoors for impressive defocusing. The external flash can be synchronized with the industry’s fastest shutter speed of a maximum 1/320 second. 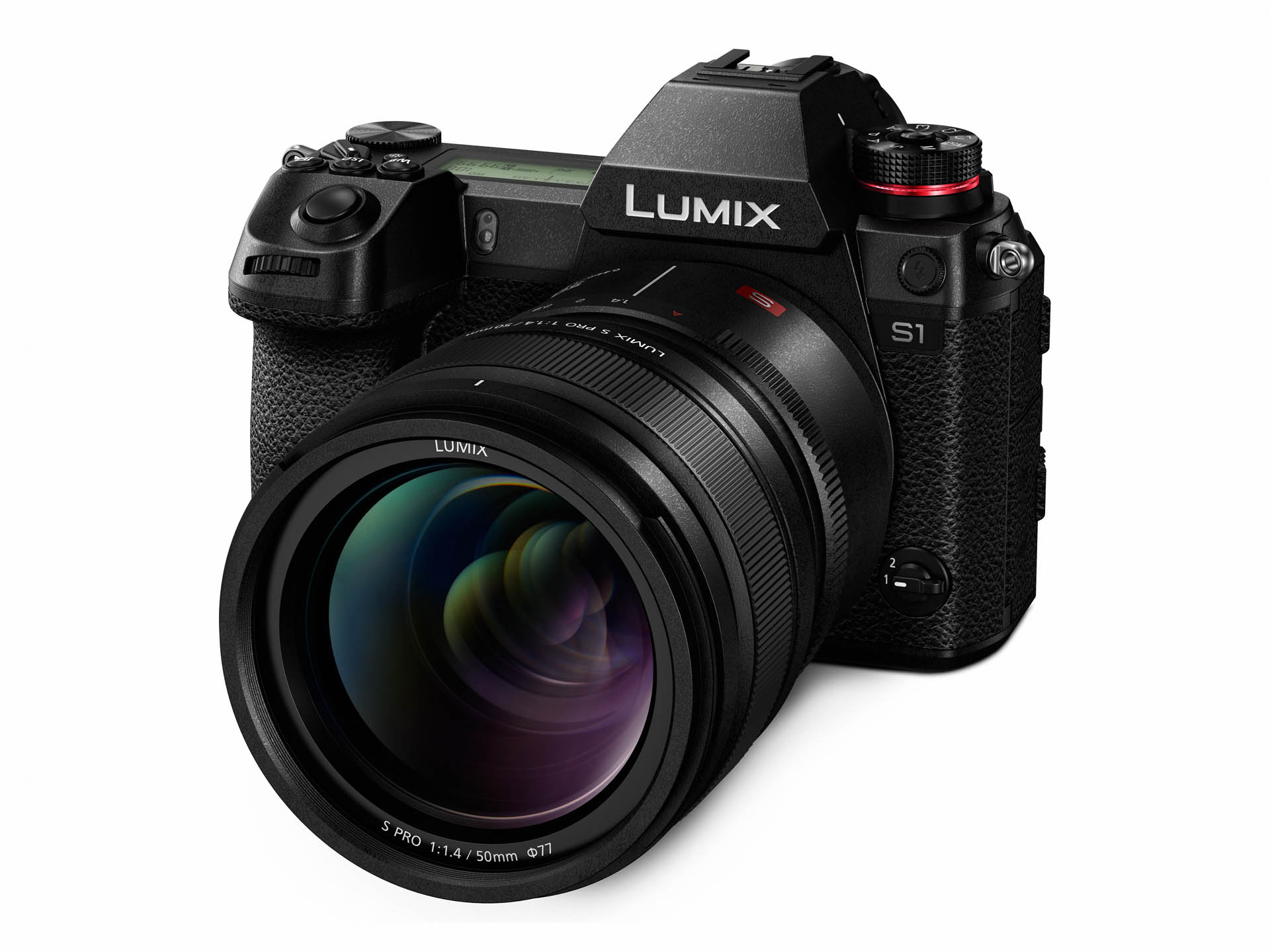 For more continuous burst shooting, 6K PHOTO makes it possible to capture unmissable moments at 30 fps by extracting the frame with the best timing out of a 6K burst file (in 4:3 or 3:2 aspect ratio) to save as an approximate 18-megapixel equivalent high-resolution photo. Users can choose the most suitable burst shooting mode in addition to the regular consecutive shooting mode in full resolution depending on the situation.

The LVF (Live View Finder) is the key factor for completing the ultra-high-speed response of the camera. The LUMIX S1R / S1 has the largest level of Real View Finder which boasts the world’s highest 5,760k-dot resolution. The 0.78x magnification ratio can be switched to 0.7x or 0.74x according to the shooting situation. Adoption of a high-speed, high-precision OLED (Organic Light-Emitting Diode) for the LVF achieves smooth display at 60 fps/120 fps (switchable) and high-speed response with minimum time lag of less than 0.005 sec as well as 10,000:1 high contrast for exceptional visibility. With minimum distortion and high optical performance, this Real View Finder provides a natural view as seen with the naked eye. It is always sharp and clear from the center all the way to the corners.

To make the camera just like a part of the photographer’s body, the LUMIX S1R / S1 provides a firm grip, making it easy to hold for long periods. The control buttons and dials are located based on an ergonomic study to enable the user to concentrate on shooting. The adoption of an 8-directional joystick and refined UI (User Interface) also supports quick operation during shooting. In addition, illuminated buttons can be of help in low-light situations. An operation lock lever prevents unintentional operation, and the user can choose which operation to lock.

To be tough enough to withstand heavy field use, the main structure is composed of a magnesium alloy full die-cast front/rear frame. Robust construction and a sealing for every joint, dial, and button make the LUMIX S1R / S1 not only splash resistant and dust resistant but also freeze resistant down to -10 degrees Centigrade. The shutter unit is also durable for approximately 400,000 cycles. The LUMIX S1R / S1 is equipped with a double Memory Card slot compatible with SD (UHS-II) or XQD Memory Cards for high-speed, high-capacity continuous data recording.

Both LUMIX S1R and S1 offer outstanding video recording performance,the LUMIX S1R is a camera designed and developed to boast exceptional performance in photography, yet is capable of 4K 60p/50p video recording. The LUMIX S1 provides professional videography with 4K 60p/50p recording. It realizes a crop factor of 1.0x in 4K 30p/25p/24p, which means that the user can record video in the original viewing angle of the lens. There is no recording time limit for both 4K 30p/25p/24p and Full-HD video.

As a camera from Panasonic that has been overstepping the limit of video performance in digital cameras, a host of functions are available on the LUMIX S1R/S1. The High Speed Video lets users record slow motion video in 4K (maximum 60 fps/ 50 fps) and FHD (maximum 180 fps /150 fps). For the terminal, an HDMI Type A is provided. Plus, a cable lock holder for the HDMI cable is included in the LUMIX S1R / S1 to prevent unplugging trouble on location. LINE input is also supported by a 3.5-mm microphone jack. This makes it possible to input sounds from an external audio device, for more efficient video production. 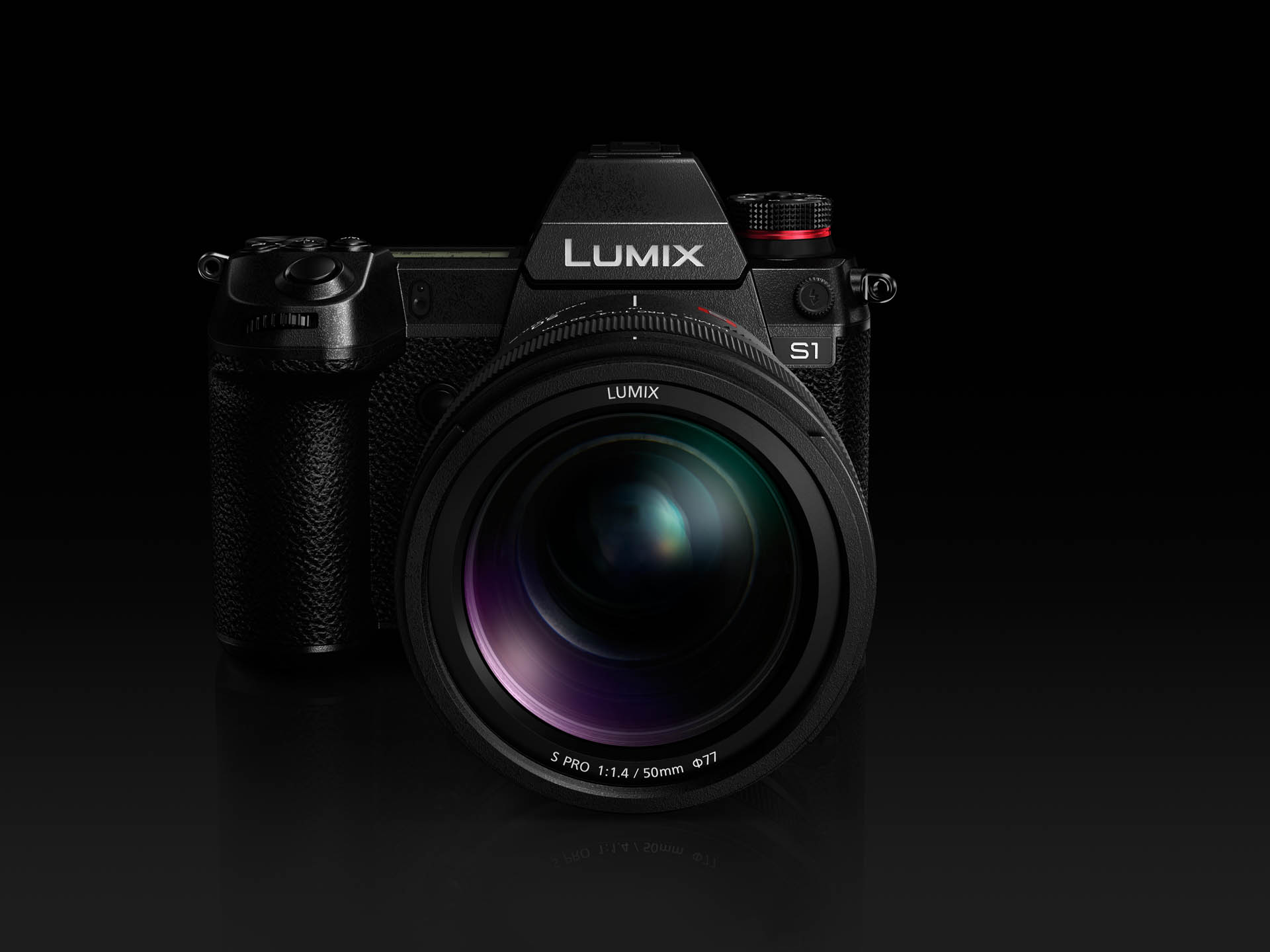 Other notable features of both LUMIX S1R and S1 include:

Panasonic’s advanced Contrast AF system with DFD technology has evolved through the development of numerous mirrorless cameras to make the AF system of the LUMIX S1R / S1 even more practical. It achieves not only the industry’s fastest level of focusing speed but also a tracking performance that is made possible by the adoption of Advanced AI Technology that accurately recognizes moving target subjects.

A variety of new accessories are available for the LUMIX S1R / S1 including Remote Shutter (DMW-RS2), Eyecup (DMW-EC6), Battery Grip (DMW-BGS1) and Battery Charger (DMW-BTC14). The Battery Charger also complies with USB PD and enables quick power charging in approximately 2 hours. The camera can be used while charging via this adaptor. The conventional External Flash (DMW-FL580L / FL360L / FL200L) can also be mounted on the LUMIX S Series cameras.