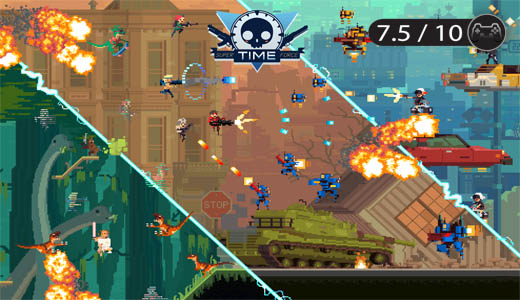 For a downloadable arcade title that harkens back to the days of side-scrolling shooters like Contra, Super Time Force is surprisingly difficult to explain in a review.

Suffice to say – it’s big, bright, silly and puts a lot of emphasis on time travel.

The plot of Super Time Force basically acts as a loosely strung together tool to the put the aforementioned time force – a group of highly trained and comically named soldiers – in a range of different locals across space time, saving the day from various calamites – be it killer robots in the future or a giant asteroid in the ancient past.

Each of these settings is split across four Levels, each of which you are given a sixty second time frame to blast your way through – shooting your 8-bit guns away to your heart s content. 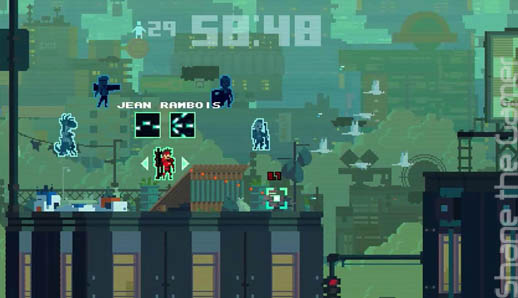 And this is where things get tricky – time is a very fluid concept in STF. Throughout each Level, you are given 30 rewinds.

Every time you die, or simply choose to activate a rewind, you can jump backwards to any previous point of the level and start over. Your previous version of yourself from the past timeline will still be fighting along as they were before, meaning you can have countless versions of yourself bouncing around the screen achieving different objectives at the same time. 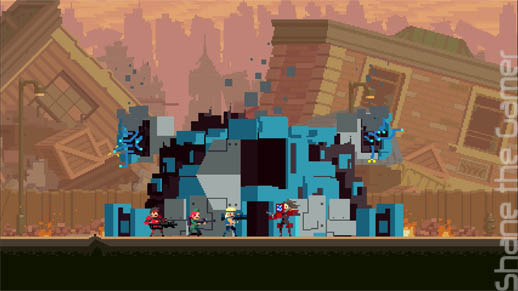 For example, certain bosses seem impossible to kill within the sixty second time frame you’re given, but once you’ve rewound enough times to have a different version of yourself shooting it from every possible angle, the odds are likely to be stacked in your favour.

Each of the characters you play as throughout the game (you can change from character to character at the point of rewind) have one base ability, and one special ability, which offer you a range of different ways to tackle each situation. 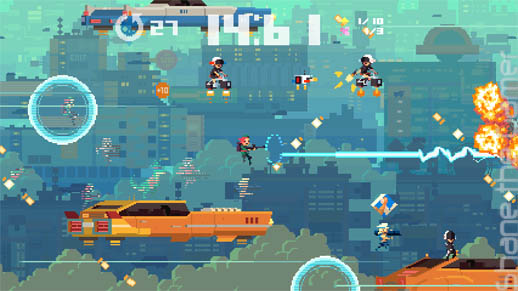 Further depth is added by the ability to save alternative versions of yourself. If you can prevent another version of yourself from dying – perhaps by killing a soldier before he manages to fire the shot that killed you the last time around – you can take the lifeforce of the previous version, taking an extra bit of HP and gaining their special ability to boot.

If it sounds complicated there, trust me, it isn’t – time travel just makes everything sound more difficult than it actually is. 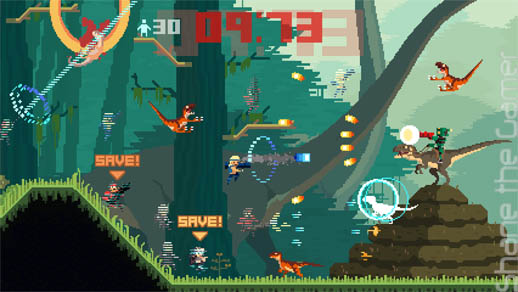 Super Time Force is put together in a very cool 8-bit style that ends up looking bright and wonderful on the Xbox One.

The music is suitably 8-bit too, each Level offering a different take on the same basic musically set-up you might expect from a Mario Brothers game from the last 80s.

Combine this with a cheeky, generation Y sense of humour and some surprisingly subtle reference thrown in for good measure, and a pretty decent run time, you’ve got yourself a very enjoyable arcade title to waste away a few hours over the course of a rainy weekend.

Well worth checking out.