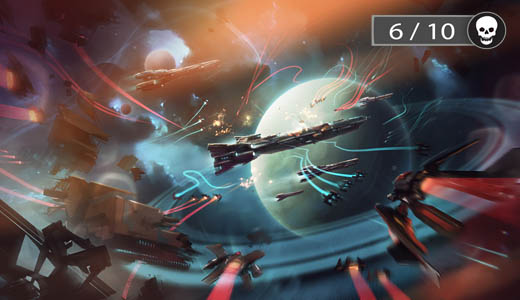 Among the flurry of PC titles making their way to console is Born Ready’s Strike Suit Zero the Director’s Cut, an ambitious space shooter, featuring both the original campaign as well as the Heroes of the Fleet prequel missions.

Strike Suit Zero offers countless hours of gameplay, yet a lack of focus from the studio makes these hours an overall disjointed mess.

The old saying, “there’s nothing new under the sun” is certainly proven true when it comes to the game’s narrative. Discovering a signal that communicates the means for deep space travel, mankind journeys out to find the source. Over the years planets are settled and the dominion of the human race expands. Those colonised planets seek to sever ties with those who remain on Earth, and conflict arises.

As a pilot for Earth’s forces, it is up to you and your prototype spacecraft to defeat the colonists and save your home planet from their doomsday device. 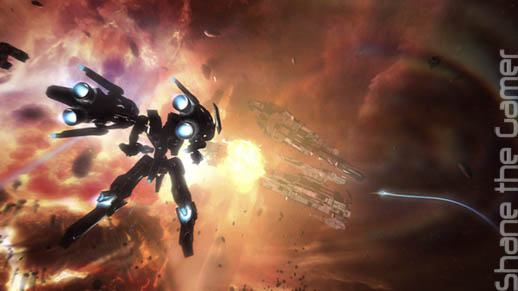 This lack of originality isn’t the source of the game’s downfall, but it is certainly a contributing factor.

While many combat games sacrifice narrative for the sake of gameplay mechanics, the result can be that a player wont know what the stakes are – or worse, they wont care. This can certainly be said for Strike Suit Zero, where lengthy dialogue voiced by subpar acting acts as a distraction rather than a motivation.

Normally many of these complaints could be ignored once you’ve loaded up a level and are seated firmly in the cockpit of your ship, but sadly this isn’t the case with Strike Suit Zero. No sooner are you in combat and completing objectives than you are pulled out of the action by endless cutscenes that seem to wait until you have missile lock on your enemy before interrupting you. 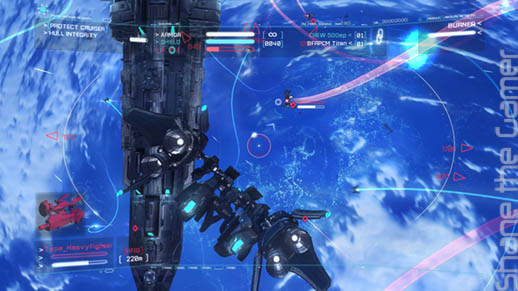 These cutscenes fail to develop the plot, showing more ships jumping into the battle with a disappointing lack of spectacle or graphical fidelity expected of a PS4 game.

The overall effect is to rip you out of immersion, show you something fairly pedestrian, then dump you back into combat completely disorientated. The frequency of these cutscenes is what truly lets this game down. In a typical 20 minute mission there are at least 5 cutscenes, each averaging 15 seconds if not skipped. 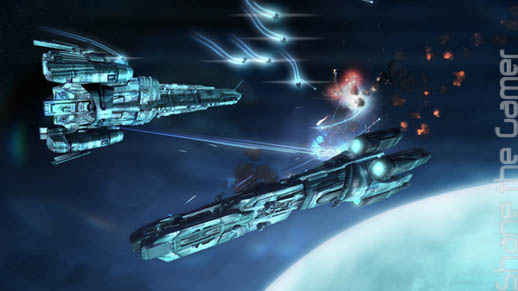 Despite all of this, the combat still works towards redeeming the game. Deeply immersive and fluid, flight feels completely in your control and the ability to switch between 3rd and 1st person views gives you options for your preferred style. The transformation of your prototype ship from typical fighter to a powerhouse arsenal is a great way to give you that extra boost, but feels underdeveloped as a concept in relation to the rest of the story.

Balance between the two modes is tuned nicely so you don’t constantly need the extra firepower, but appreciate it when its there. The ship itself is formidable enough, but shifting modes becomes a great way to get yourself out of a tight spot or add a extra bit of ordinance to take down a particularly armoured enemy. 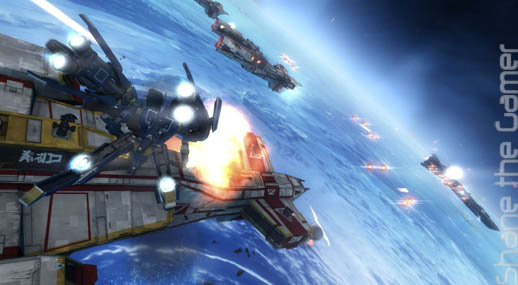 Heroes of the Fleet missions are a great step up in difficulty after completing the main campaign, and adds some much needed depth to the overall story.

Playing through recreations of the events that led up to war between Earth and the Colonists, these simulations are perfect for those wanting that extra bit of time in the cockpit. Narrative is less heavy handed as well, using a lot more voice over dialogue than the detrimental cutscenes of the main campaign. Allowing for a more complete experience, these missions offer a steep difficulty curve, but a satisfying conclusion to your gameplay. 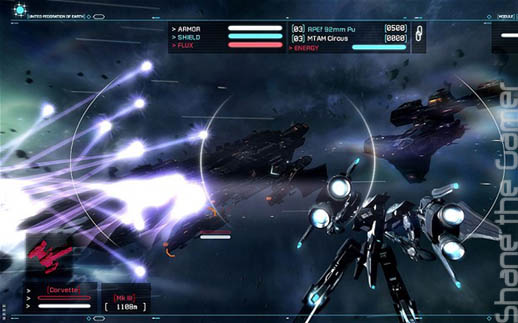 The real shame is that at its core, Strike Suit Zero is a strong game with great mechanics.

Controls take a bit of getting used to, but then it’s a great balance between keeping your targets locked, and maneuvering a swift and deadly little ship. With multiple difficulty settings, different medals to earn, as well as weapon upgrades and a variety of ships to replay each level, this game has a lot to offer. If only it would get out of its own way and let you have it.