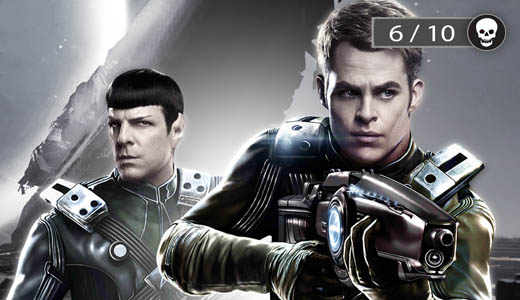 Space: the final frontier. These are the voyages of the Starship Enterprise. Its five-year mission: to explore strange new worlds, to seek out new life and new civilizations, to boldly go where no man has gone before.

And go boldly they did.

Even now, almost forty years since I first heard William Shatner utter those famous words – probably at the beginning of the Filmation cartoon rather than the original series- they still give me goose bumps.

Even though I ended up more of a Star Wars fan than one of Star Trek, I can still appreciate Roddenberry’s vision of a future that is a celebration of human scientific achievement. Whilst I long for a Star Trek future, it seems less and less likely with every passing year. But we can still dream. 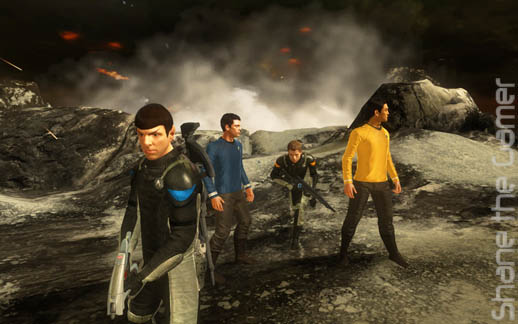 Paramount’s decision to completely recast the original crew of the Starship Enterprise for 2009’s Star Trek movie was a bold move to say the least. In the first 10 minutes the film erases over forty years of Star Trek history and for good this time. It was a gamble that thankfully paid off, with director JJ Abrams injecting a much needed vibrancy into a franchise that had been on its last legs for years.

It is no surprise that with the imminent arrival of the sequel, Star Trek Into Darkness, that the powers that be have decided on the timely release a Star Trek video game. The game, simply entitled Star Trek, apparently bridges the period between this new film and the last. 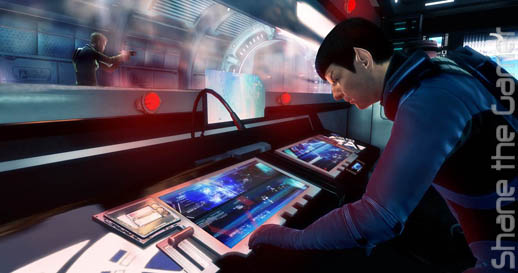 The moment the game loads, you can see that this is JJ Abrams version of Star Trek. As the crew man their stations on the surgically white Enterprise bridge, all those blue anamorphic lens flares glimmer around them. It looks straight out of the movie.

Following the destruction of their world in the 2009 film, the Vulcan people have established a new home on New Vulcan. Vulcan scientists are experimenting with technology that could save their decimated race. This same technology, in true Trek style, has also ripped a hole in the universe allowing the malevolent Gorn, a re-imagined version of the reptilian creatures from the 60’s show,  to pass through and steal the technology for themselves. 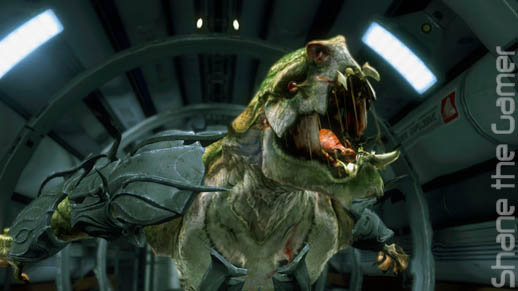 Enter the crew of the USS Enterprise, who stumble on the threat whilst answering a distress called from a research station about to plunge into a sun. As you’d expect it’s up to the crew of the Enterprise, specifically Captain Kirk and Mr Spock, to stop the Gorn and save the galaxy.

The game’s plot is well told and fits perfectly with this new version of Trek. The characters, as in the movie, superbly echo the banter in the original series. There’s nothing out of place with the narrative or the voice acting, which features the actual movie cast. 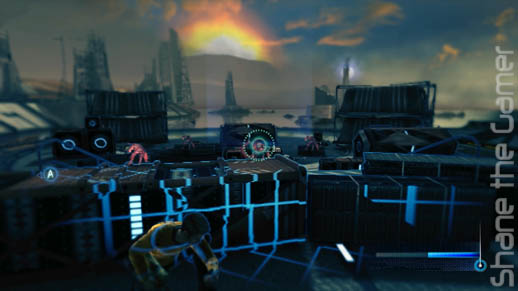 Players take on the role of either Captain James T. Kirk or first officer, Mr Spock, of the USS Enterprise in a game which is, by and large, a third-person shooter. Whilst the game is designed to be played by two players co-operatively, the can be soloed with the AI controlling the other character. If online co-op is enabled, other players can jump in mid-game, taking control of the AI character. The whole thing comes across as a sci-fi version of Army of Two, but without so much of the cursing and the gratuitous violence.

The game-play emphasis is on action, with Kirk and Spock battling their way through over ten chapters of fire-fights. The combat is peppered with the old bit of simple platforming and computer hacking-based puzzle-solving. As entertaining as the gameplay is, it does get a bit repetitive, never really drawing you in as it should. 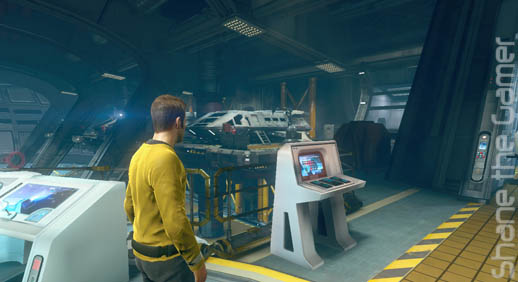 There are some great set pieces, but I found these only serve to highlight just how generic the rest of the game is. During one sequence, with Kirk and Spock outnumbered, and Scotty unable to get a transporter lock on them, Kirk orders the Enterprise to carry out an orbital strike on the enemy; the resulting cinematic being impressive if not really that interactive.

At another point in the game the Enterprise engages the Gorn with the player loosely in control of the ship. The sequence again provides an exciting interlude, but it is more down to what happens in the pre-rendered bits rather than the interactive elements. 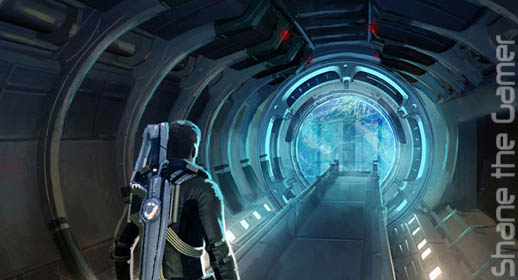 The rest of the game is really just those previously mentioned fire-fights, again and again. To its credit though, the cover system works pretty well, and should be familiar to anyone that has played the Army of Two games. Kirk and Spock can duck behind objects and, with the touch of a button move between cover points to get to a better firing position.

Star Trek features a selection of weapons, including the standard Federation-issue phaser (which, of course, can be set to stun). Additional weapons are mainly found in the field by picking up those from downed opponents. 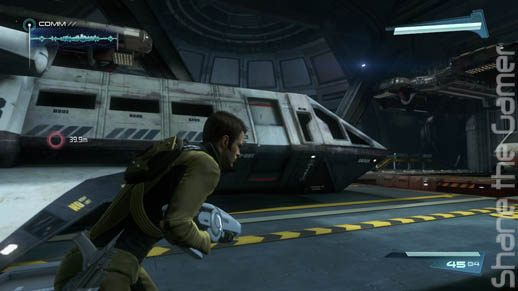 Progression though the game earns experience points which can be traded in for upgrades. Players can upgrade weapon damage and hacking prowess. I found the XP cost of upgrades to be rather expensive, the game really requiring you to work at it in order to unlock the more useful perks.

Whilst the game offers some good fan service in its detailed modelling of the USS Enterprise interior, the game-play is still fairly uninspiring. Star Trek walks such a fine line between OK and tiresome, it’s almost as if it was a calculated effort: to produce a game that sufficiently promotes the new movie without being anything more. 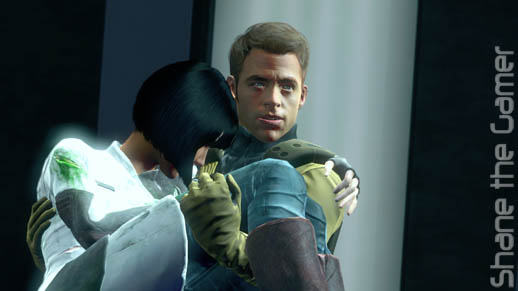 It’s not quite the money grabbing cash-in that Activision’s Walking Dead: Survival Instinct was, but it isn’t far off. It’s a shame as the Star Trek universe;especially JJ Abrams fresh, young version should be prime gaming fodder. Apart from Star Trek Online and the, now ancient, Voyager: Elite Force gamers haven’t done very well when it comes to Roddenberry’s baby.

Star Trek has all the hallmarks of a good game, high production values, a bit of variety, great voice acting and a decent plot. But it lacks any soul. With a bit more time and love, Star Trek could’ve been something really special. That fact that it came so close, and otherwise provided me with such fan service, makes it even more disappointing. 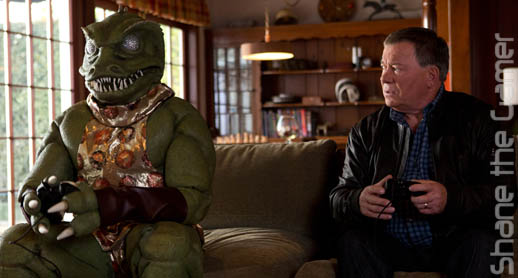