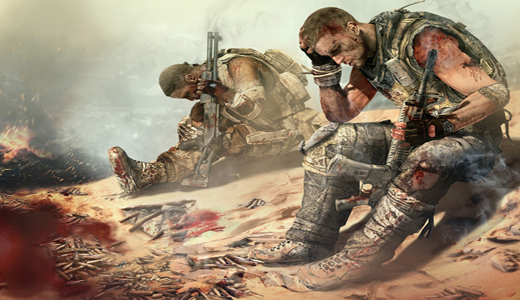 For a game with curiously generic military title, one might assume Spec Ops to be a carbon copy of any other tactical military shooter on the market. 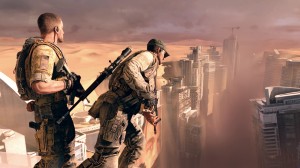 But Spec Ops is both less and more at the same time. Rather than attempt to revolutionize the cluttered third person shooter market, German developer Yager has stripped it back and re-skinned it with a visceral and compelling story.

There are no terrorist factions imposing a global threat to humanity, no countdown to nuclear apocalypse, biological warfare or technological sabotage. Instead, the story is focused on the inner-monologue of chief protagonist Captain Martin Walker as his psyche is constantly battered by the atrocities of war.

It is set entirely in the dessert city of Dubai, ravaged to waste by relentless sandstorms.
After intercepting a distress call from Colonel Konrad of the 33rd infantry, Walker and support squad of two charge into what ought to be a relatively typical recon mission. It turns out to be anything but. 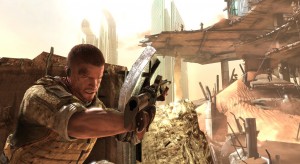 than that is likely to verge onto spoiler territory, as the story reveals itself to be a harrowing and disturbing series of events best experienced firsthand. The pacing is spot on, and key plot points reveal themselves just when you begin think the story has settled into routine.

The game offers up moral choices throughout, which amount to determining the best of two evils and are less about shaping the story (bar the multiple ending options) and more about sending a shiv of guilt through the players gut. Few games have managed to achieve this in a way that Spec ops does, as each choice the player makes has the propensity to haunt them for the duration of the game.

Which brings me to an argument that crops up from time to time. Can an engaging narrative save a game that would otherwise be a mediocre, bog standard, rinse and repeat affair in the gameplay department? I would argue that Spec Ops attests to that very notion. 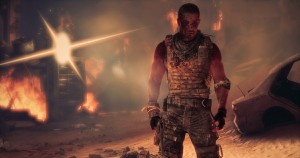 person shooter, with very little to define it in the gameplay department. Walker has the ability to shoot, sprint, use cover, and melee. There is no evade ‘dive-roll’ mechanic and no weapon cutsomization making control of Walker feel a tad diluted.

There are light tactical elements where you can use your squad when enemy numbers become unwieldy, such as marking priority targets or stunning groups of enemies with a flashbang but these feel more like rudimentary tactical elements, rather than fully realised gameplay devices. Otherwise, the game is essentially a linear progression through environments bookended often by open areas and large waves of enemies.

Certain areas contain sandy stopbanks of glass that explode when shot out, sending an avalanche of sand hammering down on enemies standing nearby. This is a novel, contextual reimagining of conveniently placed ‘explosive red barrels’ but is used sparingly enough to never become mundane.

For the obssessive collector 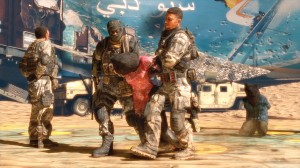 and achievement junkie, the game is littered with hidden collectible intel. Intel can come in the form of recorded radio transmissions or thought provoking objects. In any case, the intel helps flesh out peripheral elements of the story or heighten the often somber atmosphere.

And somber it is. Yager has done a remarkable job at making the constant ‘by the numbers’ slaying of foes actually have impact. Attitudes evolve throughout the game, and even the loading screen game tips messages begin to take cynical jabs at the player such as “Feel like a hero yet?” and “You’re still a good person”.

On that topic, loading screens you will experience often due to the punishing difficulty of the game in places. Unfortunately the difficulty arises due to some clunky controls, some unfair design choices and large checkpoint gaps. Even on standard difficulty, it can only take a couple of precision shots from a single enemy to ruin Walkers day, and when the game provides little discretion as to where it spawns them things can get very frantic. 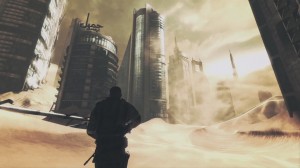 It doesn’t help that your gung-ho squad will sometimes charge on ahead of you with reckless abandon, getting gunned down in the process. With a strict bleedout time, you are forced from cover into the same crossfire in a desperate and often unsuccesful attempt to revive them. This amounts to much cursing and restarting.

Spec Ops: The Line’s visuals are pretty striking in places. The sand soaked Dubai landscape never gets tiresome to gawk at, and the game has a very surreal vibe. The peircing sun burns your retinas and sandstorms occasionally kick up, reducing your visibility to a few feet.

There are some nasty texture streaming issues from time to time, and shadows seem to have a very short draw distance, but otherwise the design style oozes atmosphere.

Voice acting is impeccable, with Uncharted’s Nolan North (Nathan Drake) as Captain Walker, and a strong ensemble cast to satisfy the story. The script is thick with expletives, so a cautionary word to the easily offended.

Spec Ops also offers a competitive multiplayer, which seems pretty ordinary. With few players populating servers, it was difficult to make a thorough assessment but from my limited experience there is very little on offer here. Versus modes are only available to begin, with several other modes unlocked with extended play time. It baffles we when players aren’t given full access to multiplayer until they’ve sunk several hours into the more banal deathmatch game types.

The chances are though, 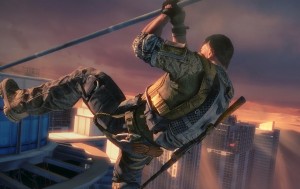 if you enjoy third person shooters you probably already own a game that provides a far more solid multiplayer experience than Spec Ops.

In closing, Spec Ops: The Line has the mechanics of a very ordinary third person shooter, improved exponentially by a powerful story and a profound sense of player motivation. You will be compelled to slog through every battle just to experience the visceral effect it has on your character. With some unreasonably difficult areas only marring the experience on occasion, Spec Ops: The Line is a game is worth playing, even if it’s just to determine how many holes in gameplay a great story can fill. 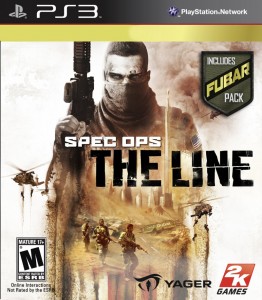