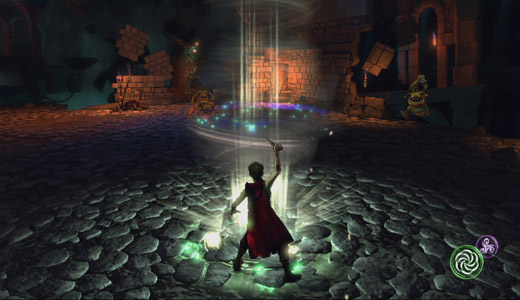 The latest addition to Playstation’s Move collection is Sorcery, which places you in the magical cape of an apprentice Wizard named Finn. Where action and RPG fuse together like Wizard and wand. 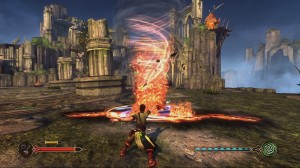 This begins your quest to reach the Slumbering Palace at the heart of the Faery Realm.

As the threat of an Eternal Night looms over mankind you learn that the Nightmare Queen has broken an ancient pact with humanity and unleashes her dark forces to turn everyone’s nightmares into reality.

From humble beginnings at the start of the game your main quest becomes clear once you have got the gist of your spell is all told throughout the narrative of the gameplay.

You must also restore your Tower, your home, from its current ransacked status into a Treasure Room which stores your wealth you amass throughout play.

With the PS3 Eye Camera 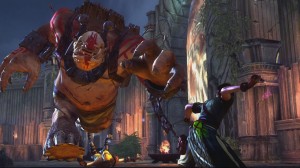 pointing in your immediate direction and a Playstation Move Controller in the other, you will begin flicking your wrist to enact spells of carnage and mysticism to forge your path from Apprentice to that of Merlin wizardry.

Spells, potions and skills will either be learned as you need them or earned by completing a game specific task. They can also be purchased, in-game.

The sensors on the Move controller can react with true reflection of the severity of your actions. More often than not, the might of your wand flicking will increase either trajectory or severity of the spell you are casting.

Asides from the ability to move and manipulate objects, you will harness the power of the elements. Fire, Wind, Ice, Lightning and just plain force with Finn’s Arcane bolt are the basic classes of Spells as well as a repair ability where you can restore once decimated environments, you can mix it up abit by way of using them in conjunction with eachother via your Spell Menu, this gives Sorcery that tasty RPG flavour. 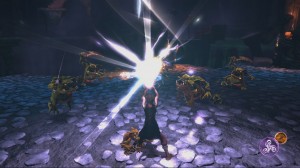 Potions are temporary fixes and can give Finn the ability to physically change into magical creatures. Again, you will use these when the need arises.

In a family friendly title such as this there is a fair amount of combat throughout, to my surprise.

Your enemies are at the extreme of size levels, from the largest you can imagine through to the smallest minions.

Sadly, controlling Finn is not as easy or enjoyable, unless you have the additional Playstation Move Navigational Controller.

Without this you have 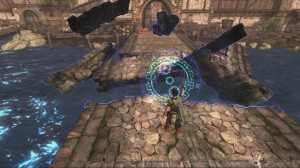 to try and balance the traditional PS3 control pad with one hand whilst utilizing the Left thumbstick to move about. Because of its size, you’ll end up dropping the control pad more often (well I did anyway).

Puzzle based play, fused with Sorcery action to the likes of never before seen nor experienced; Sorcery is a clear winner for the younger gamers of the household, just remember that you will need nearly every peripheral for the Playstation 3 in order to play it, so go for the Bundle option. 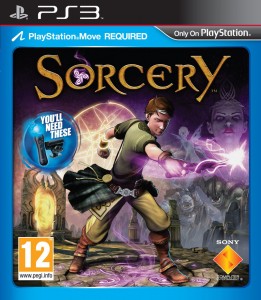