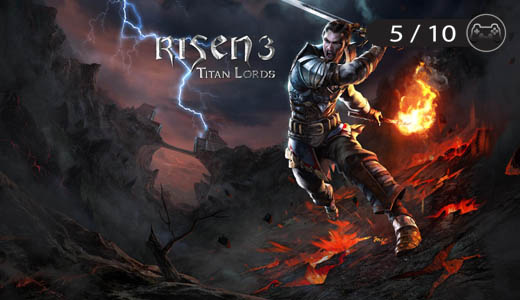 By looking at Risen 3: Titan Lords from the outside it is hard not to be interested. It is easy to see the appeal in a description like pirate themed action-RPG set in a fantasy universe.

Unfortunately though Risen 3 does anything but live up to its potential.

You play as very unlikeable raspy speaking unnamed pirate who is just a completely over the top arsehole. I found there to be very little motivation given for his behaviour and consequently was unable to relate to him. For this reason I failed to care at all for his story or his wellbeing. 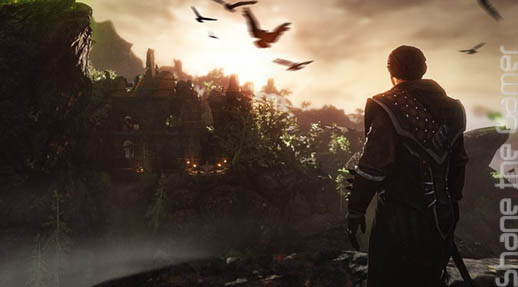 Without giving away too much, your soul gets trapped in the underworld and you must set out to get it back. This aspect of the story is well integrated into the moral decisions of the game. As you do good things, such as helping people out or strangely even just politely greeting someone, you gain soul and consequently hold on to your humanity.

Doing evil things, with the strange exception of stealing because apparently that is okay, causes you to lose soul. This puts you further on the path to becoming an underworld minion which apparently has some perks. Believing my character was already enough of an arsehole without me egging him on, I went the first option. 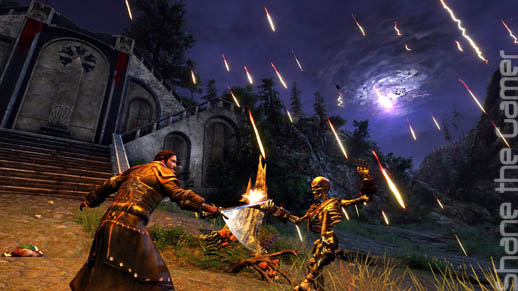 Once the story get properly underway, you get introduced to your first companion named Bones. While your unnamed pirate may win the award for the biggest asshole protagonist in a video game, Bones would be in the running for the most annoying character.

From his atrocious and cringe worthy voice acting to his annoying script involving him making lame remarks about his weird sacrificial fetish at every unnecessary moment, there was little to like about Bones. 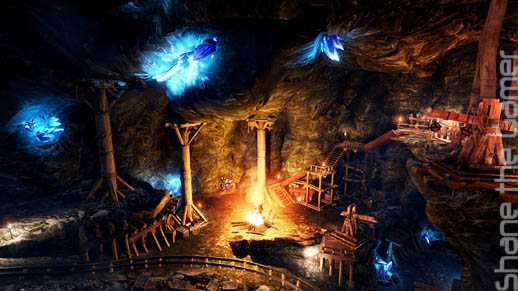 Any optimism I originally had for the game quickly ran out after been introduced to the combat system.

The whole system just seems broken in every respects. To start with your attacks are painfully slow to execute. This makes no sense when considering the very lightweight clothing your character wears as well as lightweight swords he uses. Some of his attacks even involve a slow and unnecessarily spin in the lead up. 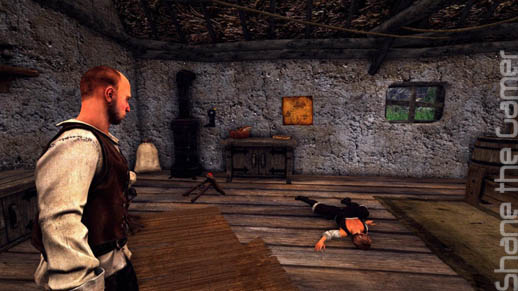 Even once your attack connects you will find that it does very little damage against even the weakest enemies. The enemies on the other hand both deal comparatively massive damage and are able to attack much quicker. This creates a common scenario where you will launch an attack first only to have it interrupted by a much faster enemy.

You have two basic forms of defence, a roll and a parry.

The parry is able to block most enemy attacks and theoretically allows you to launch a counterattack once your enemy has launched their combo. In practice however this strategy doesn’t work very well as you are often pitted against multiple enemies, you don’t have time to get many attacks in and enemies can often behave sporadically. Doing a roll on the other hand makes you invincible to enemy attacks and actually seems to make you travel faster than running. 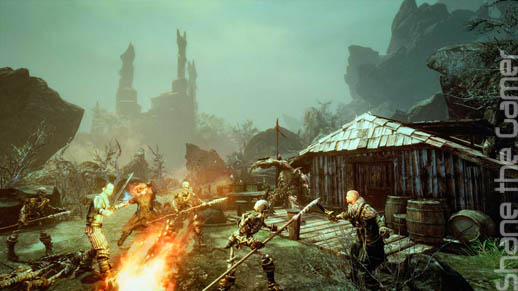 Your main advantage in combat is your companion who can both absorb and dish out more damage than you. I found myself exploiting this advantage a lot.

In one situation where I was low on health, I just continued to roll around while my companion very slowly took out 4 skeletons, an alligator and a weird bird. It took a while but it ensured I didn’t die and I had much more fun rolling around than I would have participating in the broken and frustrating combat. 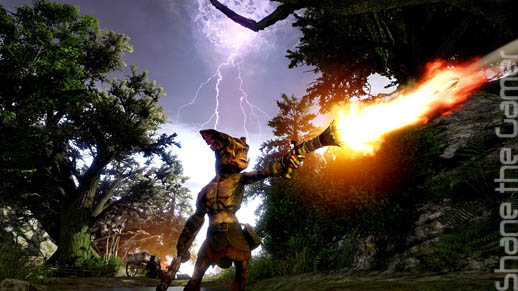 About 8 hours into the game I did something I have never done in a video game before, I changed the difficulty to easy. This didn’t make the combat any less broken or frustrating but I felt I wasn’t being punished as much for their bad game design.

You can choose the companion that tags along with you amongst the crew which you gather along your journey.

For unspecified reasons you can only choose one companion at a time while the rest stay idly at your ship. The first crew member you unlock, Bones, can heal you when your health is lower than a certain point. The reasons as to why he can’t just heal you to full health outside of combat does remain a mystery. Because of this healing ability though, I found very little reason to bring anyone else along with me. 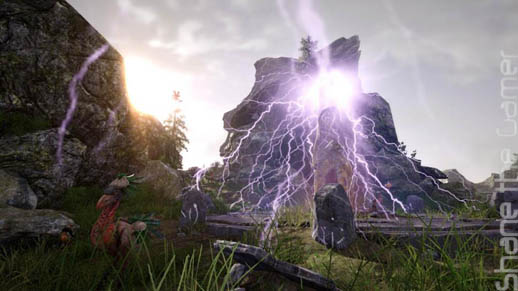 Probably the only thing I did enjoy about the game was the large variety of enemies.

There is a great mix of real animals and unique fantasy type creatures. Each enemy attacks differently and has a vastly different attack speed and damage. I also liked how native animals are generally territorial rather than just straight out aggressive, choosing only to attack you when you come too close. 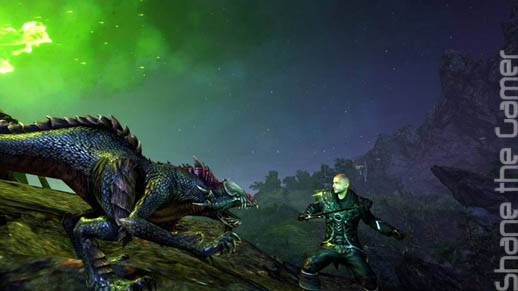 I found the skill system to be badly designed.

You gain Glory points from exploring new areas, completing quests and killing enemies. You can then spend these Glory points on Attribute points which in turn increase a variety of different skills. A problem I had with this is the skills seemed broken down into too many pieces for no apparent reason. For instance instead of having a single skill for all swords, it is split up into three different categories. 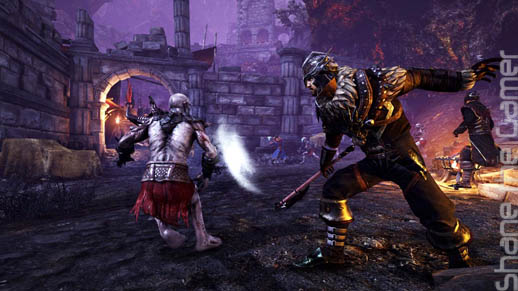 Regardless of the category, I failed to find any practical difference between the sword types.

Another problem I had with the whole skills system is the integration of abilities. Unlike most RPGs, abilities in the game such as the various types of crafting are unlocked by finding the relevant NPC in the game and paying them a large sum of money.

Many of the abilities are linked to having a specified skill level meaning if your level is too low you will have to try and find the person later. Similar to skills, I found there to be way too many types of abilities which felt too similar. I also didn’t like that gaining a skill was linked to finding someone who teaches it to you rather than some leveling up system that can be done in a menu. 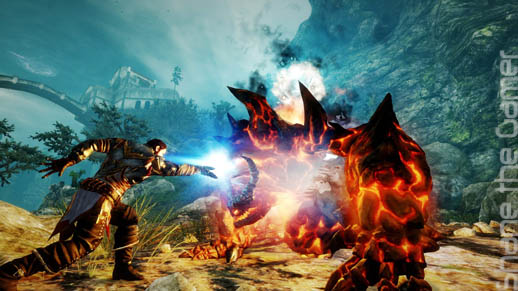 Although I played it on PC, I found the level of graphical detail in the game to be very poor and outdated, probably as a result of this game also being on PS3 and 360.

The environments still generally appear to be pretty and colourful despite this poor detail. There is a reasonable amount of variation in the environments from tropical forests to beaches. The Level design however is sub par with the large open islands feeling more like just a series of linear interconnected paths. 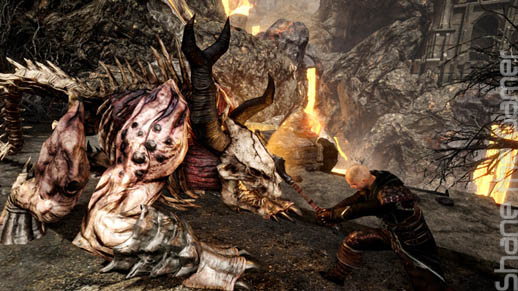 In summary, there isn’t much I liked about Risen 3: Titan Lords. The combat is atrocious and frustrating, the story is not engaging, the RPG elements are poorly implemented and the graphics are outdated. Do yourself a favour and steer clear of this one.