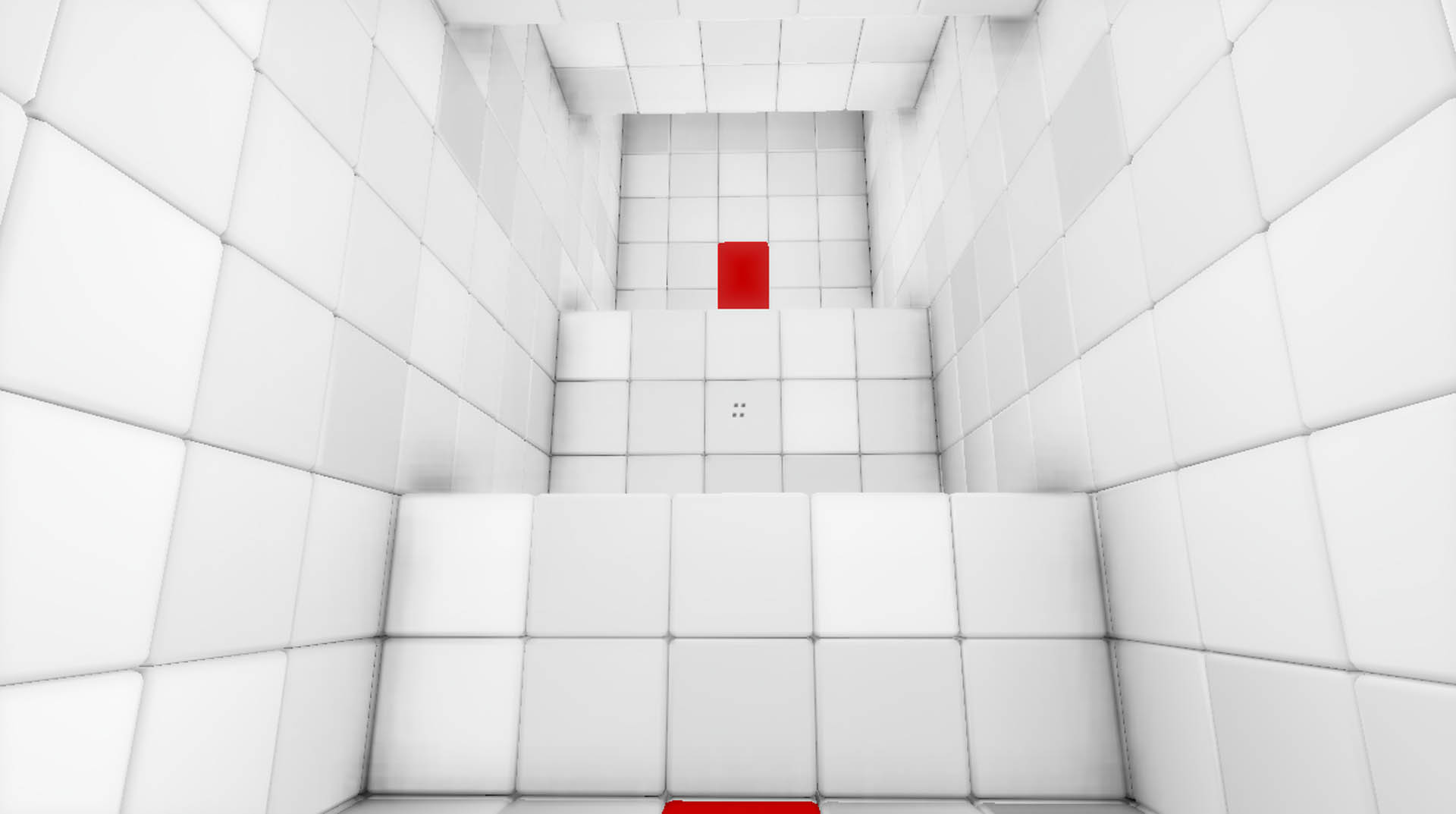 Imagine waking up in a strange confined space reminiscent of a mental-asylum with no memory of who you are, no idea of what is going and an unfamiliar female voice being your only guide. Can you trust her?

This is the situation you find yourself in when you begin Q.U.B.E, a puzzle game that feels very much inspired by one of my favourite games of last generation, Portal. Unfortunately though it falls well short of the game it seems to be inspired from in both its puzzles and its story.

The premise, at least from what you are told at the beginning, is that a large structure is on collision course with Earth. Your job is to stop it before it crashes into the planet and destroys humanity. To do this you must keep solving puzzles which, for reasons unexplained, seems to destroy the structure. To make matters worse, you have lost your memory and therefore you must put your trust into the voice being broadcast. 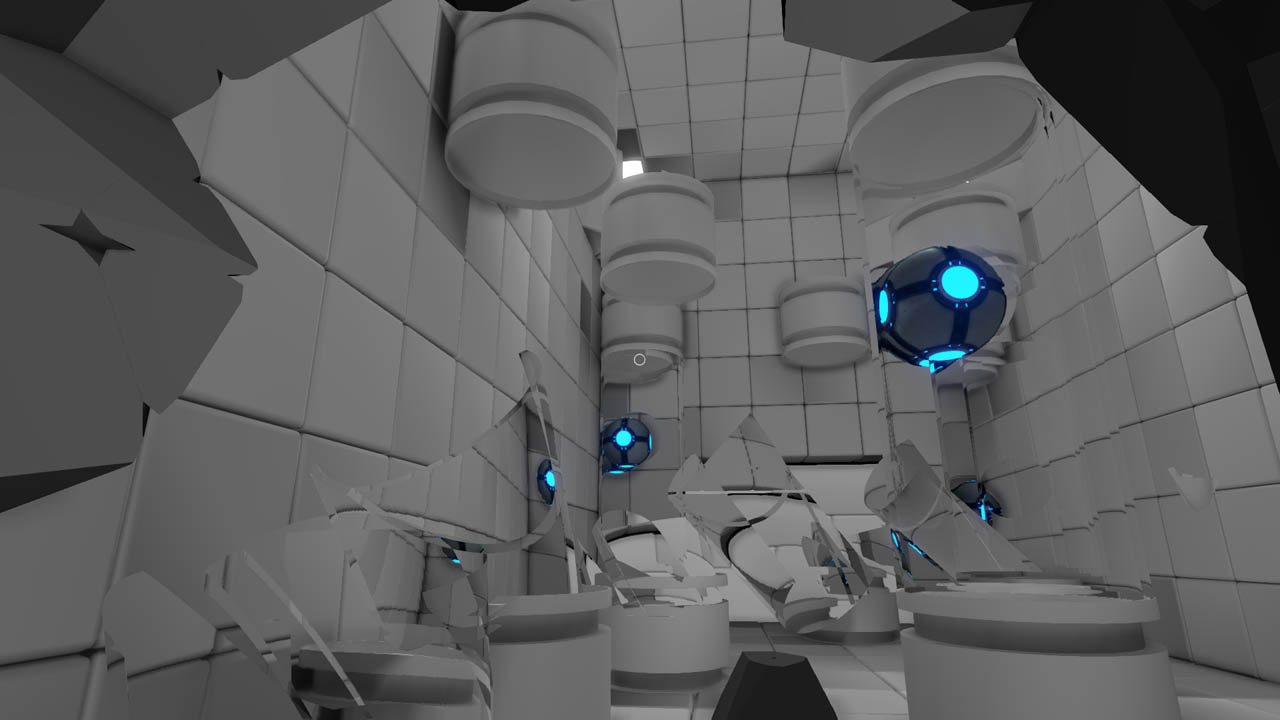 The story initially starts off slow and unengaging, however picks up later in the game. Things start getting interesting when you begin to receive broadcasts from another voice who tells you things aren’t what they initially seemed. From here you are left with a conundrum of not knowing who to trust.

The potential of this conundrum isn’t fully realised as your character is never provided with an opportunity of choosing a side. In one situation, the conflicting voices tell you to do two different things, despite this you aren’t actually given a choice and instead must take a predetermined side. 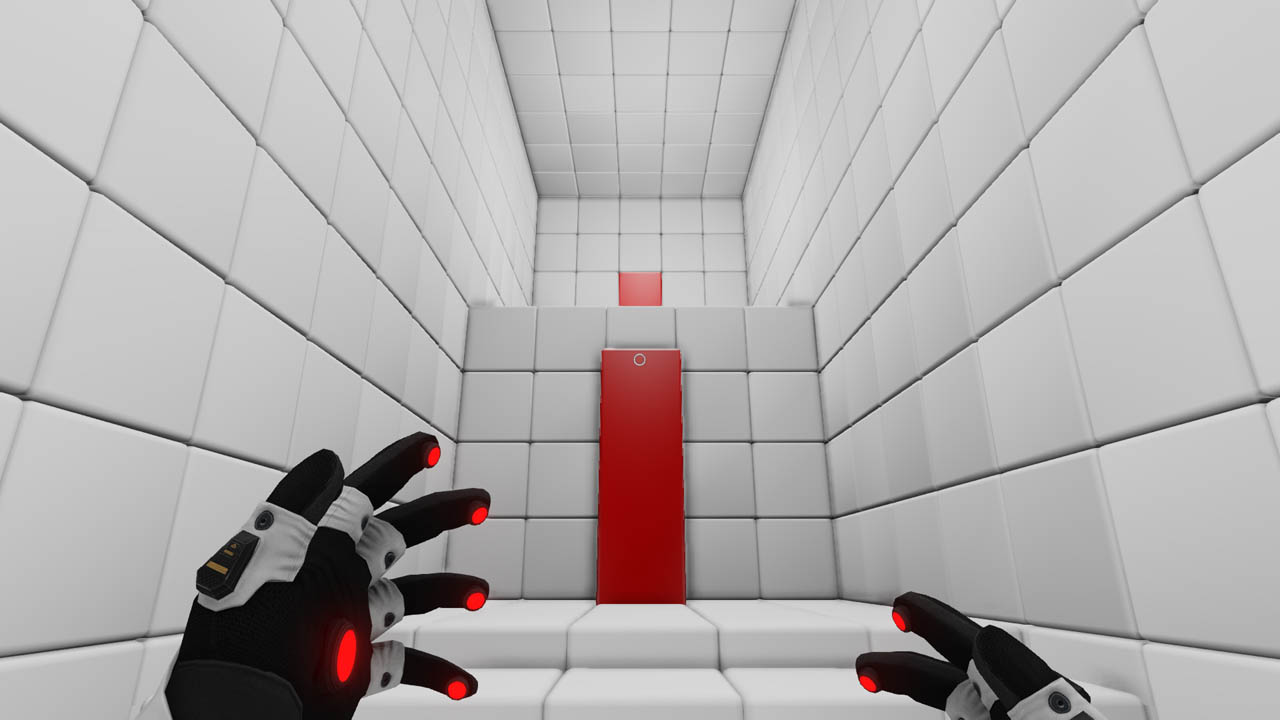 Throughout my time with Q.U.B.E. my over-analysing mind encountered several things that just didn’t make any logical sense.

While in most games such things don’t usually bother me, the serious tone and the focus on story made it a big issue. My hopes that these would somehow be explained at some point was to no avail. Instead things are left vague and open to interpretation. While leaving some things open can certainly add to the experience, I felt that many of these things had no possible explanation that would make sense. 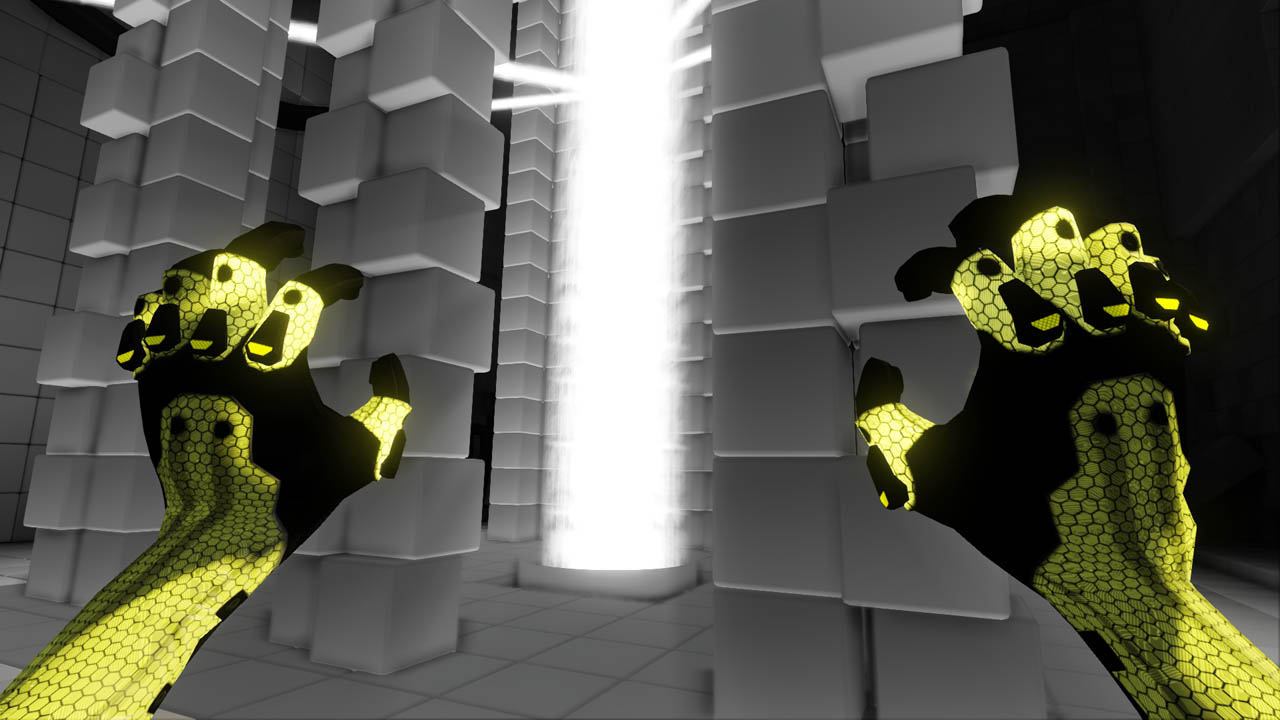 Your character is given unique gloves that allow him to interact with special colourful cubes that are littered throughout the structure, forming puzzles. There are different coloured cubes and certain colours allow for certain usages. For instance red cubes, on interacting with them, can be used to pull a set of cubes out of the wall to a certain length. As the game progresses new coloured cubes are introduced to provide more variation and complexity to puzzles.

By combining these cubes’ abilities, you must find a way to enter the next room. I was continuously impressed at the innovative ways that the developers combined these seemingly simple mechanics to create such a large variety of puzzles. 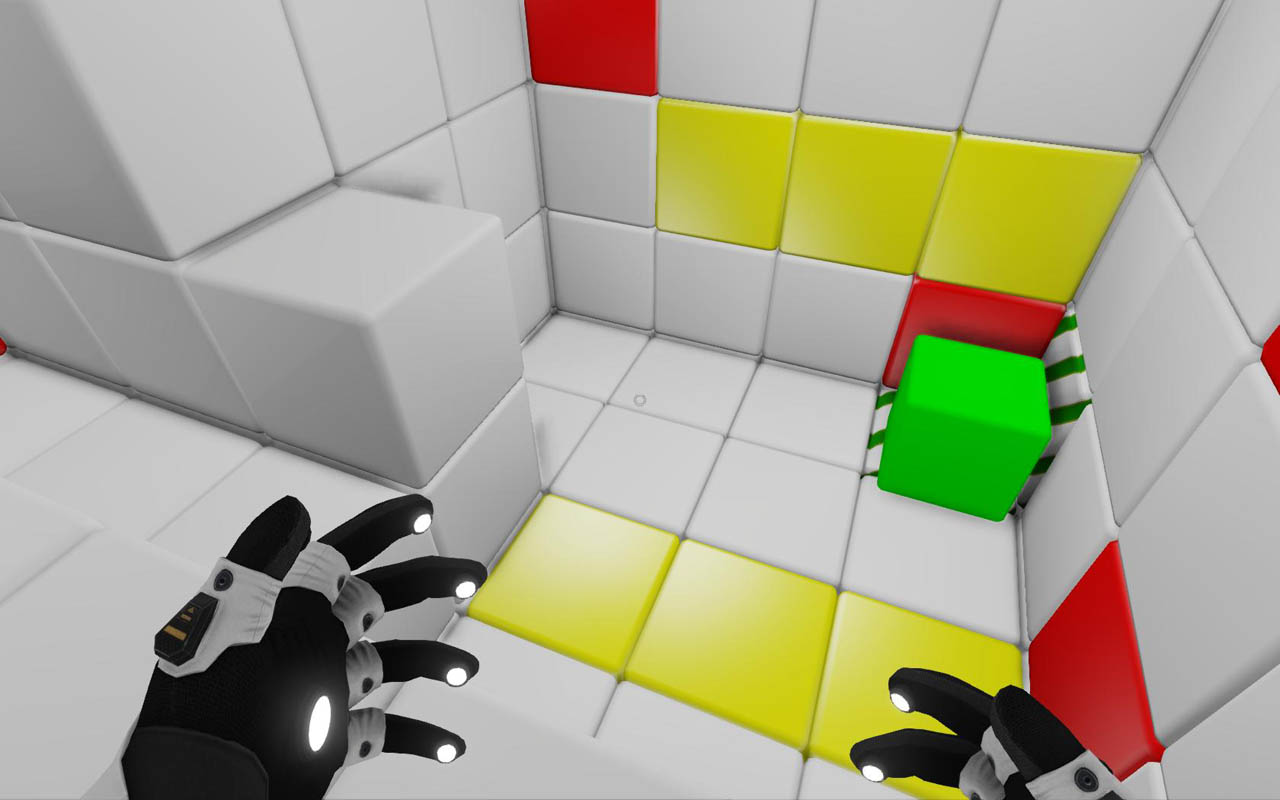 One such display of creativity is in one type of puzzle which feels more like a game of putt putt golf. The objective of these types of puzzles is to use the coloured cubes to navigate a moving ball into a particular hole. While sounding simple, these types of puzzles prove to be one of the more complex, especially towards the later sections.

At one point in the game, you unlock the ability to be able to choose the colour and hence ability of particular blocks. The added level of complexity this brings made the puzzles after this point dramatically more enjoyable than those that occurred before it.

For a game with such a heavy focus on puzzles, I found them surprisingly easy to solve. While a few required a bit of trial and error, there weren’t many that were truly testing. This seems to stem from the simplistic puzzle mechanics involving cubes which can only be used in a small number of ways. 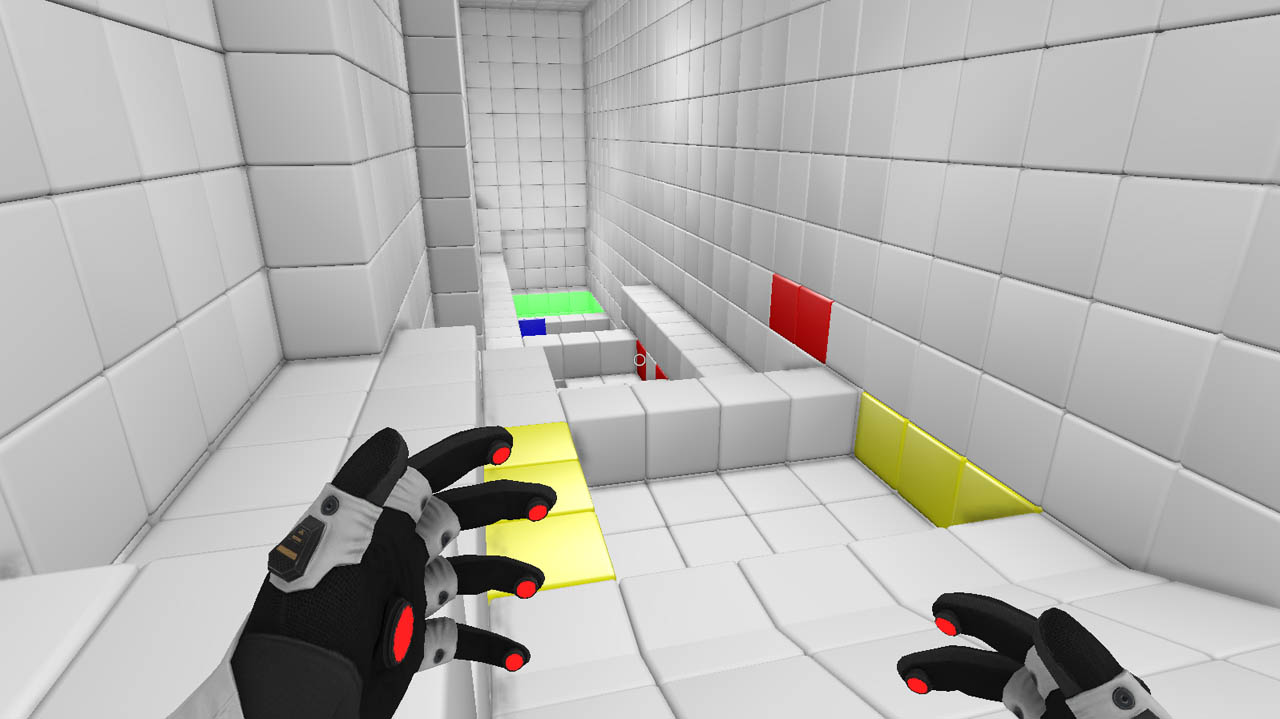 Rooms in the game are predominately made up of plain white cubes with the very colourful cubes you interact with standing in stark contrast. This visual style gives off a mental asylum vibe, something that plays very well the story. While the music would be great by itself, it also does a very good job of complementing what is happening in the game.

The most interesting aspect of Q.U.B.E. is the story.

Even this however doesn’t to live up to its potential by leaving many questions unanswered and failing to provide players with a choice to the conundrum they are given. While the puzzles are certainly creative, they fail to provide the difficulty one might expect from a puzzle game.

For a cheap price, Q.U.B.E is worthwhile game to play, especially for fans of the Portal series.