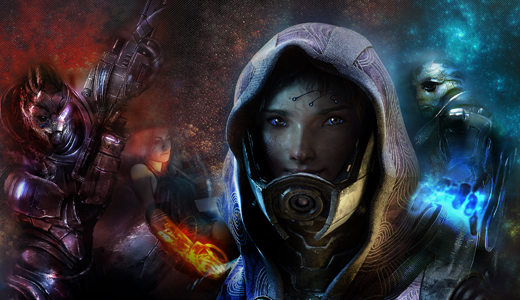 In case you have been living / gaming under a rock for the last several years, you are probably well versed with the Mass Effect series – or at the very least have heard of it.

In a nutshell, you take on the role of Commander Shepherd, singlehandedly charged with rallying the universe into an alliance against the Reapers, a race of space nomads who leech other planet’s resources for their own diabolical purposes.

The game launches with Earth 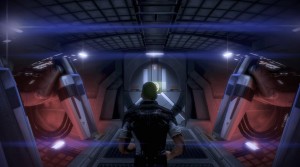 under heavy attack by the reapers, and hope appearing all but futile. Commander Shepherd steps in to save the day – again, charged with the responsibility of forming an inter-species alliance.

To amass a large enough group, Shepherd and his crew casually bounce from system to system, solving inter-species personal conflicts, running errands and changing attitudes in order to get everyone playing amicably alongside one another.

But before any action commences, you first have to set up the meta-game, starting with how you actually want to play the game. Since conversation threads constitute a large portion of the gameplay – swapping these sections out for automatic cut scenes seems to defeat the purpose. I’m not sure why anyone interested in the Mass Effect franchise would want to experience anything less than the game’s intentions. 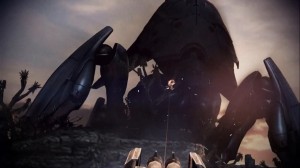 are then prompted to either import your character and traits from previous ME’s or customize a new one.

It works as an elaborate ‘class’ system – where you can choose your ability based classes which have various strengths and powers (biotics) attributed to them.

Your position aboard the Space Shuttle (SS) Normandy as Commander extends to human resources as well and throughout the game you have a habit of employing new staff whose jobs seem to be perpetually standing around staring at holo-computers and whining to Shepherd. Cynicism aside, it does bring life to the Normandy and helps maintain a real sense of personality to the games cast.

Like many third person shooters, the core action has been borrowed almost without fault from the Gears of War handbook. All of the cover mechanics are in place as well as vaulting and sprinting and melee. Swapping out weapons or abilities are achieved by calling up a selection wheel while the game pauses. You can map certain frequently used items to face buttons if you prefer to not stifle the action. 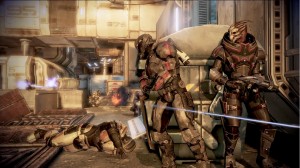 Throughout the course of the game you gain experience points which can be used to assign upgrades to active and passive abilities, and credits to purchase hardware such as weapon attachments, collectables, armour etc.

It’s imperative to ‘level up’ according to your play style as the difficulty does spike in certain areas, particularly in the later stages of the game when enemies emerge wrapped in several layers of hard-wearing shield and armour. It also becomes gradually more important to use your squad in combat strategically.  Although their AI is robust enough to work autonomously, squad mates sometimes don’t have the sense to retreat when overwhelmed and end up injured, leaving you to waste precious medi-gel reviving them or handling the battle alone.

As the token for the Mass Effect series, the game is very talky and you’ll be engaged in many conversations with branching dialogue trees (the Xbox 360 version supports Kinect chat). The dialogue path that you choose and your interaction with NPC’s largely determine your reputation status – either as Renegade (badass) or Paragon (saint). These paths are fairly arbitrary unless you really care about how certain side missions play out.

Some of these side missions feed back into the overarching story, some are purely reputation building, and some reward credits or hardware. In any case, I found many of these side missions a little drab, particularly the liaison missions on the citadel. Some however, have you exploring entirely new sections of the vast galaxy which is great for breaking the linear and predictive flow of the core story. 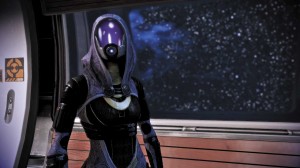 where certain planets can be scanned for resources, ME3 expands a little on this element.

Instead of having to enter a planet’s orbit in order to scan, you scan sections of the system you are in, and if a nearby object is found on radar you travel into orbit in scan directly. The caveat here is for every system scan reapers are alerted to your presence and eventually come after you. It’s a novel addition to the mini-game that fits the context of the ‘galaxy under siege’  premise.

Online Multi-player is a big aspect of ME 3. Players do not get to choose characters from the Single Player Mode and can only carry two weapons at a time. This co-op mode is called Galaxy at War which allows you to buddy up with three others within unique to online Missions that effect the Single Player campaign. 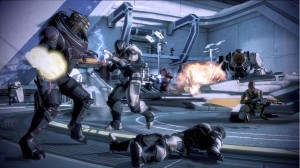 gorgeous with plenty of effects to drench the screen, but comes at a cost in certain portions of the game. Sometimes the framerate, particularly in cutscenes, takes a nosedive and there are some fairly low-res textures and pre-baked shadow effects to emphasize the graphics / performance compromise.

Otherwise, the world’s you traverse are teeming with atmosphere and forlorn beauty, even if the geometry isn’t overly exciting.

ME3 is a definite step forward in the series, even if everything is starting to feel a bit too familiar by this point. The series has often suffered the lack of polish on consoles, but this iteration has definitely improved, making it the best and probably most accessible mass effect to date.

Even if you aren’t a fan of RPG games, the fairly lightweight RPG components make it accessible even for action fans, and ME3 should be at least given a chance.

I certainly enjoyed it. 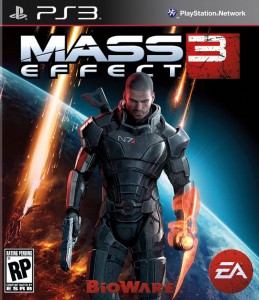