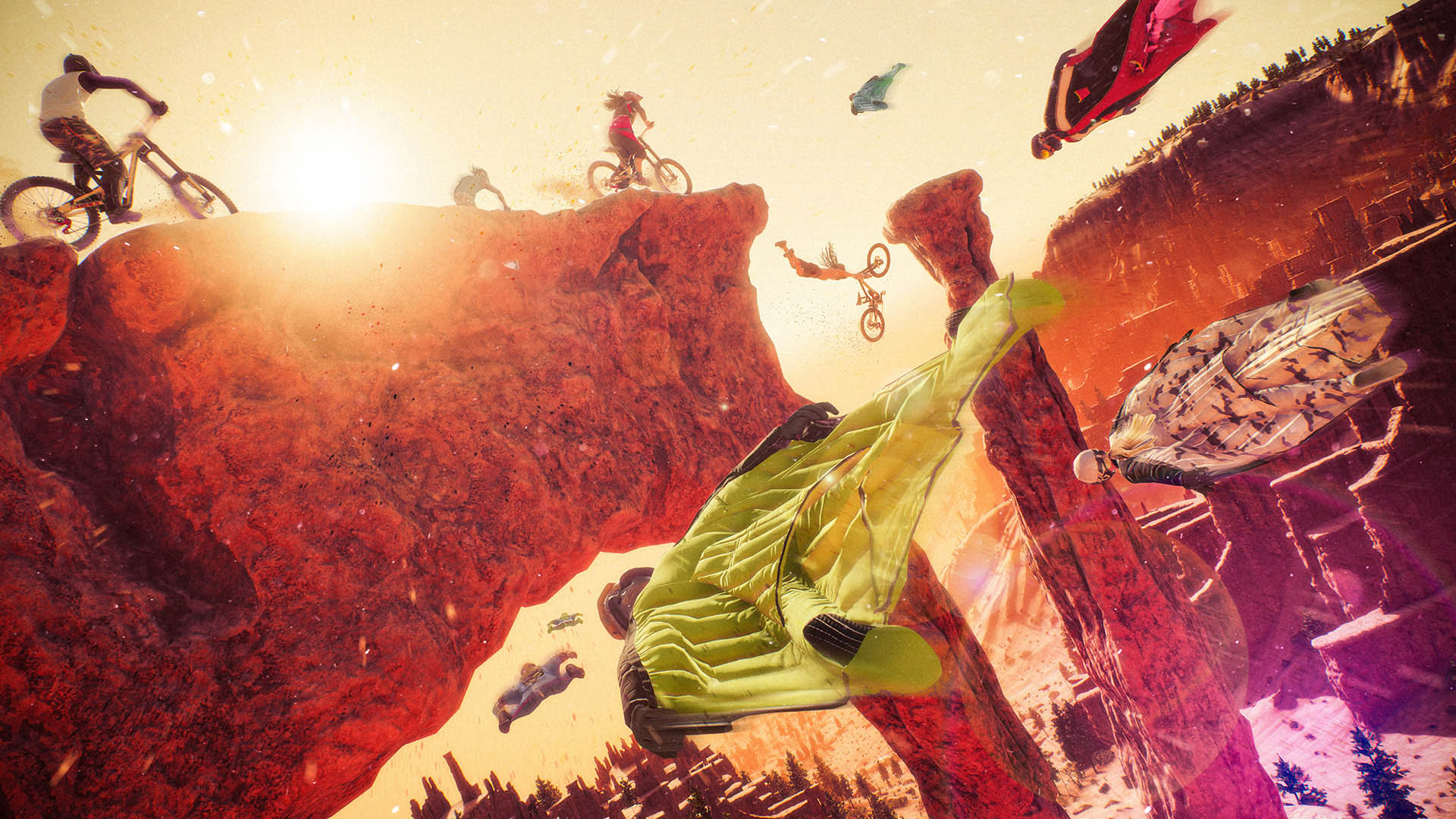 Ubisoft’s snowboarding / skiing / wingsuit / jetpack game, Steep has been a bit of a go-to game of mine since its release back in 2016. Riders Republic is more of the same, but with a bigger and more varied area and a few more extreme sports thrown in for good measure.

The Riders Republic is a place where extreme sports fans congregate to partake in races and events as well as just hang out. The massive open landscape is an amalgamation of various US national parks like Yosemite, Brice Canyon and the Grand Canyon. 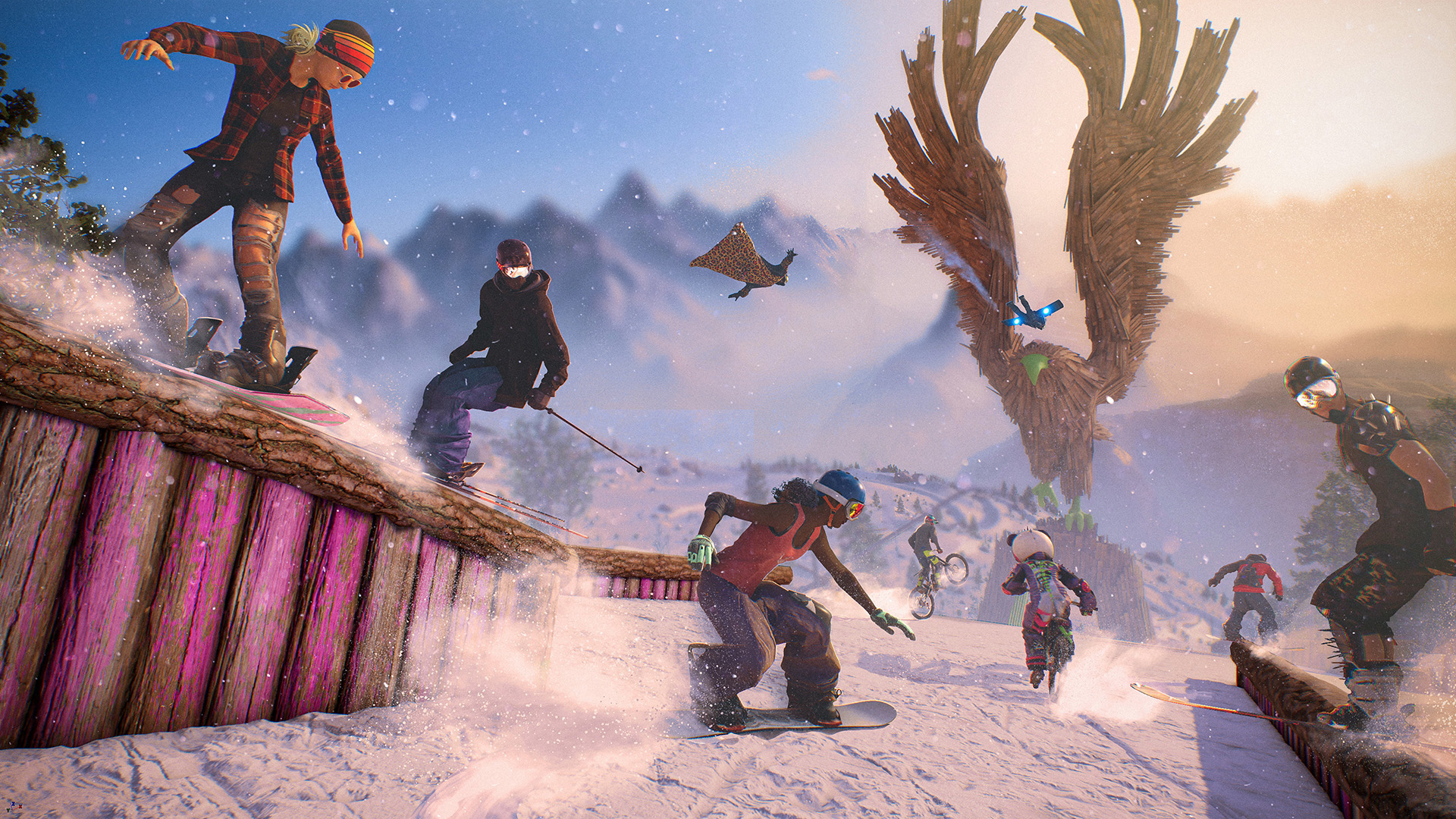 It’s a playground where players can just whizz around on skis, snowboards, mountain bikes, jetpacks, wingsuits and paramotors. Players can also embark on any one of the available career paths entering the events scattered across the diverse terrain. Ubisoft has thrown the kitchen sink at this one. What other game can you race downhill on a bike with a dude in a jetpack roaring past your head?

The cycling in Riders Republic is absolutely exhilarating and surprised me in being possibly the highlight of the game. Players get to control pedaling, boost, brakes (including sliding around tight corners), jumps and trick combos. 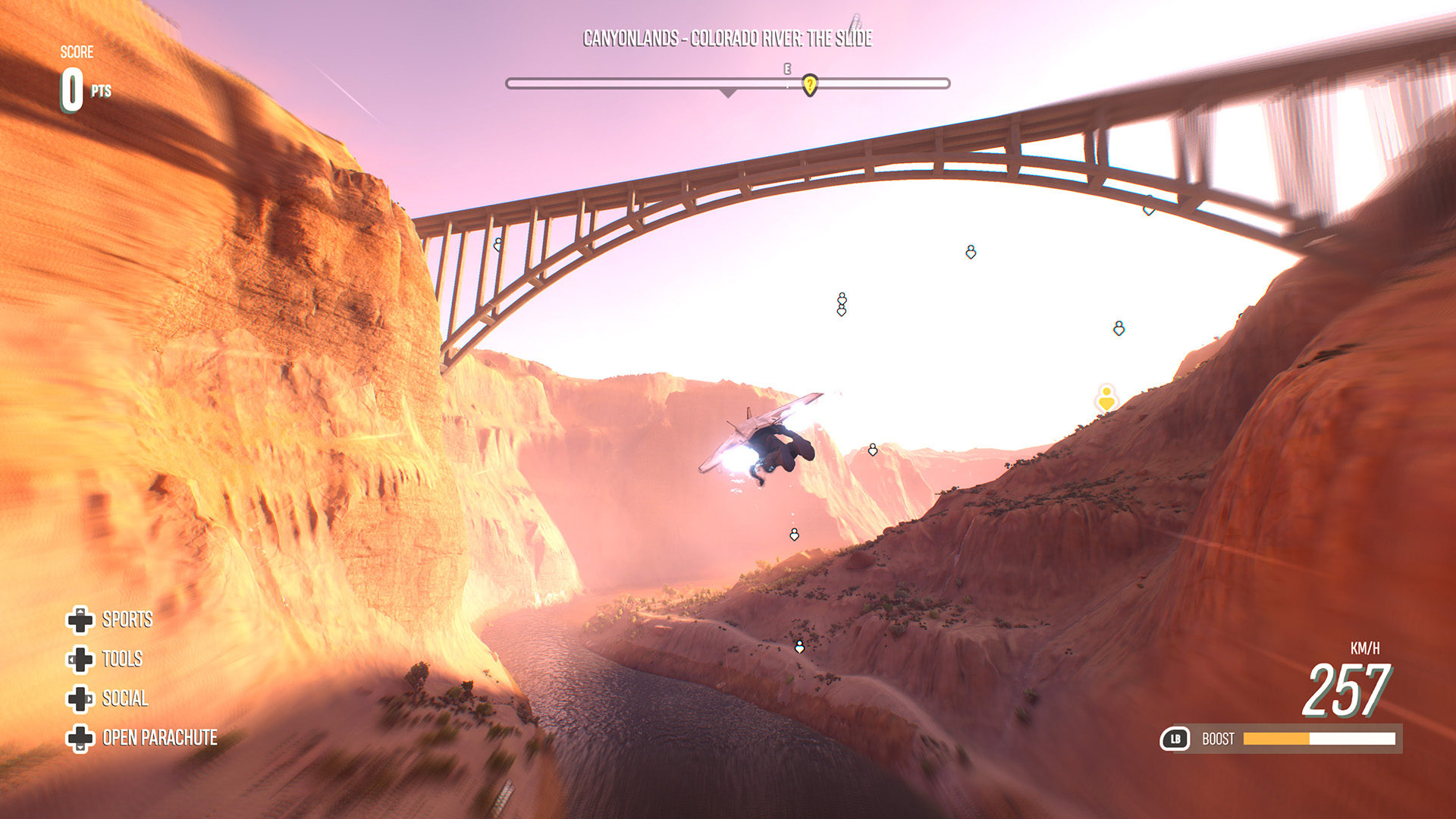 Riders Republic is a title that is about three or four extreme sports games all in one. And, if Ubisoft Annecy’s Steep is anything to go by, this is just the start. As content-packed as the game is right now, it’s likely more of a starting point, a platform onto which the developers will build the ultimate extreme sports simulator.

The breathtaking world of Riders Republic is the star of the game. It’s massive for a start, with snowy mountain peaks, through lush forest and onto the desert. It takes a good 40 minutes on skis and a bike to go from the top of the map to the bottom. It’ll take 5 minutes to cross even with a rocketwing. The terrain, with deep snow, packed ski-runs, dusty tracks and roads, is primed for jumps and stunts as well as some ridiculously fast downhill riding.

The diverse landscape is fun to just explore, away from the wild races. Unlockable equipment like the paramotor allows players to chill out taking in the sights from the air at a slower pace. There are several novelty rides to unlock, perhaps the most useful being the Skidoo, for reaching out-of-the-way places and, of course, travelling uphill. 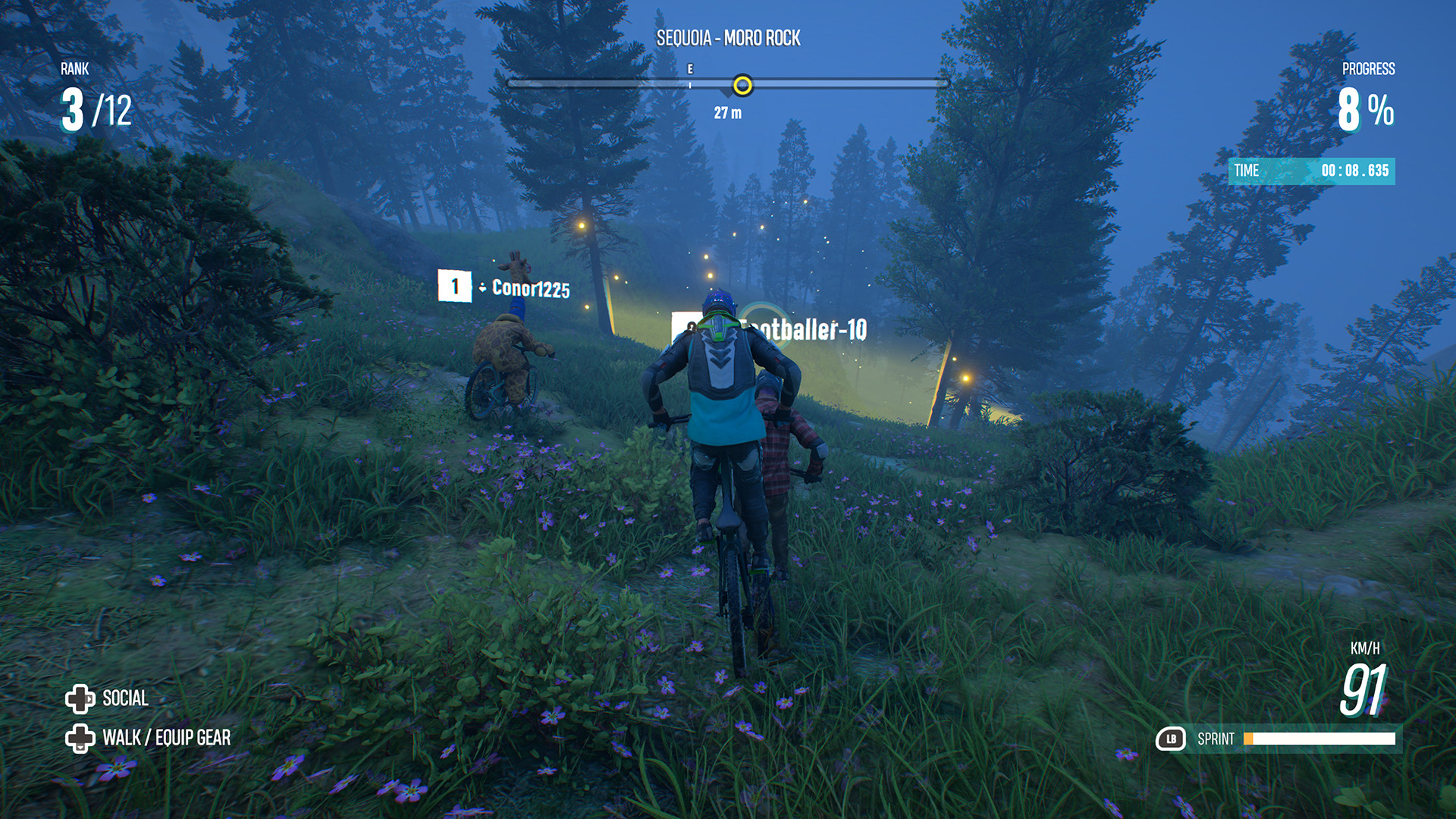 The terrain is peppered with events, collectables (including a few interesting rides) and landmark views to unlock. I spent hours just riding around casually enjoying the scenery. The game even has a Zen mode just for this purpose, enabling players to enjoy the sublime riding mechanics without the distraction of competitive career progression.

But the game is really all about the racing and trick events, and they are incredible. The game is divided into five career paths: bike racing, bike tricks, snow racing, snow tricks and air. These events consist of point-to-point downhill races, checkpoint races, circuits and trick competitions on bikes, snowboards, skis, wingsuits, rocket wingsuits and paramotors. 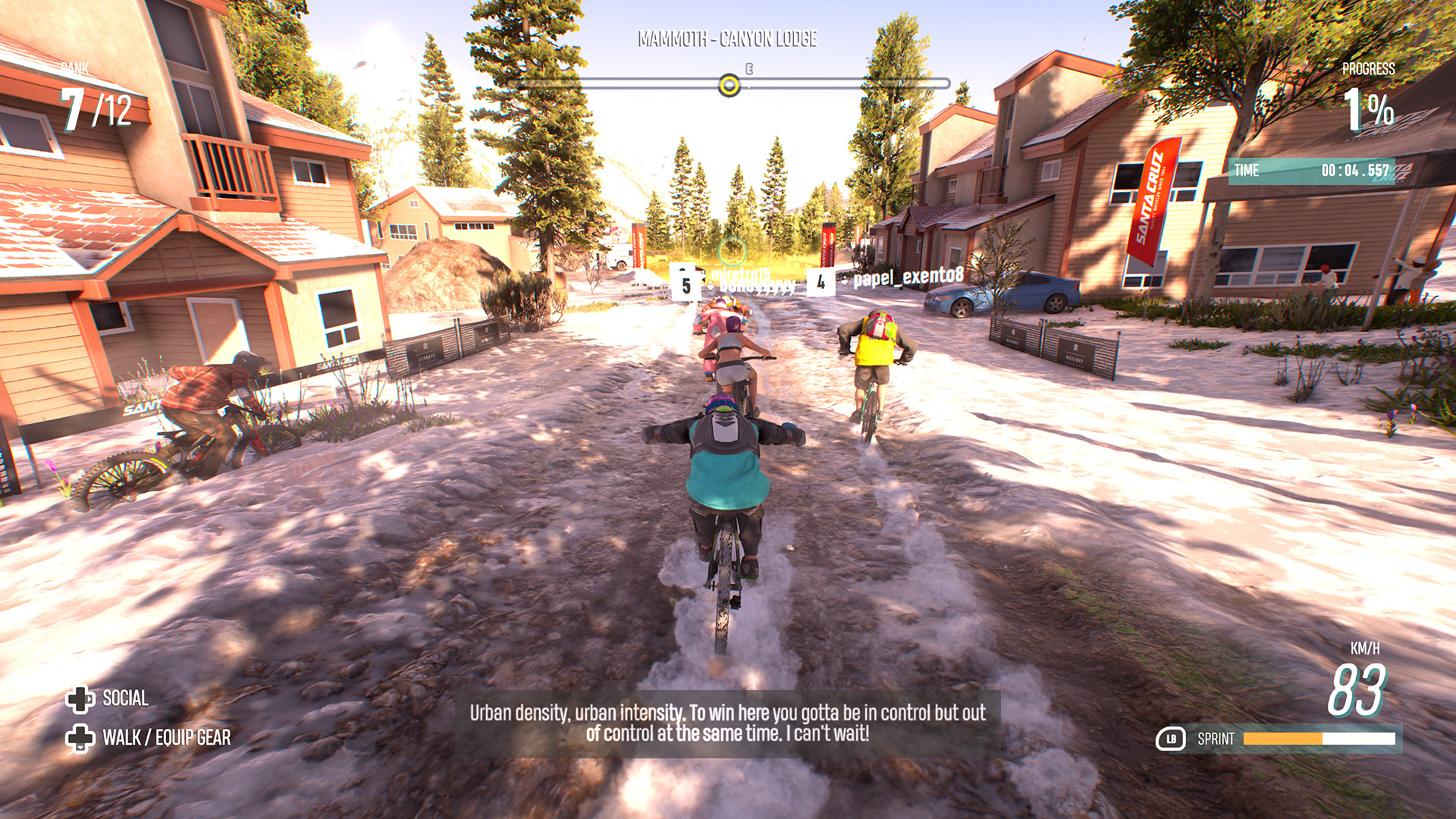 Races use checkpoints to keep players on the course, but it’s easy to miss a checkpoint or leave the track entirely. The game features a rewind button useful when you make a mistake, although you may be penalized and miss out on extra stars for event challenges.

Cycling events cover mountain-biking, street-racing, and stunt events. Some of the downhill mountain bike tracks are almost vertical, but still with switchback curves and gut-wrenching jumps. It’s almost irresistible not to perform a flip or go no-handed with every jump, even when the aim is to get the best time and not the best air.

Snow events feature snowboarding and skiing, both performing tricks and speed runs. The snowfields are fast with opportunities for massive big air moments. As with cycling, there are plenty of tricks to learn, most of the skill is in ensuring that the rider is facing the right direction and the right way up as the ground fast approaches. Skis and snowboards negotiate deep drifts, packed snow, ice, and slush; each with their own sliding characteristics. 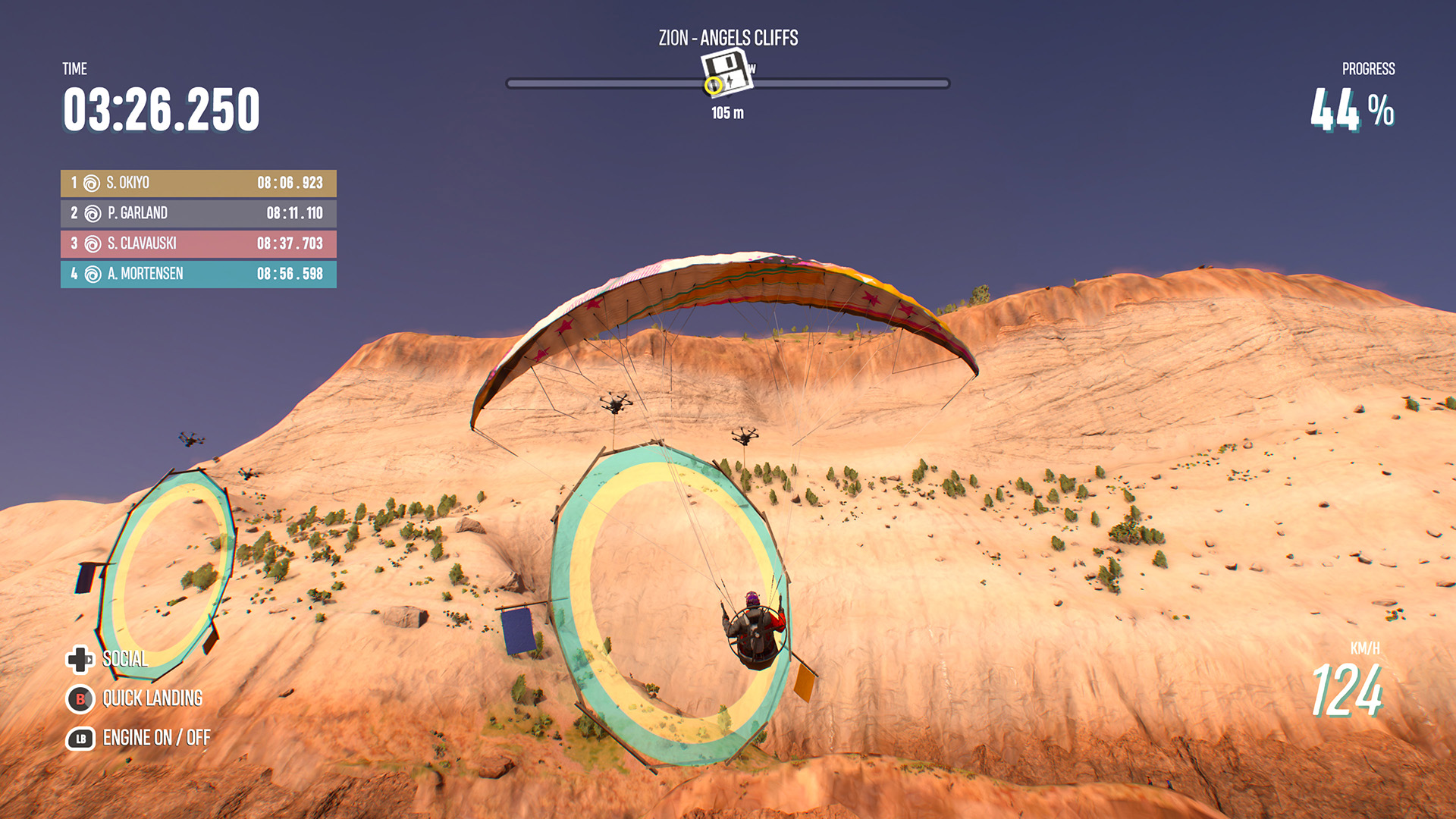 In the air, the rocketwing and wingsuit allow players to negotiate the vast terrain at breakneck speed. Aerial events have players weaving between rocky outcrops, trees and sometimes the ground only a hairs width away.

As well as the above, Shackdaddy events add a little madness to the proceedings with novelty events and special rewards. These feature crazy rides like racing a cardboard wingsuit in your underpants.

Some events are time trials but others are races with multiple AI riders or those from your multiplayer group. The events make full use of the game’s day / night cycle. With events at sunset and sunrise, as the sun’s rays shine through the trees being my favourite times. 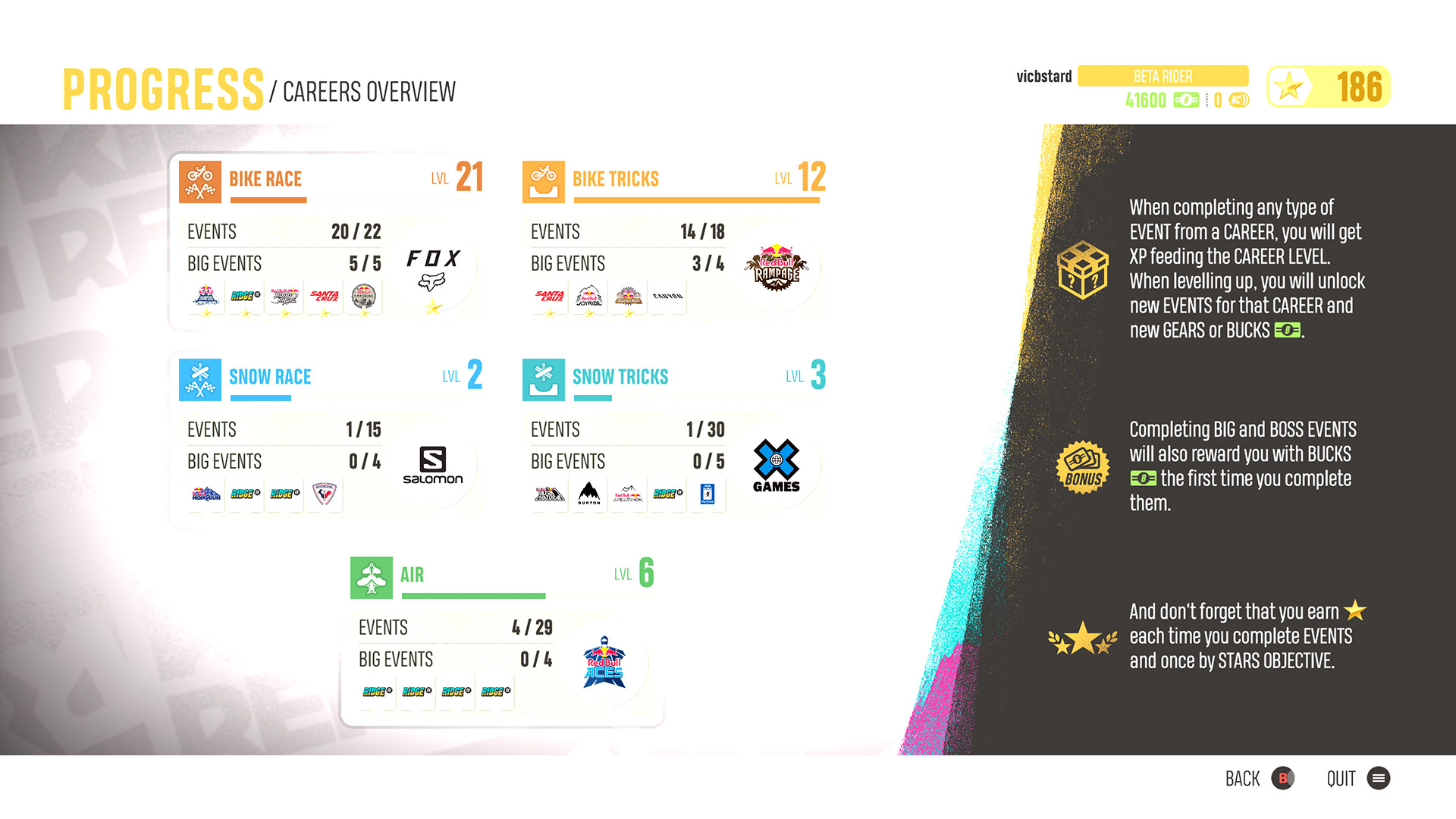 The game looks fantastic. The aesthetic is slightly mad-cap, and thus suits a not altogether photoreal visual style. The dawn and dusk light looks amazing, as do the atmospheric effects like fog and dust. Riders are expertly modeled and the tricks and stunts convincingly animated. The game features some of the most painful-looking rag-dolling you’ll ever see.

The career paths are peppered with special events and boss races. These are usually epic routes with big jumps and fast downhill sections.

As well as races dedicated to particular career paths some events have multiple racing disciplines, with equipment switching during the races. An extreme jump on a bike may transition into a rocket wingsuit stage before switching back to a bike or skis, etc. 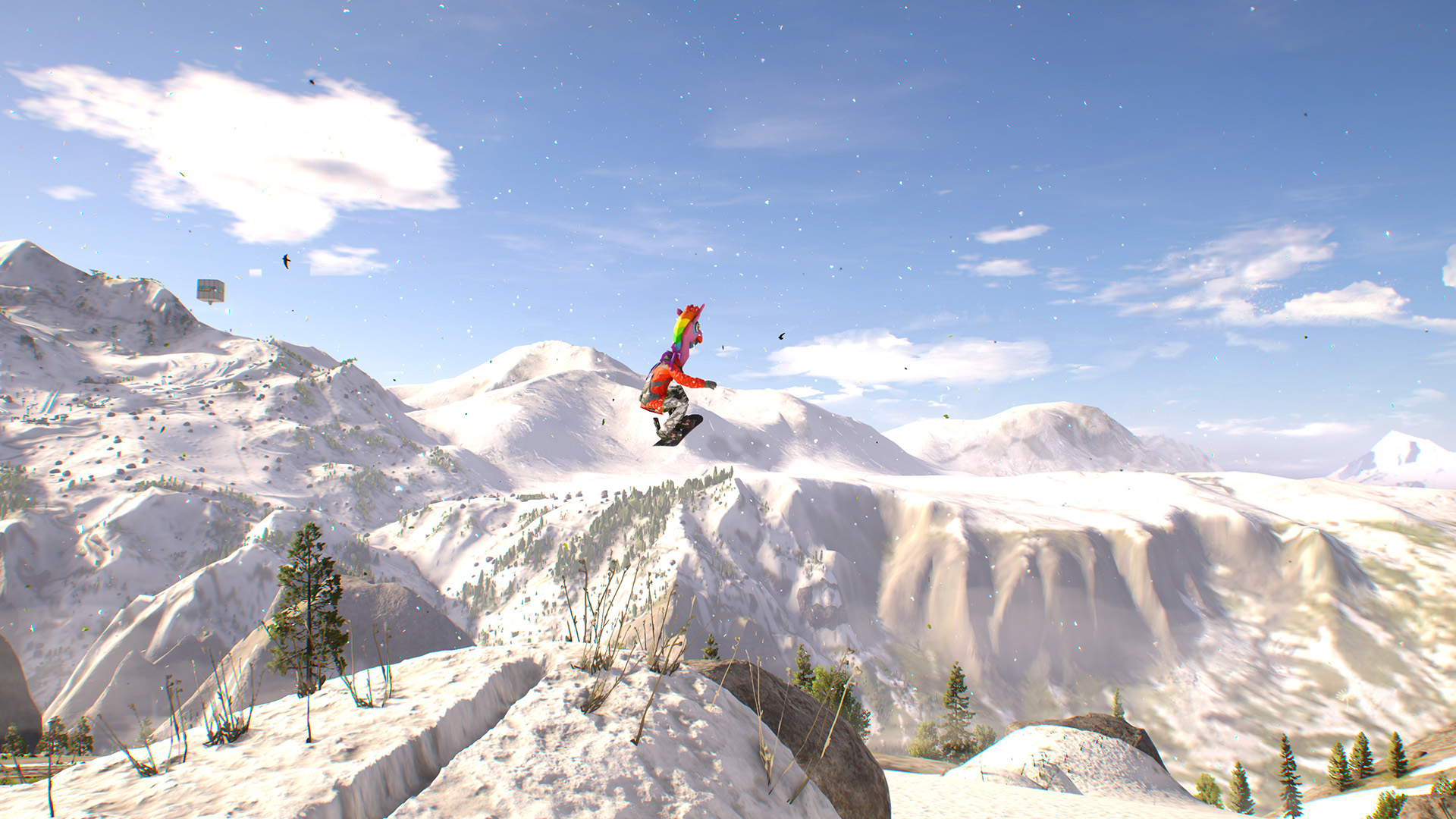 Players also have the opportunity to try events created by others, or make their own challenges in create mode. This allows players to record their trails and publish them.

The huge environment is actually an online multiplayer lobby. Most of the other riders are AI, but there are also a handful of real players in there with you.

This allows for some casual riding with friends just for fun.

Players can group with other players and race together for all of the events, but the easiest way to find real-life opponents is via mass races. 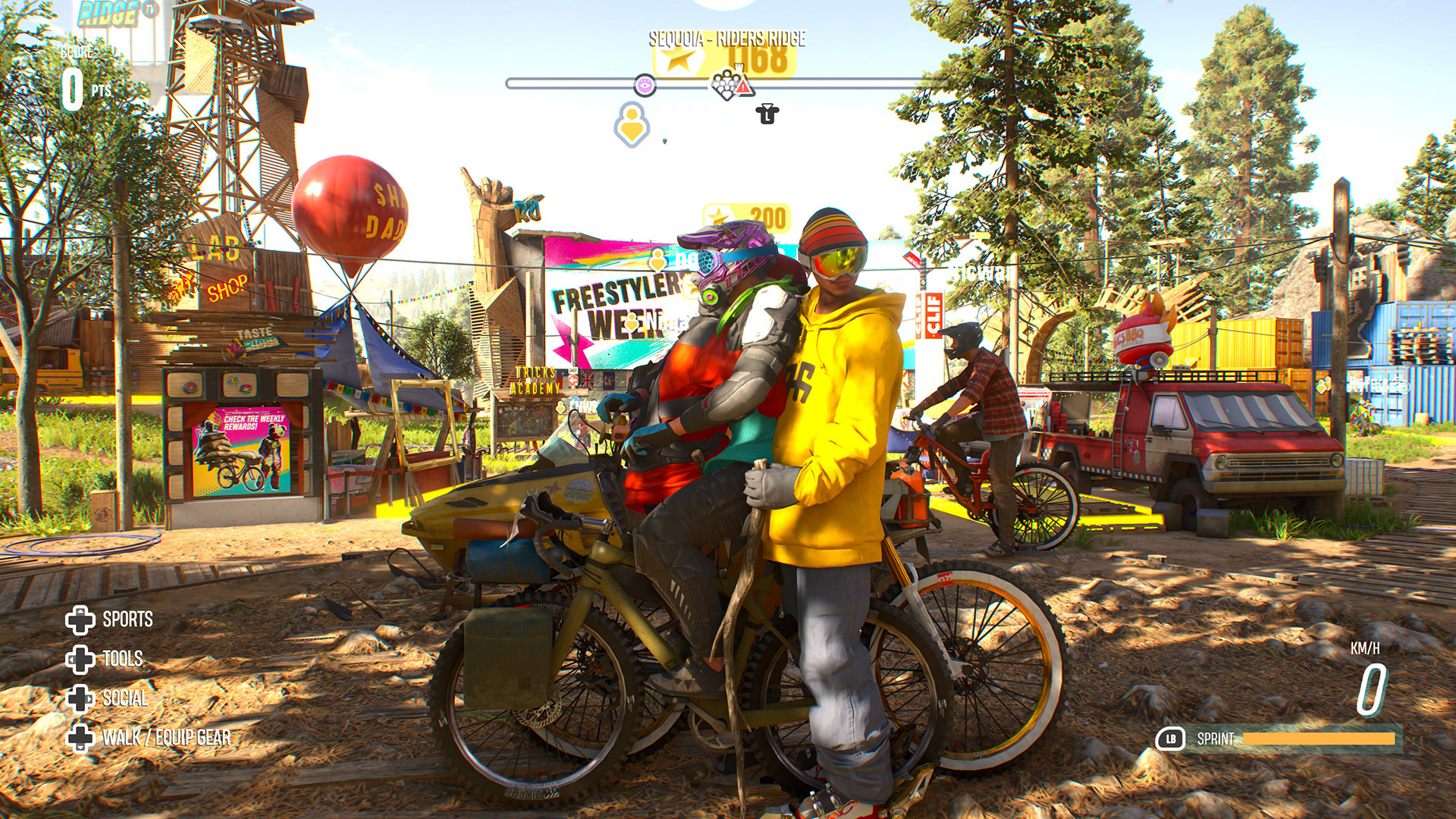 These are held regularly in the game and accessed seamlessly. Mass races have a gaggle of players all competing in special events. They are crazy races with players jostling around the tight tracks, across hazardous snowfields or in the air.

If I had to describe Riders Republic with one word it would be breathtaking. From the speed of the races, the crazy jumps and the beautiful setting everything about the game makes you forget to breathe.

Be it teetering on two wheels trying to avoid a ravine or controlling your path through an aerial slalom hundreds of feet above forest treetops, your adrenaline will be pumping.

Ubisoft has managed to take the extreme sports of Steep and make something even more, almost impossibly, extreme. 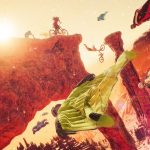