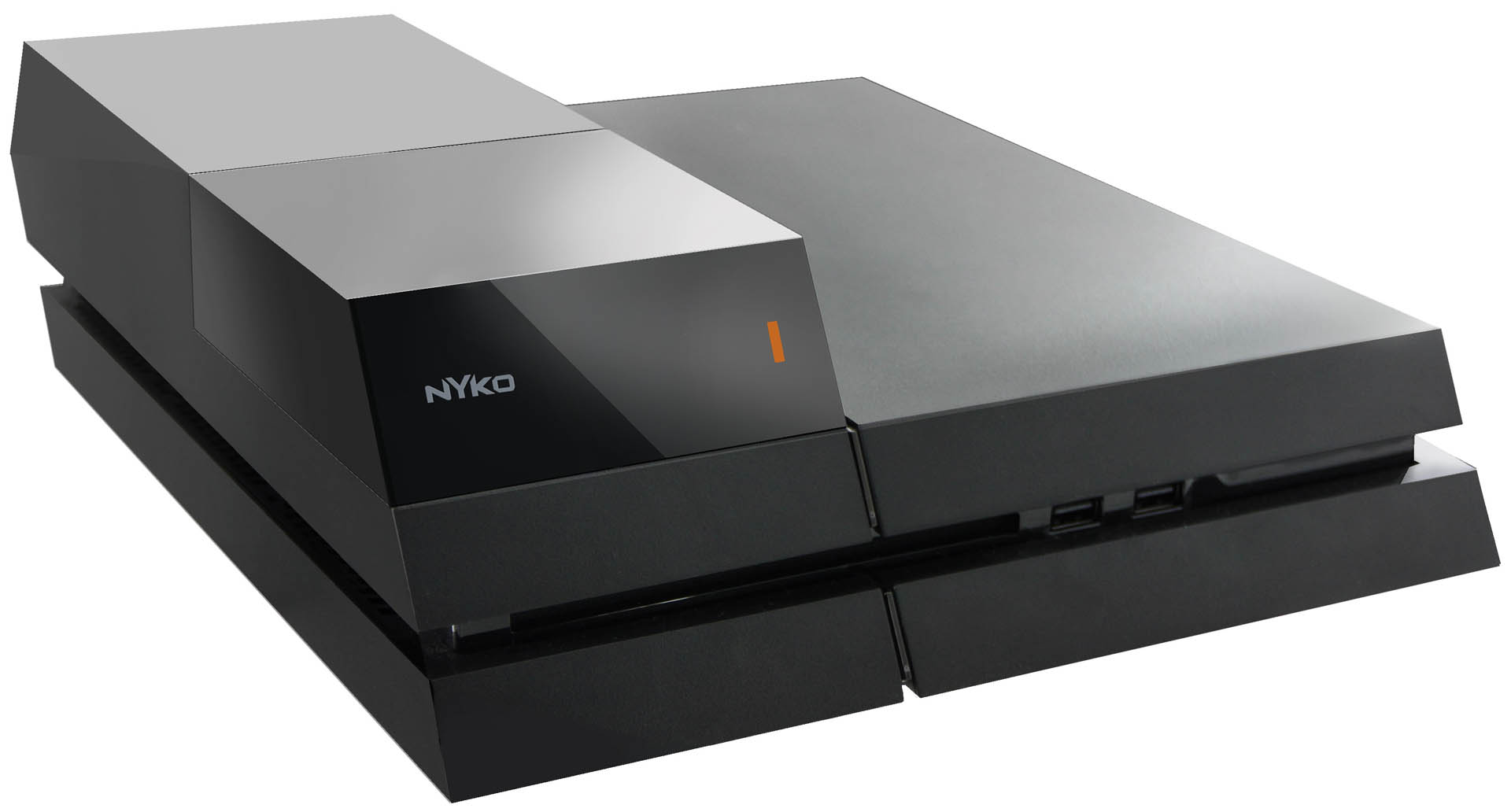 In an attempt to find a solution to his ongoing PlayStation 4 storage problems, Shane the Gamer’s Australian editor checks out one of Nyko’s PS4 Data Bank 3.5” hard drive enclosures.

There’s no such thing as having too much data storage, ask any PC gamer. Unfortunately nobody told this to Sony or Microsoft, two companies that should have known better when they saw fit to stuff a paltry 500GB hard drive in their new consoles.

This extremely short-sighted action will have ramifications for gamers for the life of this generation of game consoles.

The swap over to the higher-capacity Blu-ray discs is part of the problem. Blu-ray access times are too slow to load content on-the-fly, so for both the Xbox One and PlayStation 4 game installs are mandatory. With some games requiring 60GB of space, you’d be lucky to get a dozen games on your 500GB hard drive before you fill it up. A full drive means deleting older games to accommodate new ones and serious restriction on the amount of screenshots and gameplay video you can keep. 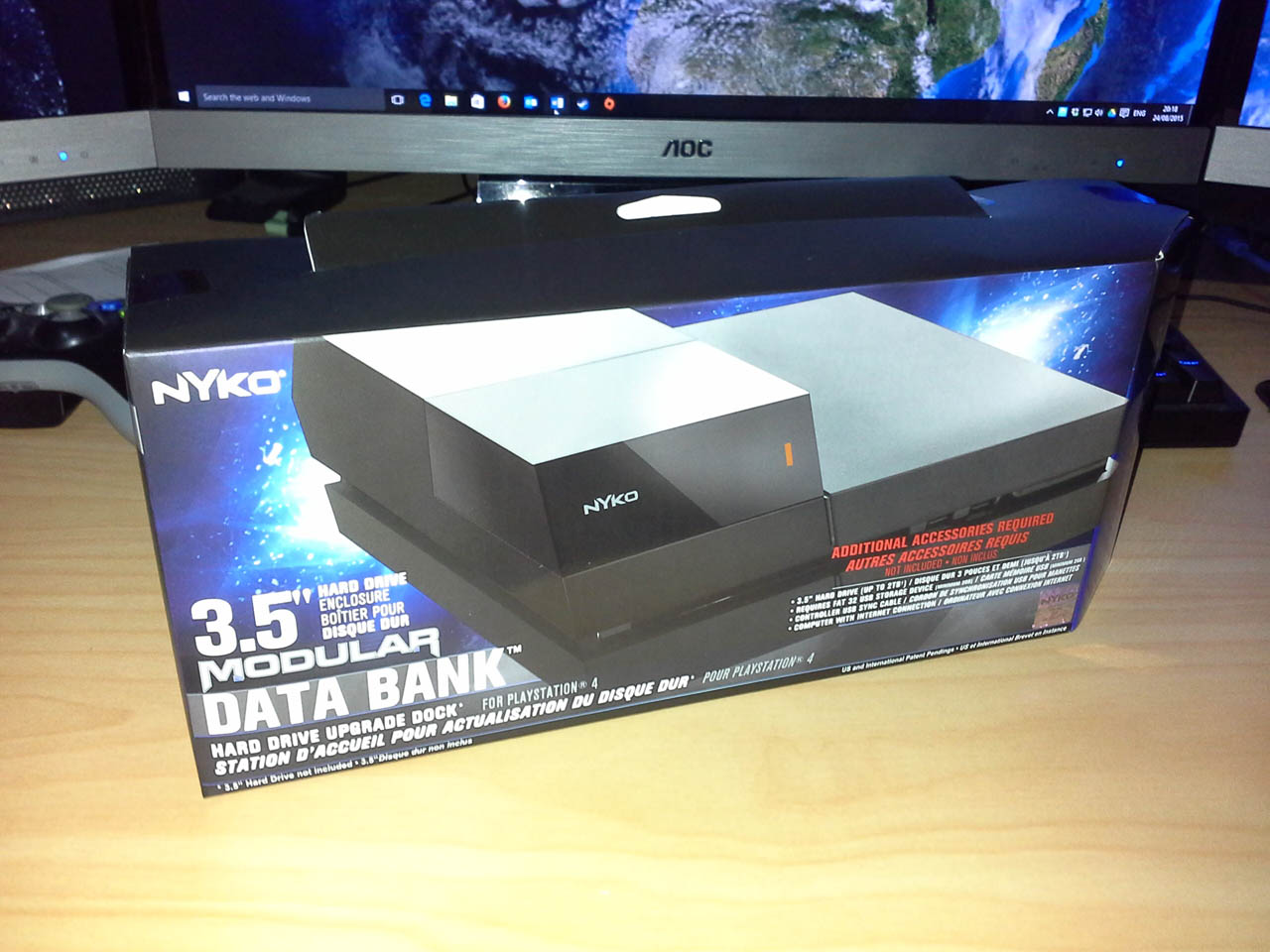 Whilst the Xbox One will support external hard drives, right now, the options to remedy the PlayStation 4’s storage shortcomings are extremely limited. Yes, Sony may have had the foresight to allow users to open up their console and replace the measly 500GB drive with something bigger like, say, a 1TB drive. But that’s all you can do.

Whereas the Xbox One supports any relatively inexpensive 3.5” external USB that you plug into it, the PlayStation is limited to costly 2.5” drives.

Enter Nyko with a potential solution with their PlayStation 4 Data Bank. Basically, it’s a housing that replaces the original PS4 drive cover, big enough to accommodate a 3.5” hard drive.

The Data bank is really easy to install, but comes with three massive instruction sheets covering the three processes needed to get everything going.  First, as with any PS4 hard drive replacement, you need to download the latest version of the system software, that’s the full version, not the update. The system software must be placed on a FAT32 formatted thumb drive (NTFS will not do, but I think exFAT will work). 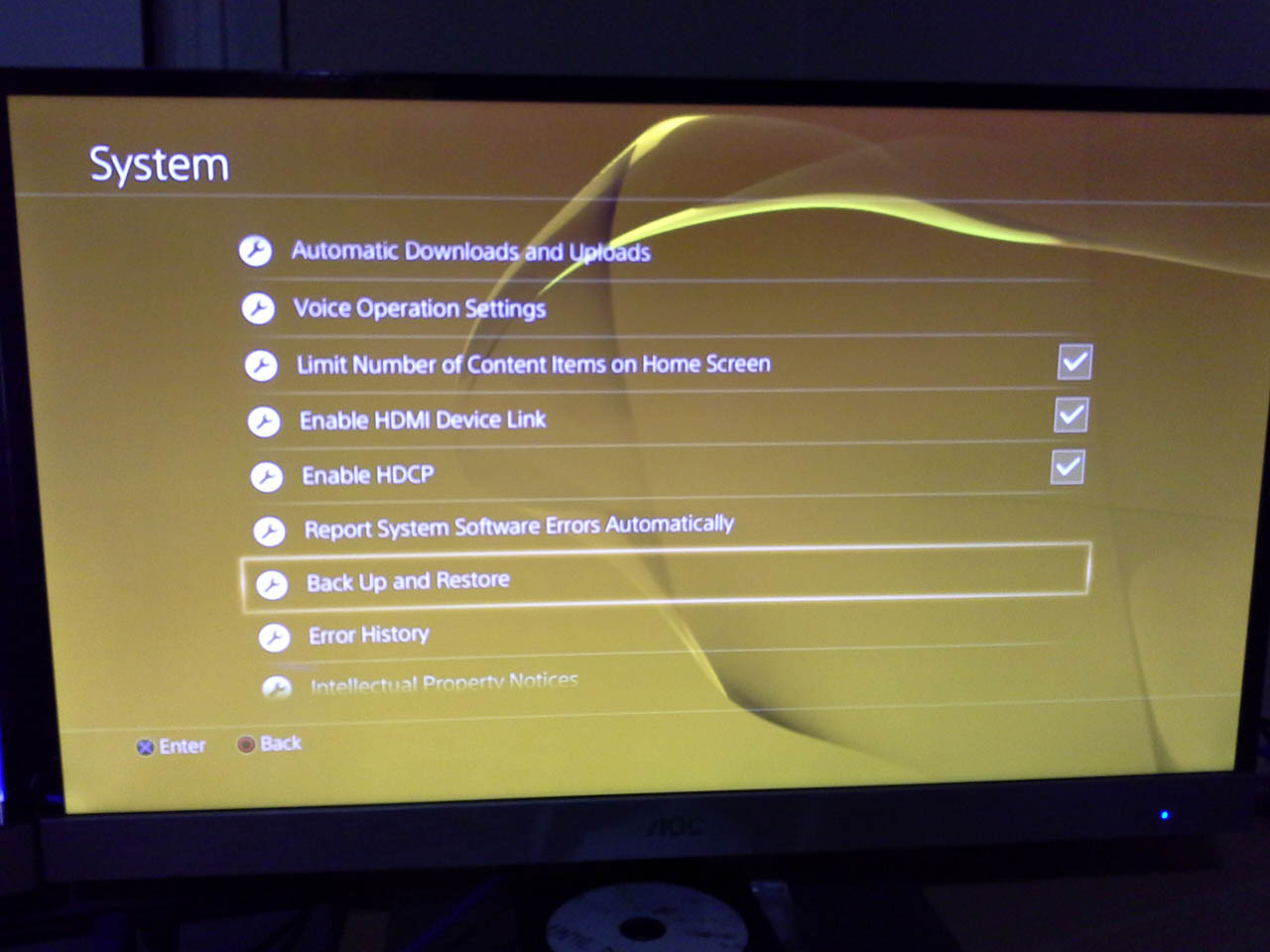 You also need to consider how you are going to back up your data. If you are a PlayStation Plus subscriber your save should already be uploaded to Sony’s server (unless you’ve filled up your ridiculous 1GB online storage allocation). The easiest way to back up your stuff is to use the PS4’s built-in backup and restore facility to image the entire hard drive. It takes a while and does require the temporary use of an external hard drive. It also take a long time. Expect at least a three hour wait to backup 500GB and the same to restore.

The Data Bank installation only takes a couple of minutes. First the PS4’s drive cover needs to be slipped off, that’s the shiny side on the left. Then it’s just a case of unscrewing the drive caddy and pulling it out.

With the original hard drive removed from the PlayStation 4, the Data Bank’s adapter can be fitted into the vacant spot and screwed down. Then the Data Bank enclosure is slipped on, using the same fixings as the PS4’s old drive cover. The enclosure has a connector which clips into the adapter. 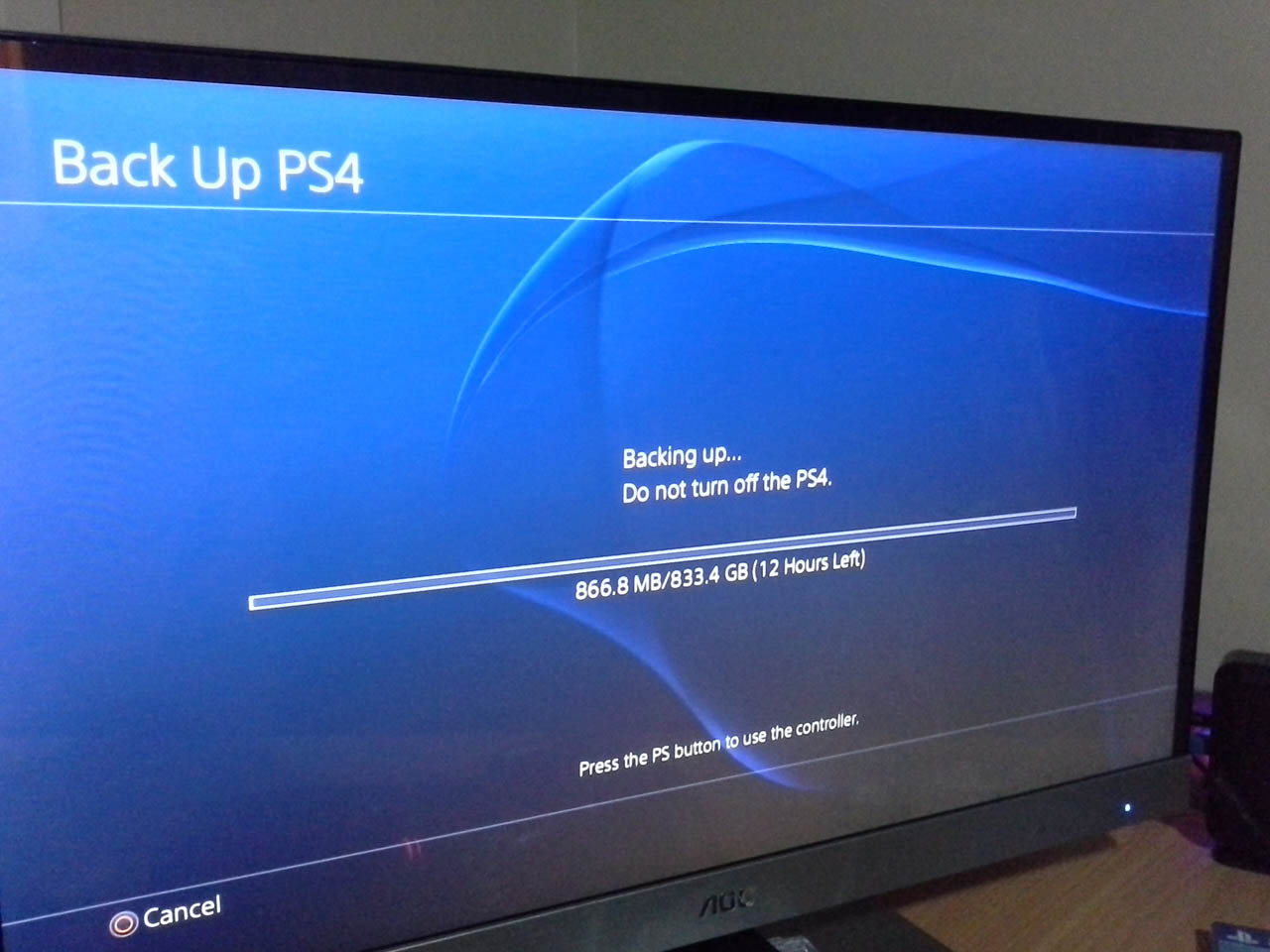 Fitting the new 3.5” drive is really easy; you just carefully push it into the enclosure where it firmly clips into the power and SATA connectors. Then it’s just a case of putting the shiny Nyko cover on the Data Bank enclosure.

Whilst the drive fits snuggly into the enclosure, it is not fixed firmly enough for my liking. I’d have preferred to have screwed in down or something to stop it coming loose. I donn’t tend to move my PS4 about, but if you did and weren’t careful, I could see the drive slipping out, knocking the cover off and smashing to bits on the floor.

The PS4 needs to then be booted into safe mode. You do this by pressing and holding the power button for about six seconds, until it beeps. Following the prompt you insert your USB drive with the system software and wait whilst the PS4 reconfigures itself. 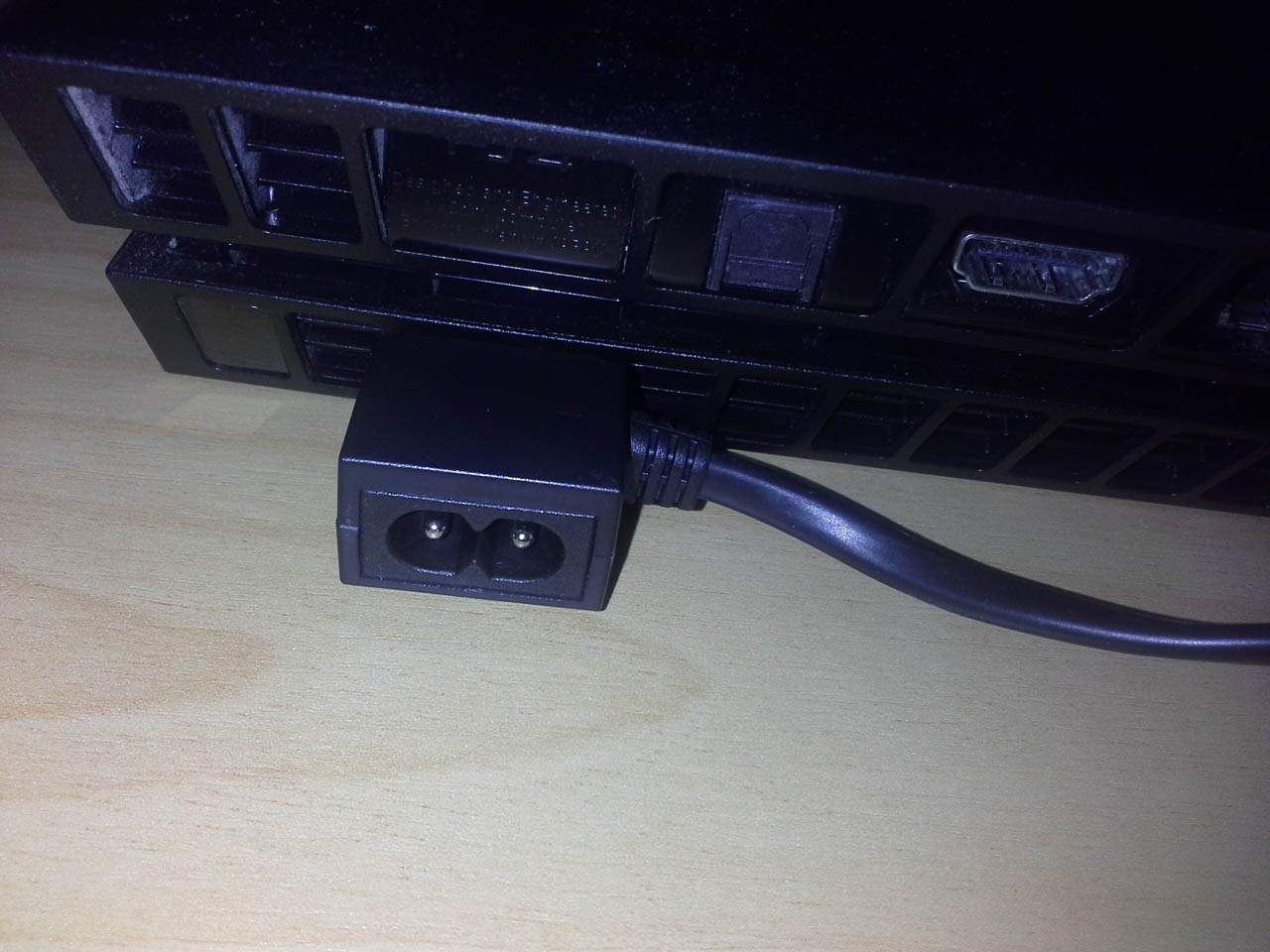 When the process is finished, the console is a back to its initial state. Depending on how you backed up your stuff you will need to either sign in and start downloading your saves or head straight over to the backup/restore options and prepare for the long wait as your data transfers over from your external drive.

I was aware that in the past, sticking anything larger than a 1TB drive in your PS4 was asking for trouble, but I thought that we had moved past that.

It was only when the Data Bank arrived that I noticed a warning on the box stating that it would only work with drives up to 2TB. I’d intended on sticking a 3TB Seagate Barracuda in it to maximise my investment. The 2TB limitation was a big deal and something that wasn’t advertised on the Mighty Ape website. 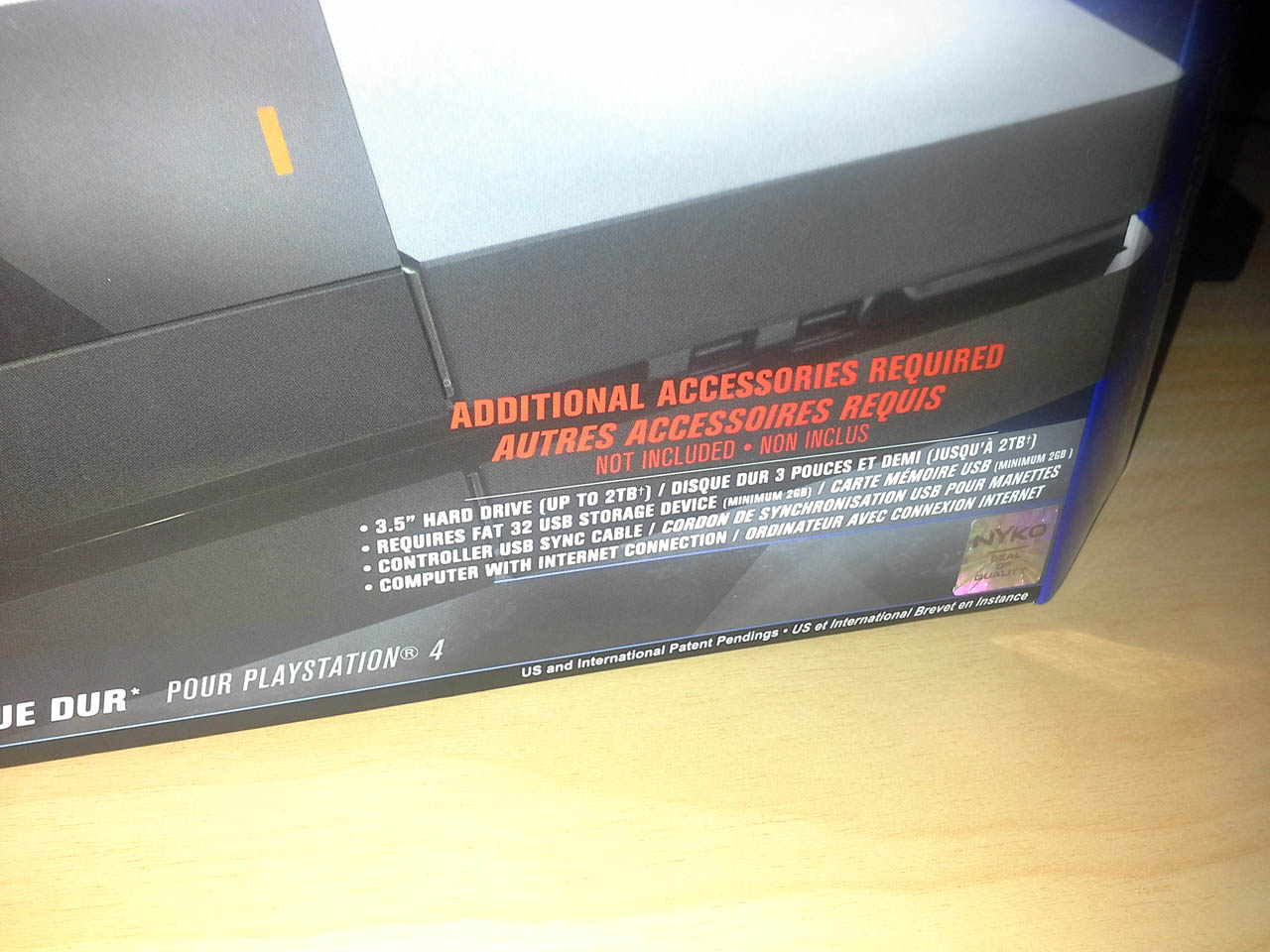 Investigating the issue on the internet, it seems that the PS4 can’t properly suspend and resume with a drive over 2TB. Whilst there are some workarounds, my PS4 was going to have issues with my 3TB drive.

Adding insult to injury, for the price of a 2TB 3.5” drive and the Nyko Data Bank you can buy a 2TB 2.5” drive and slot it straight in the PS4… but more on that later.

I was disappointed, but still keen to see the back of my PS4 storage issues, when I slotted a 2TB Seagate Barracuda into the Data Bank. Eight hours later my PS4 was back up and running with twice the storage capacity.

Whilst the Nyko Data Bank solves my immediate problem, the inability to utilise a 3TB drive is only one of the issue that I have with it.

3.5” drives give off a lot more heat, making the PS4 very hot, hot enough for me to get concerned about leaving the PS4 on to download overnight. The other thing about 3.5” drives, is that a decent one will spin at 7,200rpm, a lot more that the 5,200rpm that is standard for 2.5”drives. The buzz of a drive spinning at 7,200rpm is all fine and dandy in a PC, but when insulated by only an eggshell thick bit of plastic, the hum can get very annoying. 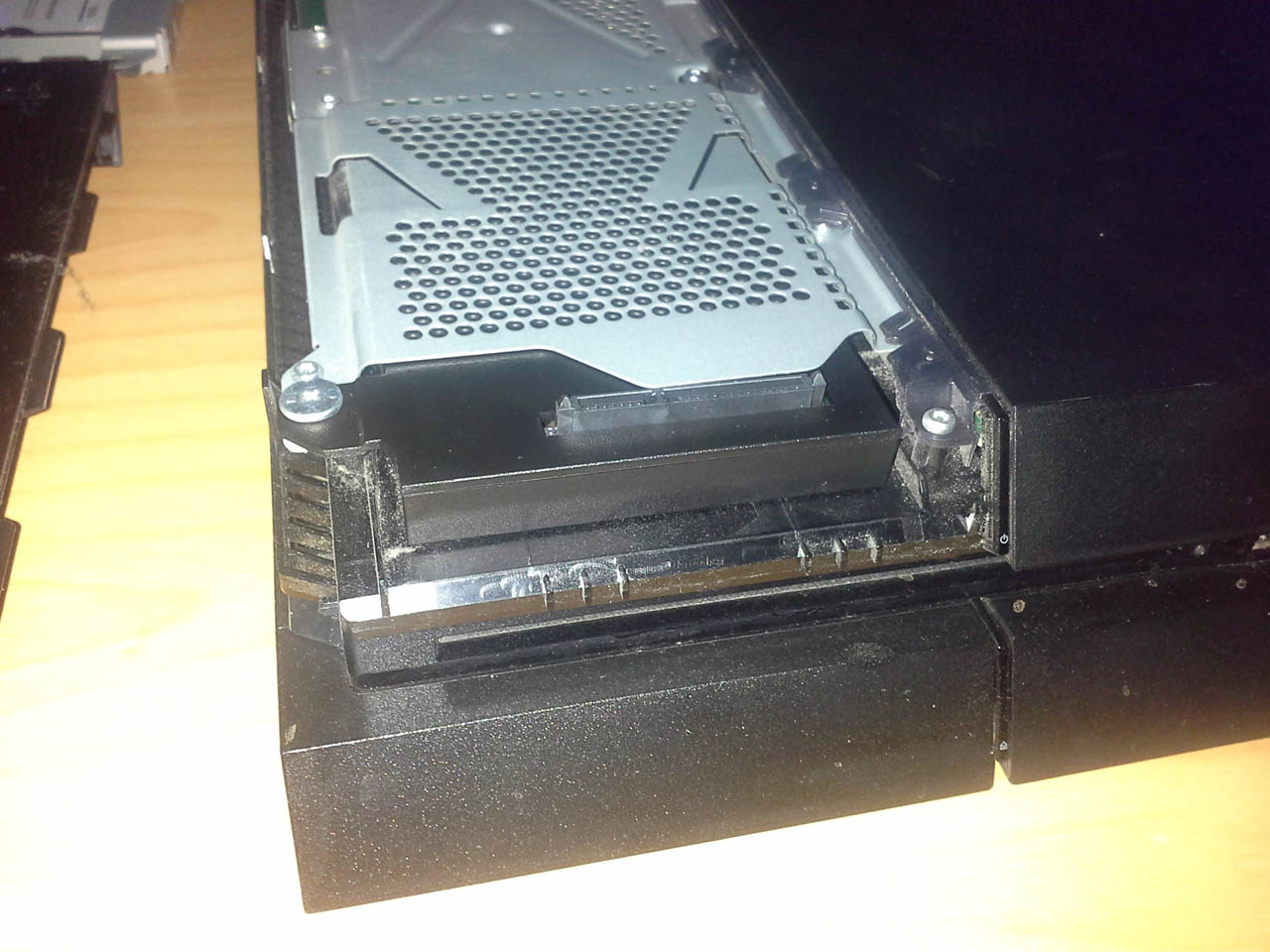 During this product test, by way of comparison, I also tested a 2TB Samsung 2.5” as a direct replacement for my 1TB PS4 drive. Interestingly, the 2TB 2.5” upgrade was fraught with problems of its own. Whilst it all seemed to go well at first, I soon found that my PS4 unable to read games from discs. Worst still, the machine would not boot properly from a shut-down, eventually causing a failure so catastrophic that I had to reformat the drive and start again. It seem that, in order to get a 2.5” 2TB drive to work properly the PS4’s HDCP needs to be switched off. This is because the drive is unable to perform the required copy protection handshake with the console in a timely manner.

Whilst I have issues with the Data Bank, I’d sooner enjoy the full functionality of my PS4 than have to switch things off – applications like Spotify won’t work without HDCP switched on – in order to get the hard drive to work.

The Nyko Data Bank is a compromised solution and possibly the best one that we have until Sony sees sense to provide us with an external storage solution. After a couple of years of service even the 1TB Sony are currently putting in their machines isn’t going enough space to store a decent game collection. I can only imagine what a nightmare it will be in ten years’ time if Sony don’t pull their finger out. 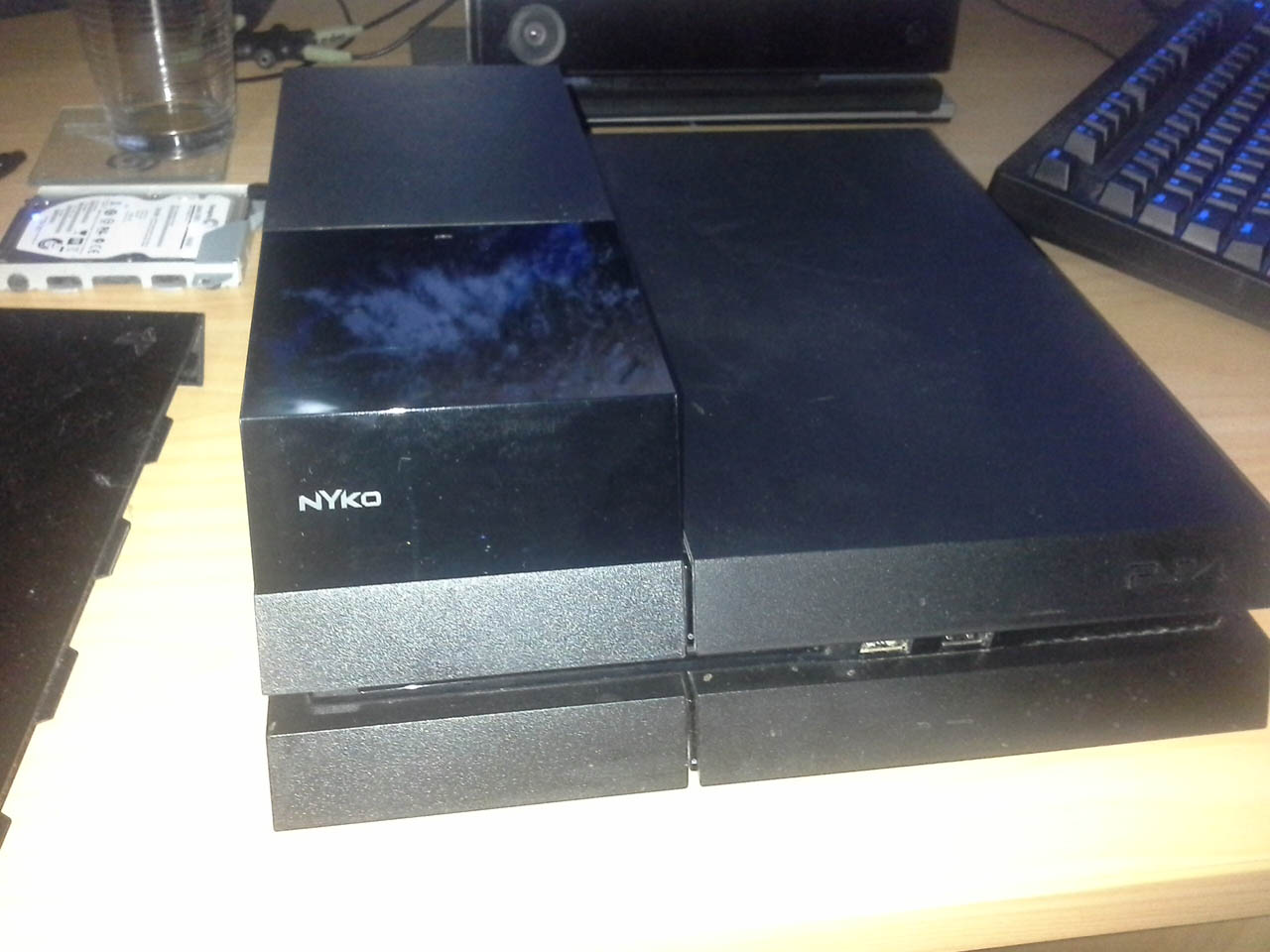 I hope, intime, Sony at least allow PS4 owners to put larger capacity hard drives in their machine and when that day happens I’m sure my Nyko Data Bank will be ready to receive an upgrade.

The Data Bank solved my own PS4 storage problem, but I’m still reluctant to whole-heartedly recommend it. It has too many issues for my liking.

My advice would be to stick with a 1TB 2.5” hybrid drive for as long as you can. But if you must increase your hard drive capacity beyond 1TB, the Nyko Data Bank is probably the best way to go right now.