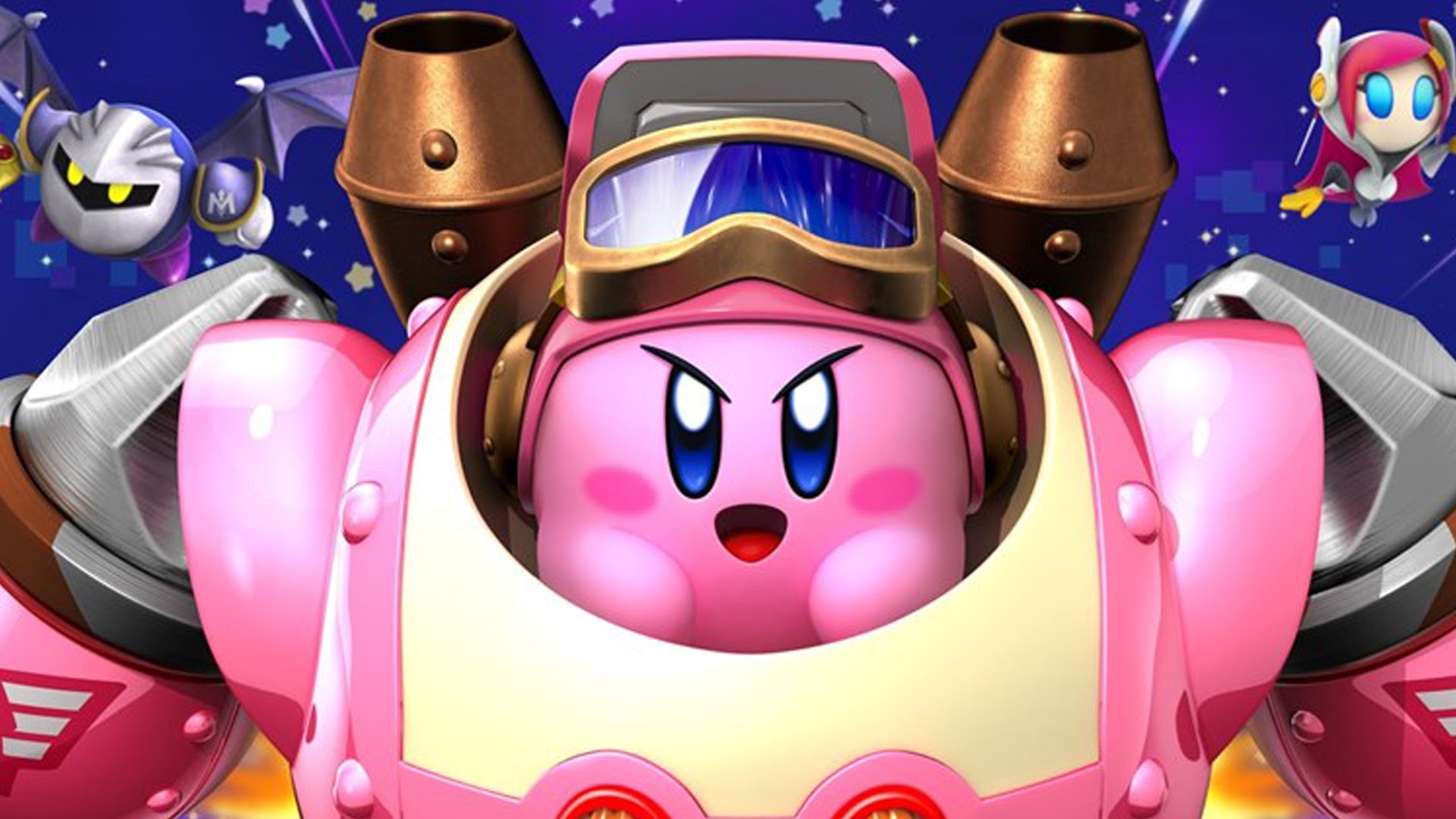 Kirby: Planet Robobot is oozing with signature Nintendo traits. Sticking to its classic 2D platforming roots, the game manages to throw together enough new ideas with the signature Nintendo level of polish to make it a solid entry into the Nintendo 3DS line-up. It is missing however that special something that would elevate it to becoming a truly memorable Nintendo game.

As the name gives away, there is a robot flavour to this latest Kirby outing. The story takes your typical world in peril plot line. A spaceship has invaded Kirby’s homeworld causing the world to become mechanised and it is left to Kirby to try and save it. As with many other family-friendly Nintendo games, Kirby: Planet Robobot isn’t very plot heavy, nor does it feel like it should be. The game is first and foremost about the fun and addicting gameplay, colourful visuals and light hearted tone. 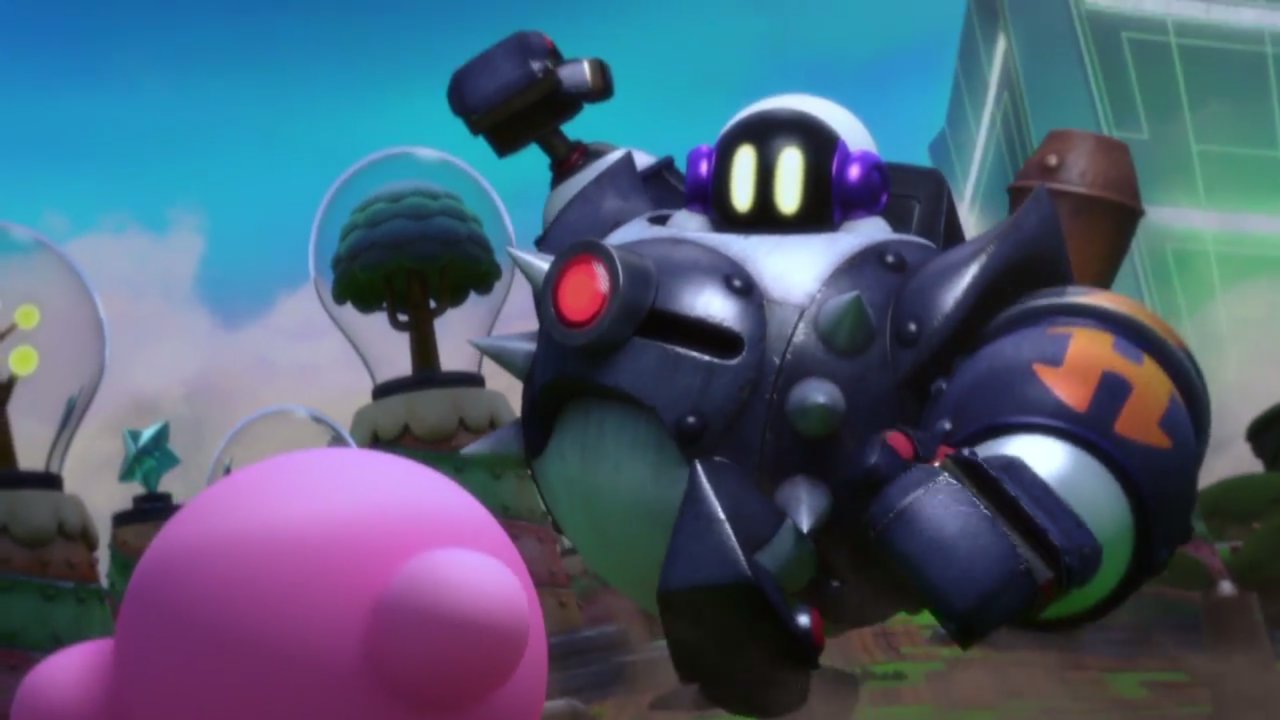 In order to stop the evil plaguing the land, you must rely on Kirby’s signature ability to inhale enemies and absorb their power. Playing around with different characters’ abilities in the game is a lot of fun and helps the gameplay from becoming stale. While it is easy to develop favourites, the different abilities are well balanced and have their own time and place.

The key new addition in this game comes via way of a mech suit, Robobot Armor, which can be piloted frequently throughout the game. Like in Kirby’s normal form, the Robobot Armor can absorb the power of enemies, allowing it to possess numerous different forms. When piloting the Robobot Armor, Kirby sacrifices the ability to fly in order to gain immense strength, a fun exchange every once in a while.

My biggest issue with the game is the inherent lack of challenge both in the combat and the platforming elements. Dying is something generally reserved to a conscious decision on your part to restart the checkpoint because you missed something. 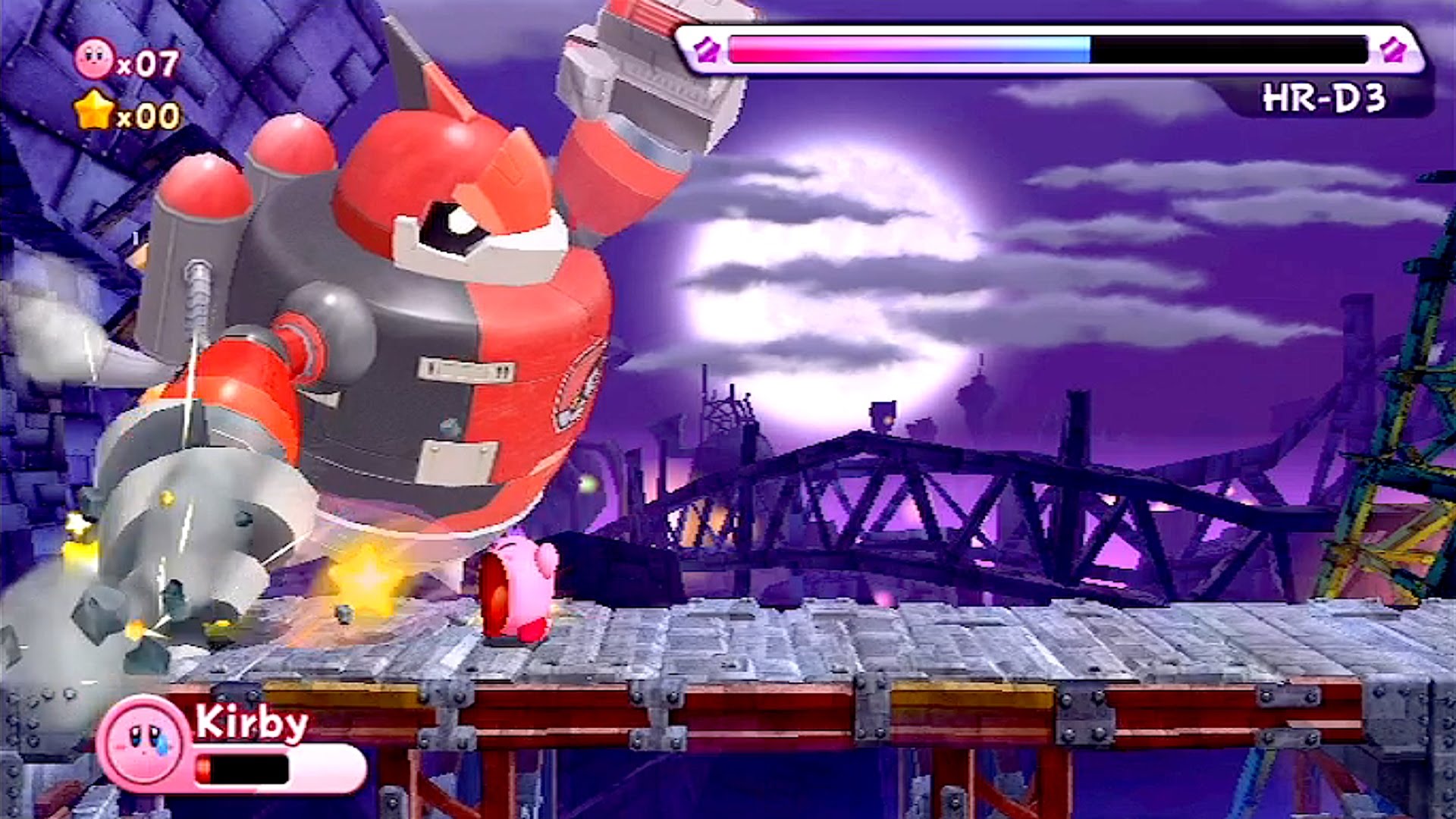 Kirby’s ability to fly generally negates a typical platformer focus on jumping. The game instead looks to other creative ways to throw platforming challenges at you, causing you to navigate around a wide variety of traps and hazards. The creative avenues explored in order to achieve this is impressive and makes the game fun however it just doesn’t offer too much challenge.

More than most family friendly platforming games, there is a big focus of combat. Kirby comes equipped with a sizeable health bar and a wide range of offensive capabilities thanks to the ability to absorb enemy powers. Your typical enemies are however very weak and do very limited amount of damage. Instead of feeling vulnerable to enemies, you feel severely overpowered. 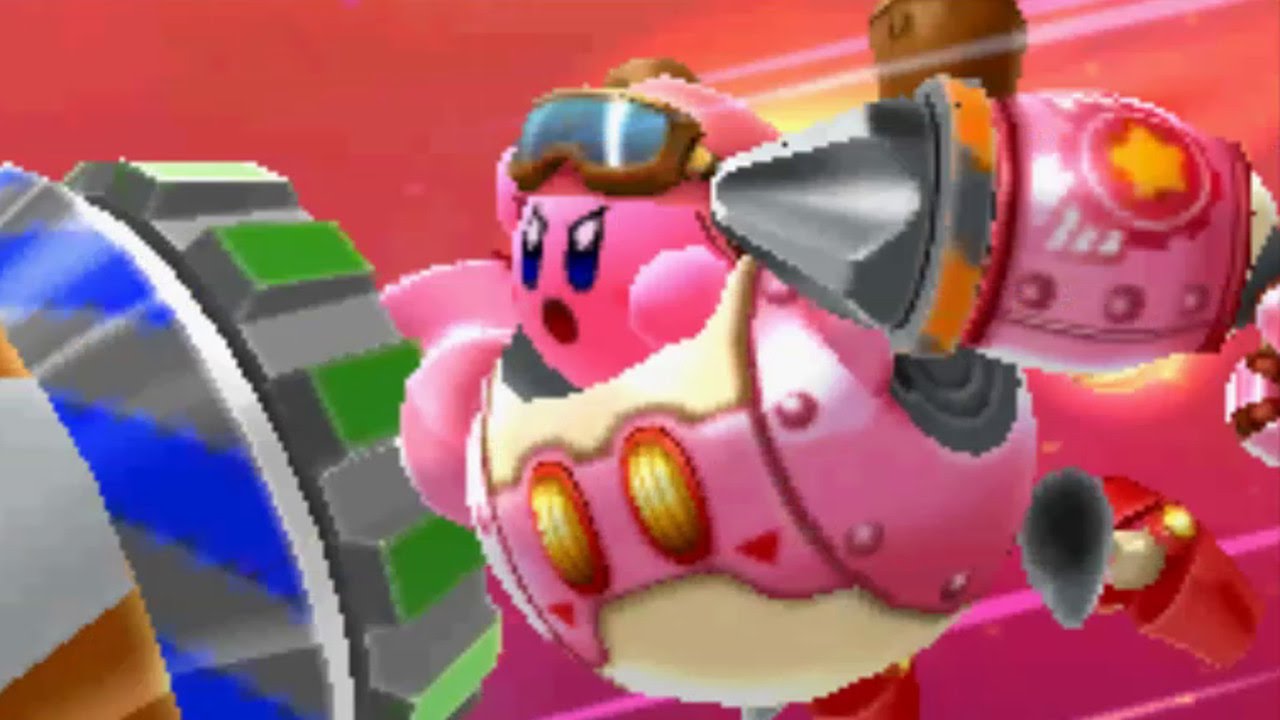 Most of the challenge comes from the boss fights which turn out to be some of the most fun moments in the game. Unlike every other enemy, you can’t simply inhale and insta-kill bosses. Instead you must rely on either shooting deadly starts or utilising Kirby’s copied ability to slowly wear down their health and eventually defeat them.  While the same mini-bosses can get thrown at you several times, the main bosses are all unique, having their own unique set of attacks and weaknesses.

A major focus of the game is through finding power cubes, the main collectible in the game. Each Level typically has 3 power cubes which require solving puzzles or a bit of searching to unlock. You need a certain amount of power cubes to unlock the final boss in the area. You also unlock a bonus Level if you manage to collect all the power cubes in an area. 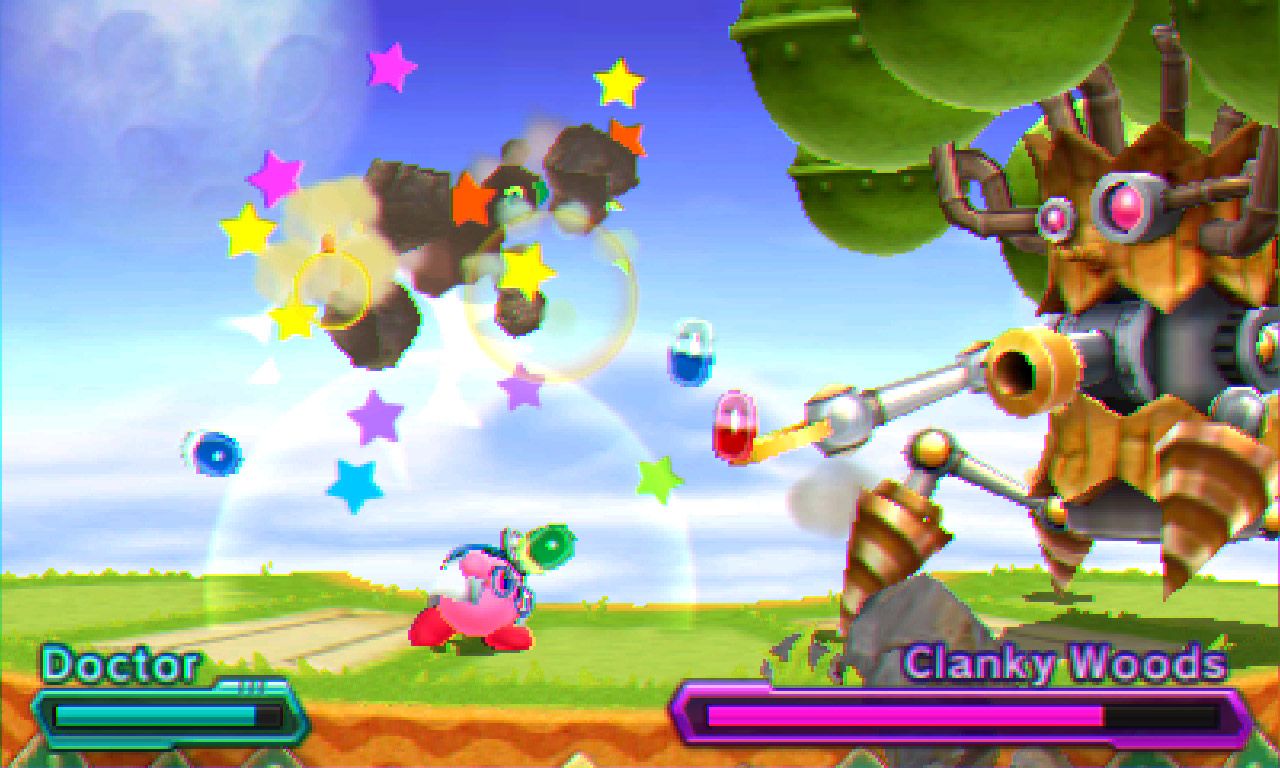 Trying to find all the cubes is addicting and enjoyable however it also is way too easy. You generally don’t have to stray too from the main path to unlock all the cubes. It is also reasonably obvious how to solve the puzzles. Being able to pull off the solution however is another story. With several of the puzzles, you only get one chance to do it. If you fail, you must find a way to restart to the last checkpoint which most often is by dying. By far the majority of the deaths I experienced was from trying to restart the checkpoint.

Once you complete the decent sized story, there are a variety of other modes you can play ranging from playing through the game again with Meta Knight to a boss fight mode. These modes provide a nice finish to the game, allowing you to jump back in and have some fun.

Kirby: Planet Robobot is an entertaining action platformer that is sure to provide some fun for fans of the genre. The lack of challenge lets down the otherwise creative and fun gameplay. Still, there is enough polish and Nintendo charm to make the game a Nintendo 3DS game worth a look.