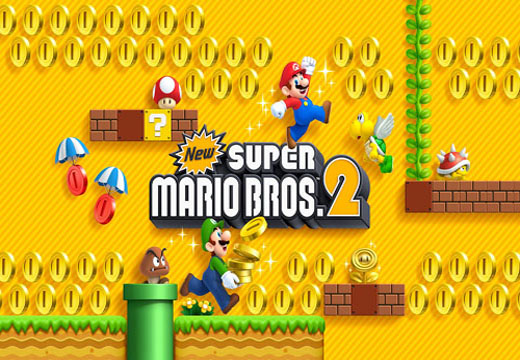 Princess Peach has once again been kidnapped by Bowser, but this time around Mario has more important things to focus on; Coin Collecting.

The Mushroom Kingdom is bursting with 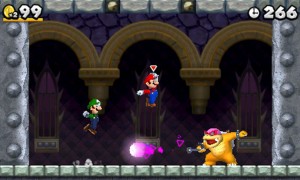 Gold Coins, more than usual, as the side scrolling multi tiered Levels line up overwhelming trails of them. Like ants over a sticky sweet substance, Coins are EVERYWHERE!

From Pipes that transfer Mario to Coin filled wonderlands, bricks that produce Gold when jumped at, Gold Enemies that leave a trail of the gleaming currency through to Gold Discs (basically large Coins) and Gold Rings that transform enemies into Gold and Golden Flowers that enable you as Mario to turn everything into Gold.

You may have guessed by now, that you need to collect up as much of this booty as possible throughout each Level and you also need to finish the Level before the time runs out.

Golden Star Coins can be spent in-game to unlock new areas within the games Map. (The Map can also be expanded upon by way of real-world purchasing of DLC Content). 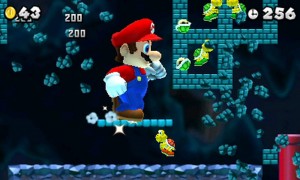 All Coins collected are recorded and remembered, so if you repeat a Level that gets your Coin tally up. There is also a multiplayer mode; ‘Coin Rush’ whereby you can challenge friends’ Coin acquiring records via Streetpass.

Also via Wireless upto two players can work through the entire gameplay together, sharing the Coin stats, either as Mario or Luigi (both players need to have separate 3DS consoles each with their own version of the game).

Eventually you will gain differing powers to the likes of Invincibility, Racoon Mario which enables him to fly –  this is extremely handy as you will then be able to go back  and access areas you could not before, Mega Mushroom Power Ups and Super Leaf as a combat ability.

Putting aside the old school feel of each and every Level, do not expect it to all be plain sailing.

Bowser has placed a zillion 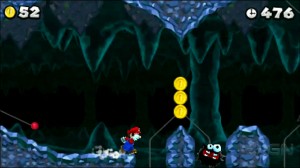 Koopalings in your path(s) not to mention the tricky-ness of the Levels themselves. Trying to complete them within the specified timeframe AND collecting a decent amount of Coins is an achievement in itself.

At times, further into the game you’ll find yourself skipping opportunities for Gold, just to get to the end.

New Super Mario Brothers 2 for 3DS is one that you will find yourself getting a little too focused on to get that all important Coin tally up above other players from around the Globe (your Stats can be uploaded via Spotpass and you can checkout other players Coin stats aswell).

An excellent quick play title, as the timeframe for most Levels is fairly short, and the replay ability of it depends solely on you, your competitiveness and patience. 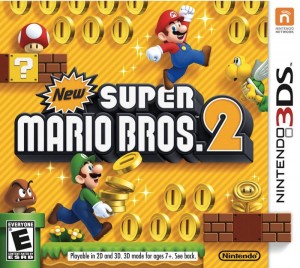