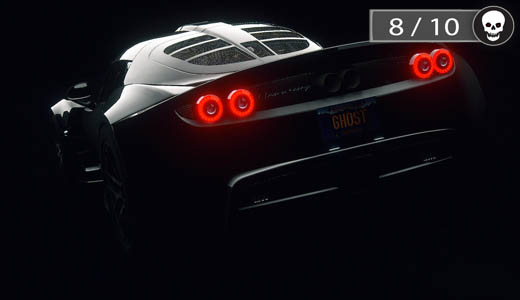 EA Games’ latest entry in their long running racing series, Need for Speed Rivals, is another title enjoying a release on both the last-gen and what is now the current-gen consoles.

I’d been playing the Xbox 360 version of the game extensively before getting hold of the Xbox One version for this review.

On the Xbox 360, Rivals is mighty fine game and one that seems to have benefited from the extra effort required to make the game shine on the new consoles. I was keen to see what an already a nice-looking game looked like all polished up on the Xbox One.

For this year’s Need for Speed outing players are transported to the relatively rural roads of Redview County. It’s a bigger area and a lot more open than the urban streets of Fairhaven City’s from Need for Speed: Most Wanted. With mountain passes, hairpin bends and sweeping curves players are going to have to learn to drift very quickly if they are to succeed. 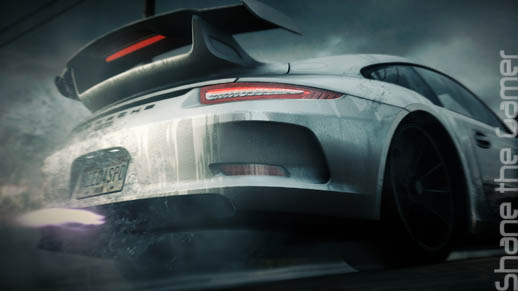 The game’s titular rivals are the thrill-seeking racers and the cops charged with bringing them to justice. Players have the opportunity to switch between the two at will. With each faction having a campaign of its own, the game provides enough variety to keep you going. Getting board of stopping racers as a cop? Switch to a racer and out run a few cops, instead.

Need for Speed Rivals sees the developmental touch passed from EA’s British studio, Criterion, over to their Swedish outfit, Ghost Studios. Whilst the game does stick quite closely to the Need for Speed formula with familiar hot pursuits, rapid responses and gadgets; there are a few changes this time round that are worth noting. 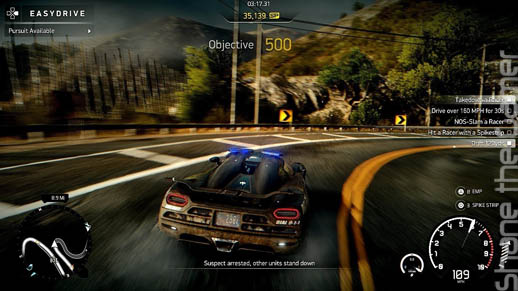 Compared to Criterion’s recent Need for Speed games the car handling for this one does feel different. When I spoke to the game’s lead designer, James Mouat, last year (which you can read here) he explained that the developers were trying to get a balance between simulation and arcade car handling. This was in part due to the input of extreme rally driver, Ken Block, who guided the team with his expectations of how the cars should behave.

Whilst I’d say that the game still has two feet firmly in arcade racer territory, Rivals being a far cry from the likes of Forza and Gran Turismo, it does take a bit of practice to get the cars to behave as you want them to. And that’s not really a problem, as the game affords players that persevere with a level of control that allows them to drift around corners, cars and obstacles with an unprecedented level of precision. This make races, chases and general breakneck driving exhilarating and heart-in-mouth stuff. 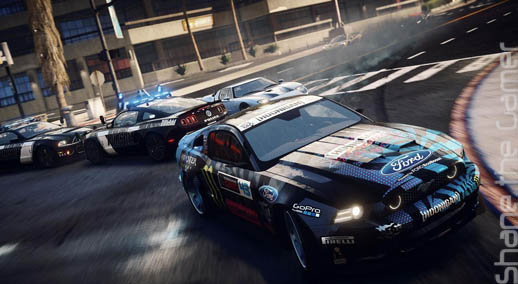 This year we get also get All Drive; effectively turning the entire open road into a game lobby. As soon as you load the game and the tyres touch the tarmac you are sharing the road with other players. If you choose to be a cop, it’s quite in order to hunt down and bust players that are racers. Inversely, as a racer, expect to be continuously on the lookout for players that have chosen to be law enforcement.

All Drive actively promotes co-operative gameplay by utilising a point sharing system. For instance, two cops both chasing a racer will both receive a reward if the racer is taken down.  Similarly, a player-cop and player-racer engaged in a high speed chase will both receive a multiplier on their Speed Points earning for playing together. All Drive is a bit different, with the game thrusting players into the multiplayer environment from the start, but I can see this happening more and more. 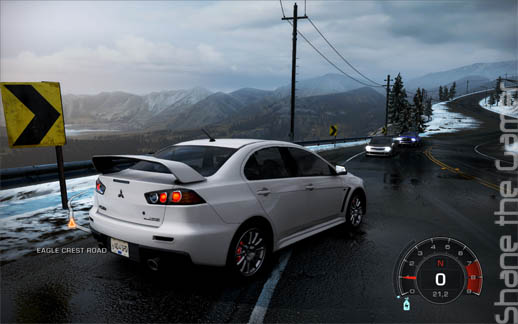 Progression in the game is via a mission assignment structure which is based on a number of challenges.

The challenges range from simply earning Speed Points (which you can do by simply hooning around) through to winning races or taking down racers in a hot pursuit.

After successfully completing the challenges players must return to one of their faction’s bases (command post for cops and hideout for racers) in order to finish the assignment. It is also at this point that any Speed Points earned are added to the player’s accounts.

Rivals has a rather brutal risk/reward system that will appeal to the gamblers out there. 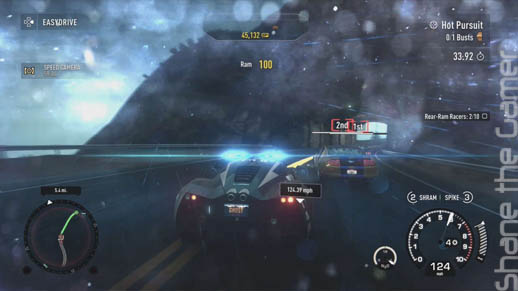 As a racer, if you get busted, you’ll lose of all the credits earned since last visiting your hideout. This adds an extra element of suspense when you are carrying around a load of Speed Points and there’s a persistent cop on your tail.

On returning to your faction’s base after successfully completing a mission, players unlock a new car and the next set of challenges. The game allows players to choose from three different assignments for each mission. It’s a one-time choice, which means that every playthrough is going to be different.

Cops can choose from Patrol, Undercover and Enforcer. While racers can chose Race, Pursuit or Drive. By choosing assignments that feature your favourite tasks, you can customise your game experience to your own preferences. 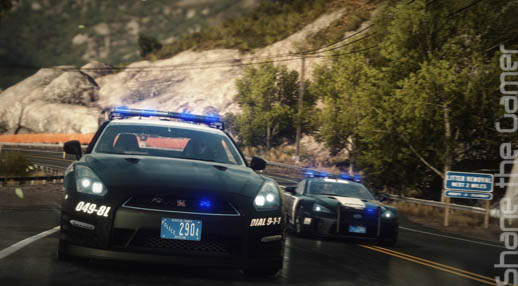 There’s also a fair amount of customisation to be had by way of tinkering with the cars.

Racers can invest Speed Points in performance upgrades for their cars, increasing attributes like durability, acceleration and speed. But it’s not just raw speed that’ll get you over the finish line or allow you to take down those racers. Fans of the series will welcome the return of pursuit tech gadgets. From electromagnetic pulses to attack helicopters, each car comes equipped with two slots in which to install your selection of gadgets. Whilst each piece of tech can only be used a few times, driving through a repair shop will refill it (and repair your car).

Review County is littered with activities, each of which can be activated with the tap of a button. 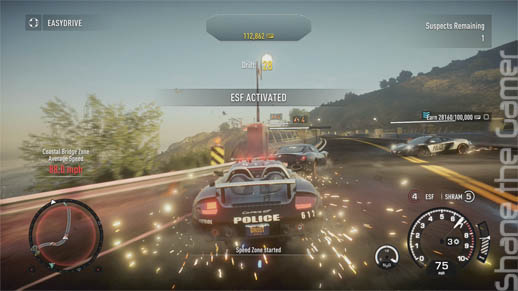 Outside of the set races and pursuits there are also an unlimited number of player-initiated activities. As a cop if you see a racer, another player or AI simply switching on your flashing lights will instigate a pursuit. As a racer you can challenge another racer, again player or AI, to a head-to-head race. It’s easy to get distracted from your assignment and instead just engage in the random activities on offer.

If last-gen was all about over-saturated colours (as lampooned by Naughty Dog in Uncharted: Drake’s Fortune), then this gen is all about particles- i.e. bits, and Need for Speed Rivals absolutely embraces them. I’ve never seen so much dust, leaves and other bits of crap being blown about in a game. 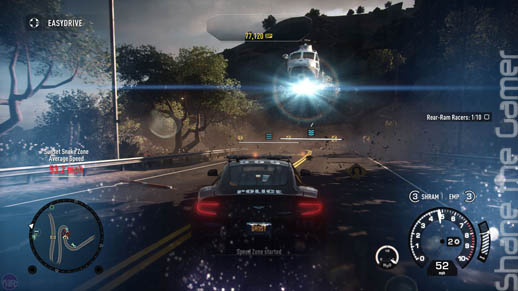 The game is built on the Frostbite 3 engine, the same as Battlefield 4, so this means that you’ll have plenty of stuff around you to smash up. All those fences, lamp posts and bus shelters in your way can be ploughed straight through if it means keeping your place in the pack. There’s also plenty of variety in the driving environment with a day/night cycle and a dynamic weather system that will throw rain and snow storms at you.

Rivals is a game that looks great on an Xbox 360, but really shines on the Xbox One.

The admittedly barely-noticeable pop-up on the Xbox 360 version is nowhere to be seen on the Xbox One. Also the cars, which would kind of disappear on the 360 when they got too far away, are visible right up to the horizon on the Xbox One.

The game’s fantastic lighting really comes into its own with the extra clarity afforded by the new and more powerful technology; although, from a gameplay point-of-view the two versions are pretty much identical. 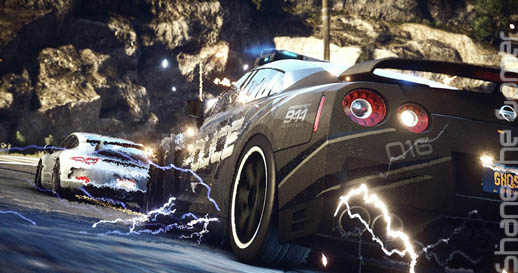 Whilst the game is heading in the right direction it’s not without its issues. These are mainly down to the way the game implements multiplayer.

As cool an idea as All Drive is, the game seems to lack a cohesive multiplayer element. I realise that this is a bizarre statement considering the game is always multiplayer. But with the mission structure, the races and pursuits, it’s like you are playing a single player campaign in a multiplayer game.

All my multiplayer interactions were optional affairs amongst random strangers and not proper races or anything like that. I’m not saying that the multiplayer isn’t fun, it’s just All Drive doesn’t work as well as I thought it would. 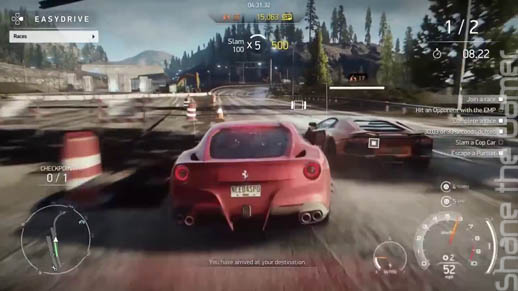 The online nature of the game means that at start-up Rivals goes out there to find a game with a vacancy and a decent connection. My Xbox One version took a surprisingly long time to actually get into a game.

I’m not sure if this is down to the smaller player-base on the Xbox One compared to the Xbox 360, but after that long wait I often found myself stuck in a game with no real players, only AI bots. By comparison the Xbox 360 threw me into game almost instantaneously and usually with a full complement of actual players. 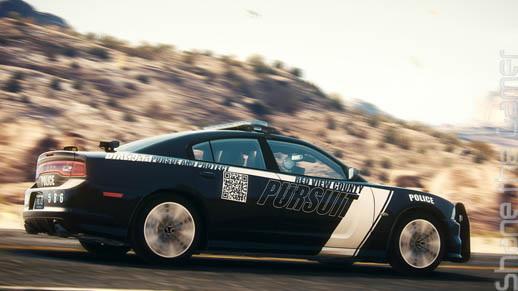 Predictably the only real difference between the Xbox 360 version and the Xbox One version are the visuals.

The Xbox One provides players with a graphical feast that provides a frantic complement to the insanely fast on-screen action. The All Drive system, whilst still needing a bit of work, is inspired and something that I expect to see more of as social gaming starts to become the norm. The game itself is a bit derivative of what has gone before, but with enough tweaks, especially in the car handing, to make it feel fresh.

For Xbox One fans it’s the perfect antidote to the enjoyable, but comparatively dry gameplay of Forza 5. If you like your racing blisteringly fast, fun and frantic you ought to have Need for Speed Rivals in your videos game collection.