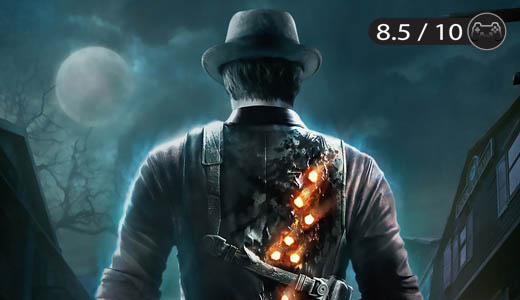 If you are going to set your supernatural detective game anywhere, you can’t really go wrong with setting it in the infamous US town of Salem. And that’s exactly where Airtight Games have chosen to set Murdered: Soul Suspect.

It’s game that may just be the modern-day spiritual successor of the point and click adventures of old.

Detective Rohan O’Conner used to be a bad boy living on the wrong side of the law and he is covered with the tattoos to prove it. But that all changed when he found the love of his life and got a job with the Salem Police Department with the help of his brother-in-law.

Thankfully this isn’t a game about nepotism in the police force, with Rohan’s shady past there to give the character a bit of depth and to shovel a bit of that lovable rogue archetype into the game’s protagonist. The result is a smart-alec dickhead that takes a while to warm to. 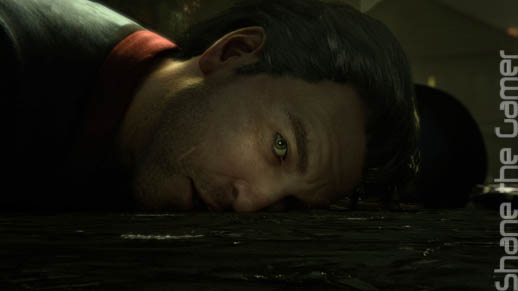 After the untimely death of his wife Rohan has become, as you’d expect, a bit of a loose cannon. Following a lead to the whereabouts of The Bell Killer, instead of waiting for backup he goes it alone and confronts the serial killer with catastrophic consequences.

Rohan finds himself being thrown through a top floor window onto the road below.  Getting to his feet and thinking that he narrowly escaped with his life, Rohan instead turns to see his unconscious body lying on the ground. Powerless to do anything he watches as The Bell Killer picks up his own pistol and fills him with bullets. As life slips from Rohan’s body the spirit-Rohan ascends to ethereal place where his dead wife, Julia, tells him that he is not ready to join her and that he is in limbo.

He then finds himself pulled back to Salem as a ghost. The only way that he can move on to the hereafter or whatever, is to solve his own murder and find out the identity of The Bell Killer. 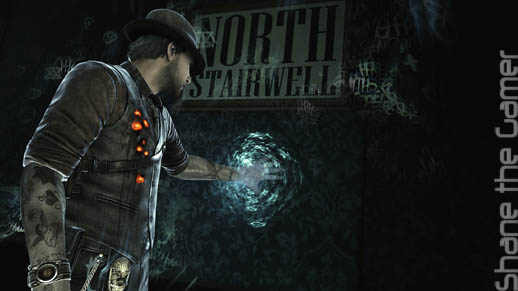 You’d be forgiven for thinking that the above all sounds a bit corny.

I’ll be honest, before I played the game for this review there was nothing about Murdered: Soul Suspect that appealed to me. The title is awkward and the promo art looked, well…meh. The premise – a dark, detective thriller with a supernatural twist where you solve your own murder – didn’t really fill me with excitement, either.

Even when I previewed the first hour or so of the game I was left with a pretty neutral view of the game.

Persistence is the key with Murdered: Soul Suspect, because as the game opened itself up to me it became a lesson in not judging a book by its cover. 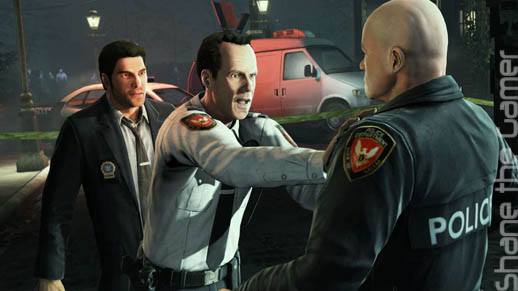 What we actually have here is a robust game with an interesting story to tell. The game sits somewhere between an interactive supernatural thriller and a point-and-click adventure.

It’s a credit to the developers for setting up a series of rules for the game and sticking to them. Early on a little girl explains to Rohan some of the things that he can and cannot do in this strange afterlife experience.

You may be a ghost, but you can’t just enter a property, you have to go through an open door or window. Once inside you are free to walk through anything. There are, however objects in this spiritual plane that cannot be traversed. They are like the ghostly echoes of structures and, being just as ghostly as Rohan, present themselves as obstacles. Same goes for outside with ghostly buildings long gone in the present day obstructing your passage. 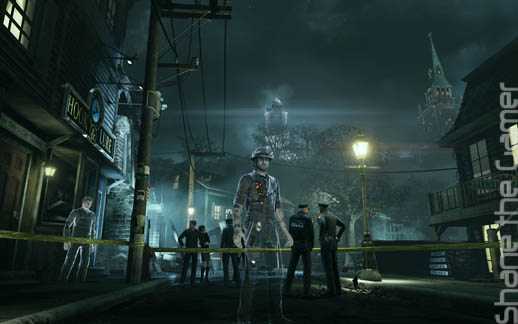 It’s actually quite amazing to see the ghostly remnants of the old town intermixed with the present day one. There’s ghosting boats down alleyways and even the ghostly visage of a burning house blocking the road.

As a ghost, Rohan is able to possess the living. Most of the time you can only read people’s minds and hear their thoughts; occasionally you can actually influence them as well. As well as possessing the unsuspecting citizens of Salem, you can also possess cats allowing you to get through tight spaces and climb up high.

The story moves you from location to location, usually terminating in an investigation area. You have to guide Rohan around the scene uncovering the clues. If you’ve played L.A. Noire, it’s kind of like that. 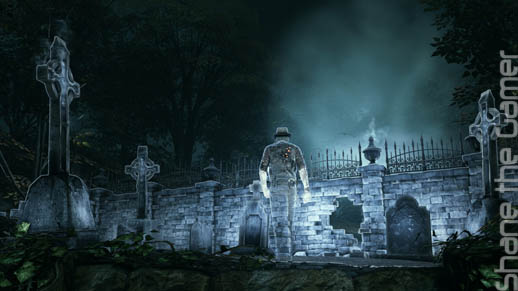 The game tells you how many clues there are. Some are relevant, some are not. Whilst it’s best to find all the clues, if you do happen upon the pertinent information before uncovering them all you can proceed anyway. Having found the clues, you then need to pick the correct one(s) to complete the investigation – which then usually unlocks a video showing what happened and allowing you to proceed.

There are ghostly apparitions everywhere. Most of them vanish as you approach, but some can be interacted with, either just for a chat or to offer up a side quest. These little side quests usually involve investigating and sorting out whatever issues the spectre has that are binding them to Earth. On completion of your investigation you see them ascending to the heavens. 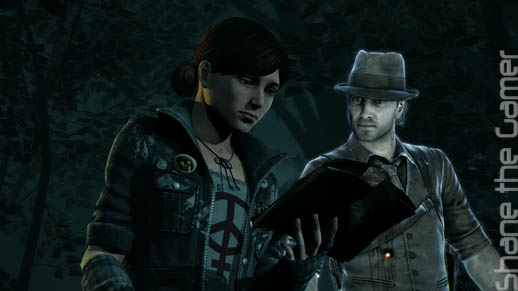 This limbo isn’t just the dominion of lost souls. Demonic spirits feed on the wandering dead. Acting like patrolling guards, demons pace up and down on a fixed route. They will not deviate from their path unless they see you or they are distracted. You can attack and kill them, but only if you sneak up behind them. They are best avoided. Thankfully Rohan has the ability to see these things through walls, so there’s no reason to stumble upon one.

You can hide, and to some extent move among the demons, via these kind of ghostly shadows that are everywhere. If you are discovered, it’s no good heading for the nearest shadow thingy as the demons will start actively searching for you. You’ll need to move fast and get away before the demon catches you and devours you soul, sending you straight back to the nearest checkpoint. 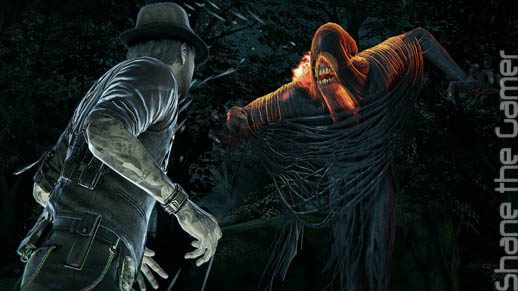 Considering the otherwise rather sedate way in which the game plays, the more action-orientated demon encounters rather interrupt the pace of the game. I’m not saying that they are a bad thing, but I can see some players that are more interested in the investigations and story finding the sudden transition from an adventure game to an action game a bit jarring.

Most of the game can be played at a fairly leisurely pace, and there’s loads to do. As well as the main mission and side quests the game is littered with collectables including items that must be discovered and collected to unlock new parts of Salem’s story.

As the game progresses Rohan unlocks other abilities like teleportation to keep the game feeling fresh, but really Murdered: Soul Suspect is all about the story. 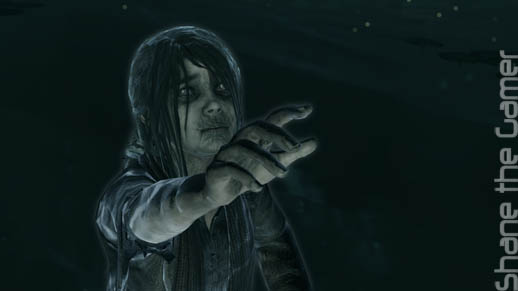 In order to get anything out of the game you are going to have to be invested in the game’s plot. If you don’t really care for a game narrative and are 100% about the gameplay you may find Murdered: Soul Suspect a little pedestrian as it’s not the most complex game.

I’ve been very careful not to reveal any of the story in this review as I’ve no intention of spoiling it. All I’ll say about it is that once it got going I found it very difficult to put the game down.

Visually, the game doesn’t really stand out. It all looks crisp enough on the PS4, but nothing to write home about. The cross-gen nature of the game (being available for Xbox 360 and PS3 as well as Xbox One, PS4 and PC), means that the developers were likely held back from providing us with a visual feast of epic proportions. 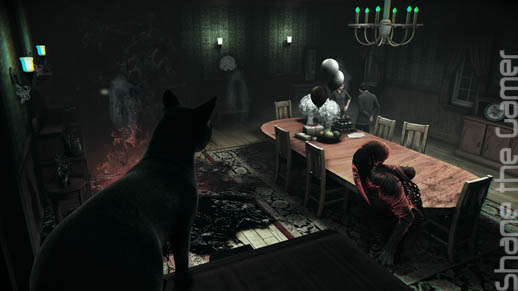 The result is a presentation that is adequate without being offensive to the eyes. The voice acting, however, is faultless, delivering the story perfectly (even if the lip syncing is a bit off).

If I had to offer up a genuine niggle with the game it was when reloading and continuing from a previous game a day or so later – I didn’t know what I was supposed to be doing. The game gave me the wrong prompt resulting in a confusing dash around the police station before stumbling on a cut scene that put me back on track. I did come across a few other bugs with dialogue not playing, but nothing game breaking.

Murdered: Soul Suspect is a little gem of a game. It reminded me of the fun I used to have back in the day with point-and-click adventures. I really enjoy a decent story in a game and found myself swept away in Rohan’s tale. 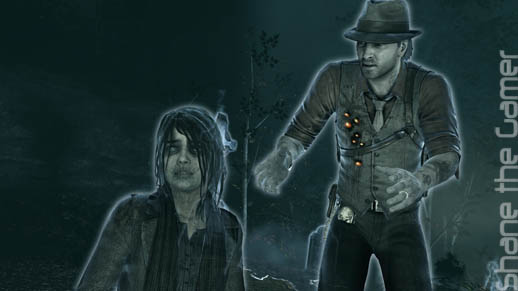 This is a game that I was not looking forward to playing, but it managed to completely turn me around. It’s a shame that the game’s title is such a mouthful and the box art looks so awful, as I feel that Murdered: Soul Suspect isn’t going get the credit that it deserves.