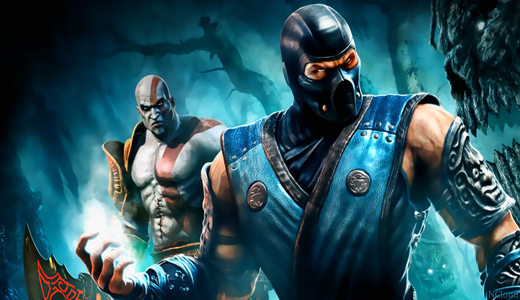 The greatest, most known fighting franchises ports its latest chapter over the Vita, with a full cast of characters, including the otherwiseable DLC. 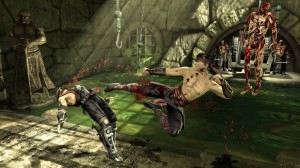 All of the usuals feature, Scorpion, Raiden, Sub Zero, Mileena, Kung Lao and so on. Over 20 playable fighters, with the inclusion of Kratos and my favourite, Freddy Kruger.

Quick Play has thankfully been kept, where you have free reign of any of the fighters within the selectable Menu and randomly generated bouts ensue.

You work your way up a column (as we have seen with nearly every other MK chapter) and the battles get increasingly more difficult.

Challenge Tower offers a varied amount of Challenges (upto 300) where you are rewarded with Koins upon completion), and there is also Training Mode.

Retelling the events of the past three titles but in a new timeline where Raiden receives a visual and disturbing message from his future self, where the Battle of Armageddon has occurred and all combatants are slaughtered with Shao Kahn the victor, allowing him to rule all realms.

You begin the narrative side of the 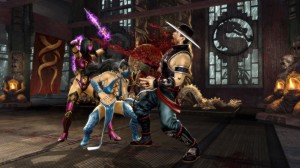 game with Johnny Cage and as the story progresses your playable character is decided upon the goings on within the story.

You will eventually take on almost every character at some point and matches differ from 1-1, 1-2 and 2-2 tag.

Environments in Story Mode are reflected upon where within the MK realm the story is upto, and Quick Play uses a random selection of these Levels. All 2D with non destructible elements, unfortunately.

X-Ray has also been retained, as we saw with the console version. You have an X-Ray bar that fills up with the amount of combat moves you undertake, the variation and the amount of combo’s and/or hits in quick succession. There are three parts to the meter, each part once full can be used for a special attack, or once this bar is totally filled, hold down the two shoulder buttons when facing your opponent and literally see the damage being inflicted as you blow super powered hits to crucial regions of your enemy. 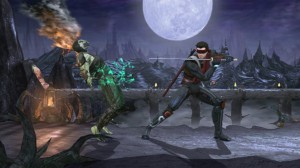 MK on Vita also features an online/multiplayer mode and gameplay rewards you by way of Kurrency. This can be squandered by in-game Unlockables within the ‘Krypt’.

The most noteable change is the ability to cause Fatalaties (or Babe-alities) by way of touching the handheld consoles screen. But it’s not as easy as that sounds.

You need to know the correct motion to swipe the screen with when the ‘Finish Him’ comes up.

Having played this for a few weeks now, I managed to fluke one fatality and have since not been able to repeat it.

Playing through the Training Mode will educate you on how to do these effectively, or like me, you can just try and wing it.

The Vita has been with us gamers for 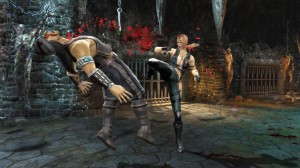 some months now, and while the volume of games for it is still miniscule and slow to release, Mortal Kombat is a necessity to any Vita owner.

With the amount of titles I receive to work through and release calendars that I receive, I had been waiting for this one eagerly. It did not disappoint.