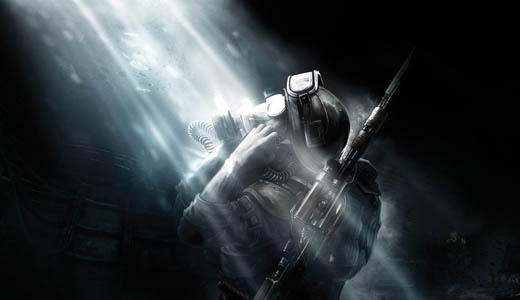 I knew it had something to do with with Russia. But other than that I had no idea what Metro: Last Light was about when I turned up to the hands-on preview in the basement of an old Sydney hotel.

With gamepad in hand I was advised that I should try playing the game in Russian with English subtitles. It didn’t take long to understand why. The gruff Russian language perfectly complemented, to my western ears, the foreboding and war-torn world of Metro: Last Light. 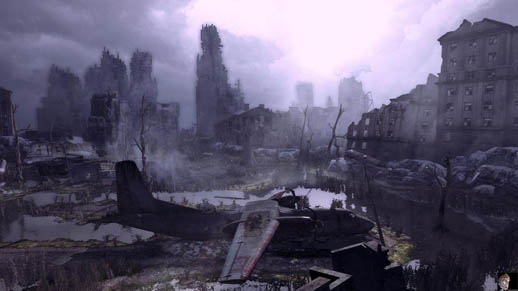 The game definitely has a certain feel to it.  Anyone who’s watched Timur Bekmambetov’s Nightwatch and Daywatch will understand me when I say that this isn’t your usual Western Hollywood-style first-person shooter. It’s more S.T.A.L.K.E.R than Call of Duty; bleak, unglamorous and miserably realistic.

As the game started I was introduced to this murky post-apocalyptic Russia by way of a scene in Moscow’s old metro system; where human society was now holding out beneath the ruined city, above. I was guarding a barricade with a few of my a few colleagues. In the distance there was gunfire and flickering shadows on the wall suggesting that something awful was going on just out of view around the corner of the tunnel. 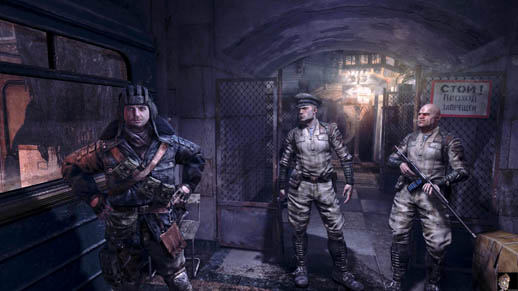 Out of nowhere a blackened creature appeared, strange and morphing- not quite in focus. As I fired at it and it fell dead to the ground the resultant corpse was, confusingly, that of my comrade. Another creature attacked me. Again, dying beast and leaving a human form on the ground. With horror my first-person character looked at his bloodstained hand, realising that he had inadvertently slaughtered his own people. At that point the games protagonist, Artyom, awoke from his slumber. It was all just a dream.

A cheap shot, perhaps, but a necessity in a game that, to be honest, took a while to get going. 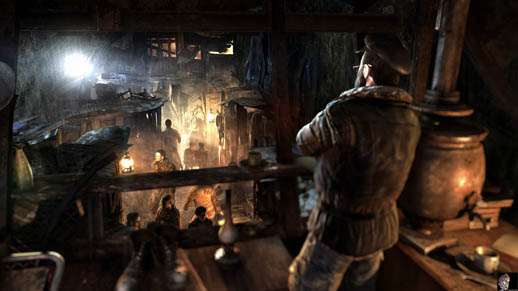 After a nuclear holocaust, Moscow’s survivors fled underground city’s metro system, where they preserve society as best as they can. Children play and people get on with their lives, whilst the surface remains out-of-bounds; a dangerous radioactive wasteland.

For a reason that escapes me now, I was charged with going a mission up to the surface. Handy really because as fascinating as the subterranean society was, it was lacking in a bit action and I didn’t sign up for a game of Sim Post-Apocalyptic Society. 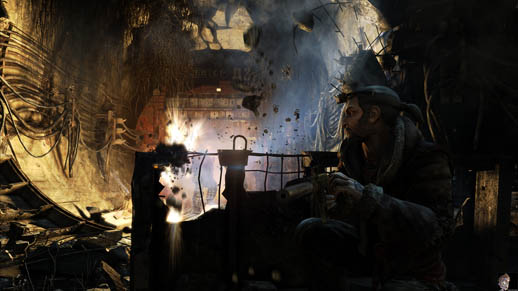 Arriving at the surface hatch my feisty female companion told me, in Russian with English subtitles, to put on my gasmask; apparently this is all that is needed to as protection in the radioactive wasteland. Stumbling out into the ruins of old Moscow, mud splattered onto my mask and the game prompted me to wipe it using the gamepad’s left bumper button. A nice touch, indeed. 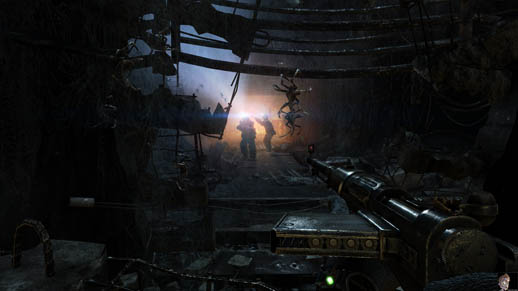 As atmospheric as listening to the Russian language was, it was next to impossible to read subtitles in the middle of a fire-fight. A quick trip back to the main menus had me switch the spoken language instead to the heavily faux-Russian-accented English. Less immersive, maybe, but a lot more practical.

After dispatching some wolf-like mutant creatures I found a dark one and, with the help of my comrade, tracked it as it fled through the ruins. In finally corning the creature I was treated to a strange vision before passing out. 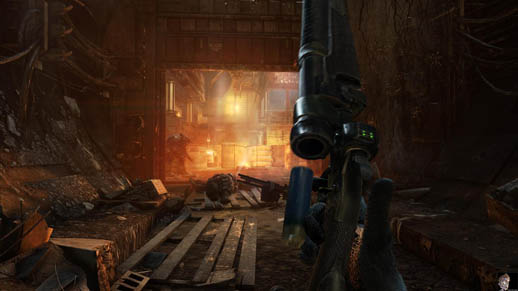 Exploring post-apocalyptic wastelands and dispatching mutants is all fine and dandy, but it is something that I’ve done before and it does get a bit samey after a while. Metro: Last Light expands on the genre by exploring the much more interesting effect of a cataclysm on society. It this game,  isn’t just the mutants that you need to worry about, it’s the other survivors.

Whilst blacked out I’d been captured by the Nazis of the Forth Reich and taken to their totalitarian stronghold in another part of subterranean Moscow. Along with another prisoner, a communist from the Red Zone, we escape our captors and start to make our way out of the prison. 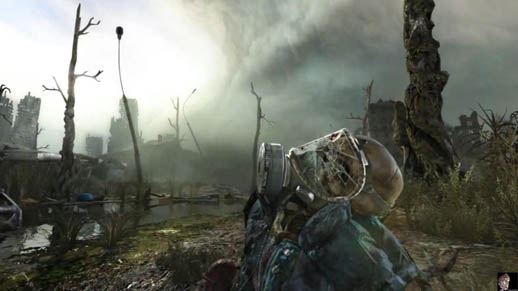 It was at this point that the game started to get my attention. Up to now the game had come across as a pretty generic first-person shooter. Having not played the previous game I had no idea what to expect, but with the escape I was introduced to the games stealthy take on the modern shooter.

Our daring escape had us flee into a large shaft with prison cells recessed in to the sides. The prisoners bugged me to release them; offering up an optional moral choice, leave them or free them. Separated from my communist friend, I needed to dispatch the guards without raising an alarm. I did this silently using throwing knives and melee attacks from behind. It took a few attempts, as I clumsily got spotted by one guard as I took down the other; the resulting gas sending me back to the last checkpoint. 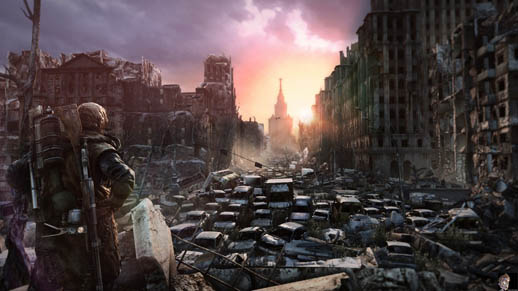 It was only matter of time before the Nazis caught one of us and, surprise, surprise it was my companion. My life indebted to the communist, I have no choice but to revise my mission to one of rescue and then escape.

The game employs a very realistic stealth mechanic that’ll have you on the edge of your seat. In the proverbial lion’s den, Artyom was easily outmatched by Nazis who would shoot me on sight. As I made my way through the stronghold I kept to the shadows to avoid detection or enter into any unnecessary shoot-outs. A light on my wrist indicated if I was visible or not. In brightly lit areas, without shadow, I could shoot out bulb or switch of power. From the darkness I was able to take out guards one-by-one without raising alarms which would draw reinforcements. 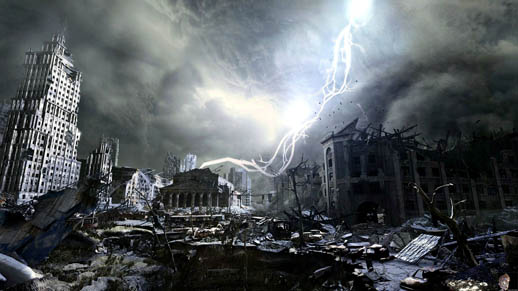 It was very enjoyable to play a shooter that relied on more than just running and gunning. At the same time, the stealth gameplay is not just there for the sake of it; should I have wished to go in guns blazing I could’ve, but I’d have had to be prepared to run out of ammo and face off twice the number of enemies.

After rescuing my fellow escapee, we headed to the surface. This time I was treated to better view of the ruined city, a very impressive sight with familiar-looking buildings poking out of the rubble. Again, I was attacked by the mutant wolf-things from earlier as we crossed the wasteland to the Red Zone. The preview ended just as I was about to see a cabaret act courtesy of the surprisingly jolly communists. 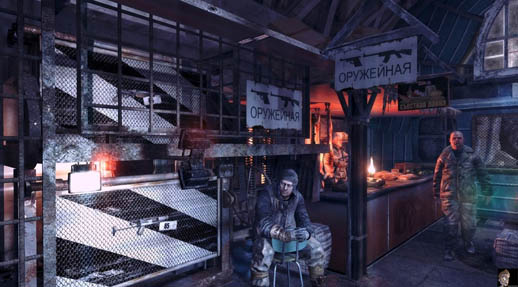 Metro: Last Light comes across as a refreshingly gritty take on the post-apocalyptic genre. The stealth mechanics are logical and rewarding to play with. I enjoyed, and was intrigued with, the idea of all these contrasting societies, with conflicting ideals, living separate to one other in the abandoned metro system.

Unfortunately the preview was on Xbox 360, and not PC, so I wasn’t seeing the game at its best. Anyone that’s read any of my recent reviews will know that I’m really starting to notice the gulf of difference between recent PC releases and their console counterparts. That being said, Metro: Last Light doesn’t look at all bad on the 360.

It is difficult to gauge a whole game on a couple of hours of play, but I like what I saw. It made me feel like I’d really missed out in overlooking the first game, Metro 2033, which I’ve since purchased for the PC via Steam.

Metro: Last Light is definitely one to look out for when it is released on Windows PC, Xbox 360 and PlayStation 3 on 16th May.