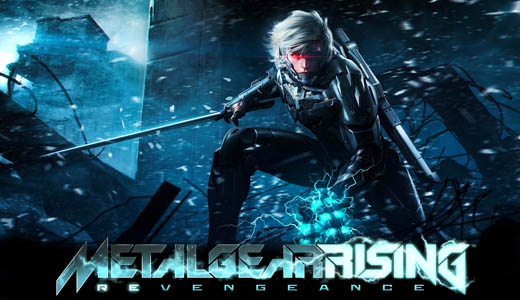 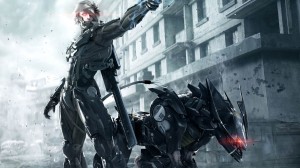 Metal Gear series has previously been all about being sneaking about, Metal Gear Solid: Revengeance presents itself as an action-fuelled departure from what has gone before. And the genre isn’t the only change.

Traditionally, Metal Gear games have been carefully nursed into existence by the nurturing hands of Mr Metal Gear, Hideo Kojima. Not so with Metal Gear: Revengeance, whilst without a doubt carrying Kojima-san’s hallmark, has been developed by fellow Jap developers Platinum Games Inc. who were also responsible for the mental Bayonetta and more recently Vanquish.

Another surprise was a Metal Gear that once again featured that white-haired prat, Raiden as the main character; the guy who very nearly ruined Metal Gear Solid 2: Sons of Liberty for everyone. I for one was all WTF back in 2001 when I thought I was going to be playing Metal Gear Solid 2 as gravel-voice Snake but instead played most of the game as poncy newbie, Raiden. 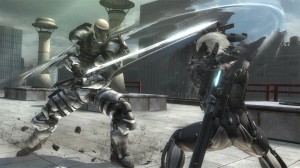 Raiden’s surprise appearance in Metal Gear Solid 5: Guns of the Patriots was a bit better, what with him all pimped up and cyborg-looking. Presumably due to having his arms and legs ripped off by a disgruntled Metal Gear fan unable to get over his involvement in the Big Shell incident. For Metal Gear Solid: Revengeance, Raiden’s cyborg look is even more hardcore. 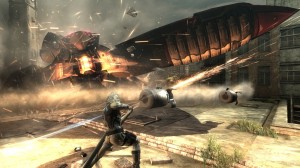 start of the demo we introduced to the members of Raiden’s team as he is flown to the mission in Abkhazia. As with previous Metal Gear games the Codec beeps to signal the start of a (usually) long-winded, exposition-laden, radio transmission. Via Codec, Boris takes Raiden through the mission parameters, explaining the gameplay conceit of sealing off the area during combat to “avoid collaral damage”- more like to stop players running away.

I expect the other members of the team: Kevin, Courtney and the sinister character called Doktor to all offer similar and equally lengthy pearls of wisdom throughout the game. Thankfully for the demo it is only Boris that communicates with Raiden. No doubt there will be some angst-ridden and breathy dialogue between Raiden and Courtney in the full version of the game.

And onto the gameplay. The demo starts with a bang as Raiden is ambushed by camo-wearing cyborgs as soon as he reached the shore. 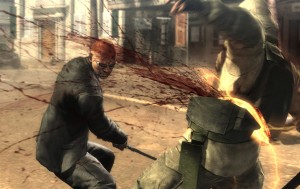 The combat comes in two flavours; a Devil May Cry-style Japanese hack ‘n’ slash mode and the more refined blade mode. With some basic button-mashing Raiden can jump about and kick arse with lightning reflexes. But press the left trigger and you get to take control of Raiden’s Katana, adjusting the swing and carrying out precise strikes to chop opponents up into custom-sized sushi lumps. Blade mode offers a very satisfying bit of gameplay that is also pretty full-on with gore. The blood ‘n’ guts is cranked up to eleven with a combo-move that sees Raiden pluck out his fallen opponent’s spinal cord,  bursting it open in his clenched fist to regain health. It looks pretty disgusting, but at the same time is guaranteed to raise a smile (if you share my dark sense of humour).

Fan of the Metal Gear series will be right at home with the HUD, which features the series staple Soliton Radar as well as all the alerts. 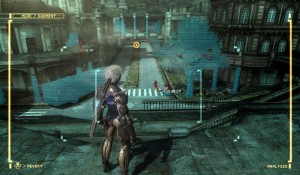 difference this time is that triggering an alert will have you directing engaging the enemy rather than having to run away like Snake.

Graphically the animations are all very smooth Metal Gear Rising: Revengeance is full of detail, with lens flares aplenty, all overlaid by a nice film grain to the give the game a unique art style.

As Raiden head inland he happens across a local being tormented by the cyborgs, some of which are armed with rocket launchers. A few frantic beatings and choppings-up later and my assailants were resting in a neatly sliced pile, sans spinal cords.

Unfortunately the local was also lying dead on the ground. War is hell.

Heading towards the next area – and it was a bit obvious that I was entering the next challenge area- the two guards looked like easy victims. 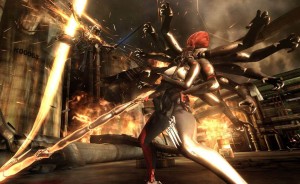 On a approach there was a very familiar sound as a Gekko, one of those weird black-legged cyborg mechs from Metal Gear Solid 4, jumped from a roof. Again frantic button-mashing combined with a few precise strokes with Raiden’s katana, courtesy of blade mode, and the Gekko was down.

The next area presented me with a few more Gekkos to best, which Raiden duly dispatched style and aplomb.

The demo’s finale pitted Raiden against a rather cock-sure dog-mech creature with a fierily whip-thing.

During the bout the creature matter-of-factly stated just how super it was and how dead Raiden was going to be at the end of it all. One last time a kinetic combo of that great Devil May Cry-style combat coupled with a few well-placed chops of Raiden’s sword and it was all over. 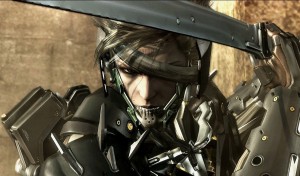 It is difficult to tell exactly what we are in for from a twenty-minute demo.

The familiar-looking HUD and story-telling style cement the game firming in Metal Gear territory. The Hack ‘n’ slash action is great fun, but the blade mode really sealed it for me. I just loved chopping stuff up.

It is pretty clear from the melon-filled tutorial that the developers want players to exploit the blade mode as much as possible. And, having environments were everything can be sliced u,p you end up doing just that. It is amazing just how many pieces you cyborg opponents can be sliced into

Playing the demo really fired me up for Metal Gear Rising: Revengeance.

Form the adrenalin pumping combat action to the precise control of the blade; it makes for a refreshing change from Metal Gear’s usual stealth antics. 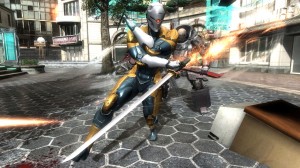 Different, but yet so familiar it is still, clearly, Metal Gear. The game echoing what has gone before, including Kojima’s weird storytelling, but at the same time taking the series someplace new and fresh.

I can see Metal Gear Rising: Revengeance being a game changer for the series and I can’t wait to get my hands on it.

Metal Gear Rising: Revengeance is out in Australia on 21 February and in New Zealand on the 22 February for the PlayStation 3 and Xbox 360.