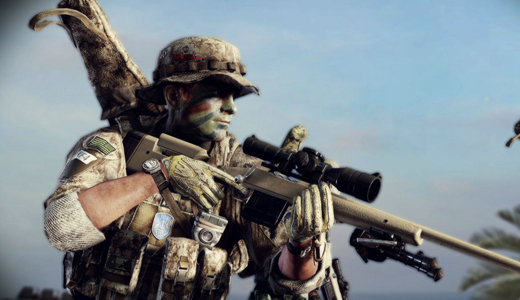 In 2010 EA dusted of their veteran WW2 Medal of Honor series and dragged it into the modern age. The rebooted Medal of Honor found itself sitting uncomfortably between Activision’s Call of Duty: Modern Warfare series and EA’s own Battlefield Bad company.

It wasn’t a bad game by any stretch; in fact I found it quite good and I had high hopes for the inevitable sequel, which turned out to be Medal of Honor: Warfighter.

Medal of Honor: Warfighter continues the real-world combat theme, as established by the last game. 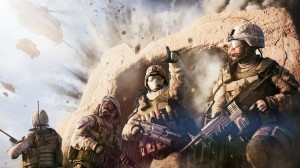 exploits of a group of Tier 1 Special Forces operatives, we are taken on a tour-de-force of the world’s combat hot-spots. From the sun-kissed mountains of Yemen, the storm-ravage Philippines and on to the sand swept streets of Dubai, Medal of Honor offers players a radically diverse selection of combat environments.

Developers, Danger Close have, with Medal of Honor: Warfighter, distanced their game from its peers by providing us with a more realistic, gritty storyline. As a result the game passes on the opportunity to create a cinematic Michael Bay inspired romp, a la Call of Duty, leaving us with a somewhat subdued experience. 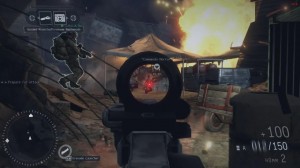 The single player campaign starts with US Special Forces carrying out an operation in a Pakistani dockyard. When their actions unwittingly set off a huge explosion, US operatives Preacher, Mother and Voodoo uncover a plot to bring highly explosive PETN into the US via the Philippines. The plot twists and turns leading the Special Forces operatives around the world as they track down the as a terrorist leader known only as The Cleric.

The game doesn’t seek to hide behind some politically correct generic enemy. It is pretty obvious that you are going after al-Qaeda and killing rather a lot of suitably attired middle-eastern gentlemen. This may not sit well with some who are in denial about the fact that this sort of thing is going on right now; and that their tax dollars are paying for it. Like I said it’s gritty.

In an attempt to 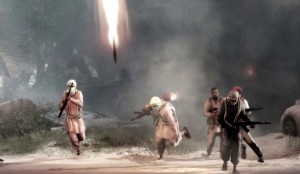 add some humanity to a game that involves the death of hundreds, is the game’s emotional sub-plot.  This tells the story of those that are left behind, and how this affect the relationship that game’s main protagonist, Preacher, has with his family. It is a brave angle to take and even though it is a bit lumpy in places, it is an interesting departure from the usual testosterone pumped FPS narratives.

The mission structure in the single player campaign is a pretty generic traverse from A-to-B, with you and your AI colleague(s) shooting anyone in the way. Whilst the game can’t really boast the world’s finest enemy AI, it does its job, even if the scripted enemy spawn trigger points are painfully obvious sometimes. The game’s combat doesn’t bring anything new to the table, but at the same time it doesn’t take anything away. 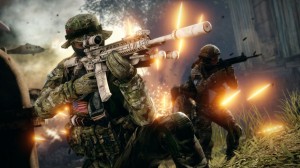 The one man army of the old WW2 Medal of Honor games may be gone, but your fellow soldiers don’t come across as particularly effective. Many a time during the game they seems to miss every shot, I got the feeling that without my help the two sides would continue to fire at each and keep on missing for eternity.

The hands off attitude of your team mates couldn’t be more apparent that during the numerous breach sequences. Your teammates are happy to kick the door in and throw a flashbang, but take a step back when it’s time to actually take out the bad guys. There were a few occasions when I could have done with some help. 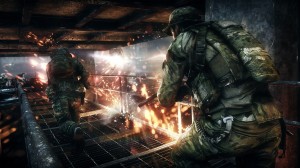 the most part, Medal of Honor: Warfighter is just the usual FPS shooting gallery, that is not all that the game offers. As is becoming increasingly popular in modern combat shooters, we have a few levels were we do something completely different. As you’d expect Medal of Honor: Warfighter features the now obligatory aerial shooting sequence; this time we are hanging off the side of a helicopter taking pot-shots at the hapless fellows in their sandy forts. They should have known better than to challenge freedom and the might of Uncle Sam’s military machine. It is fun, but a little one sided.

As well as the aerial combat Medal of Honor: Warfighter offers another change of pace, in what I believe to a combat FPS first: a of couple bona fide driving sequences. 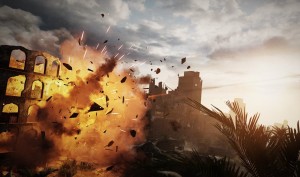 The first involves chasing a fleeing gunman through the streets of Pakistan. It did remind me a bit of the James Bond game, Bloodstone, only a bit more fun. The two cars weave through tight alleys, marketplaces and heavy traffic. Lag too far behind and it’ll be game over.

The second driving segment turns the tables with Mother and Preacher, having kidnapped a terrorist banker, being pursued across a Dubai in middle of a sandstorm. There’s even an element of vehicle based stealth gameplay!

If you don’t mind games mixing genres you are going to find, as I did, these racing game inspired sections of the game a welcome addition. If you are in in just for the FPS action I’d understand if you find these sequences a little jarring. 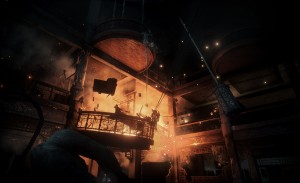 For all that realism there are still some glaringly obvious times that scream out bullshit. I would hope that even the most dedicated would-be terrorist would understand the risks of using grenades in the tight corridors of a ship. Whilst the resultant explosion from a grenade would mean certain death for any player standing too close, the lack of any collateral damage, even a bit of blackening on the wars raises an eyebrow. If you are going serious with your shooter, go serious (even if you do have a regenerating heath bar). 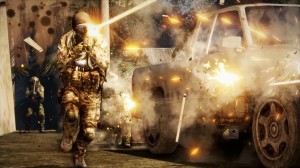 The single player campaign is a bit short. Just as I was starting to understand exactly what was going on, that was it; game finished. As with the last game, the final mission isn’t a Hollywood-style extravaganza, the game ends with the objective accomplished and a final cinematic to wrap it all up.

Graphically, Medal of Honor: Warfighter performs as you would expect from a game that uses the now legendary Frostbite 2 engine. It’s got all that nice dirty lens flaring business going on, although it doesn’t seem to have the same visceral intensity that I found so cool in the last game. It never felt like all hell was breaking loose. Unlike the Battlefield games, don’t expect buildings to fall apart, even though Frostbite 2 can do that, it’s just not that sort of game. 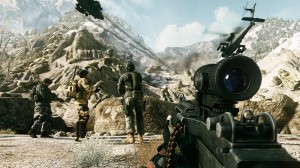 lacks the impact that I remember from the last game. Previously the ambient combat sound effects really felt as if was all going off around me; sounding more like real explosions than Hollywood special effects; I can’t say the same this time. The game does, however, have an awesome soundtrack, compete with a rousing theme tune.

The multiplayer game features the usual cornucopia of modes that you’ll recognise form every other FPS. 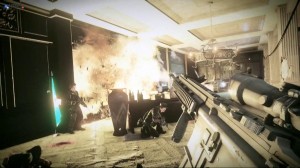 We have your usual Team Deathmatch, the Battlefield inspired Sector Control, the capture the flag-styled Home Run and the demolition game modes Hotspot and Combat Missions. Whilst you can pick your own sever, there are a series of playlists that can be selected to offer the right variety of game types to suit all tastes.

Medal of Honor: Warfighter’s multiplayer mode is an acquired taste and took me a while to actually get in to. The main problem I found early on was with all the detailed little knick-knacks that litter the maps; knick-knacks that my crack Tier 1 special forces operative had a tendency to get stuck on. I’m used to CoD’s grease lightening movement and so I did’t expect to have to jump over stuff that my man should be able to run through.

But in time, once 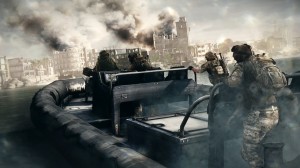 I got used to Warfighter’s foibles, the multiplayer game revealed itself to be a more grounded and strategic game than its more action-orientated stable-mates. This is not run and gun multiplayer experience. Rambo-style tactics will get you killed. The game has a slower pace that may put of those more used to the Call of Dutys. The tactical nature of the game and the fireteam buddy system, that see you automatically paired with another player, encourages a higher level of player co-operation than most other online shooters.

As you would expect there are the usual awards for certain in game actions and equipment unlock as you level your soldier up; who, indecently is picked from a selection of Special Forces operatives from around the world. 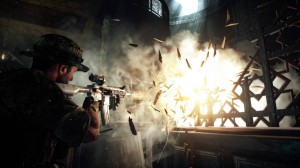 Medal of Honor: Warfighter’s multiplayer game uses EA’s Origin system the same as Battlefield 3. This means that all your stats are available on your own specially created Battlelog web page. On this same page you can participate in the Warfighter Nations mini-game. At the end of every online game players are awarded with tokens that can be allocated against a chosen county. Every week the country with the most tokens wins that round of Nations. For every sequential day played online players get a multiplier that encourages them to come back for more.

Medal of Honor: Warfighter tells a very grounded tale of those anonymous men the risk their lives for our freedom. The game also tries, albeit a bit ham-fisted to impart a little of what is like for the families of these men that go to war and may not return. 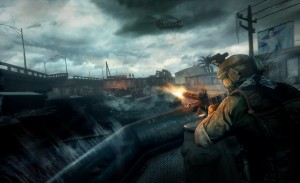 campaign may not be up to the high standard of the Call of Duty games, but it is a lot more realistic. But in my opinion it plays a lot better than the similarly themed Battlefield 3 single player game.

As I mentioned earlier the multiplayer game grew on me, in a similar way that it did in the first game. It takes a bit of getting used to the more reserved pace and the cluttered environs, but the more I played the more I wanted to play. Flicking back to Modern Warfare 3 felt like I was a gun toting ballerina in roller-skates, compared to Metal of Honor’s more laboured movement.

Whilst Medal of Honor: Warfighter isn’t the Call of Duty beater that I was hoping for this time out, it is still an accomplished and entertaining game; both single player and, more importantly, multiplayer. 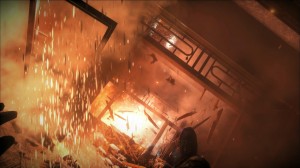 My initial disappointment with the game dissipated the more I played, revealing a modern combat FPS that is its own man in what is a fast becoming an overcrowded genre. Fans of Call of Duty may enjoy the change of pace that the game offers and Battlefield fans may like to try Medal of Honor: Warfighter’s more up-close-and-personal gameplay.

Either way, if you are a fan of modern combat FPS games, Medal of Honor: Warfighter is worth your time. 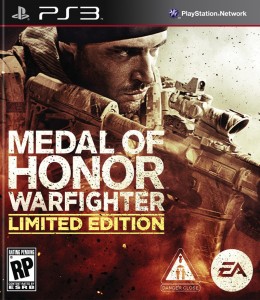