Lords of the Fallen – Review 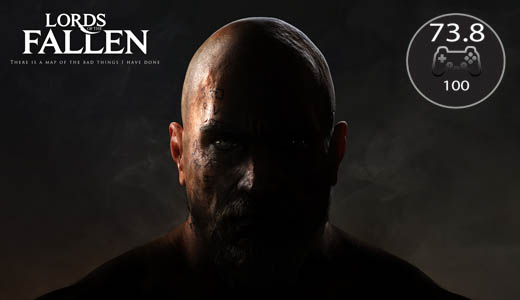 CI Games have made their own attempt at a Dark Souls type game with Lords of the Fallen. This third-person action role-playing game is available on PC, PS4 and Xbox One.

Having only dabbled in Demon Souls, which ended in me too terrified to continue past the first Level, made me a little more than apprehensive picking up a title of similar nature. Nevertheless I was interested all the same to give this title a go.

Starting up a new campaign has you deciding what style character you will be. There are three character classes, Rogue, Warrior and Cleric. There are also three magic styles to choose from and these align nicely with the three class types available. You however, are not limited to these combinations. 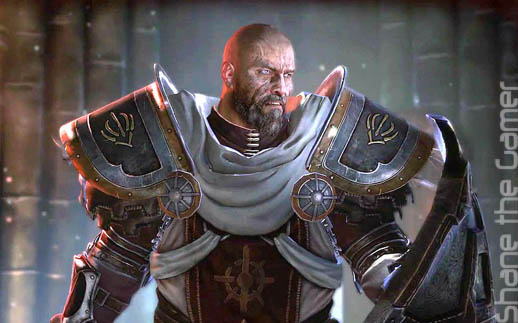 The intro sequence is impressive enough but then this is all lost as soon as the game commences.

Busting through the door of some monastery, you are introduced to Harkyn, a branded criminal and our anti-hero, who has been released from prison by some dude named Kaslo.

This Kaslo believes Harkyn has what is necessary to defend humanity from some imminent threat. You play as Harkyn and he isn’t exactly a character bursting with personality. During dialog between characters you are given conversation options and none turned out to be the nice or better thing to say. 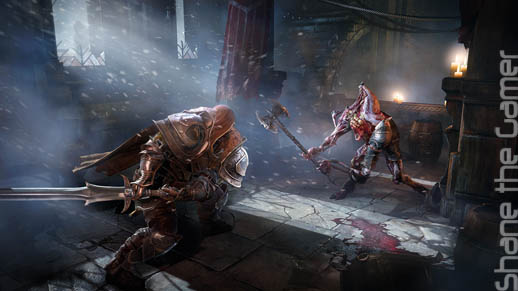 The graphics here are quite pretty, while the environment itself is more bleak and uninviting; it is all detailed and intimidating. The environment is quite elaborate as has a lot of places and secret areas to unlock and explore. You are generally free to roam the entire area and doing so is advised as there are many items and chests waiting to be pried open.

Chests usually contain new equipment with the odd item to increase the amount of health potions you carry or sealed runes. Runes can be allotted to certain equipment with open slots. This may increase a certain damage type, increase defence or your overall capacity.

You can spend experience when unsealing runes to increase the chance of getting a higher quality one. 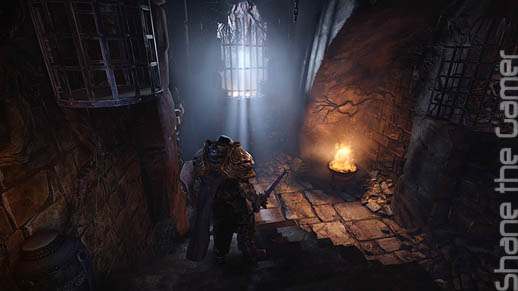 There is also some freedom with equipment allocation. Any type of equipment can be assigned to your character however it may not have full usability if the right attributes aren’t up to scratch.

The leveling up mechanic is different to most action-RPGs. You earn XP from killing enemies and finding hidden items.

The difference is this XP can be lost in the event of your death. 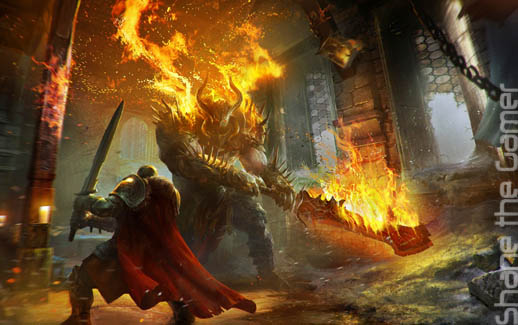 It can be claimed back if you make it back to the point of your death in time. This gives ample motivation to not die. Thankfully the game isn’t too harsh on those of us who just love dying.

You can bank your XP at the check points scattered sporadically around the place. When activated they save your progress and replenish your health and health potions. The replenishing of health potions can be depleted and takes a while to regenerate. 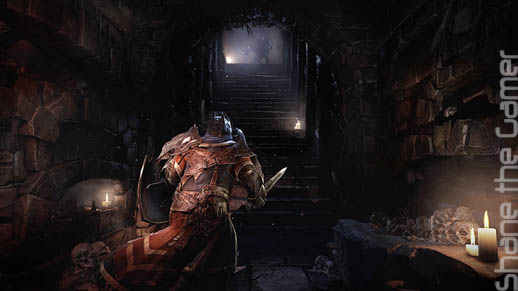 Check points also allow you to allocate your XP to either abilities points or magic points. Mind you, you need enough ability points in the Faith attribute to actually use the magic points.

You earn one ability point per level and you have to allocate it wisely to the attribute that will best enhance your chosen class and play style. There is some motivation to carry a large amount of XP on you. It is risky but you are more likely to get better item drops from enemies. 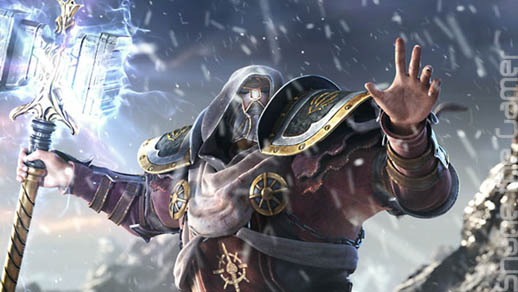 Combat has a few aspects to it. There are two basic attacks; the quick attack and the slow but more damaging one.

Then there are the defence type moves. You have a block and a dodge roll. Both of which you will use very often. After a little bit of story progression you unlock gauntlets which are generally magical ranged attacks.

Lastly there are magic abilities which initially don’t really count as any form of attack as the first one you unlock is just a dummy to distract the enemy. With level progression the magic abilities do become more useful. 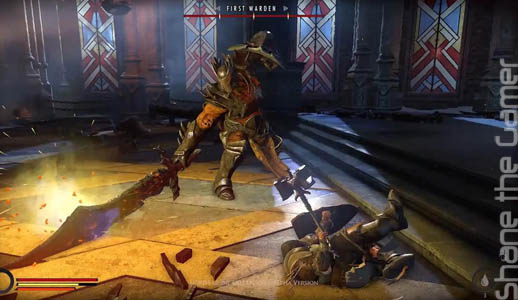 My only issue with combat is the seemingly slow response from command to action.

Even with the quickest weapons and character it all seems to not be up to speed, so to speak. Other attacks are deliberately slow, as with bigger weapons and magic attacks but I couldn’t imagine using these on a permanent basis as enemies, even with the speed my character had, seem to be faster. 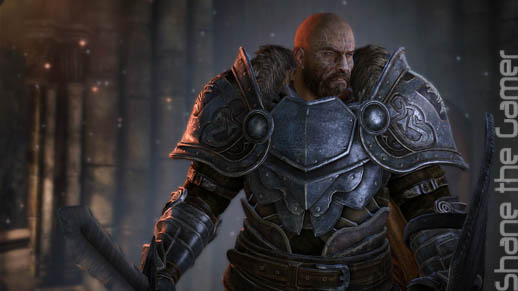 Enemies you encounter slowly begin to vary and also increase in difficulty as you move through the environment.

Some enemies proving to be the bane of my existence even more so than some boss battles. The bosses require certain and sometimes varied techniques. As their health bar decreases they can alter the attack pattern and require you to adjust accordingly.

These I found to be a good and fair challenge. Find the pattern and poking holes when it was safe, made the final defeat satisfying, even if I died I few times in the process. 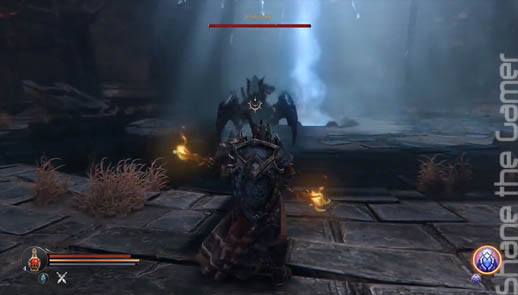 The main challenge with enemies is the first time you verse them, after you figure out how to beat them it becomes easier.

The main useful strategy is to never face more than one at a time. Drawing them away from each other and then taking them is the best approach.

One particular frustrating obstacle are areas where you need to jump. This can’t be done without sprinting beforehand and is always followed by a roll.

This was an unbelievably annoying way to die. It also was rather impractical and didn’t make me feel particularly skilled when and if I made a gap. This mechanic could have been implemented better. 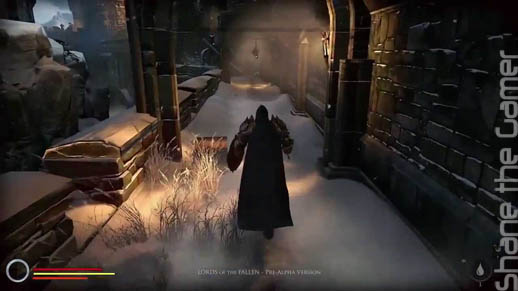 Lords of the Fallen offers a lot of depth from a gameplay perspective if not so much from a story or a character point of view.

It maintains decent challenge that does reach a tedious level on some occasions. The graphics and sound definitely help immerse a player and items and chests will keep you exploring.

Some mechanics bring down the experience but if you want something a bit dark with more than just a hack and slash experience Lords of the Fallen isn’t all that bad.