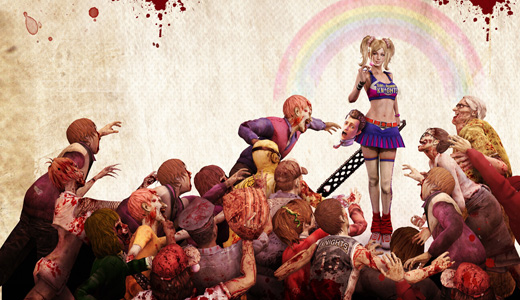 Innuendo’s, candy on a stick, a floss-like G-String, cheerleaders, chainsaws  and zombies – all add up to one excellently awesome, yet bizarre game.

Sex, candy and blood, together at last.

Awaited eagerly by many gamers that 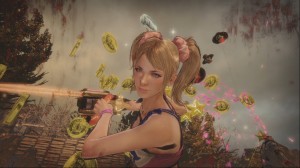 I spoke to over the past months, Lollipop Chainsaw sees you embark on a hack n slash romp as Juliet Starling, former Cheerleader of Romero High School.

Blonde but not dumb, she descends from a family of Zombie Killers. By day a cheerleader, by night a vanquisher of the undead.

Everything starts out as normal to begin with, Juliet is running late to meet her boyfriend, Nick Carlyle in the local park. As she makes her way there a Zombie Apocalypse breaks out.

Chainsaw in hand (a superbly customized one at that), she decapitates Nick and with a bit Lollipop magic preserves his life as a head strapped to her waist.

The decaying make their way towards the High School, where they begin to kill off and infect students and teachers alike.

Your goal? Save those in the school grounds and save the town. 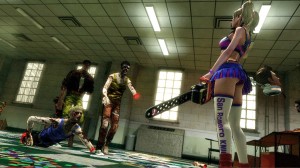 The zombie hoard is led by a group of super undead beings, Rock n Roll Lords of sorts. This reflects the eternal war of Pop vs. Rock I guess…

These super Zombies are the Bosses that you will encounter within each area of the city and they also represent differing aspects of Rock music; Punk, Heavy Metal and so forth.

They were conjured up by a malevolent wanna-be supreme being, a former Goth classmate of Juliet’s called Swan. He has the idea that he would control them. But nothing can control Rock n Roll. Or the undead.

Luckily Juliet is extremely flexible (I am sure there are other connotations to that) and through her Cheerleading abilities she can fly kick and punch with the best of them. She can also ‘Power Up’ to perform explosive area clearing damage. 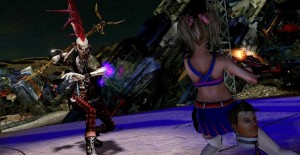 not you will use your Chainsaw to slash zombies, but applying melee with weapons will reap more Stars.

Stars are required in order to purchase upgrades, to the likes of new costumes for Juliet (yep they get more revealing and quirky), more abilities, better combos and upgrades to your Chainsaw.

Lollipops are how Juliet stays alive. These stay within an inventory of sorts and you will use them as your life bar gets low.

Nick joins in too, albeit, he is just a head dangling and swaying from Juliet’s belt.

You will come across headless zombies. When you do, place Nick’s head on top and through a series of key button presses, you have control of Nick and the zombie body. This is helpful to take down larger enemies. Usually anything that involves the usage of Nick is a Mini-game to begin with.

Within the game’s Menu and/or a conveniently placed kiosk you will find unlockables and Bonuses, to the likes of Audio tracks that can be purchased using Stars earned or found. 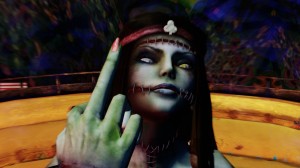 The Bosses are harder than hard and the dialogue accented with adult themes will keep you amused and definitely distracts you from the repetitiveness of hacking and slashing.

Areas within the game are mostly free roam and there is some environmental destruction to be had. When you can, destroy what you can as this will reveal secret pickups and more.

Lollipop takes a few well known and over used genres and fuses them together with a twisted and quirky style.

Some will not know what to make of it, while others (like me) will continue to play, play, play.

My suggestion is take it for what it is and when your browsing for games to play, don’t just pass by this one. Tastefully wrong, but very, very right. 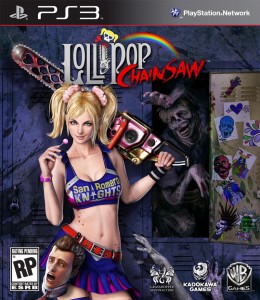