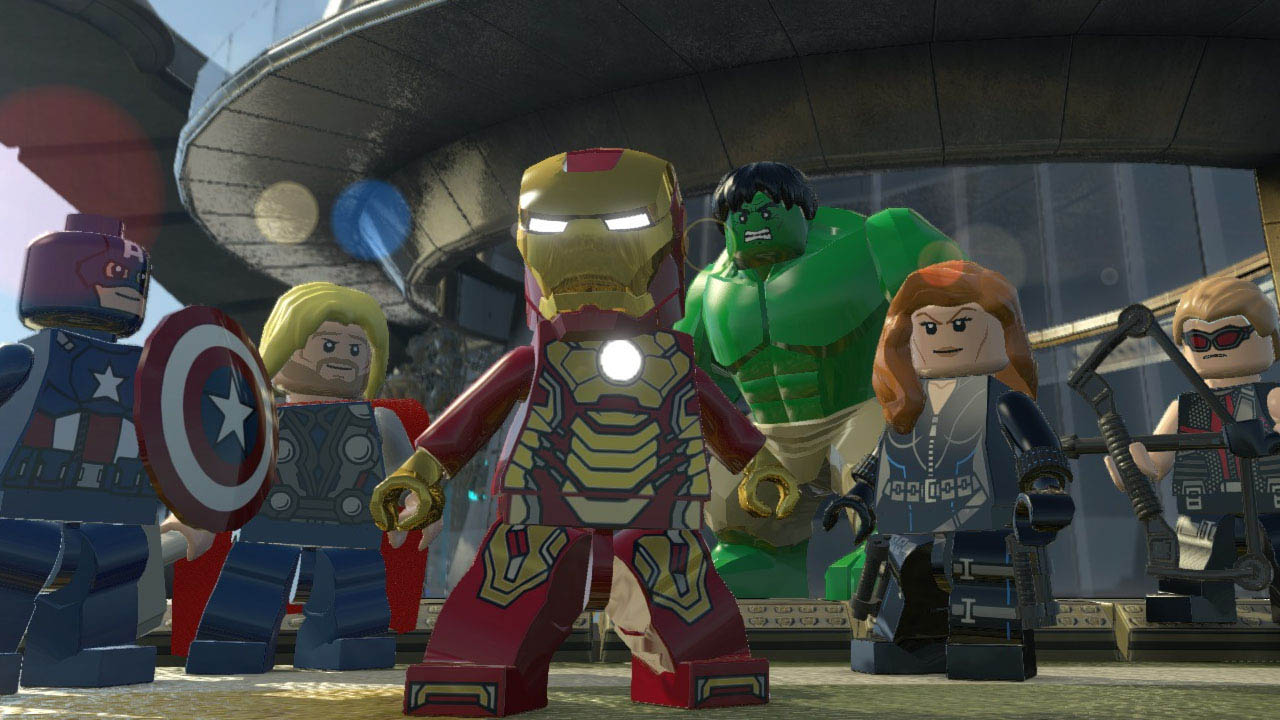 It’s the Marvel Cinematic Universe’s turn for the Lego treatment in the multi-movie mashup that is Lego Marvel’s Avengers.

TT Games have been fusing their unique Lego-inspired humour with pop-culture favourites for years now. Drawing heavily on the last few Marvel movies, Avengers invites us back into the TT’s Lego Marvel Universe.

Fans of 2013’s superb Lego Marvel Superheroes game are going to be right at home with this game, as it reuses many of the same gameplay interpretations of the Marvel Universe. 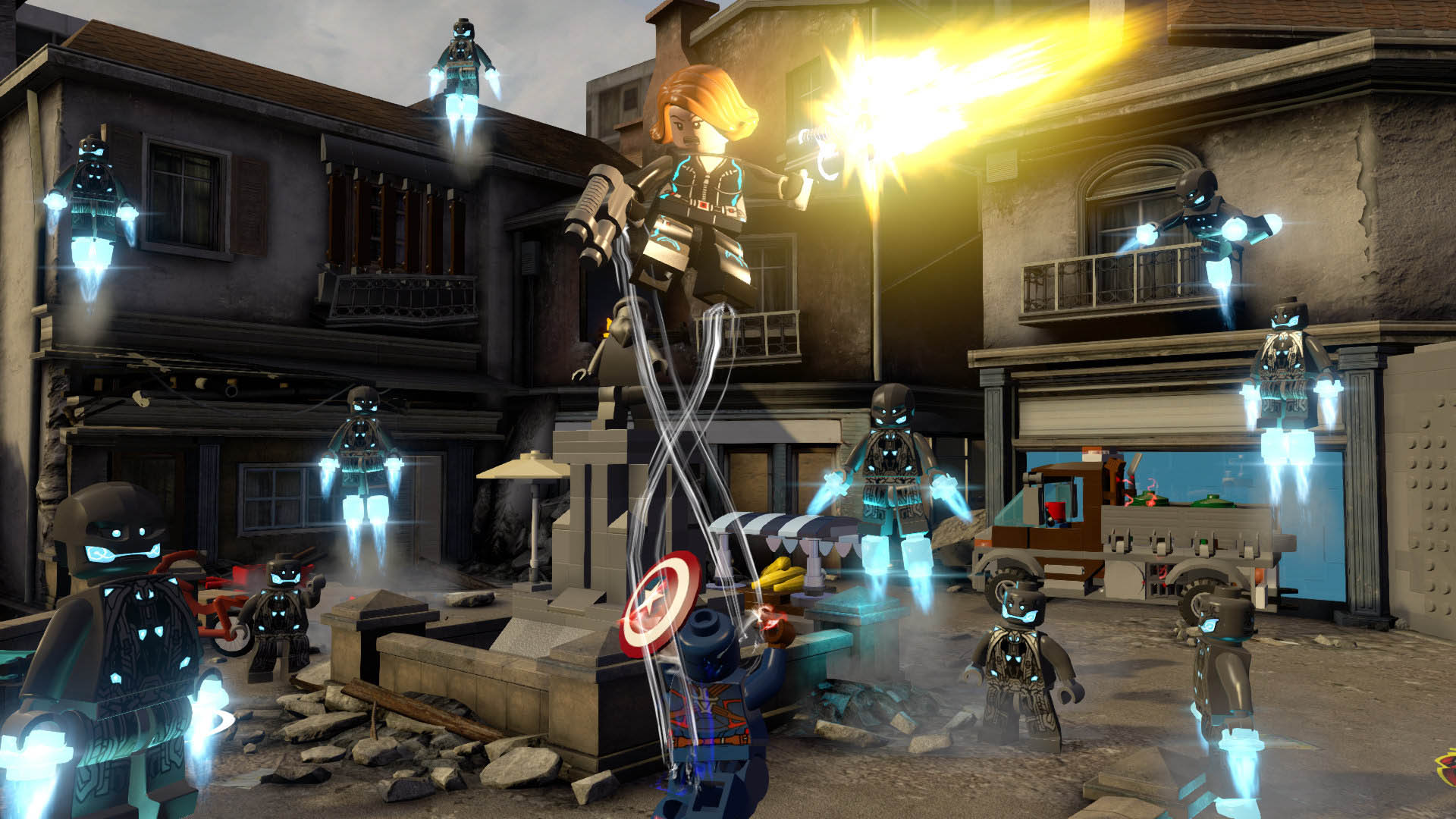 The main roster of heroes is a bit truncated compared to Marvel Superheroes due to the movies’ licencing agreements. But, the movie characters are all voiced using the original actor’s dialogue culled from movie soundtracks.

The game does, however, feature unlockable characters from Marvel’s back catalogue that have not yet made an appearance on the silver screen. Subsequent free plays of the game’s levels to be played using characters as diverse as Beta-Ray Bill and the original Human Torch.

Anyone that’s played a Lego game before is going to immediately recognise the gameplay. Taking a roster of heroes and characters from the movies and instilling each with special abilities, each has a specific role to play solving puzzles though out the game. 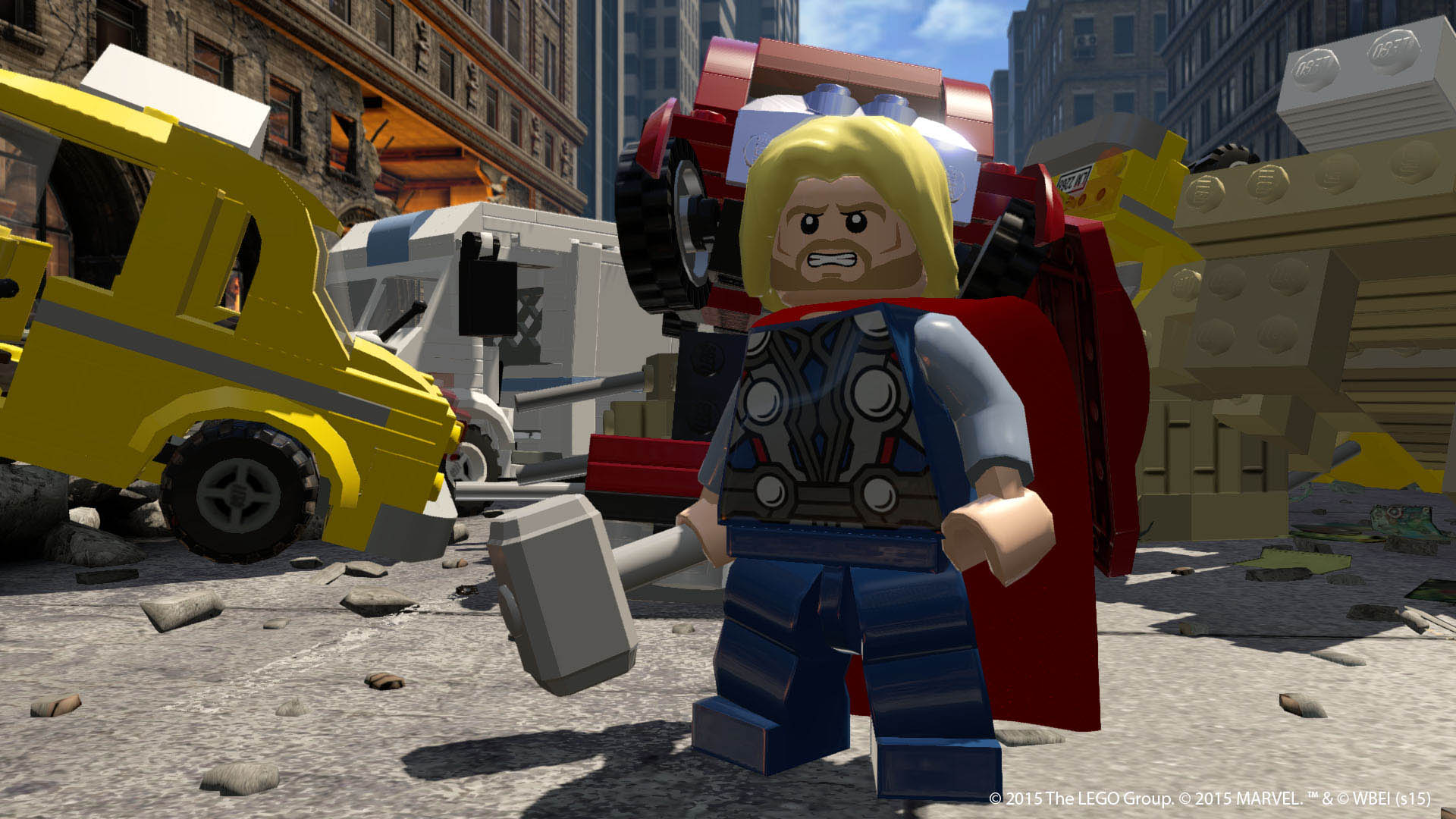 Smashing up the scenery releases Lego tokens and can also reveal Lego pieces that be used to construct useful objects unlocking collectables or helping to progress though the level.

Combat plays a big part of the game with the Avengers team often holding back an endless stream of bad guys whilst puzzles are solved.

Both The Avengers and Avengers: Age of Ultron have been spliced together in Lego form, with the most pertinent scenes in the first Captain America movie integrated as a flashback. The Dark World, Iron Man 3 and The Winter Soldier are all accessible from the hub after completion of the first Avengers movie. Players can also carry out side missions across the huge areas of Manhattan, Washington and Asgard, as well as the SHIELD helicarrier and the SHIELD HQ. 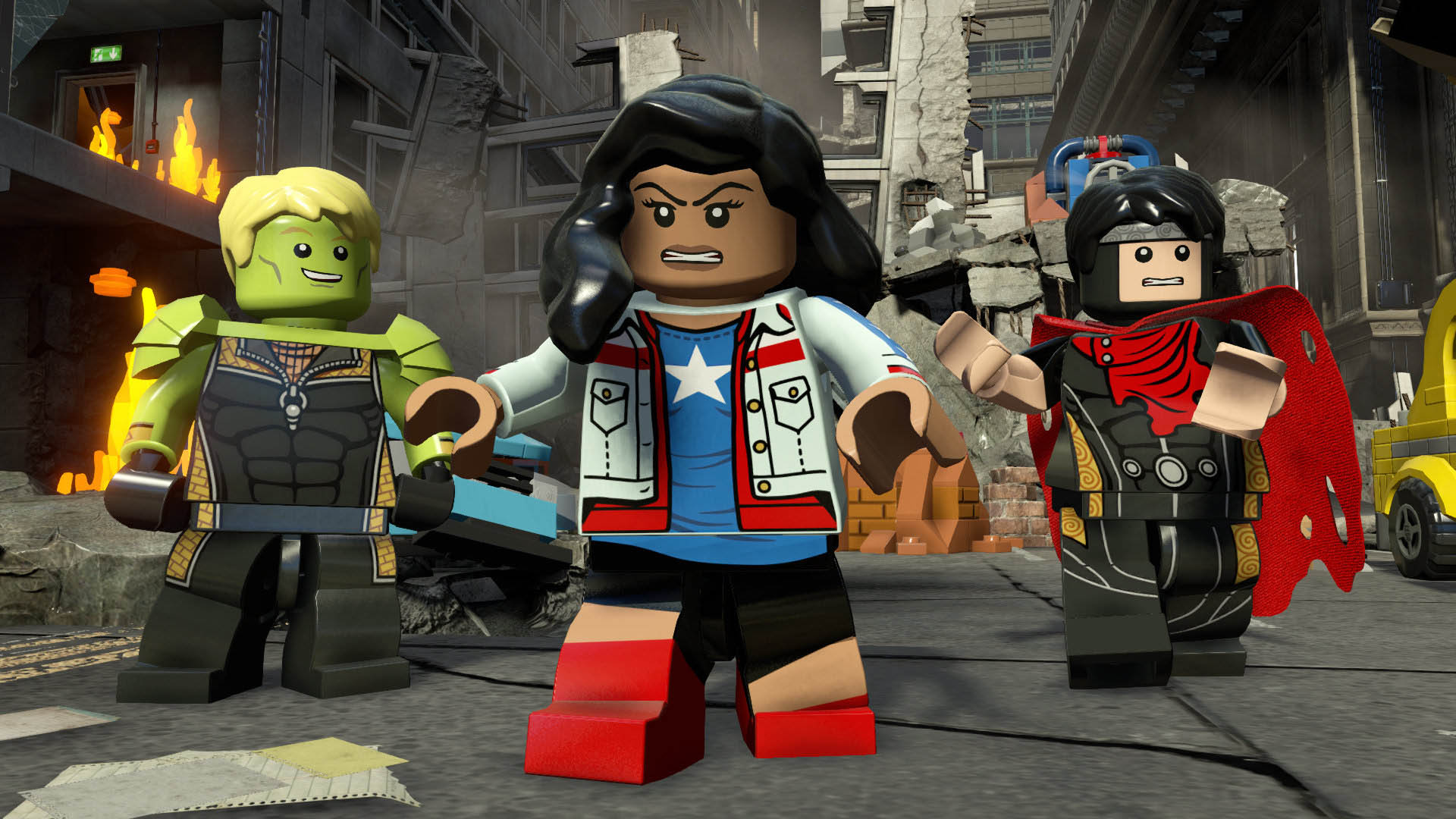 Lego games are designed to be played though more than once with some areas unavailable until certain characters, with specific traits, are unlocked. At least two characters are available at any one time and solo players will need to switch between each of them in order to progress. Co-op play via split-screen puts each player in control of a character and is probably the best way to play the game.

Like many of the Lego games, the game suffers from the occasional frustrating sequence which seems to defy all logic. But compared to the early Lego games the puzzles in this one are pretty well designed.

Also, whilst the cinematic soundtrack is welcome, but the volume changes between the game sound and that of the movies is jarring. The dialogue often sounds like a whisper compared to the sound effects and music. 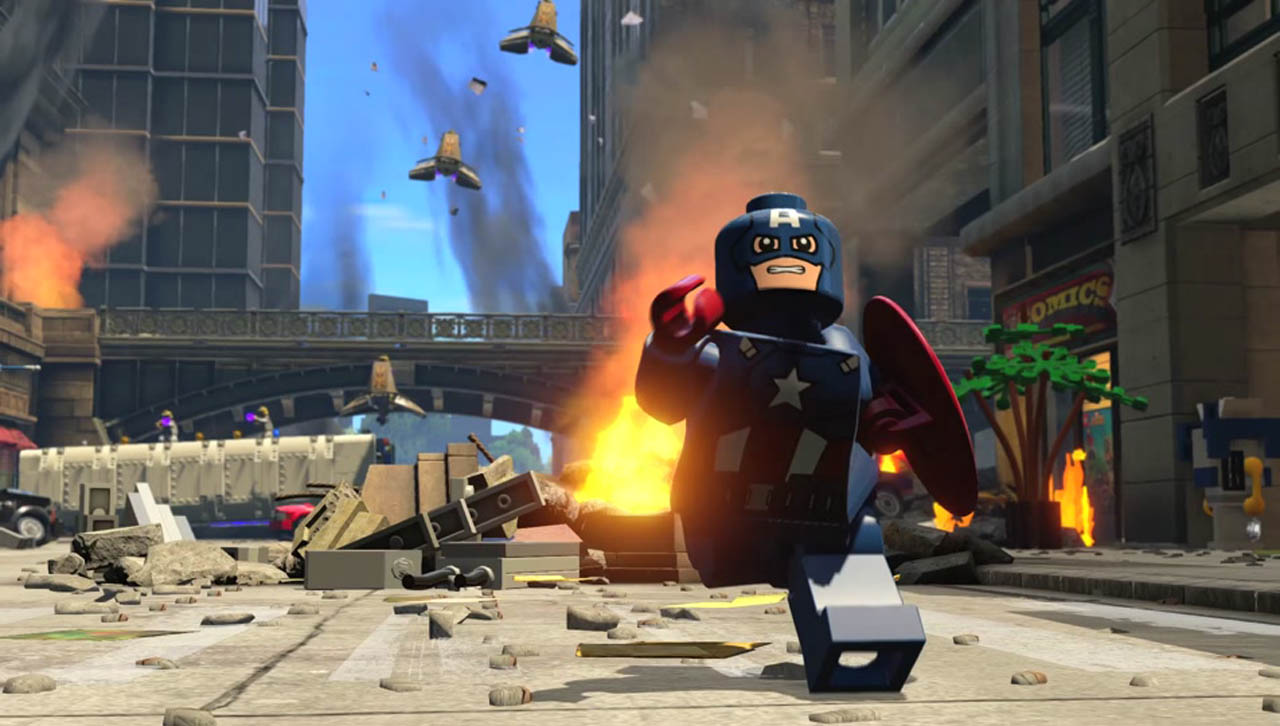 And, of course, the graphics are perfect. New-gen hardware is fully capable of rendering photoreal Lego pieces. The characters are perfectly designed, using similar models and animation effect as their counterparts in Lego Marvel Superheroes. The whole package has all the production values of a Lego cartoon movie version of the Marvel movies.

TT Games have continued to refine their Lego games with Lego Marvel Avengers. Slightly more constrained than their Lego Marvel Superheroes, due to the movie licence, but with the same humour and fun gameplay. A great way to revisit the Marvel films. Lego Avengers is a game that anyone can enjoy, but particularly recommended to fans of Marvel characters and TT’s other Lego games.