Few games out there manage to get sandbox right as well as Just Cause 3. The game hands you a variety of awesome weapons, gadgets, vehicles and explosives, puts you in a living breathing world and lets you loose. What you do from there is really up to you.

There is a story in Just Cause 3, it just isn’t a particularly good one. You play as suave dictator removal specialist Rico Rodriguez, on a mission to free his homeland from the tyrant General Di Ravello.

While the story itself is somewhat forgettable it does contain some entertaining over-the-top action sequences that fortunately does not take itself too seriously. You will find yourself doing everything from riding a missile to kissing a cow. The characters you encounter are entertaining without being too ridiculous, frequently adding a bit of humour to the situation. 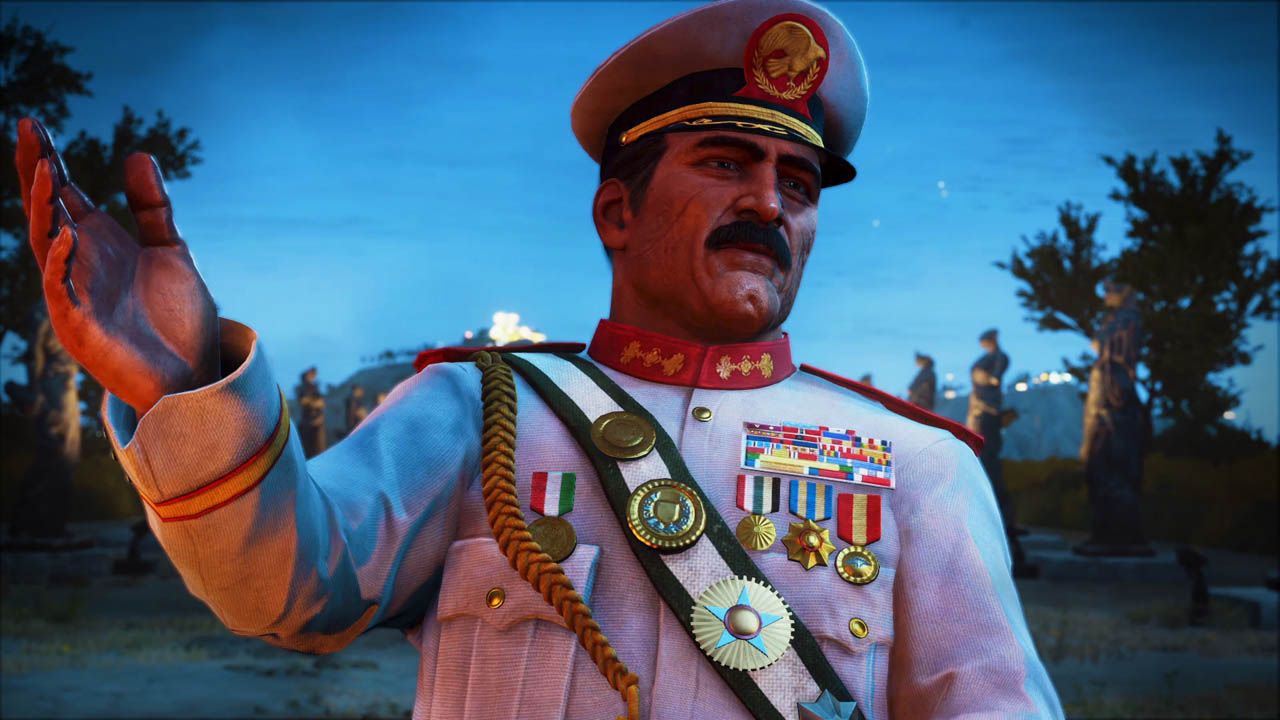 What makes Just Cause 3 stand out is some superb gameplay mechanics that encourages creativity from the player. The mechanics feel like a mix between the action of James Bond, the web slinging of Spiderman, Superman’s flying and Batman’s cool gadgets. Despite having a fairly decent selection of weapons and shooting mechanics, I found myself resorting to non-lethal means where I could.

The most game defining mechanic comes via way of the grappling hook which has three basic usages. First, it allows you to hook onto anything in the world, be it the environment, a person or a vehicle and pull yourself towards it. Second, it allows you to hang off or underneath of something while still allowing you to fire bullets. Lastly, it allows you to tether objects together and pull them towards each other.

There are a great selection of land, air and sea vehicles in Just Cause 3 to get around in. The actual driving mechanics aren’t great, feeling a bit awkward at times. 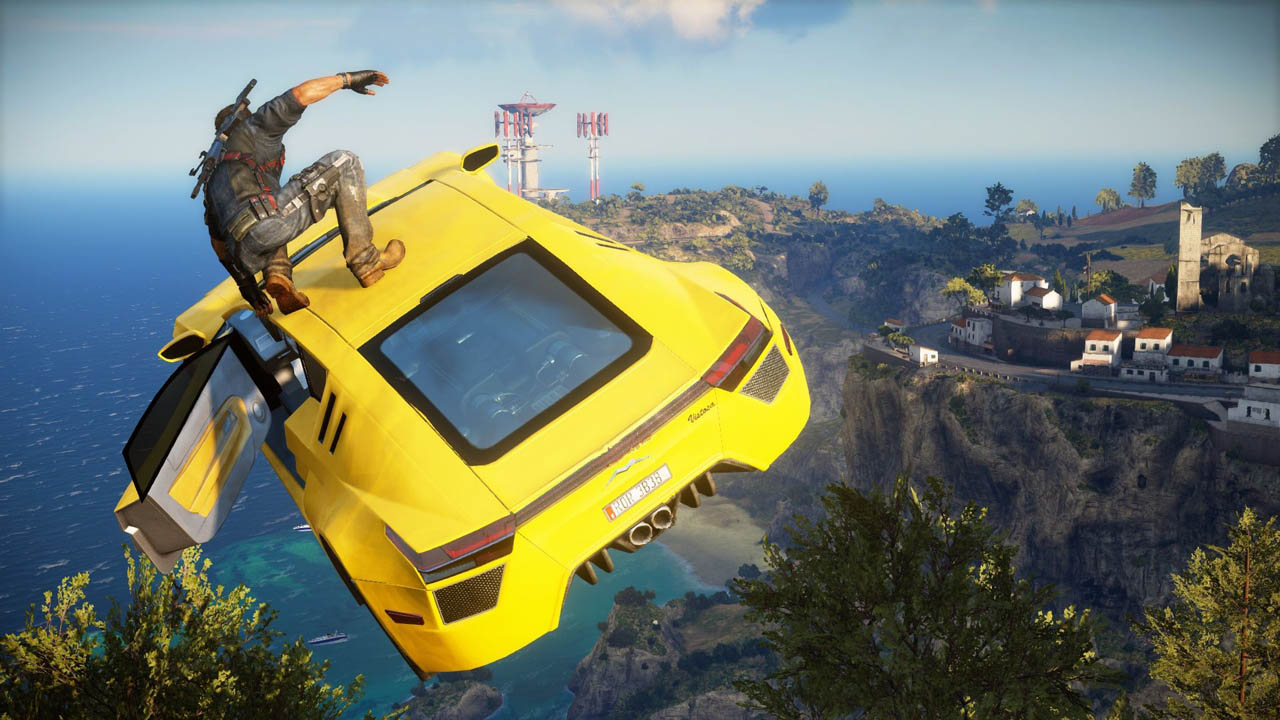 In order to get around, I found myself taking to the skies more often than not. Not through helicopters and planes as you may expect though. Rico has at his disposal a wingsuit and a parachute, which prove to be both a fun and practical combination. Using the grappling hook to pull yourself along every now and again, you are able to stay in the air with both these gadgets indefinitely.

Just Cause 3 boasts some pretty impressive physics. The most telltale example of this is blowing up a bridge which reacts to how and where you destroy it. While it doesn’t always work perfectly, being able to pull apart a few aspects of the world such as towers does open up various gameplay opportunities.

One area where the game shines is in its character upgrade system or more specifically the gadget modification system. By completing challenges, something I will get into a bit later, you unlock various mods for your gear. The mods are surprisingly useful and fun to use. Some of my highlights include the rocket propulsion system for your unlimited supply of explosives, a jump button for rebel dropped vehicles and a homing grenade. 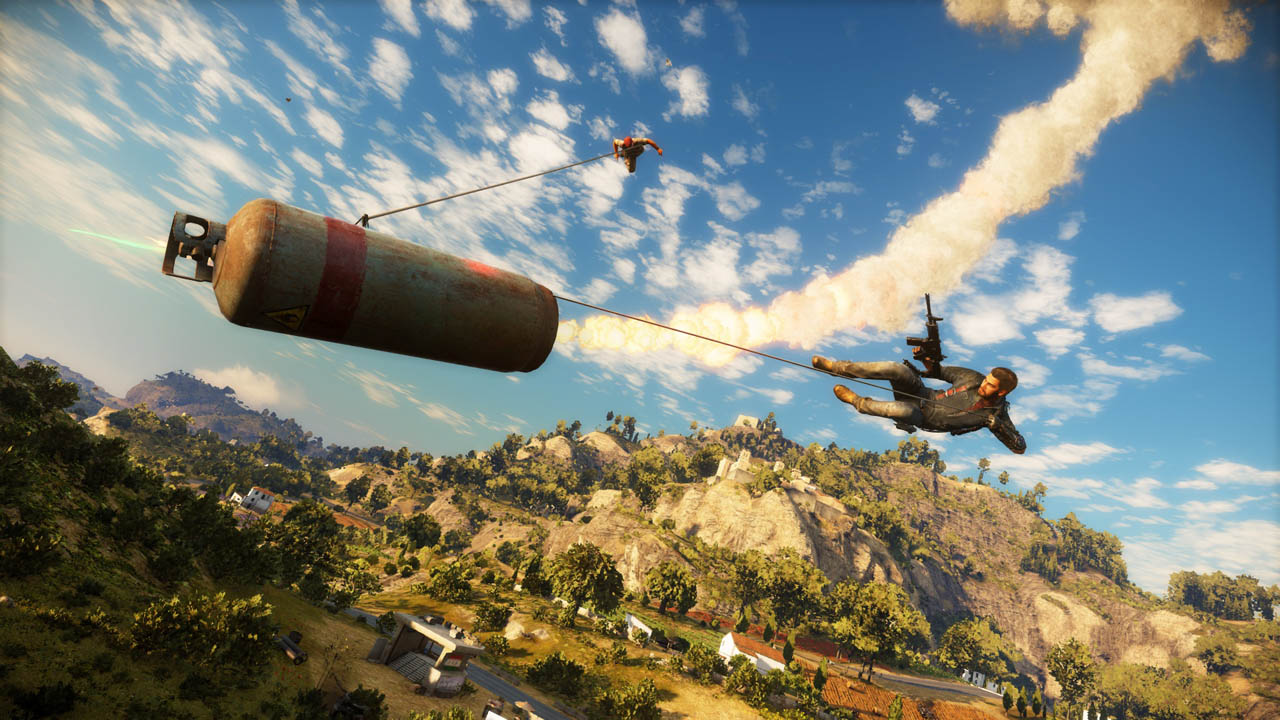 Just Cause 3 is at its best when you are encouraged to be creative in use of the various gameplay mechanics. While the previously mentioned storyline leaves much to be desired, the actual missions themselves do encourage creativity in how you approach it. They throw you into a situation, give you an object and leave how you go about doing it up to you. Do you hijack a plane, boat or tank from the enemy, do you use your grappling hook to collide the enemy into each other, do you place explosives on various targets or do you go in there guns blazing?

Outside of the main story, the only two major objective based things to do is to liberate towns and outposts and complete challenges. Liberations primarily involve going to the location and destroying a certain set of infrastructure. While this initially proves entertaining, the sheer number of them and how similar each of them are quickly makes it become monotonous.

Challenges involve completing set objectives with the most points you can. These commonly take the form of completing an obstacle course in a vehicle, wingsuit, boat or plane. Completing challenges progresses you to unlocking a new mod for your gear based on your performance. The challenges do become very repetitive however this is outweighed by the reward of a shiny new mod to play around with. 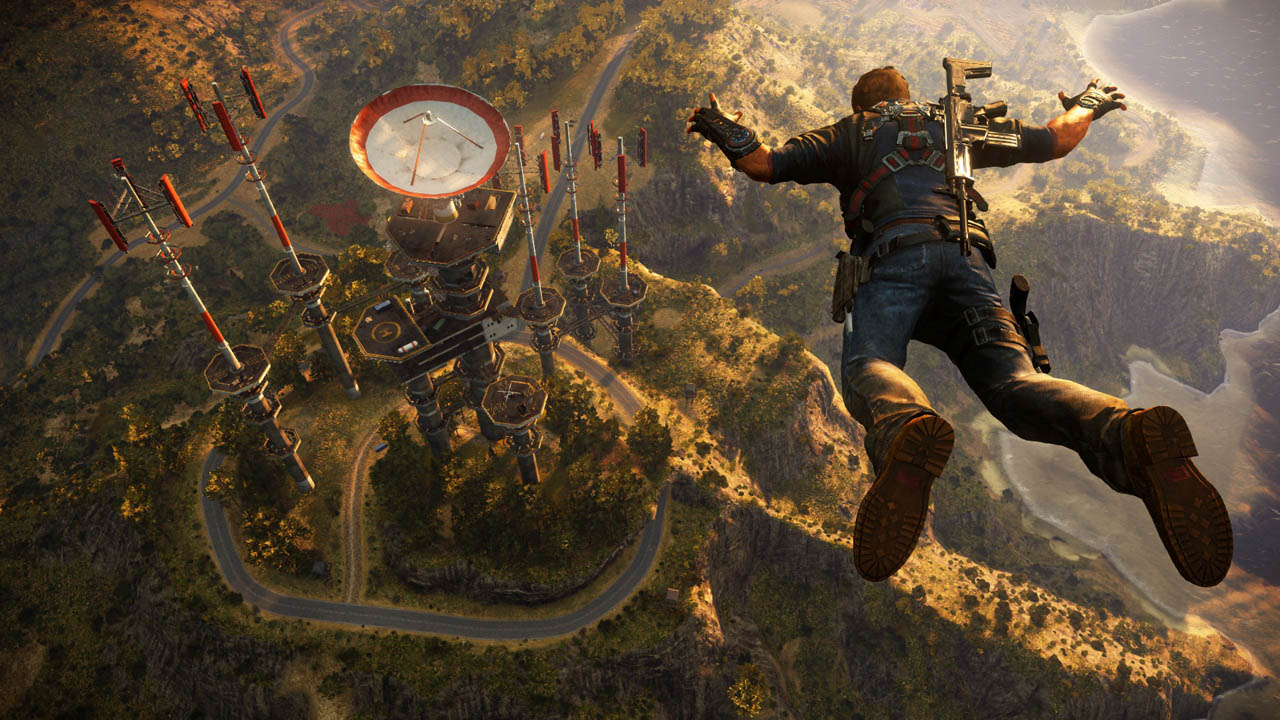 While lacking in variety of set objective based things to do, the game is actually a lot of fun when you come up with your own things to do. Whether it is blowing up a bridge, going on a rampage or flinging civilians into the distance, it is easy to sink countless hours into coming up with something you want to do then just doing it.

The game performed near flawlessly and looked great on the beefed up PC I was playing on. There have been numerous reports however of performance issues on consoles and PCs. When you consider all the explosions, bullets, physics and vast open world, it is easy to understand why.

Just Cause 3 is a great sandbox game that performs best when it encourages creativity. Although it falls short in structured things like storyline and challenges, it stands out when it comes to letting you do whatever it is you want to do.