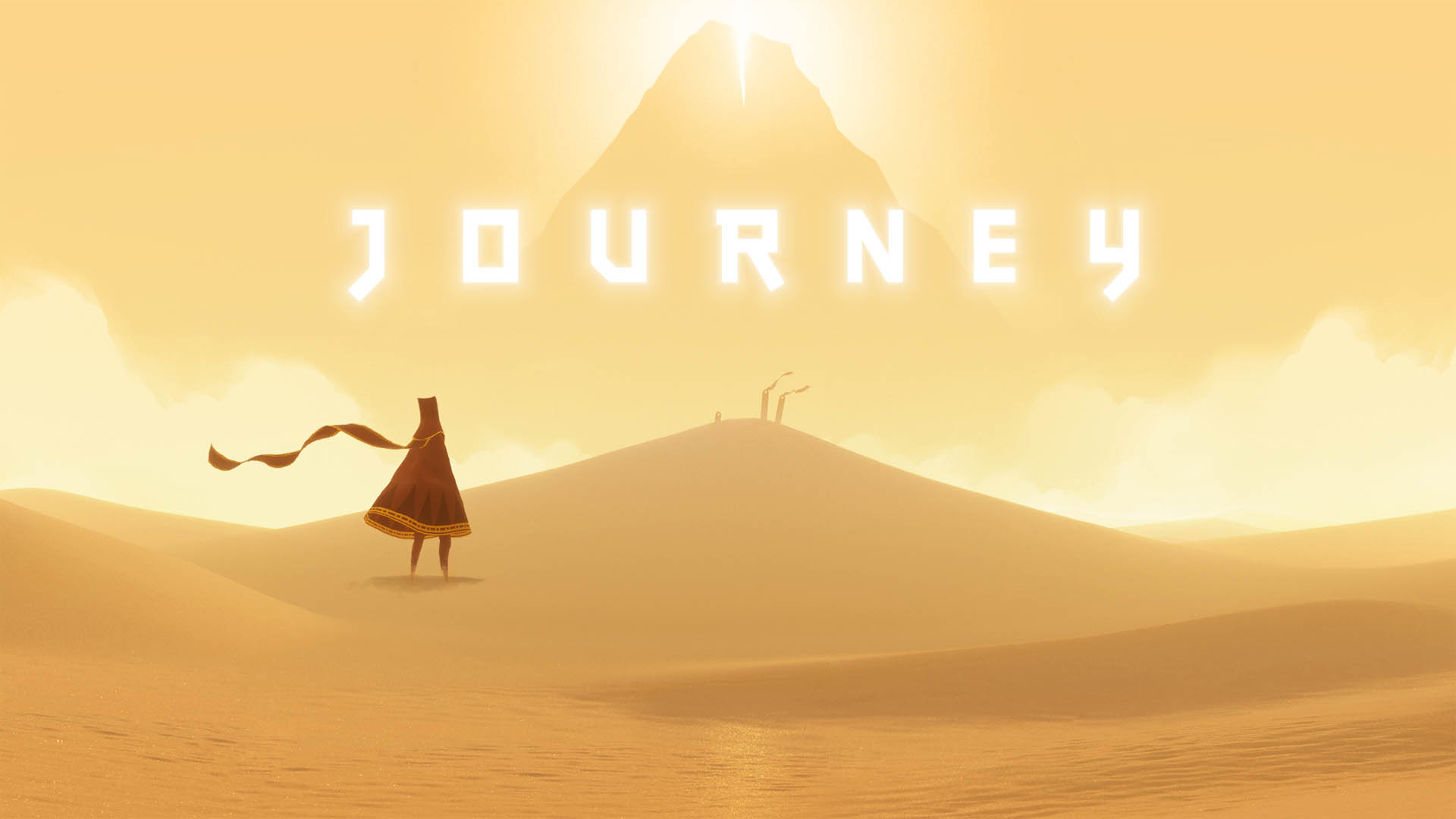 Back in high school I remember studying a concept about how it is the journey, not the destination that matters. This concept very much embodies Journey, a game originally released back in 2012 for PS3 that has now made its way over to PS4.

Journey doesn’t feature a story in the traditional sense. There is no spoken dialogue and nothing there to really explain to you what is going on. Instead you are left trying to piece together fragments of the story from the various things you encounter and events that happen. The ambiguity in the story as well as how it is told gives the game a unique and engaging tone. 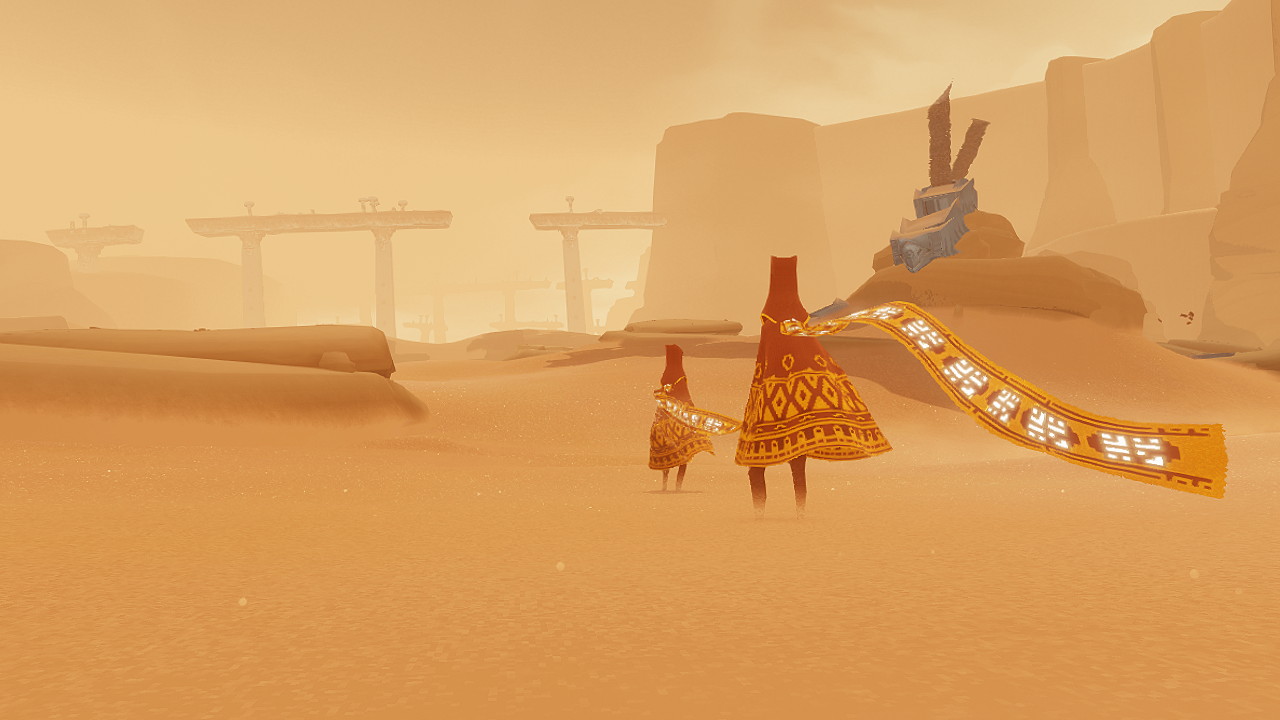 After a short cutscene that gives away very little, you begin your journey as a mysterious robed creature in a very vast and sparse desert. With no understanding of what is going on, you soon discover a strange mystical mountain in the distance. Guided by curiosity of everything around you, you set out on what is to be a journey to remember.

The game evokes a sense of helplessness and struggle along your journey by placing you in large and somewhat hostile environments with no way to defend yourself. On the few occasions that you do encounter an enemy, all you can do is hide.

To get through Journey, you must get by with a combination of jumping, climbing and emitting a strange bubble by singing which interacts with the environments. 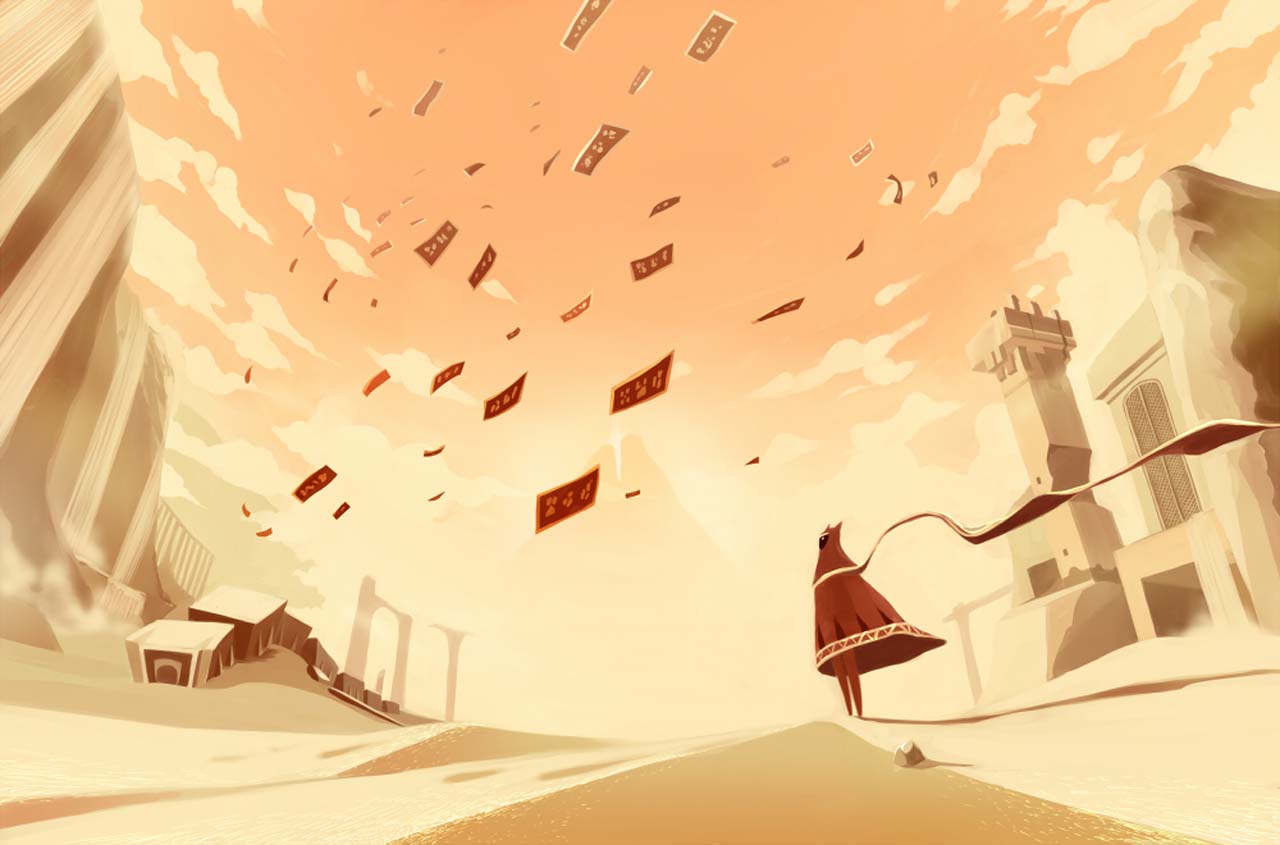 Trailing behind your character is a long scarf that grows as you collect mysterious collectables located throughout the world. Glyphs on the scarf acts as a bar that measures how much you can jump or fly, the longer the scarf, the more you can jump and the higher you can go.

Helping you along your journey is some strange cloth-like things. These creatures, for a lack of a better word, assist you by helping you reach new areas and restoring the glyphs on your scarf. Many of these creatures are required to be freed first by singing near them. 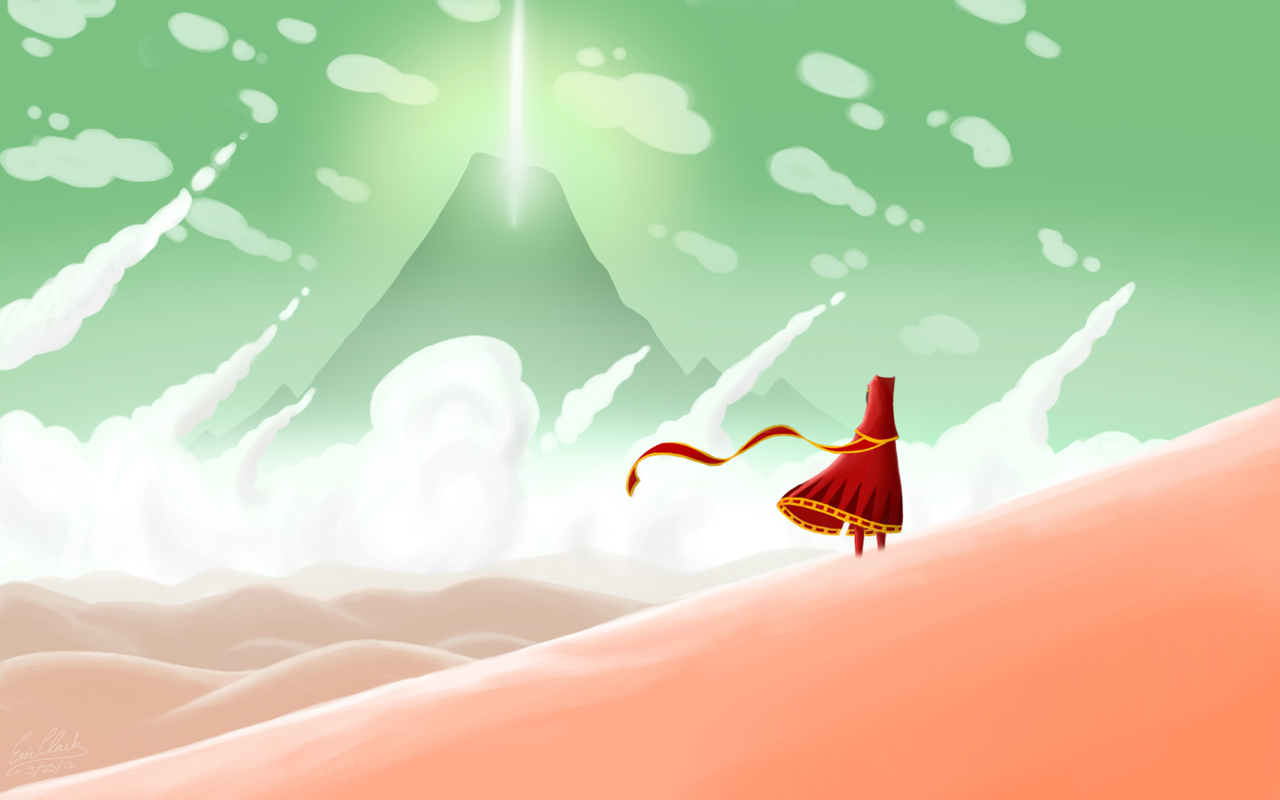 Along your quest, you will encounter other players randomly entering your world.

The names of those players don’t pop up above them making them feel like they are just a part of your world. While being able to play through the game with others may appeal to some, having someone moving through the game at a different pace then you, especially when they are not too far ahead, became irritating at times.

Progressing through the game revolves more around exploring and doing rather than thinking. Getting to the next area was generally a matter of finding and interacting with certain objects or just generally following the path. 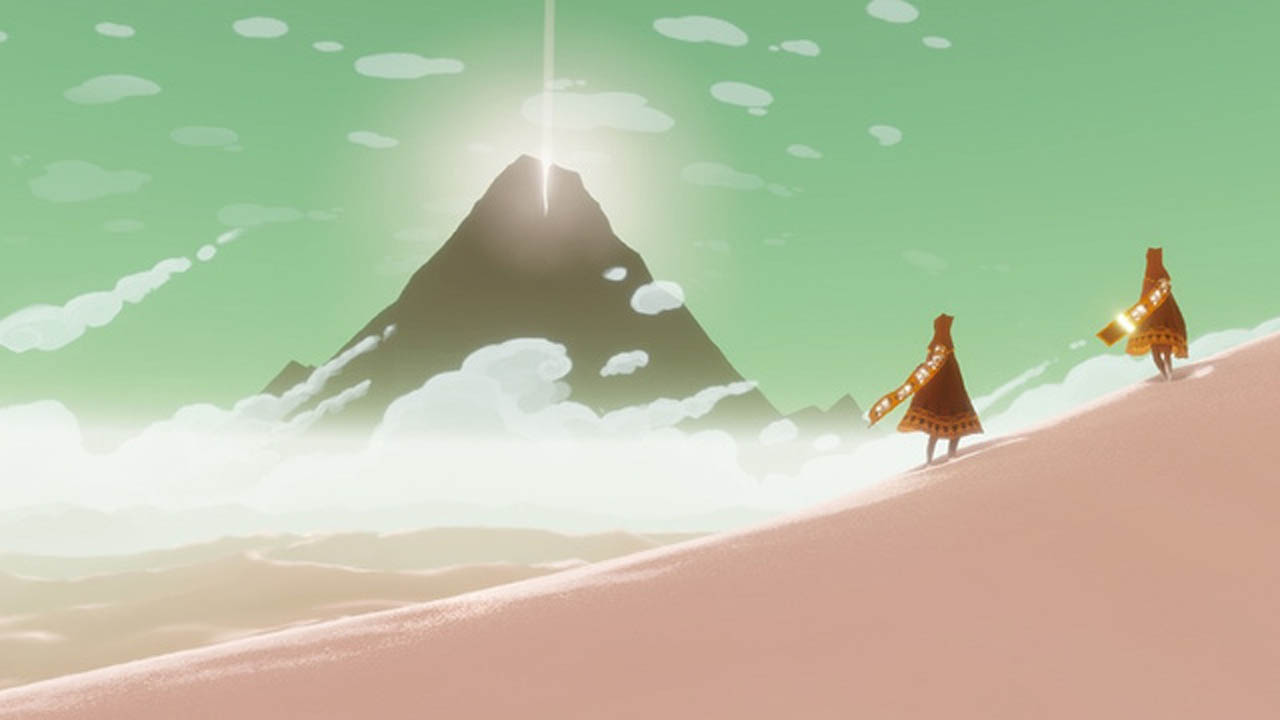 A small issue I had with the game was that it was short.

Doing a medium amount of exploring, I was able to push through the game in 2 hours. While being able to play through the game in one sitting actually makes the game more engaging, I feel that adding another hour onto it would have only added to the experience by making the journey feel more epic.

Once finishing the game, you are able to jump straight back in and play again. 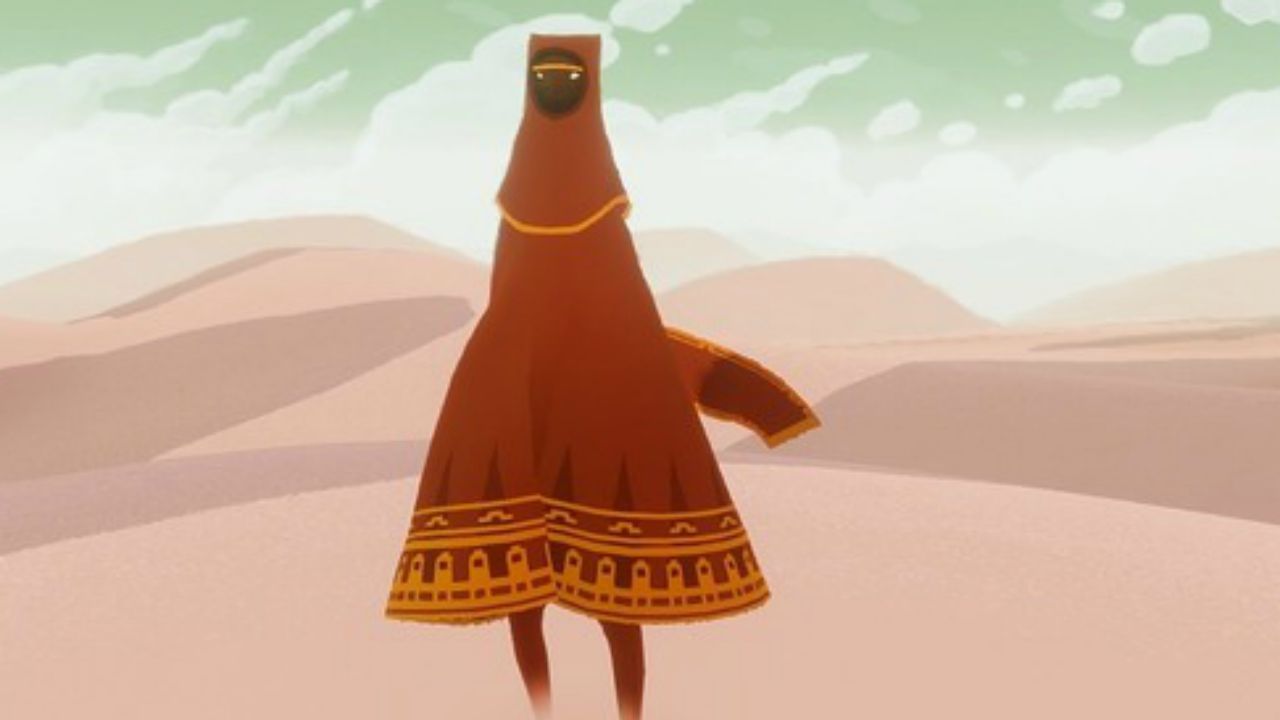 While I am certain that many people would want to do so, I personally felt no urge to jump back in. While I began a second game, I found the sense of mystery that was with me throughout my first playthrough was gone. Feeling as though playing through again would taint my overall experience with the game, I opted to not finish it a second time.

The game looks gorgeous due to the cartoony art direction that it superbly executes. The music in Journey is also done excellently, helping to build the atmosphere and provoke emotion.

Though only brief, Journey is truly a memorable game that feels as much like art as entertainment. It focuses on providing an engaging experience that will keep you hooked throughout its short 2 hour duration.