Injustice: Gods Among Us – Review 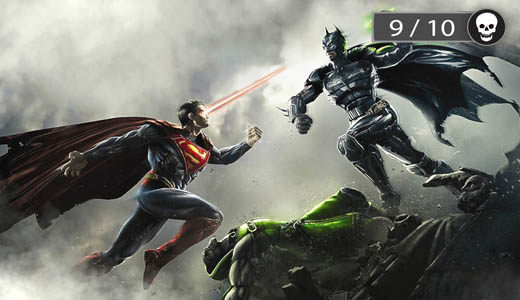 Injustice: Gods Among Us is brought to us from Mortal Kombat developer NetherRealm Studios. The game continues the beat ‘em up developer’s relationship with comic book powerhouse DC Comics first kindled with the 2011 Apple iOS game, Batman: Arkham City Lockdown.

I don’t know what it is about superheroes and their need to not only beat the crap out of super-villains, but also their fellow heroes. Since the beginning DC’s superheroes have maintained uneasy alliances with their peers. 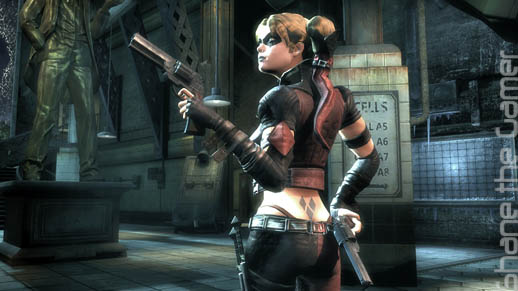 Their fragile relationships often degrade into super-scraps of epic proportions. The result too often being superhero shaped holes in masonry, impact craters in the middle of streets and a city littered with the crumpled carcasses of thrown inanimate objects.

These super-powered scuffles usually end with the misunderstanding explained and a hand-shake. Talk about anger management issues; but what do you expect when the only shrink in town is one Dr Harley Quinn! 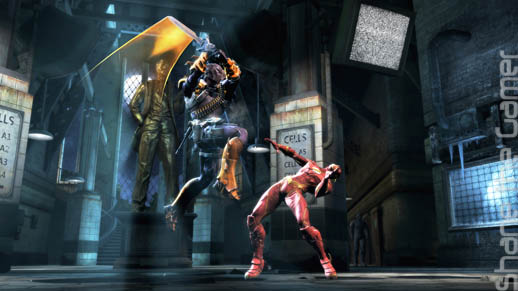 The idea of pitting DC Comics heroes and villains against one another in a fighter is pretty much a no-brainer and one that should have been done years ago. With Injustice, not only have the scribes at DC Comics written a cracking original comic book story, they’ve also come up with a superb reason why all the heroes have to fight each other (and their respective nemesis).

I’ve never really thought about why Mitsurugi, Yosimitsu, Ken or Raiden would be fighting their identical twins; that’s just something that happens in fighting games. But believability isn’t really the genre’s strong suit, that’s why we have burly cowboys squaring up to fight schoolgirls (I’m looking at you, DOA). 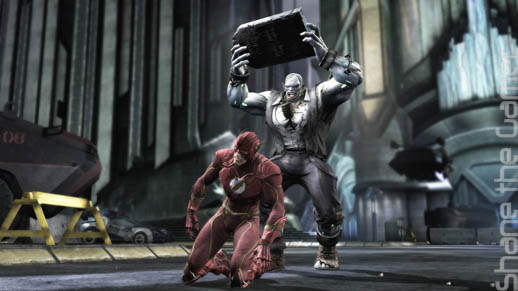 But that sort of suspension of disbelief isn’t required with Injustice. In the DC multiverse there resides a number of alternative Earths. So many in fact that every once in a while it all gets out of hand, necessitating a culling and an inevitable a crisis of one sort or another.  It is from this concept of a DC multiverse that the game’s story mode draws its inspiration.

On an Earth that’s likely not our own, or not the Earth on which our version of the DC heroes exists, The Joker has finally gone one step too far. In tricking Superman into killing Lois Lane and his unborn baby and then following it up with the nuclear Annihilation of Metropolis, the Man of Steel, being rightly upset, violently dispatches The Clown Prince of Crime in front of a protesting Batman. 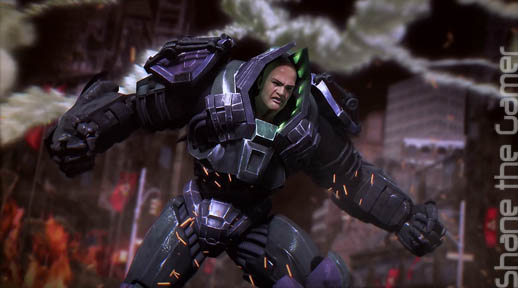 This action sets in motion series of events whereby an aggrieved Superman takes control of the world in order to save it from itself. The other superheroes are offered the choice to join Superman and his new world order, or die. Only the Batman and his insurgency stand against him.

Meanwhile, on an alternative Earth, the Justice League manages to foil the Joker’s plot. In a bid to defeat Superman, the insurgent Batman transports the victorious League members over to his alternative Earth. 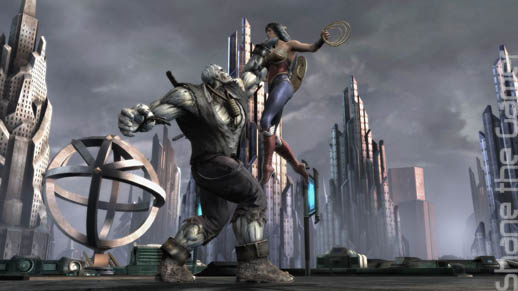 The confused Justice League are scattered about the familiar, but different, city of Metropolis and it’s not long before they are confronted with darker alternative versions of themselves that have aligned with the tyrannical Superman.

And so, as you’d imagine, the battle begins.

Injustice ships with a heady amount of iconic DC Comics heroes and villains. You’ll find all your favourites in there plus a few more. The character models are superbly rendered to give them more of a real-world look, similar to the grounded style of Alex Ross’s art in Kingdom Come and the Justice League albums. The CGI intro and cut scenes are absolutely amazing and will have any comic-book fan wriggling with excitement. 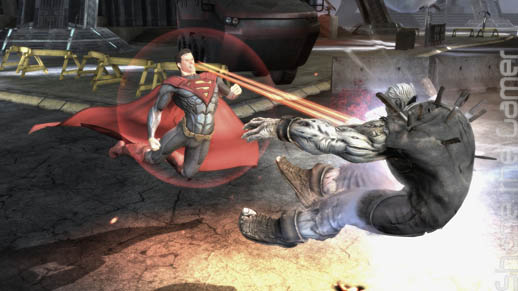 The story mode is divided up into chapters, each one with players taking control of a different character. You start as Batman, though Green Lantern, Aquaman, etc. You even play as an armoured Lex Luther and the Joker (who also got teleported over to the alternative version of Earth).

At its heart the game is essentially a traditional 2D fighting game, but with the characters and arenas rendered in 3D. This allows some fairly unique interactions as the fighters pummel their opponents into the background and use objects in the environment as weapons. The result is rather fresh take on what I would otherwise say is a tired genre. 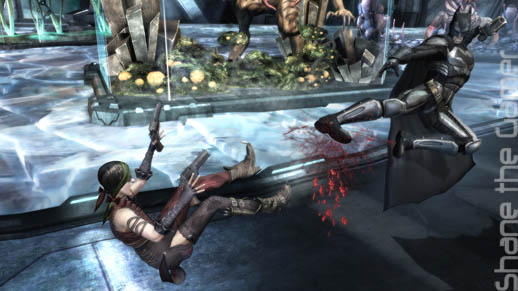 Each character can carry out a light, medium or heavy attack, plus a special character specific attack using one of the four buttons on the gamepad. The left analogue aims the attacks high, mid and low, as you’d expect, and controls the jumps for aerial attacks. Blocking is also carried out using the left analogue stick by pushing the stick away from the attack, which took a bit of getting used to.

Battles are one round in length, but each character effectively has two health bars. This serves to keep the action going without the customary end of round pause. 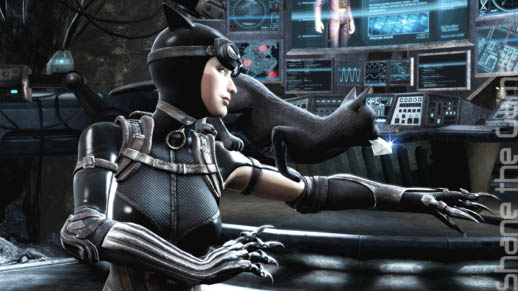 As combat progresses a power meter fills. Once full up the fighter can unleash a signature super move attack on their opponent. These are great fun, incredibly over-the-top and awesome to watch.

The contents of the power meter can also be wagered using the clash system. These special battles can only be called into play when the first health bar is used up. Both fighters wager a certain amount of their power meter, as they run headlong into one another, with the highest winning the bout and receiving a health boost. 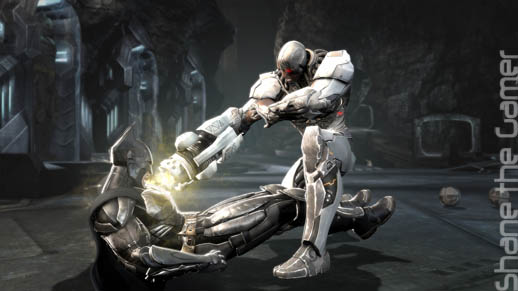 The fights are set in destructible arenas based on famous locales in the DC Comics universe. There’s Wayne Manor, Superman’s Fortress of Solitude (look out for the shrunken city of Kandor), the Justice League’s orbital Watchtower (with the battle being overseen by J’onn J’onzz) among others. Not only can the environments get trashed during fights, but also a well-placed hit can actually smash opponents right through the wall and into another area of the arena, similar to the Dead or Alive games. 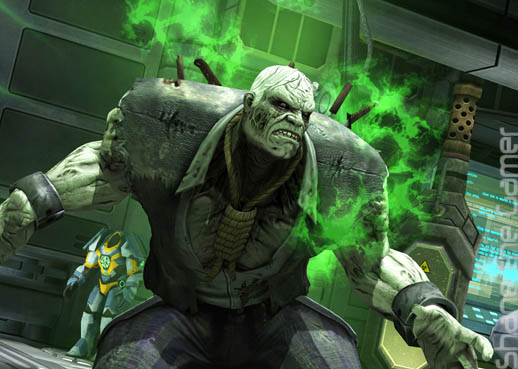 As a preamble to some of the confrontations you get to play some mini-games. They are no more than distraction, really, but success yields an advantage during the actual bout. For instance playing as Joker, before a fight against Nightwing, I had to quickly throw playing cards at the grown-up Boy Wonder by pressing the corresponding buttons as he ran towards me. 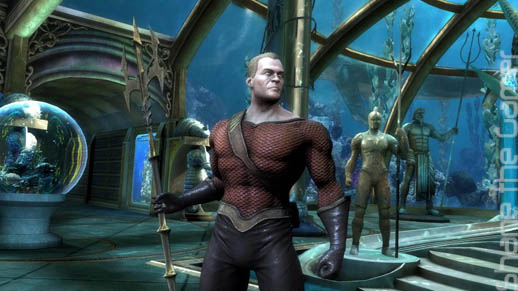 As well as the story mode, Injustice is packed full with distractions. Even though you could spend weeks just perfecting character moves, there are plenty of other things to do that make this one of the most feature-rich fighters that I’ve seen in a while.

Every fight, no matter what mode that you play in the game, earns XP. When the XP meter fills you level up; which in turn unlocks items such as new character skins and tokens for redemption in the Archive. The Archive is found in the extras menu and contains unlockable artwork, 3D models and a host of other interesting goodies. There is also the option to customize your personal Injustice game card. 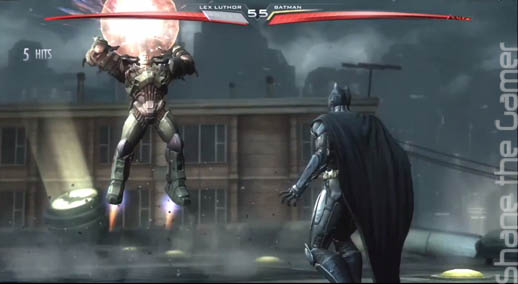 The more traditional arcade-style modes can be found under Battles in the single player menu. The Classic option gives you the usual ten fighter tournament with an ending scene for each character. There are also some other playlists which allow players to go up against just heroes or villains, as well as an assortment of other modified matches, many of which need to be unlocked.

The S.T.A.R. Labs mode offers players a variety of fighting challenges and mini-games. Featuring fights with specific criteria and additional hazards such as falling masonry and modified opponents (such as fighting against a Batman equipped with Kryptonite batarangs). 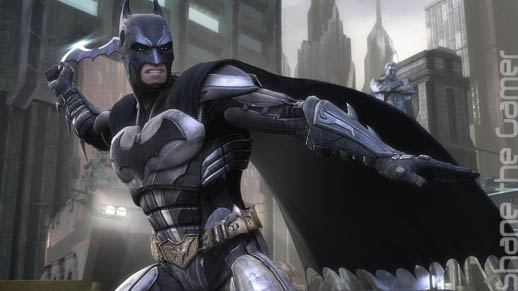 For the pros and those with a glutton for punishment there is the ever-humbling multiplayer mode. In the interest of writing a complete review, I prematurely waded into a multiplayer match and proceeded to have my arse instantly handed to me. Those online guys are good. I recommend a fair amount of practise before venturing online. Of course you can still play the regular one-on-one verses mode, making Injustice the ideal after-pub winner-stays-on couch game with your mates.

On the whole I had a much better time with Injustice that I thought I’d have. Prior to playing the game I’d have said that 2D fighting games belong in the past; now I’m not so sure. But I did still have a few minor niggles. 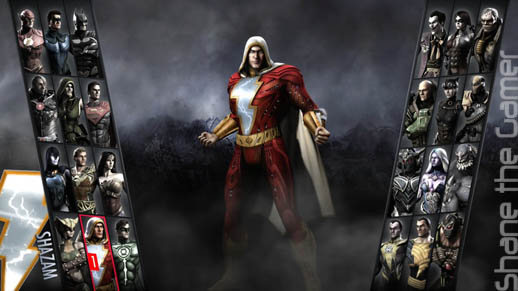 My trusty Xbox 360 arcade stick, which has stood me in good stead through many iterations of Tekken and Soul Edge, just didn’t seem to do it for Injustice. I’m not sure if it was the way the game mechanics gel or if I’ve just lost my edge when it comes to beat ‘em ups- my reactions not being as quick as they used to be. Also, no matter how hard I tired, I found it absolutely impossible to execute some of the combo moves.

Even using the training mode they just wouldn’t work for me. Again, it could be that I’m just getting on a bit and need a bit more time with the game. 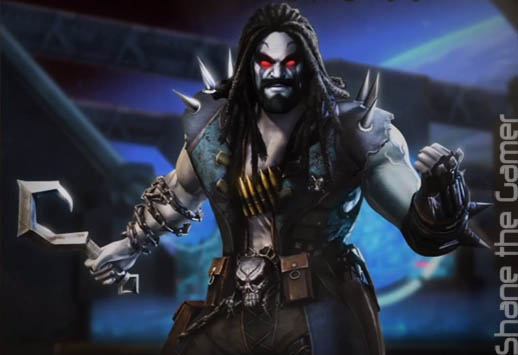 There are already some premium DLC packs available for Injustice offering up new skins and characters. At the moment you can download alternative skins based on Alan Moore and Brian Bolland’s The Killing Joke graphic novel, Mark Millar’s Soviet Superman tale Red Sun and a set from the Teen Titans.

There are four extra playable characters planned for release with Lobo and the Barbara Gordon version of Batgirl out now. Fans can also purchase a season pass which gets them four new characters for the price of three. The extra skins are, curiously, not included in the season pass. 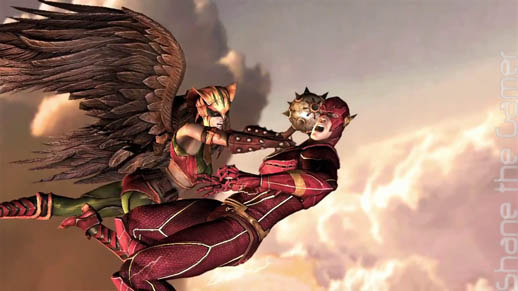 Despite my reservations, and general apathy towards fighting games, I found Injustice a lot of fun to play. I can’t offer a technical opinion on the fighting mechanics, but I can say as a casual player that the game kept me coming back for more.

With its superb fighting action, and refreshingly logical (for a beat ‘em up) plot, Injustice is probably one of the best examples of the genre that I’ve played. The game has a massive amount of replay value. Not only are there many different modes to play, but to truly master the game is going to take some serious dedication, especially if you seriously want to compete online. 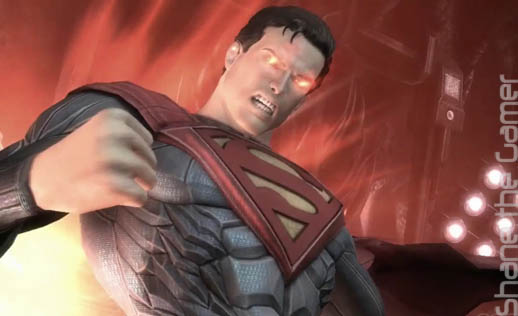 Injustice: Gods Among Us is not just a great fighting game, it’s also a great superheroes game, and thus easy to recommend to fans of both.