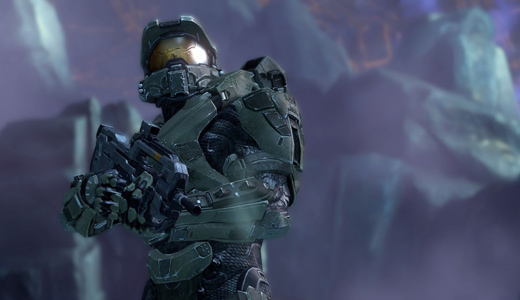 In the entire history of video gaming, I’d argue that never before has a gaming studio been under as much pressure to take as much care to both attention and details so as not to make a bad game.

After Bungie’s massive, genre-changing successes with Halo 1, 2, 3, ODST and Reach, 343 Industries found themselves with the unenviable task of having to put together a new trilogy of Halo games that would satisfy a franchise with, quite possibly, the largest and most vocal sea of fanboys in the world of video games.

Which begs two questions of Halo 4, the first in a new trilogy of the iconic series; is it a true Halo game? And how does it stack up to it’s predecessors?

Not only is this 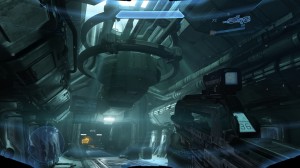 game true to the Halo universe you’ve come to know and love, it manages to somehow be a better outing in almost every sense than all the games that came before it.

Halo 4 begins four years after Halo 3 left off, with Master Chief coming out of cyro-sleep in a half destroyed UNSC ship in the middle of space.

Chief gets awoken from his peaceful slumber by his faithful AI companion Cortana, who alerts him to the presence of a Covenant raiding party. In the blink of an eye, the action is back on and Chief has to start shooting the bad guys.

If this sounds a little bit like the opening of the original Halo, that’s because it is. Whether or not this is an intentional tribute to the game’s roots (which it certainly seems to be) becomes pretty unimportant fairly quickly, as things take a pretty sudden turn for the worst with the introduction of a new threat that Master Chief and the Covenant are forced to deal with: the Prometheans, a race of ancient digital guardians, created by the Forerunners (see the original Halo trilogy). 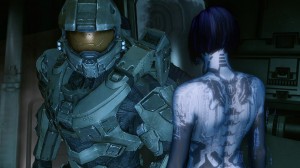 What separates Halo 4 from merely being a piece of Sci-Fi action tied together with a story about a historical war, is the emotional story running along beneath the surface.

Early on, it becomes clear that Cortana is experiencing rampancy – a condition where AIs begin to literally think themselves to death. There’s a remote chance that if her and the Chief can get back to Earth in time, they may be able to save her. If that wasn’t enough to make Halo 4 the most superb example of story telling the series has ever seen, there’s also some profound questions posed about the nature of the Spartans (the type of super soldier the MC is) themselves, specifically the possibility that the only reason the Chief was successful in beating the Covenant is because he was mentally unstable.

Even the constant high stakes and loss of Reach can’t hold a candle to the plot of Halo 4, which is nothing short of a science-fiction masterpiece.

This story would be wasted without a compelling single player campaign with which to enjoy it, and Halo 4, unsurprisingly, comes to the party here in a big way. 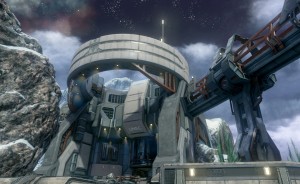 e same length as previous Halo games, and an almost as impressive range of environments, the real strength of the single player experience is how visually stunning and immersive it is – a noticeable step-up from Reach, especially when it comes to cutscenes featuring human faces.

Traveling around the universe fighting the mass collection of enemies Chief finds himself dealing with never gets old, and unique set pieces, new vehicles and a range of ways to tackle each situation mean that even the most jaded of Halo fans will find something new to surprise and delight you as you make your way back to Earth to try and save the day.

It’s not entirely perfect, mind you – some of the levels in the earlier part of the game manages to feel a little bit more ‘video game-y’ than Halo 3 and Reach, very based around indoor environments and location based objective. 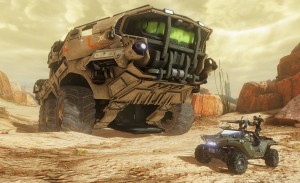 I’d have liked to seen more of an emphasis on outdoor levels and environments, personally – not that the indoor environments are weak in anyway, or that the outdoors are underrepresented – the outdoor segments are just so excellent, it’s a shame they didn’t get more screen time. Furthermore, it seems as though I spent far more time in vehicles than I ever have in a Halo game, which means less time of actual run-and-gunning, a classic Halo.

Luckily, you barely notice it, because the new vehicles are so excellent.

But let’s be honest, the majority of this games audience probably didn’t buy it to experience elegant reworking on existing genre tropes, superb environments and subtext. They’ll buy it for the kick-ass action.

Halo 4 delivers this in spades, but at a slightly different pace than you might expect.

With so many iterations of the Halo series to compare to, oddly enough it’s the original Halo that I find myself drawing the easiest comparison to, with the additional and subtle addition of the pacing and cover emphasis that you might recognize from the most recent Call of Duty’s. 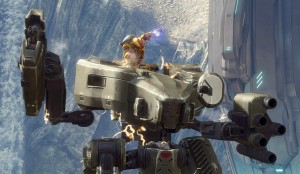 order to reflect the aging nature of the Master Chief, or that the majority of the campaign sees you fighting against overwhelming odds by yourself, Halo 4 makes you feel slightly less like an unbeatable killing machine and more like a soldier again, ducking around through cover and making the most of the resources you’re given access to.

Dual-wielding is once again not an option here, bringing the game back to the so-called golden triangle  – putting equal emphasis on guns, grenades and melee combat. I noticed that once in a while the sound of this action – explosions and the like – would overwhelm some fairly plot-sensitive information, which could be slightly annoying. But, pound for pound, action doesn’t come much better than Halo 4.

After a few games of no major new weapon additions (the last notable addition to the series armoury was the Spartan laser), Halo 4 brings an entire race worth of new weapons to the table, cleans up existing weapons and does away with some of the more useless ones from previous games (apparently the four years that MC spent in cryo-sleep were long enough for the Covenant to realise how lame of a gun the plasma rifle was). 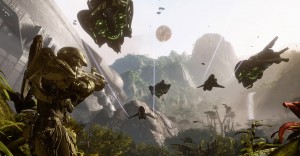 A new race of aliens means an entirely new aesthetic and feel to the new guns you come across, all of which are incredibly sleek and made of connected floating parts. Most of these cover a similar role to their human and covenant equivalent – the Scattershot is pretty similar to the shotgun, the Binary Rifle is essentially a sniper rifle etc – but it’s a nice injection of change into a catalogue of weapons that desperately needed it, and they all look incredible.

They even snuck in a few new human weapons for good measure, and separated the DNR and Battle Rifle into two separate guns.

Plus, like in Reach, Master Chief gets to finally make the most of armour abilities he forages from the Prometheans.

Jetpacks, stealth camo and a few more of the ones you’re already familiar with make a return here, with the addition of a few new ones that are fun to tinker with, both on and offline – including the ability to throw out a robot sentry turret, or the thruster pack, which is a similar, albeit more restrained, to the Convenant’s Evade. Good fun to be had here, and yet more ways that the traditional Halo formula is kept fresh and exciting. 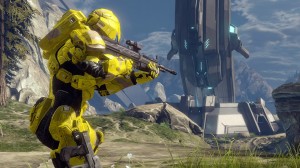 staggering change you’ll encounter with Halo 4 is the complete overhaul of the online multi-player, which can be a bit full-on if you’re not expecting it.

Gone are the days when players of all levels were treated equally, thrown into battles with one set weapon and the barest of choices available to them. Now, in the vein of Call of Duty and other level based online FPS experiences, increasing the level of your online character unlocks all manner of goodness, allowing you to constantly upgrade and tweak your character to suit your playing style.

Each character can have up to five (eventually, when you’ve unlocked them) load outs, with a choice of weapons, armour abilities, grenades and passive extra bonuses like faster recharging shields or unlimited sprinting ability.

Needless to say, this is a pretty big for the world of Halo online, as it not only means you can play the way you want to, down to the type of pistol you bring into battle, but it means everyone else can, increasing the pace and intensity of each and every online battle. 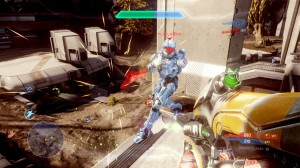 And if that wasn’t enough to at least make you curious, Halo 4 also employs the ‘care package’ reward style of weapon drop, where in collection kills in online matches earns you the ability to call in a weapons drop, giving you quick access to grenade launchers, needlers and all manner of high powered killing tools.

What’s great about this, when combined with the fact that when the maps themselves randomly spawn powerful weapons they get marked for everyone to see. Halo no longer favours the guy who has memorised the map and knows where all the best weapons are, but rather the best and/or most tactical player. It’s a pretty popular mechanic with other FPS, and it’s a good fit for Halo too.

I have to admit, I was skeptical of the creation of a new series of Halo games – I remember all too well what happened when they decided to make a new Star Wars.

I’m of the opinion that the earlier Halo games came pretty close to everything that specific sub-genre of FPS’s were ever going to achieve. And in a sense, that’s true. 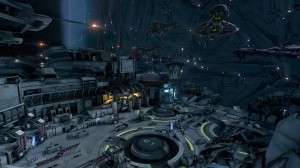 gameplay level, doesn’t offer anything ground breaking. Instead, it takes all the best elements of every Halo game ever, and adds in some of the better things the rest of the genre is doing, and combines with the most engrossing, legitimately powerful story the franchise has ever offered, amazing visuals and a downright incredible multiplayer experience.

If 343 Industries can keep this up, we’re looking at one of the greatest gaming franchise of all time.