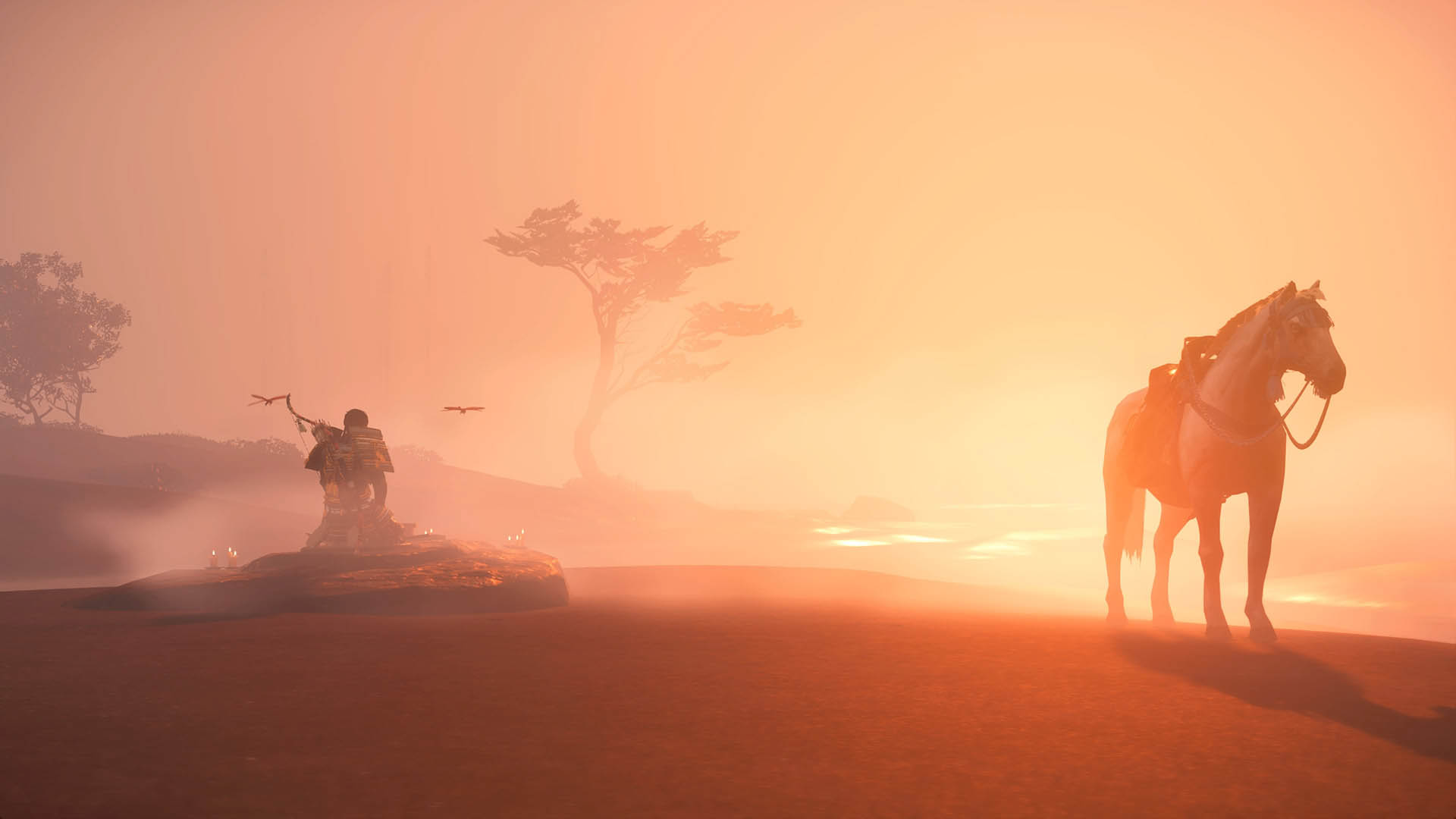 Sucker Punch Productions’ highly anticipated samurai action-RPG, Ghost of Tsushima, is now out in the wild. We go for a walk amongst the cherry blossom, katana at the ready.

There are not enough games that draw on the legendary warriors of feudal Japan for inspiration. The tales of noble, honour-bound warriors are almost made for video games. Apart from Bushido Blade, with its unforgiving combat, no third-person game has really done the era justice.

Ghost of Tsushima propels players into the conflict between the inhabitants of the Japanese island of Tsushima, and the invading Mongol army. With the defeat of the samurais at the hands of the Mongols, players take on the role of the lone surviving samurai, Jin Sakai. In order to liberate the island, Jin must learn to forgo the proud fighting style of the samurai and adopt techniques that conflict with the teachings of his master. 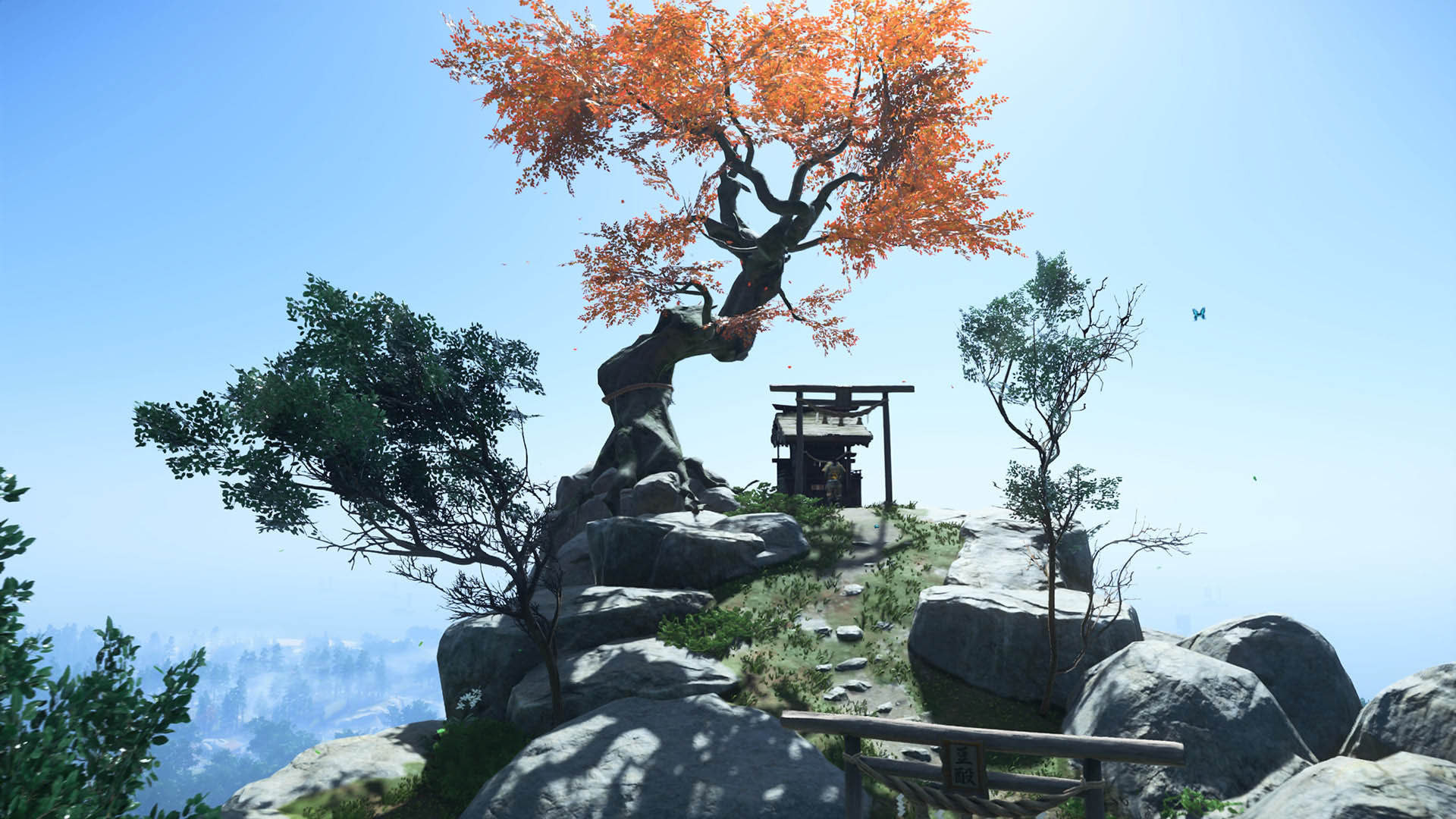 The developers have cited legendary Japanese film-maker, Akira Kurosawa, as one of their inspirations. I couldn’t tell you if they have succeeded or not, as the closest I’ve come to a Kurosawa movie is Battle Beyond the Stars.The game does have a certain cinematic flair in the set-ups for duels and stand-offs.

The plot is epic and advances via missions referred to as Jin’s Journey. There are also other tales that players can partake in. These side-quests are not only fulfilling stories on their own, but also reward players with ability points and upgrades.

The game features a unique and very clever method to allow players to follow set waypoints to missions and areas of interest. Swiping up on the touchpad generates a breeze that, if followed, leads to the waypoint.

During his journey, Jin will come across inhabitants that disclose additional tasks for him to investigate. The appearance of a yellow bird also signifies the nearby presence of and activity. Following the bird will lead Jin to the location. 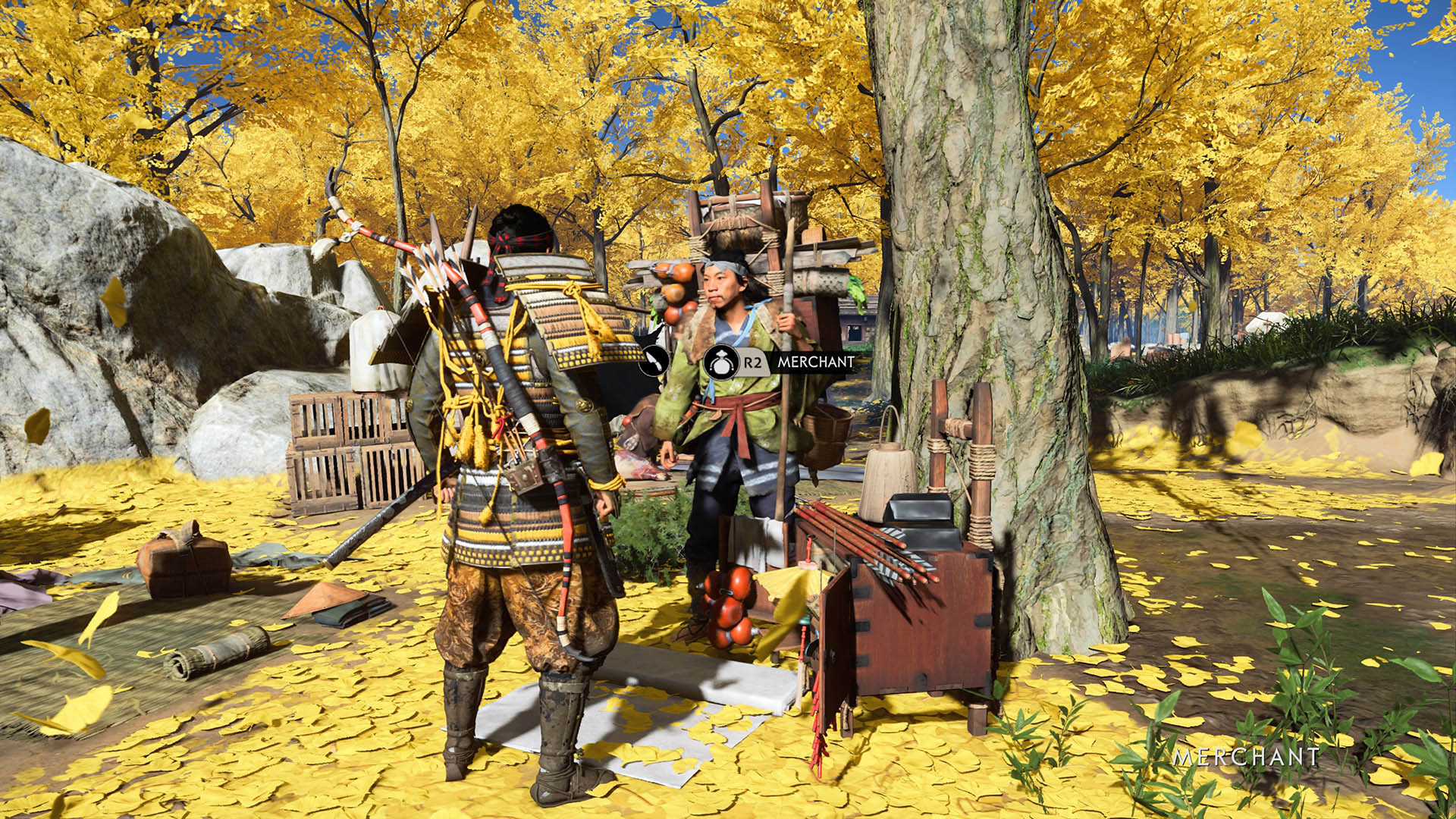 Completed activities unlock fast travel points. These are very useful to cross a world as large as Ghost of Tsushima’s. It is fun, however, to take in the scenery whilst riding on horseback, and dealing with the random encounters on the way.

The island of Tsushima is peppered with Mongol occupied territories. These areas can be liberated by eliminating the Mongol garrison. Most important, are the Mongol leaders. Observing Mongol leaders during training and killing them grants Jin a point towards unlocking extra stances. These stances, Stone, Water, Wind and Moon, are most effective against swordsmen, shieldmen, spearmen and brutes, respectively.

Combat is the core of the game. The game does a good job of slowly introducing players to the difference stances, moves and weapons. 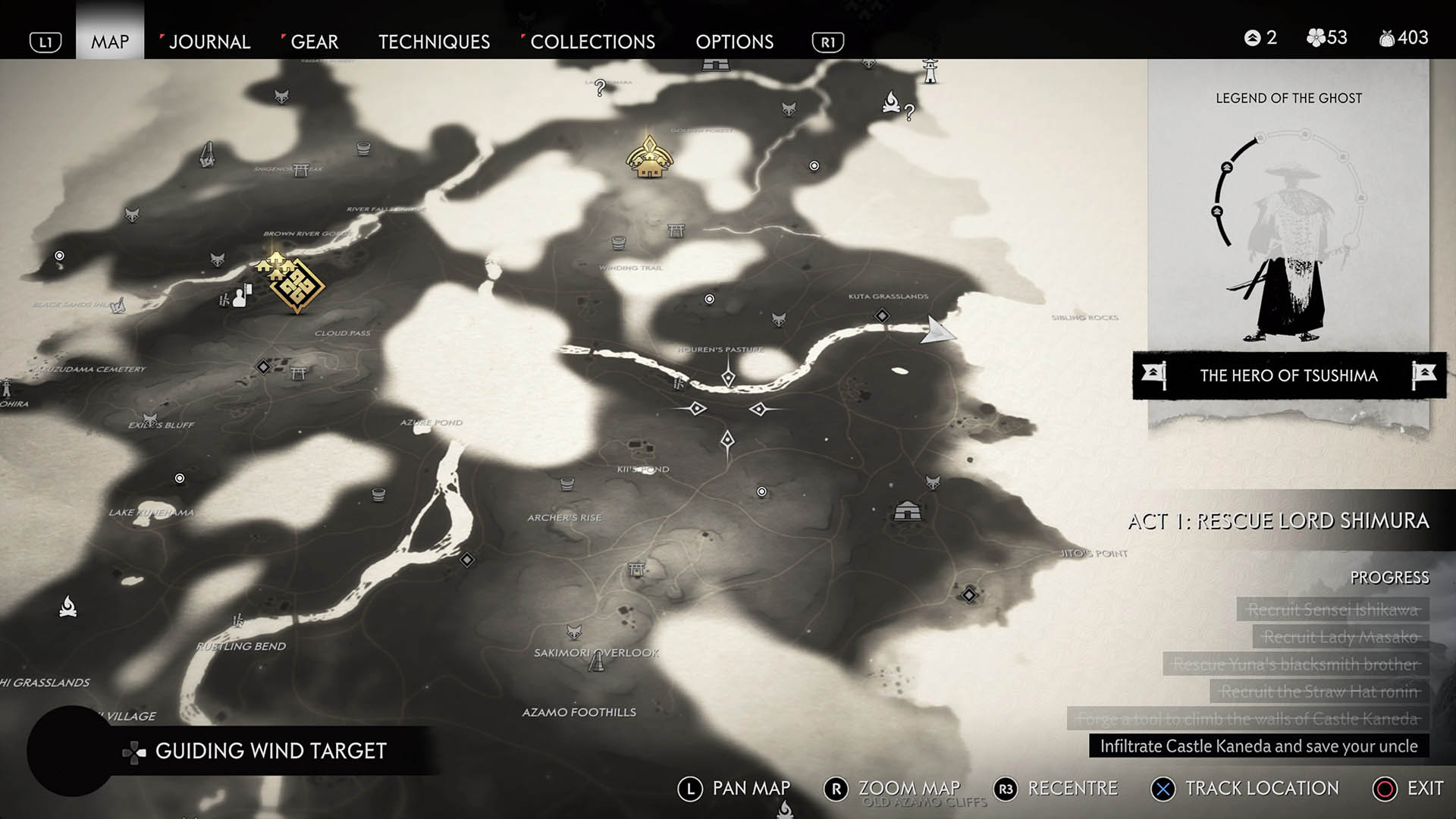 As well as upgrading stances, technique points can be spent on new samurai abilities, allowing new strikes and parries. There are also ghost weapons, which are more like those of a ninja than a samurai, like smoke, sticky bombs and throwing blades.

Jin has a choice on how to engage enemies. The samurai way, to honourably and directly approach the enemy allowing for the opportunity for a standoff, I found to be the most rewarding. The alternative is to sneak up on the enemy and dispatch them from the shadows, which is in some cases safer, if done properly.

The standoff mechanic requires players to press and hold down the triangle button, only releasing as the enemy goes to strike. Mis-time the button release (enemies sometime feign their attack) and Jin will take damage and have to fight as normal. Get it right and the opponent is killed with one strike. Later on, these one-hit kills can be chained after a successful initial standoff. 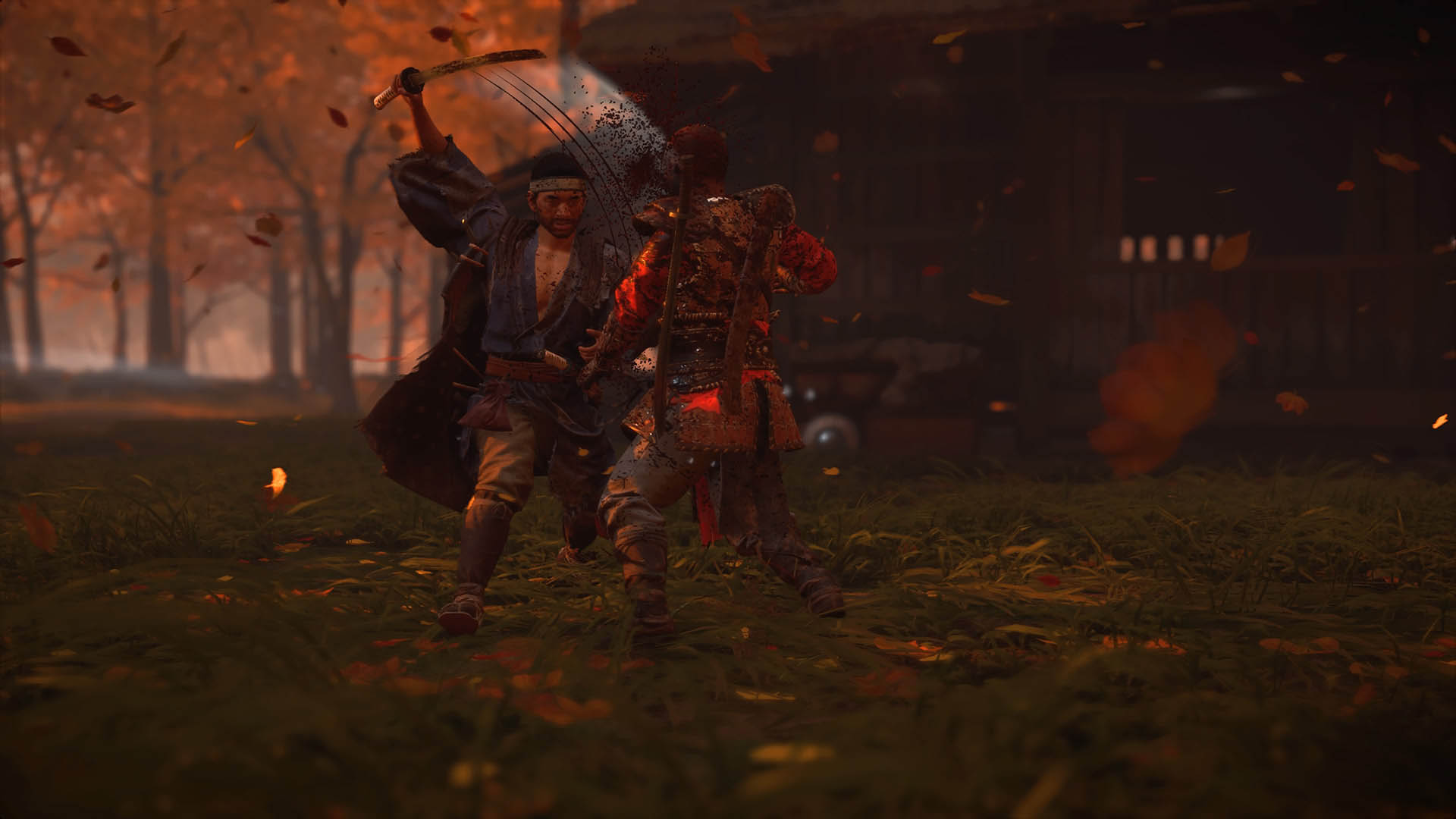 Health is dealt with by resolve indicators which are refilled with each successful kill. Jin heals himself with a very samurai-like beat of his chest. Performing bamboo strike activities increases the amount of resolve Jin has.

Equipment upgrades are reliant on collecting the raw materials which can be found in buildings and on the bodies of fallen enemies. The various settlements have craftsmen that can used collected materials to improve Jin’s weapons and armour.

I was expecting the combat to be a little more disciplined, something either like For Honor or (dare-I-say-it), Dark Souls. Combat in Ghost of Tsushima mainly involves blocking and countering, dodging unblockable strikes and carrying out heavy and quick attacks. The reality is a lot of rolling, backstabbing and copping hits. 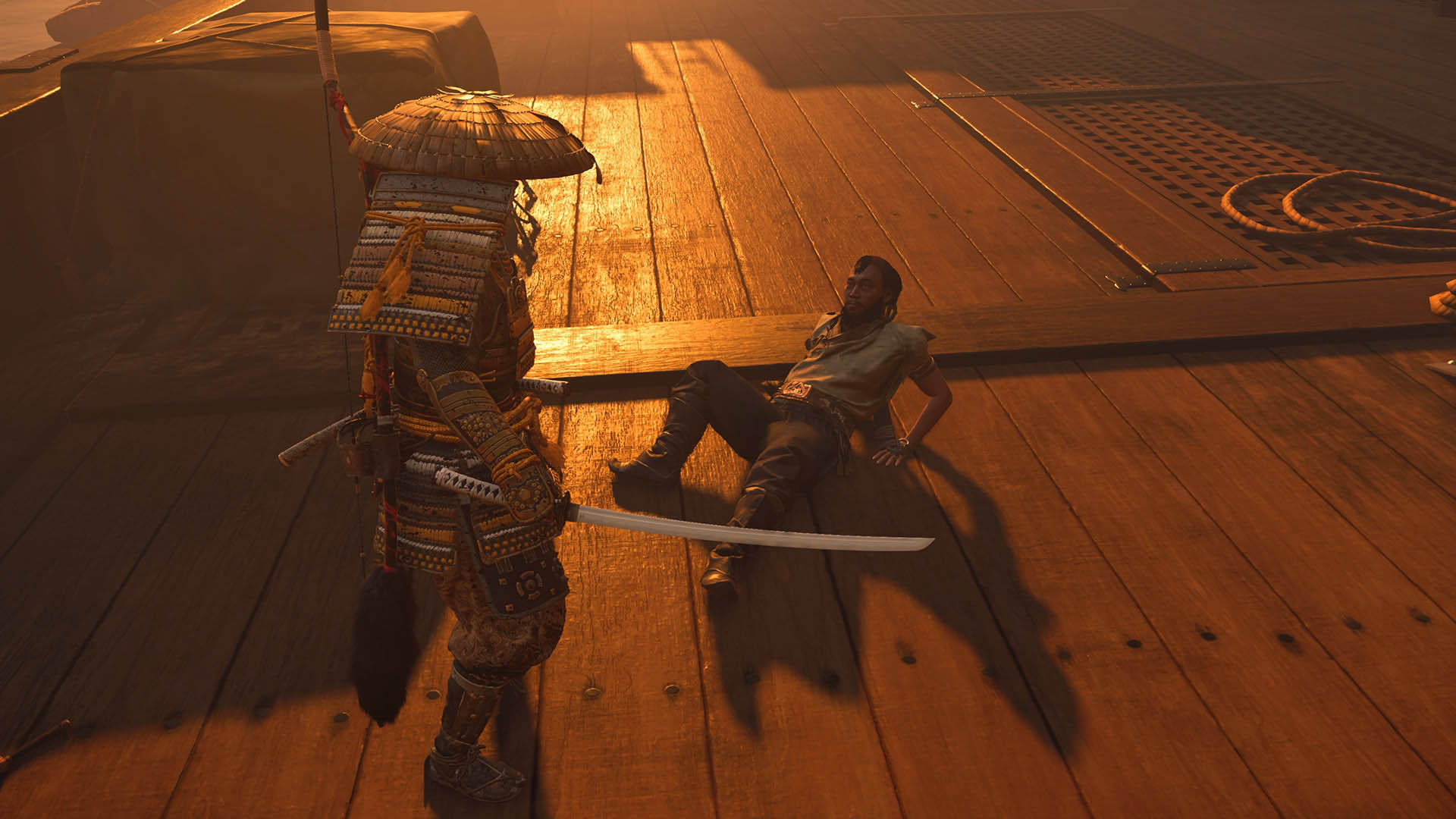 I’m not say that the combat isn’t fun, but I’d say that it wasn’t as fun Assassin’s Creed or even Shadow of War, for that matter. The addition of the bows, smoke and bombs make things a bit more interesting. It’s only by the end of Act I that the combat really starts to gel and enemies get tricky enough that you have to start thinking a bit more about your strategy.

The game does suffer a bit from the same open-world “lame activity fatigue” as found in Ubisoft’s Assassin’s Creedtitles and Sucker Punch’s other franchise, Infamous. A lot of the activities and challenges, away from the main quests and side misisons, are a bit samey.  As with the Infamous games, though, the story is good, the cast of characters is interesting and the world very nice to look at. 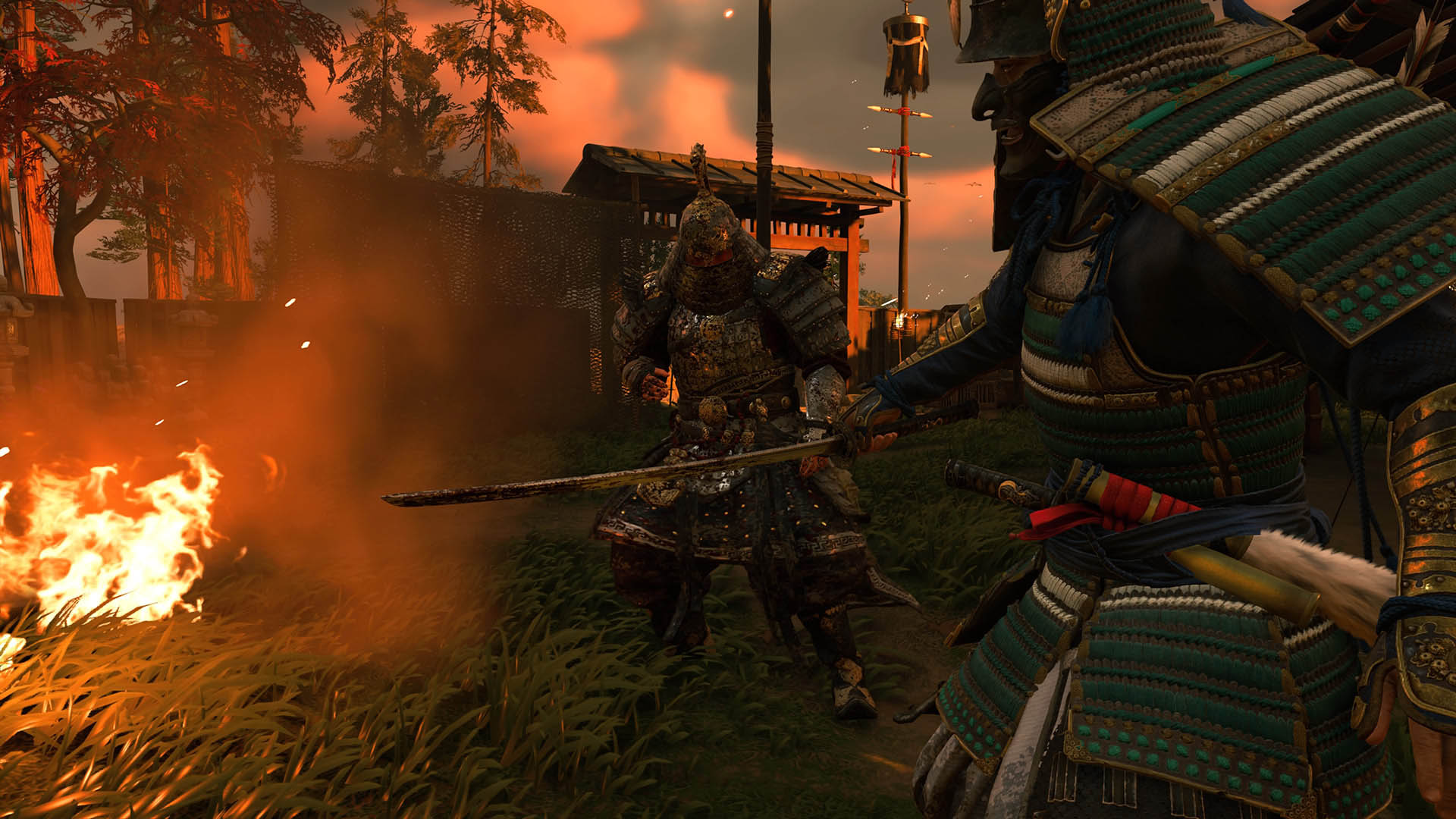 The landscape is full of flowered fields and vividly-coloured trees that make for a beautiful backdrop to the ensuring carnage. This, along with some wonderful environmental effects makes the game stand out.The included photo mode is a massive distraction as you’ll want to capture a lot of these idyllic scenes for prosperity.

Ghost of Tsushima does a very good job of bringing the legend of the samurai to life. The visuals are great and occasionally breathtaking.

This is a game most definitely worth a punt, it’s fun to play and looks nice, but it is not perfect. Go in with this in mind and you’ll have a great time in Feudal Japan, fighting back the Mongol Horde. 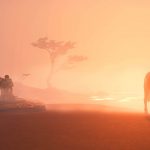 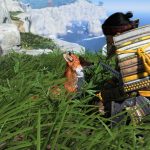 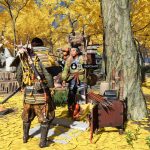 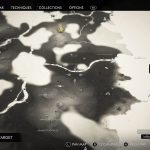 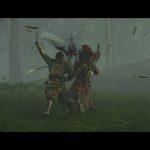 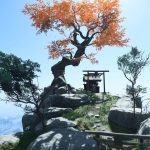 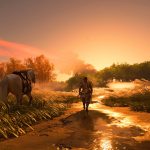 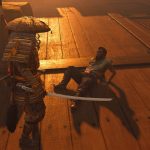 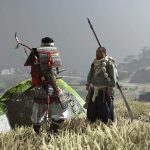 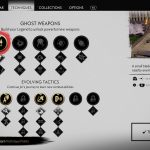 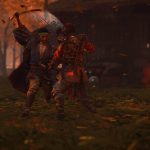 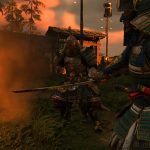 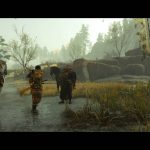 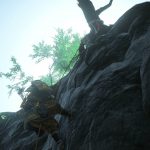