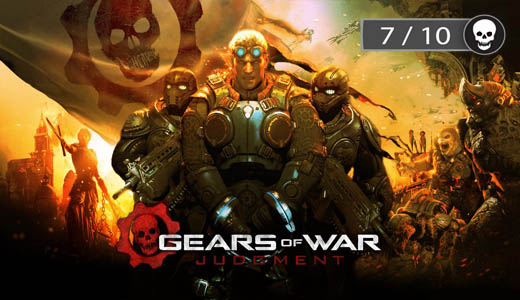 If you made the claim that Microsoft was flogging a dead horse by deciding to do Gears of War: Judgement, you wouldn’t be 100% correct. Let’s just say, the horse isn’t dead, but if the otherwise impressive Gears of War series didn’t have a weak link before, it does now.

Gears of War: Judgment takes place around Kilo Squad (before the events of the original Gears of War), as they stand trial in the middle of a locust attack for a originally unidentified war crime.

Kilo is lead by Gears mainstay Damon Baird (who was everyone’s favourite NPC, according to everyone around me while playing this game) and a collection of rag-tag stereotypes – the returning Augustus ‘Cole-Train’ Cole, an uptight and somewhat two-dimensional female soldier who seems to exist purely to tick a gender role, and a gruff, disfigured Russian dude with a chip on his shoulder and a dark past. 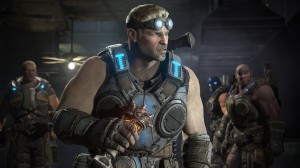 Hardly anything particularly ground-breaking in the field of action – they even manage to be less interesting than the ultra-macho characters of the main series. I mean, sure Dom was whiny and annoying, but at least he had a point. There’s noble wife-saving quest here, just one-liners from Kilo that get tiresome pretty quickly.

As you proceed through each of the characters testimony at the trial, flashbacks unveil the events that led up to the supposed war-crime.

Here you fill the shoes of each major character one at a time, which while momentarily interesting, adds to the biggest problem that Judgement has – a sense of dislocation. Unlike previous Gears games, Judgement works on a system of mission ranking, where you are awarded one to three stars based on mission segment performance – determined by kills, executions, rarity of getting downed etc.

These stars can be earned more quickly by activating the Crimson Omen represented ‘Declassified sections’ at the start of each mission, which add a special, unique challenge to that segment be it a time limit, an extra wave of guys, or a gas in the air that leaves your character half stoned and unable to see properly.

This is actually a great mechanic – adding an extra level of challenge to the main Gears campaign, but unfortunately, it divides every major section of the game into several smaller mini-chapters, removing any sense of cohesiveness between sections and killing any momentum you can possibly build up. 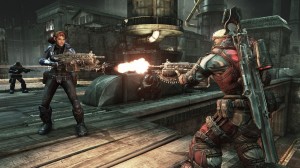 What it feels like, really, is a DLC addition that could have existed perfectly fine in any of the other Gears games.

Unfortunately, none of the other new additions to Judgement are anywhere near this appealing. Aside from the odd new or slightly tweaked weapons, pretty much all of the additions seem really lazy. There is one major new enemy – a charging brute you can only really hurt with head-shots, and is genuinely fun to kill – other than that there’s nothing that’s really even worth noting.

The game itself – even with a second unlockable campaign, focusing on what Baird and Cole got up to during Gears 3 – only lasts about seven or eight hours, so you’ll be looking to put some serious miles into the Multiplayer to get your money’s worth from this title. I won’t go on too much about the Multiplayer here, because you’ve probably played it all before. Deathmatch, King of the Hill etc, etc. Nothing’s changed here, and that’s a good thing.

When talking about this game to people, the word I so often found myself using was ‘fine’.

At its core, it offers the same fundamental experiences the original three games did – an incredibly solid, violent, visceral third person shooter, with guns with freakin’ chainsaws on them.

However, if you start looking beyond that, especially compared to Gears 3, the product is sort of underwhelming.

You can’t help but feel that everything about the series that made it unique has been stripped away – in a mass move towards a more bland, mainstream title. The gun select wheel, for example, has been replaced a simple Halo-style main weapon/secondary dynamic, and long, flowing engaging missions have been replaced with short, sporadic mini-missions. 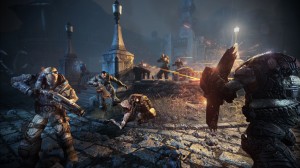 What’s perhaps the most disappointing is the injection of Horde mode into the Main story, as if the developers are trying to lengthen out segments of the game they couldn’t flesh out in any other way.

Everyone liked Horde mode in Gears 2 & 3 – it was a great, fresh addition to the series, but when you’re forced to play it in the single player campaign, it really feels like a cop-out, and removes from the realism and grittiness that Gears is usually known for.

The long and short of it is this: nothing that new Developers; People Can Fly have bought to the table for this game is anything spectacular.

Luckily, the fundamental basics of Gears have meant this is still a game worth playing.

The Multiplayer is still as addictive as ever and encourages that ‘one more round’ mentality that Game Developers everywhere need to strive for, and it looks damn good too.

If you’re a fan, or looking for a average-to-good action game to kill a few days on, Judgement might just do the trick perfectly.